I was thinking of revisiting games from other consoles, but when I saw The Flash for the Nintendo Game Boy, I couldn’t help but try it. I remember seeing ads for this game in comic books when I was younger, but I never really saw it get reviewed in video game magazines. Around that time, I was also a big fan of The Flash TV series that aired in 1990, so I know I wanted this game even back then.

In addition to me being a fan of the character at some point in my youth, I was also drawn to this game for another reason. Most video games from this era are based on either Batman, Spider-Man, or the X-Men. It was rare to see a video game based on a different character, so I really wanted to check this one out. 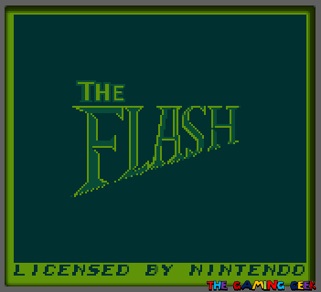 Title screen for The Flash.

The Flash is an action platformer with an interesting twist. Instead of defeating the bad guys by beating them up, your main objective in each stage is to defuse explosives planted by The Trickster. Depending on the stage, you are given between three minutes to a minute and a half. There are enemies that try to hinder you, but you don’t really need to fight them.

Your main objective is to defuse these explosives at the end of each stage.

True to the TV series, the Flash has to worry about his stamina a lot. In addition to a health meter, you have a stamina meter as well. This stamina meter depletes whenever you use his special moves. Pressing A + B together with left or right makes the Flash dash for as long as you hold the two buttons or you have stamina. Pressing just A + B will result in a spinning attack that protects the Flash from both sides.

Stages are mostly horizontal, but can now pan up a little vertically. The game doesn’t make a lot of use of this though, being played mostly between an upper level and a lower level. Unlike most platformers of this era, The Flash also allows you to backtrack.

In the TV show, the Flash needed to eat sweets in order to replenish his stamina quickly. The game references this by having money power ups which you use to buy pastries via vending machines scattered across the stages. Meanwhile, enemies drop health refills when defeated.

The Flash only has a few power ups, but each one is relevant to the game experience.

Another powerup that emphasizes speed and quickness are these black bombs. If you manage to defuse them, they will also drop health refills. But if you get caught in the blast radius when they explode, your health will be depleted almost completely.

It’s difficult to avoid taking damage as you make your way through the stages, so you will need to decide between making a run for the explosives or refilling your health by beating up bad guys or defusing the bombs. The game emphasizes the need to choose by not refilling your health as you progress to the next stage. Whenever you die, you lose a life and get sent back to the beginning of the stage.

The three train stages are my favorite parts of The Flash.

The train stages need a special mention. In those stages, the explosives have been placed on moving trains. So you, as The Flash, will need to race after them. There are no vending machines in these stages, so you need to manage your stamina wisely in order to make it.

Finally, the developers snuck the password system into the game so well, I didn’t even know it had a password system. Before each stage, The Flash is going to specifically mention the address where he’s going. That’s actually the password to that stage! I didn’t read the game’s manual, so I didn’t know it right away.

For the most part, I like the graphics of The Flash. The Flash himself is drawn nicely, although it’s hard to tell details when he is moving or attacking as the animations are quite fast. Normal enemies are detailed enough for me to be able to tell them apart. Stages and backgrounds are quite detailed too, although the stages themselves look quite generic. Maybe I’m not recognizing any of them because it’s been decades since I’ve seen episodes of the TV show.

Because this was hidden in the dialogue, I didn’t realize that the game was already giving me passwords.

Sprites for the main bad guys though, aren’t that good. It took a while before I was able to recognize the Trickster. The intro dialogues before each stage referenced Mirror Master, but I’m not sure if I came across him in any of the stages. Near the end, I know Captain Cold was there but only because the enemy was shooting frost-like bullets. There’s an enemy that shoots darts, I’m not sure if that’s supposed to be Nightshade.

I thought the game’s music would be great because the title screen used Danny Elfman’s TV show theme. Sadly, this isn’t the case. Aside from the stage music sounding generic, I think THQ’s programmers didn’t know how to use the Game Boy’s audio technology. The music had a lot of beeps and hisses that other games don’t have. I would turn down the volume on this one.

Typical of action platformers, you use the D-Pad to move the Flash. However, Up makes the Flash jump and climb up ladders. The developers did this because the B button is for punching and the A button is for kicking. Why does the Flash need two attack buttons? Because punching defuses bombs and explosives and also operates the vending machines.

I completely disagree with this design choice. Pressing Up to jump often feels clunky in platforming games. And it makes climbing ladders harder than it needs to be. If you’re not perfectly aligned with the ladder, you end up jumping and losing time. The drawbacks of this choice isn’t needed, because kicks are way better than punches as attacks in this game. Why not assign defusing and operating the vending machine to the Up button instead? 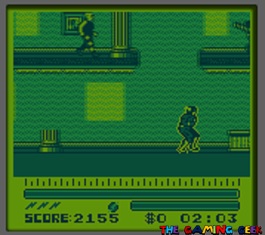 Expect to run into all sorts of different problems when you’re this close to the edge of the screen.

Another flaw of The Flash is having him too close to the edges of the screen when he is running. Because of this, you have barely enough time to react to enemies or worse, pitfalls, when they appear. Remember, dying sends you back to the start of the stage so it’s annoying when this happens. Combining this with the need to press Up to jump makes reacting to pits even harder. Instead of using fast reflexes, you will need to memorize the layout of each stage.

I feel bad for this game. The concept of the game is brilliant. How would a guy like The Trickster beat the fastest man alive? Planting explosives all over the city to try and tire him out is a reasonable plan, and that’s what this game revolves around. This game should have been great, but the combination of lackluster stage design, inconsistent graphics quality, bad audio and questionable design flaws resulted in a mediocre video game.

I did appreciate The Flash though. Despite it’s flaws, I like how it approached platforming differently. Having a password system means I’ll be able to revisit the stages that I really enjoyed playing.