As I wrote here, I was really looking forward to playing Super Mario Land when I first received my Game Boy. And I was a little disappointed when I realized that it wasn’t a port of the famous Super Mario Bros. on the NES/Famicom. But that disappointment quickly faded because Super Mario Land is a really good game too.

I’ve been wanting the chance to be able to play this game again, but Nintendo hasn’t made the game available on the Nintendo Switch. I almost bought a Virtual Console version on my Nintendo 3DS, but I held off because I didn’t think it was worth the price, especially since I’ve already moved on from that device. 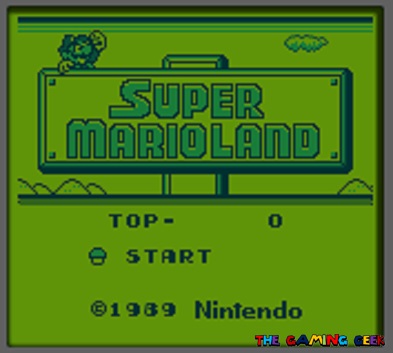 Thankfully, I managed to get an Anbernic RG350P and was able to replay Super Mario Land recently. Here’s what I think about it today.

Super Mario Land plays quite like Super Mario Bros. in that it is a platformer. Even Mario’s sprite looks quite similar to its NES counterpart. The game has similar power ups, but it has the Superball Flower in place of a Fire Flower. Mario also doesn’t have as much inertia so it doesn’t take a lot of effort to get him moving and he stops almost on a dime.

I actually prefer Super Mario Land’s mechanics compared to it’s NES counterpart. The lack of inertia makes the game’s platforming more accessible for me. I rarely miss jumps here compared to Super Mario Bros. And it did take a while to get used to the Super Ball power because unlike Mario’s standard fireballs, the Super Ball bounces against surfaces and is able to collect coins. Since Mario tosses these at a downward 45 degree angle, you can effectively aim it and hit enemies at higher elevations.

Super Mario Land is often criticized for it’s length, especially compared to Super Mario Bros. The former has eight total worlds with four sub-stages each. Meanwhile, Super Mario Land only has four worlds with three sub-stages. I understand why the game is so short – this was meant to be played on a device powered by four AA batteries so without passwords or a battery backup, it was designed with short play sessions in mind.

To mitigate the reduced number of stages, there are no shortcuts in Super Mario Land. I think everyone who plays Super Mario Bros takes the warp zones and skips through the majority of that game’s stages anyway. In any case, if you want to get more value out of Super Mario Land, you have the option to play Hard Mode after beating the game.

Even though the game is shorter, I like Super Mario Land more because it felt less repetitive. In Super Mario Bros., I felt like I was exploring different areas of the Mushroom Kingdom. All different areas, but from the same world. So it was a cycle of overworld, underground, a castle stage, and the occasional underwater stage.

The small details added in the stage backgrounds help sell the idea of exploring different worlds, despite the lack of color.

In Super Mario Land, each world represented a different kingdom. Each kingdom comes with different-looking backgrounds and is accompanied by different groups of enemies. The first world, for example, is based on an ancient Egyptian setting. You see this in the pyramids in the background and hieroglyphics in the castle stage. You face sphinx-like enemies, including a big one as the final boss.

Speaking of bosses, I also like that you face a different boss at the end of each world. Mechanically, they serve a purpose similar to Bowser, but the different look and feel helps sell the idea that you are exploring different worlds.

Adding to the feel of exploring different worlds is the inclusion of Gradius-style stages that automatically scroll to the right. In these stages, Mario is either manning a submarine or piloting an airplane. Mechanically, both stages are similar but the visual details do give a slightly different feel.

While there are only two of them, the placement of these stages are quite ideal. The submarine level is the last sub-stage of world 2, which is right in the middle of the game. The airplane level serves as a bookend at the end of the game. Not only spread apart, these stages lead into boss battles, making those as varied as possible.

No Cheese, All Challenge

What, you ask, are the unfair mechanics in Super Mario Bros? There’s that long stretch somewhere between World 7-3 and World 8-3 wherein you can’t get any Mushroom or Fire Flower power ups. There are those sections in some of the castle stages that loop endlessly if you go the wrong way (or down the wrong pipe). There’s that blasted jump in World 8-1 (Mario vets would know what I’m talking about). The series of Hammer Bros. in World 8-3. And so on.

Extremely challenging games have a place in video gaming, but that’s not necessarily in the hands of a kid. Games like Celeste, Hollow Knight, Viewtiful Joe, and Super Mario Bros are for people who are playing video games to test the limits of their skills. I enjoy games with a moderate challenge, games that make me feel good when I beat them.

A Small But Better Reward

The one reason that will always make me want to play Super Mario Land over Super Mario Bros is the ending of the game. To be frank, the ending of Super Mario Land is very simple – Mario saves Daisy and they fly off in a space ship. But man, the theme that plays during the end credits is soooo good. Here’s a video of it from Youtube so you can listen to it yourself.

I remember playing Super Mario Land all the way to the end several times just so I could listen to the ending theme. Nowadays, you can just download a rip of it from the internet. But when I was a kid, there was only one way to listen to this – I had to beat Super Mario Land. And I did that happily, over and over.