While looking for some Ghostbusters titles to feature, I was surprised to see Ghostbusters II for the Game Boy. I’ve always been a fan of the franchise. At the time of this writing, the new Ghostbusters movie (Ghostbusters: Afterlife) is nearing it’s release date. So, I finally decided to give the one released on the Game Boy a go. 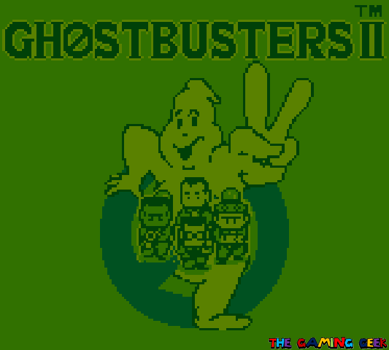 Title screen for Ghostbusters II for the Game Boy.

Let’s talk about my experience with Ghostbusters II!

Ghostbusters II is a top-down action game that was developed by HAL Laboratory and published by Activision for the Game Boy. In this game, you can choose to play as any one of the four different Ghostbusters. You’ll also have to choose who your partner is going to be. This doesn’t have any impact on the gameplay though. And in the middle of the game, you’ll be able to swap to the others. 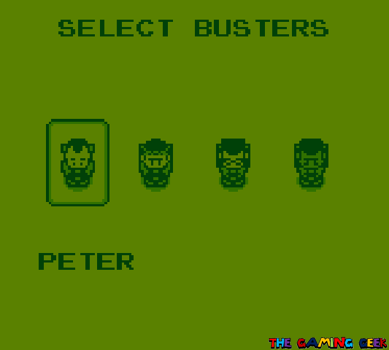 You can choose to play as any of the four Ghostbusters in this game.

Stages are divided into different floors. Your partner will tag along with you and will try to keep up. You’ll need to clear each of the regular floors of ghosts completely to advance to the next one. A number at the bottom right of the screen will tell you how many ghosts are remaining on your current floor. Each floor also has a time limit. When this runs out, all the ghosts on that floor will turn into Ghostbuster logos, which are fast and are constantly on the move. It’s a lot harder to catch ghosts when this happens. 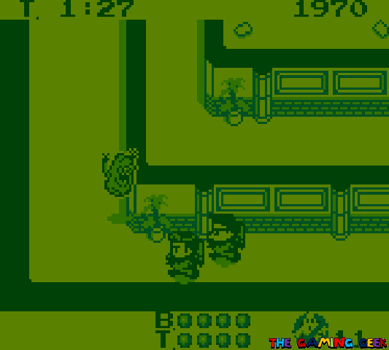 Yes, I forgot to move my watermark and ended up covering the ghost counter.

One hit from a ghost will kill you or your partner. Both characters have their own count of lives, and you start the game having four for each. You can get extra lives in the game, but the counter will only show a maximum of five. When you or your partner lose all lives, you’ll need to use a continue in order to proceed. And there are only three continues. The game does not have a password system nor a save system, so you’ll need to beat this game in one go.

Ghostbusters II is actually pretty simple. Like I said earlier, you can only control your character. You move your character with the D-Pad, and you can walk in all eight directions. Pressing the A-button fires a proton stream. This proton stream has a limited range and only fires forward in the four directions – you can’t shoot it diagonally. 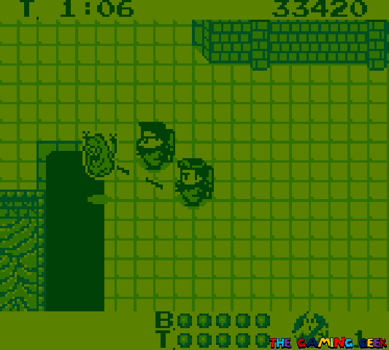 Step 1: Hit a ghost with a proton stream. 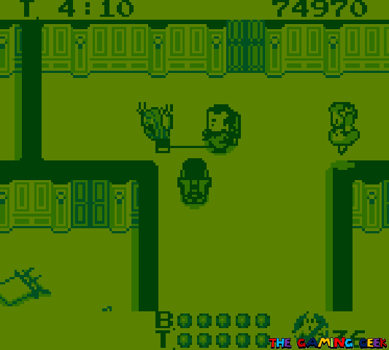 Step 2: Catch the ghost with a ghost trap!

To catch the ghost, you’ll need to use a ghost trap. And that’s your partners role. Pressing the B button makes your partner toss out a ghost trap. He can only throw the trap in the four main directions. What makes this tricky is that you don’t control your partner’s movements. So you have to move your character around and hope that your partner eventually moves close enough and is facing the right direction when he tosses that trap.

While moving around, your proton stream tether might break. Not to worry, because as long as a ghost is stunned, the ghost trap will catch it. If a ghost recovers, you’ll need to stun it again with another proton stream before you can try to trap it. 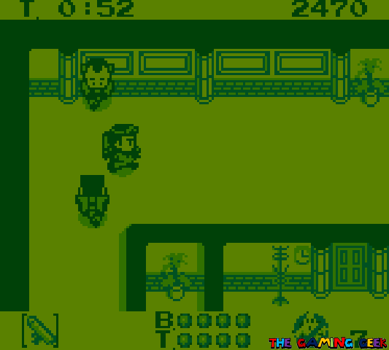 The Slime Blower is actually from the Ghostbusters II movie. When you get this, you shoot out slime instead of proton streams. This positively-charged slime kills any ghost that it hits. You’ll lose this after a certain amount of time, so you’ll need to maximize it. 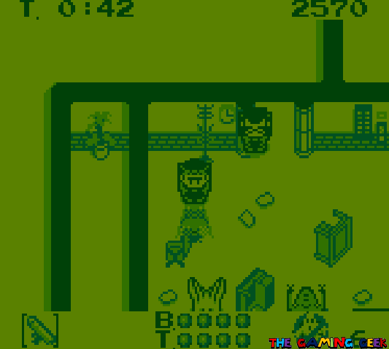 I don’t have the game’s manual so I’ll have to make up names for the rest. The “Super Trap” stuns all the visible ghosts in the level. And instead of a proton stream, you’ll toss out ghost traps. Since all the ghosts are stunned, you’ll immediately catch them. 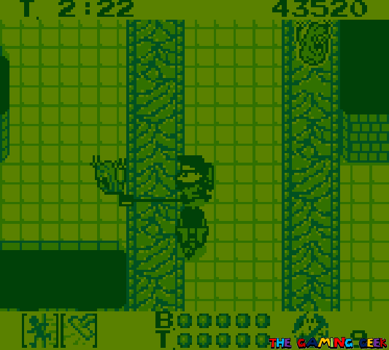 With the “Super Trap”, you won’t even need your partner’s help.

The Pickaxe simply allows you to destroy walls and open up shorter paths for you. This power up allows for three uses, so choose which walls to destroy wisely. 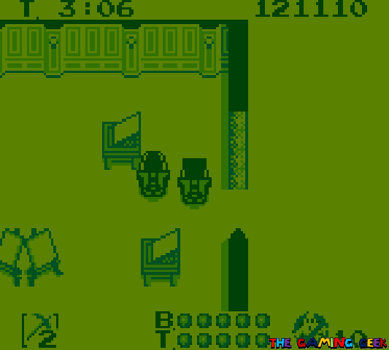 Use the Pickaxe to destroy walls and create shortcuts.

Finally, the Intangibility power up makes you intangible. I can only remember one floor where I got this on and it allowed me to walk through water barriers. The icon suggests intangibility so I’m calling it that. 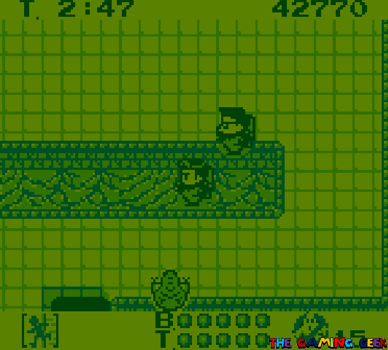 The icon looks like a guy walking through a wall, right?

Swapping doesn’t really have any effects on gameplay, but I liked it. Thematically, it was nice to see the Ghostbusters tagging in and out of the game, making sure that each member had sufficient time in the spotlight.

It’s a good thing that HAL Laboratory changed up the game mechanics for the boss battles in Ghostbusters II. You’re still controlling one Ghostbuster, and you still have a partner tagging along. The first major change is that your partner now has a permanent barrier, preventing the boss from killing him. And that’s a good design choice because it’d be frustrating to watch your partner keep getting killed because you couldn’t control him. 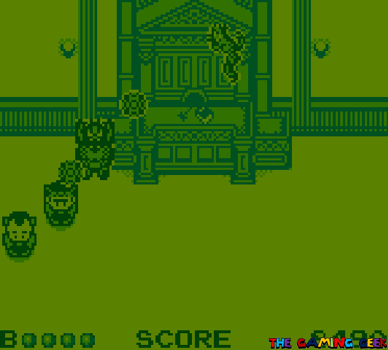 Use your partner as a shield during boss battles.

It also adds a new strategy – using your partner as a shield against projectile attacks. Instead of shooting out proton streams, you also shoot a different type of projectile. As the boss battle continues, power ups will drop to help you. The Heart power up gives you one unit of health. The B power up will give your character a temporary shield. And the W power up will allow your partner to shoot projectiles too. 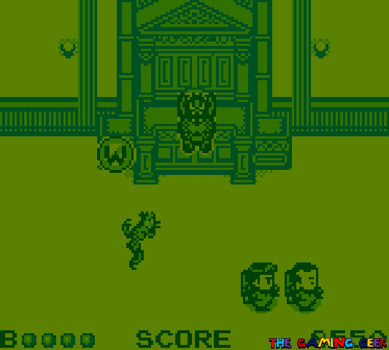 Make sure you catch the dropping power ups during boss battles.

These boss battles are a good way to change the flow of the game. These all boil down to dodging your enemies attacks, using your partner as a shield if possible, while trying to hit them with your own attacks.

I liked the graphics of Ghostbusters II a lot. Even though the developers were working with limited tech, they managed to make each Ghostbuster member recognizable. Each ghost type is also quite detailed and it’s easy to tell them apart. Slimer is also definitely recognizable. The stages seldom felt empty, although the last level did feel a bit repetitive. 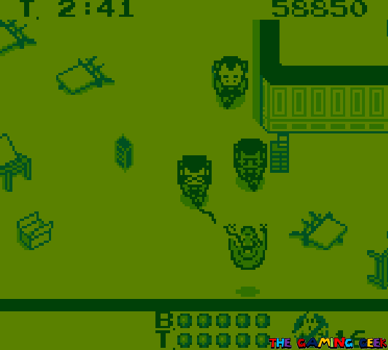 Can you identify the three Ghostbusters in this picture? 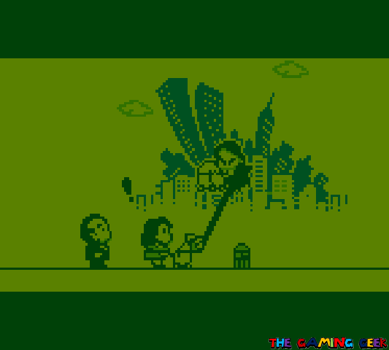 You need to save Dana’s baby in this game.

In terms of presentation, the game is lacking a little polish. The HUD is a little bare, and the character selection screen could’ve used a little more graphical assets to make it look better. You do get some cute cutscenes in between levels to move the game’s story along, which helps. It doesn’t make the game bad, but the game could’ve looked a lot better with the added polish.

Despite the limitations and the simplicity, I had a great time with Ghostbusters II. It feels like a real Ghostbusters adventure. You pair up and work with your partner to catch ghosts and you occasionally tag with the rest of the team. You catch ghosts in the way they would catch ghosts; by stunning them with proton streams and trapping them.