My earliest memories with Castlevania are with Castlevania II: Belmont’s Revenge on the Nintendo Game Boy. I had a chance to play it because a friendly kid at the doctor’s office lent me his copy while we both waited for our doctor to attend to us. And I had such a good time with it, that I still remember parts of the game even if I never played it again since. 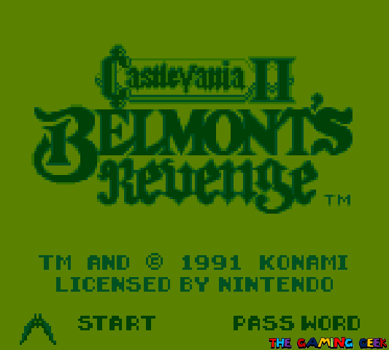 Even though I wanted to put off playing Castlevania games for much later, I decided to revisit this one early. So let’s talk about this memorable title.

Castlevania II: Belmont’s Revenge is an action platformer developed and published by Konami. In this game, you’re playing as Christopher Belmont, the returning protagonist of the first Castlevania game on the Game Boy. Fifteen years after Christopher’s first adventure, Dracula is attempting a comeback. He kidnaps Christopher’s son, intending to use the latter’s mystical powers. Playing as Christopher, it will be your mission to save the young Belmont and destroy Dracula once again.

This game is essentially a bite-sized version of the original Castlevania for the NES, but it changes up the formula a little bit. You get a Stage Select feature here, which is tied to the game’s plot of having four strange castles appearing out of nowhere. You can do these castles in any order, and beating all four will make Dracula’s main castle appear. 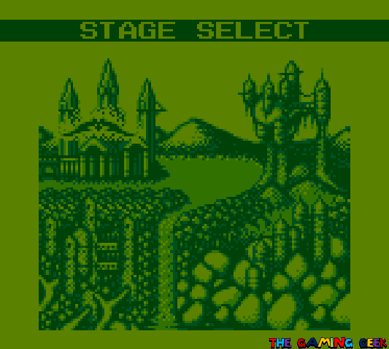 Take on the four new castles in any order!

You get a health meter as well as a number of lives. There are health refills and extra life power ups, but they’re quite rare and are hidden in walls instead of the usual candles. You also get extra lives when your score hits specific thresholds. As far as I can tell, the game has unlimited continues. It also has a password system for saving your progress, but you can only get passwords after you lose all your lives. So if you’re in the middle of a playthrough, you can’t just stop and continue later.

Christopher Belmont brings with him some expected moves and weapons in Castlevania II: Belmont’s Revenge. He can walk to the left, right, and jump. He’s got the ability to crouch in this game. His primary method of attack uses the Vampire Killer whip. 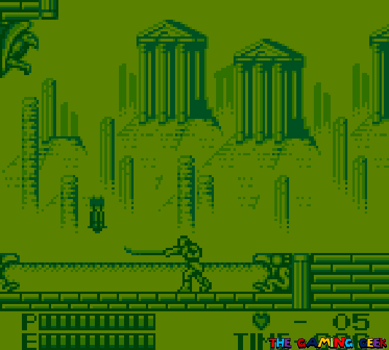 The legendary Vampire Killer is quite weak in it’s default form.

This whip can be upgraded twice. First, it becomes a chain whip with a ball at the end. It’s range is a little longer and it deals more damage. The second and final upgrade level allows it to shoot fireballs. However, you can only shoot one fireball at a time. 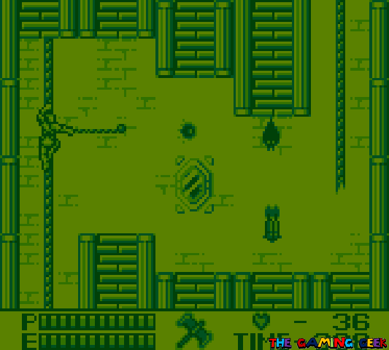 Being able to shoot fireballs can be quite handy.

For some reason, Christopher only has two secondary weapons in this game. You can choose between the Throwing Axe or the Holy Water. Using either costs one heart. Both items have their own advantages and disadvantages. You throw the Axe upwards and it follows an arcing path, which makes it really good for hitting enemies that are above you. 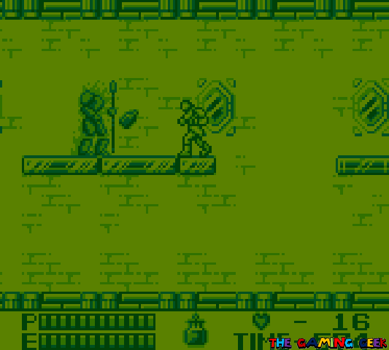 You throw the Holy Water forward a short distance.

The Holy Water goes forward in a short arc, then explodes into a small ball of fire whenever it hits anything. This ball of fire stays on for a few moments, killing anything that touches it. Personally, I prefer the Throwing Axe because this game has a lot of enemies that will spawn just above you, like bats and other evil flying monsters. Some bosses are also quite vulnerable to the Axe.

Even though this is just a Game Boy title, Castlevania II: Belmont’s Revenge features a wide array of monsters and bosses to fight. What I remember quite fondly are the rolling eyeballs. I was a little shocked when I first played this game as a kid and was faced with these enemies. 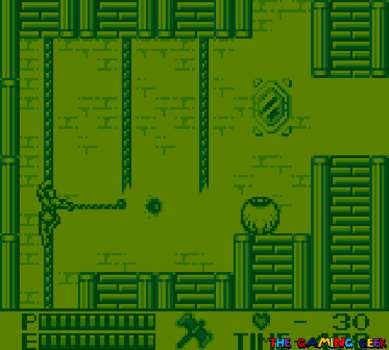 I definitely remember these enemies even if it’s been more than two decades since I last played this game.

From a gameplay perspective, the notable ones are those that do more than just deal damage to you. There’s an enemy that shoots large balls at you. If they hit you, you’ll take damage and lose a whip upgrade. Another enemy will deplete your hearts when they hit you. A different sound effect plays when special enemies hit you, so you’ll know that something bad happened. 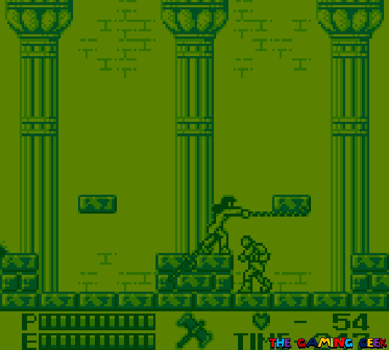 I don’t want to talk about the boss battles in too much detail to avoid spoilers for anyone who wants to go into this game blind. But I loved each one of the bosses in this game. With a full health bar, they’re a bit too easy. But you probably won’t make it to them with full health, unless you’re really good at this game. In that aspect, I think they’re pretty balanced.

Castlevania II: Belmont’s Revenge is generally good in terms of graphics. I especially love how stages look. Both foreground and background elements are quite detailed. Enemy sprites are quite detailed too, especially the bosses. What I can’t give this game a pass on is Christopher Belmont’s sprite. It’s okay when it comes to detail, but it lacks animation frames for walking. He seriously walks like he’s in an LCD game. I know that the NES Belmont is also like that, but I have to call it out. 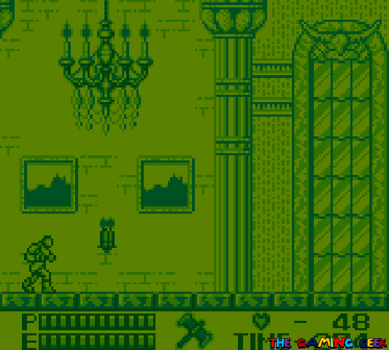 Look at all that detail in this screen!

When it comes to music, what you can expect from Konami? Of course this game has an excellent soundtrack! I’m not an expert on Castlevania themes so I don’t know if any of the tracks in this game are remixes, but they all fit the franchise and this game specifically. They’re such a treat to listen to. I replayed this game just because of the music, to be quite honest. 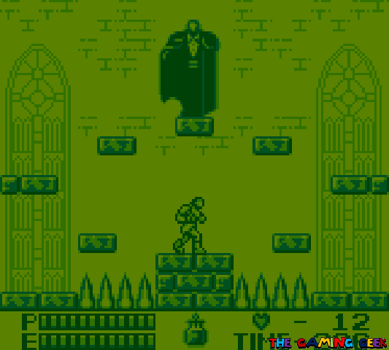 What kind of tricks does this version of Dracula have?

In terms of presentation, this game is quite lacking. The intro is just text without any accompanying images. There are no cutscenes in the game. Even the status bar is very basic. However, the lack of any presentation flourishes won’t detract from the experience. The game is just lacking that “Wow!” factor.

I can see why Castlevania II: Belmont’s Revenge is considered as the best Castlevania game on the Game Boy. The game is well-paced, has reasonable difficulty, and great stage and enemy design. The password system is quite handy, as well as the stage select option. It’s a little watered down, though. There are only two sub weapons and only six stages in the game. Castlevania veterans might see this as a negative.

But I don’t. I expected a lite version of the NES Castlevania games, and that’s what I got. This is definitely a must have for any Game Boy library or collection. Will it provide anything that other Castlevania games don’t have? No. But very few Game Boy games are worth playing over proper console games. So aside from Game Boy game collectors, I’d also recommend this game to someone who wants a quick Castlevania experience.