I loved Tim Burton’s 1989 Batman movie when it first came out, so you could imagine how happy I was when I found out that my grandmother bought me a Batman game for my Game Boy. And it was a direct tie in to the movie too. Since I’m still a big fan of Marvel, I’ve decided to use my extra free time to go back to video games based on comic book superheroes. Yes, I know that Batman is a DC character. But there are a lot of good Batman games dating back to the late 80s and early 90s, so I decided to revisit this one first. How does the first Batman game on the Game Boy hold up today? Let’s find out. 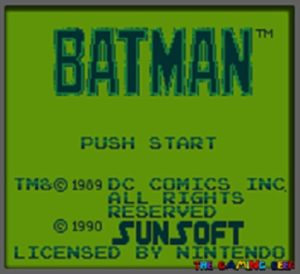 A cool animation of a spinning Bat logo serves as the introduction to this generic looking title screen.

Sunsoft’s first Batman title for the Game Boy is a standard action platformer. Immediately, what stands out with this game is that it’s a shooter like Mega Man. Yes, Batman has a gun in this game and his only method of combat is to shoot it. He doesn’t use guns, and he definitely did not use one in combat in the Burton film, so this definitely stands out.

The game has several different power ups, most of which are standard to platformers. You have ones that change your shot type, increase your bullets, give you more lives or refill your health meter. There are two power ups that fit the Batman theme, the first one turns your bullets into Batarangs. The other gives Batman a Batarang that spins around him. This acts as a shield that blocks enemy fire and damages them upon contact. These also serve as armor – when you get hit, instead of losing health you lose one of these. You can have up to four, and there are power ups that can make them spin faster or slower. 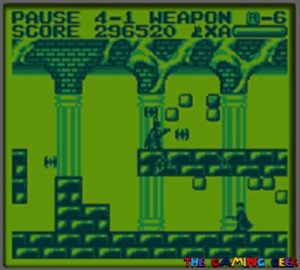 Adding to the game’s challenge are the inclusion of what I’d like to call as power downs, which are items that penalize you instead of help you. There’s one that turns your shots into regular bullets with limited range. Another reduces the number of shots you can make. It hurts when you get these power downs late in the game especially the short ranged shot, so you need to factor these in as you progress throughout the levels.

The game’s design is pretty basic, but solid. This was released early in the Game Boy’s life cycle so I understand. However, I think Sunsoft could have done more to represent Batman’s abilities, like giving him a grappling hook.

Even back then, I was impressed with how closely this game follows the events of the movie. The game’s stages are based on the same locations of Batman’s action sequences in film. For most of the areas, there are static cutscenes that follow the events of the movie. For a kid, this was a great way to relive the movie’s action-packed moments. There are even a couple of stages wherein you pilot the Batwing! 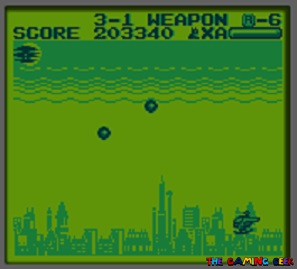 Being this closely tied into the source material is also detrimental however. Since the film only has one major supervillain, the game only has two boss battles if you don’t count the end level bosses in the Batwing stages.

In terms of visuals, this game excels when it comes to how each of the stages look. The developers maximized the dot matrix screen of the Game Boy and added a lot of detail in the backgrounds. The factory stages actually look like the insides of a factory, the Batwing stages include a view of the Gotham skyline, and so on. 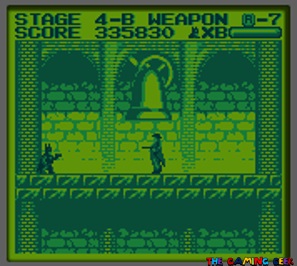 The final battle between Batman and the Joker.

I wish the same could be said about the game’s sprites. Since the stages are restricted vertically, I think the developers had to settle for small sprites. Batman does have the cowl and cape but his body is just a black glob with minimal detail. Human enemies look fine, but occasionally I run across an enemy that I could not identify.

What am I fighting here?

And finally, the audio. From the opening sequence to the end of the game, Batman is filled with great themes. I’d compare this game’s tracks to classic Castlevania music – that’s how much I like this game’s music.

Like most of the Game Boy games released at that time, this Batman game was quite short. With save states, I can beat this game in under two hours. Back then though, it was a good length for a portable game device running via AA batteries. As you progressed each stage would get harder, so it took me a good amount of time before I was able to beat the game.

Knowing that there are a lot of bad movie tie-in games during this era, I’m actually quite impressed at how solid Batman is. It’s not outstanding, yes. But the great music and decent gameplay mechanics helped me enjoy my replay attempts. I’d recommend anyone who is into retrogaming or superhero games to give this one a shot.