If you asked me what I think is the best non-comic book incarnation of Batman is, it’s got to be the Batman: The Animated Series version. From the art style, the stories, the characters, and the tone, this cartoon series did a lot of things right. Its success even carried over to other franchises, leading to Superman’s own series, as well as several ones for the Justice League.

Anything successful finds its way to video games sometimes, and that happened here too. One of the best comic book video games that I’ve ever played is a Super Nintendo that’s also based on Batman: The Animated Series. With Konami also developing a version for the Game Boy, can we expect a quality game? Let’s find out. 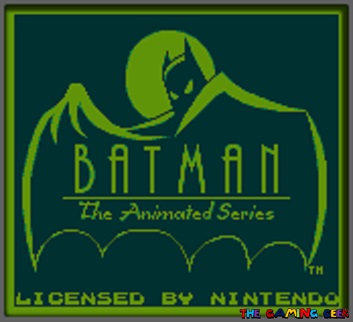 Title screen for Batman: The Animated Series on the Nintendo Game Boy.

Batman: The Animated Series is an action platformer based on the cartoon series of the same name. In the game, you take on the role of Batman as he fights different Gotham City supervillains. The Batman moves template is in full effect here – he can jump, wall jump, and attack via punching. Sometimes, the game will let you play as Robin. He can do almost everything that Batman does – we’ll talk about that in further detail later.

The game has two power ups. The Batarang allows Batman and Robin to attack using their famous signature weapon. Each Batarang powerup has 5 charges, and you can only hold a maximum of 9. These won’t carry over to succeeding levels. To toggle between Batarangs and normal punching, all you need to do is press the Select button.

The other power up is a health refill. This only refills three blocks of health. You only have one life per attempt. When you lose all your health, you need to use up a continue. And you only have two continues in this game. You really need to be careful with your health and continues if you want to beat this game. The game has only five levels, so it is a little short. There is no save or password feature.

Batman and Robin have a few differences. Batman has more health – he’s got seven bars compared to Robin’s five bars of health. He also has a grappling hook. Pressing Up and A fires it, and the hook shoots straight up. You can do this while standing or in the air. As it shoots upwards, you can’t use this to swing forward. It’s range is also limited, but it goes far enough.

Robin can stick to ceilings, allowing him to avoid enemies.

Both characters can “flip” through certain floors and ceilings. The game’s level design will require this a lot. You’ll need to take advantage of this move when you can.

The graphics of Batman: The Animated Series are amazing. By this time, Konami has really mastered their sprite work. All sprites are recognizable, and you can even make out what each generic enemy is representing. They also managed to stay true to the style of the animated series. This is an excellent example of how good games can look like on the Nintendo Game Boy.

From the sprites to the stages, this game has impressive Game Boy graphics.

The music of this game is also amazing. They use a slow version of the main theme of the animated series at the start of each level to build the mystery of that specific stage. Once the action ramps up, they shift to faster paced background music. This game is such a treat to listen to.

From the opening cutscene, you know that this game is going to be good.

What really makes this game stand out for me is the idea of having each level represent an individual episode. Whenever I play superhero games, I can’t help but ask why the supervillains are working with each other. Here, that question doesn’t apply – the villains aren’t working with each other. They’ve got their separate plans and Batman is trying to stop them individually.

Before each episode, you get some really good looking cutscenes that explains the plot of that episode.

This allowed Konami to use as many of Batman’s villains as they can. And they used a lot of them. You will take on the Joker, the Penguin, the Riddler, Mr. Freeze, the Scarecrow, Poison Ivy, and Catwoman in this game. Each episode is introduced with a series of cutscenes, explaining the general “plot” of that episode. It really feels like you’re experiencing several episodes from the series.

Batman: The Animated Series would have easily been the best superhero game on the Game Boy if not for one flaw. Heck, this game might have made it to my top ten or five if not for this flaw. My problem with this game is that it is too hard to beat.

The game becomes too hard because of the combination of several issues that, altogether make this an almost impossible game to beat. First, you don’t have lives and only have two continues. Second, health refills are very few and they don’t refill your health completely. The third involves the game’s design – while not unfair, it can be difficult to avoid taking damage in this game. Especially in the boss fights. 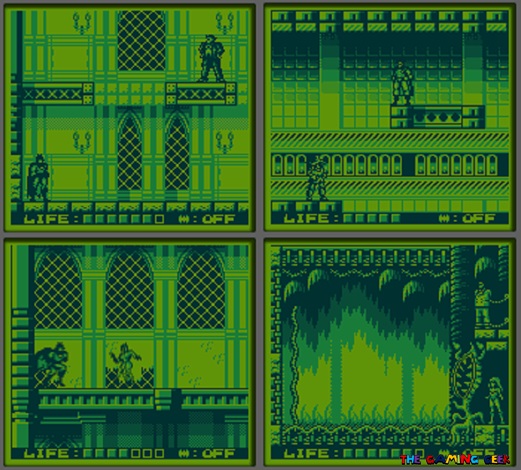 You fight a good selection of Batman’s villains in this game.

The bosses all have attack patterns that can easily be identified. Some of these boss fights don’t offer consistent “safe spots”. In my experience, winning a boss fight boils down to dealing more damage and avoiding as much as you can. These aren’t fights you can win if you’re already down to two health bars at the start. With only two continues, you need to make sure you start each boss fight at full health to even have a chance at beating this game.

I don’t think this game needs major changes. Maybe increase the number of continues on Normal difficulty? How about making the health power up refill the health bar completely? This game doesn’t allow for a lot of mistakes, which can be frustrating.

Batman: The Animated Series is a polished game in all aspects. It looks great, sounds great, and plays great. However, it is so hard to beat because you’re not given enough resources. If you want to beat it, you may need to use some Game Genie codes or resort to save state scumming. I’d recommend it to anyone who doesn’t mind being unable to finish the game, or to hardcore gamers who want a new challenge to overcome.