Batman: Return of the Joker is another Game Boy game that I was able to play when I was younger. I actually remember loving this game a lot. I didn’t have my own copy; a classmate of mine lend me his for a long time, long enough for me to beat it several times. I have fond memories of this title and looked forward to when I would replay it next. Is Batman: Return of the Joker as good as I remembered? 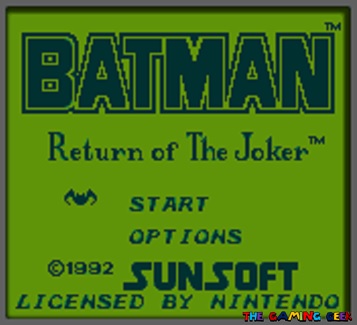 Title screen for Batman: Return of the Joker.

Batman: Return of the Joker is an action platformer developed and published by Sunsoft. Yes, these are the same guys behind the Batman video games that tied into the 1989 Tim Burton movie, both the NES and Game Boy versions. Given that the Joker was the primary villain in those games, it feels like this one was built as a video game sequel.

In this game, you play as Batman, and the Joker has escaped. It is up to you to catch him and put him back in Arkham Asylum. There are four levels in the game, and you can choose to play the first three in any order. However, you need to beat all three in order to play the fourth and final level. Each level has an end boss. I’ll discuss these in detail in a different section. 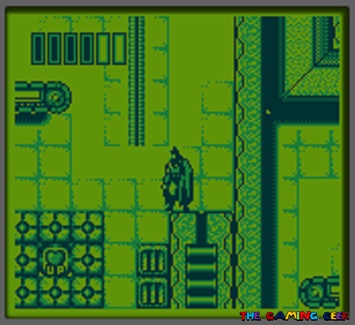 This Health increase is quite tricky to get. You can easily lose a Continue if you’re not careful.

The game has three difficulty settings: Easy, Normal, and Hard. Regardless of the difficulty, you only get one life and 5 continues. At the start of the game, Batman has five health bars. There are, at least to my knowledge, three power ups that will add one bar each. You will need to find as many as you can in order to beat this game – I needed all eight to survive the final battle with the Joker on Normal difficulty.

Batman uses the D-pad to move. There’s some inertia to his movements, similar to Mario’s in Super Mario Bros. wherein you need a running start and can’t stop on a dime. He can throw punches while standing, crouching, or in mid-air. He can’t turn the other direction while he’s crouched though. If you’re crouching and the enemy is behind you, you need to stand up in order to face the other direction.

The Batarang power up lets Batman throw Batarangs. These are limited, and there is no indicator of how many are left. You’ll just run out of them eventually. When Batman uses Batarangs, he still does his punch motion so you can also attack up close. There is no way to toggle this off – you use them by default. This is problematic because some enemies can deflect your Batarangs. Their deflecting animation is also an attack. If you attack such an enemy up close and you have Batarangs, you trigger them to attack you.

Batman can jump and wall jump. I don’t know if it’s just me, but it takes a while for Batman to reach the peak of his jump. Sometimes, I end up tapping the jump button too early and trigger a wall jump. When Batman commits to a jump direction, there is only one way to change it. With no lives and limited continues, you really have to be careful when navigating pits and gaps.

The grappling hook lets you traverse across the levels.

Finally, this version of Batman can throw a grappling hook. This is quite handy, allowing you to skip entire sections of some of the levels and can even help you in some of the boss fights. His grappling hook has a limited range. Mastering this will help you make good use of grappling.

Despite a limited number of control inputs, Sunsoft did a wonderful job in giving Batman all the basic moves that he needs. Playing him in this game feels right.

Batman: Return of the Joker’s first level takes place in the sewers. This level will give you a challenge quite early on – a tank will blow and spill hazardous fluids. This will start to flood the level, and for some time will ebb and rise. In Normal and Hard difficulty, this fluid will damage Batman. At the end, you will face off against Dark Claw. 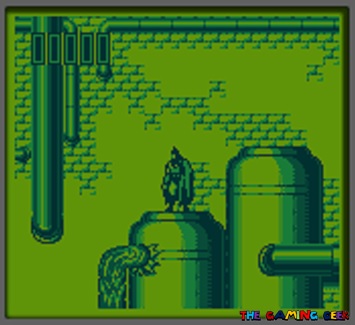 When you see this, be on high alert.

The second level is in an industrial complex wherein you face off against kunai-throwing ninjas and a freaking tank! At the end of the level, the Shogun Warrior awaits. He looks like a traditional Japanese samurai and fights with a sword.

You face off against ninjas and a tank in the Machine Shop stage.

And the third level happens on a moving train. It is very straightforward, all you have to do is run to the right. The regular enemies here charge at you, and it’s a little hard to hit them before they hit you. Later on, you’ll be able to fight inside or on top of the train cabins. At the end of the level, the baseball-themed Foul Ball awaits.

The train level is very straightforward.

Finally, the fourth level takes place in a cavern. This level is quite difficult, primarily because of moving platforms that do not go back to their original place. If you miss them and they start moving, you have no way to move forward. Getting through this stage will require a bit of trial and error, and will likely burn up a few continues.

What is the Joker doing in these caves?

At the end of the level awaits the Joker. In Easy difficulty, this is a straight up fight between Batman and his arch-nemesis. Otherwise, the Joker will have a magnet installed that will impede Batman all throughout the fight. This magnet will constantly be chasing after Batman, pulling him off the ground and attracting any Batarang that he tries to throw.

The game’s main event – the Return of the Joker.

This can be a pretty tough fight. Not only do you need to keep an eye on the Joker, but you have to be aware of where the magnet is at all times. Thankfully, the Joker does follow an attack pattern that you can learn and exploit.

Batman: Return of the Joker has really good graphics for a Game Boy game. This time, the sprites are large. And despite the monochrome color scheme, sprites are very recognizable. Most of the levels look really great too, having a lot of detail in the foreground and background.

Because of detailed sprites, you know what the developers were going for with the bosses even if they aren’t real comic book characters.

The game’s music is excellent. It makes good use of the Game Boy’s audio capabilities. There’s enough variety in the stage themes, but each and every one of them fits an action game perfectly. The theme for the battle with the Joker is a standout, complete with an intro that matches his starting animation. The game has a Sound Test option in the Options menu, so you can listen to the game’s tracks any time you want.

In terms of presentation, Batman: Return of the Joker is a little lacking. I liked the spotlight theme before each level and especially for each boss fight. It makes all the boss fights feel like significant events. I would have wanted some cutscenes to explain the plot a little more and add some form of a story to the game.

Batman: Return of the Joker is Nintendo hard, and not in a good way. There’s a lot of cheap deaths here. Enemies at places where they can knock you off a platform if you’re not careful. Footholds that explode a second after you just stepped on them. Platforms that don’t return and lock you out from completing the level if you don’t use them correctly. Combine this with having only five continues with one life each and you can be in for a frustrating experience.

Thankfully, there are two things that are able to salvage this game. Playing on Easy difficulty makes the game accessible, and you don’t get locked out of any endings or sections of the game. After playing it again now, I realized that I only beat this game in Easy difficulty back when I was younger. The second thing that doesn’t make this a complete wreck is the game’s length. The levels are short, so you don’t need to deal with a lot of level memorization to beat this. I was able to beat this in Normal difficulty after a few tries.

I’d recommend Batman: Return of the Joker to gamers who want to overcome a short challenge. This game is beatable by making and learning from mistakes. Once you figure this game out, you can beat this in an hour or maybe two. It’s one of the best superhero games on the Game Boy, and is definitely worth trying.