I never owned the first Amazing Spider-Man game on the Nintendo Game Boy, but I remember playing it a lot when I was a kid. In fact, I remember beating that game at least once. So I decided to revisit the game to remind myself about it. 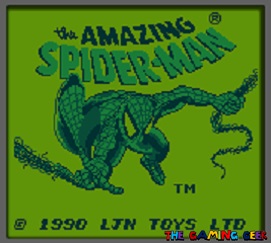 The title screen looks great and is really promising.

Like the majority of video games based on Marvel Comics characters, Amazing Spider-Man was published by LJN. But I was surprised when I found out that Rare developed the game. Yes, the same Rare that was behind the Donkey Kong Country trilogy. LJN is known for bad video games, and Rare is known for excellent games. Let’s see who wins out.

Amazing Spider-Man is an action platformer. Similar to games of that era, most of the game’s stages is limited to left-right scrolling. However, there are two sub-stages thrown in wherein you need to climb up walls to get to the rooftops of that area. Spider-Man can crouch, jump, punch, kick, and jump kick. He can shoot webs, which uses up a web fluid meter. He can also swing from webs if you jump high enough. Normal enemies die from one hit, so I wouldn’t classify this as a beat ’em up.

There are six stages in the game, some broken down into sub-stages. All the stages are preceded by a cutscene depicting a phone conversation between Spider-Man and one of his enemies, and ends with a boss battle with the latter. Played straight through, the game is a little short but fits within how long Game Boy games were during this era.

In terms of graphics, Amazing Spider-Man is a mixed bag. Stages and backgrounds have a lot of detail in them, and they are able to represent their locations well. The style itself will be subjective, but for me they were okay. I definitely appreciate the effort put into making the stages look good.

There’s a lot of detail in the backgrounds of Amazing Spider-Man’s stages. From left to right: Alley, Subway, Park.

I wish I could say the same about the game’s sprites because they are awful. I know it’s tough to depict Spider-Man whose costume relies on the separation of reds and blues in a monochrome format, but I still think Rare could have done better here. Spider-Man just looks really scrawny, and to be honest it doesn’t look like Spider-Man at all.

I can say the same about all the other sprites. Enemies look okay, but they could’ve been better. The end level bosses are recognizable but from a scale and detail standpoint, look like they were done by an amateur pixel artist.

When I was writing about Super Mario Land and Batman on Game Boy, I was thinking that Game Boy games usually have great music. Would I ever find a Game Boy game with bad music?

Okay, to be fair, Amazing Spider-Man has decent music. But there are so few of them. There’s the cutscene theme, the stage theme, and the boss fight theme. That’s it. I guess I should be thankful that the music isn’t that bad, because it’s certainly overused.

Now we get to the bad stuff. First of all, Spider-Man has to pull back before punching so it’s hard to land your attacks. Because the punching range is too short, timing it wrong can lead to getting attacked first. So rather than using the punch, I’ve had to rely on the crouching kick or jumping kick throughout the game.

Spider-Man also needs a running start to jump high. But there is no run button. In fact, Spider-Man doesn’t run. So, walking start is a more accurate term. Because Spider-Man doesn’t run, this mechanic isn’t intuitive and takes time to get used to. It’s critical though, because you need to jump high to be able to web swing. And there are stages with floorless parts which require you to web swing to proceed. 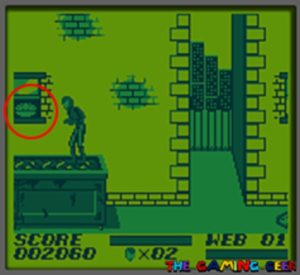 This thing restores your health. But it doesn’t look very appealing and I can’t even tell what it is. A cheeseburger?

Speaking of webs, I don’t like it whenever webbing is consumable in Spider-Man games. It gets worse here because of how you get power-ups. When you knock out human enemies, they leave behind different power-ups that hop up and come crashing down on the floor. If you don’t catch them before they hit the floor, they’re gone. So you really need to make sure you have enough webbing when you get to the later stages because you will have a hard time progressing without webs.

I liked the idea of a wall crawling stage, but the mechanics are messed up. So you have to jump and press Up to move up the wall. But if you don’t let go of the Up button, you won’t stick and will just fall to your death. Another mechanic that isn’t intuitive and takes time to get used to.

My final complaint is how cheesy the final two levels can get. I can’t believe I beat this game without save states as a kid, because this game is just going to cheese you out. At some point, I had to dodge dangerous stuff coming out of a wall, an alligator trying to chomp off my feet, and the shots of a guy way up the stage who can change his line of fire. I got through this part thanks to save states and patience. I’m absolutely sure I beat this game back then because I remember the final battle enough to recognize it.

Amazing Spider-Man isn’t very good. It has a lot of gameplay elements that I find annoying, and the game’s sprite work could have been done better. But, and I can’t believe I’m saying this, it’s playable and not broken. I tried the two sequels that came after this and I can’t even get past the first stage in both those games. Knowing how bad LJN games can be, I guess I should be thankful that this is better than their usual output.

I don’t think I’m going to bother with the Amazing Spider-Man sequels. There are other, better Spider-Man games waiting for me. And if you are considering playing classic Spider-Man video games, skip the original Game Boy ones and go straight to the titles released for the Game Boy Color.