X-Men: Mutant Wars is the second X-Men game to be released for the Game Boy Color. The previous game, X-Men: Mutant Academy, didn’t do so well. Did the developers learn from the mistakes that caused the first game to fail? Let’s find out. 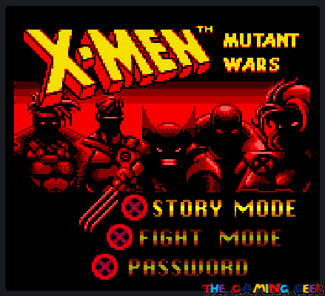 X-Men: Mutant Wars is an action game developed by Avit, Inc. and HAL Corporation and published by Activision. In this game, you can play as five different X-Men members: Wolverine, Cyclops, Storm, Gambit, and Iceman. The plot revolves around evil cyborgs and robots on the loose, and the X-Men are attempting to put a stop to them. This places them on a path towards familiar villains like Sabretooth, a Sentinel, and even Magneto. 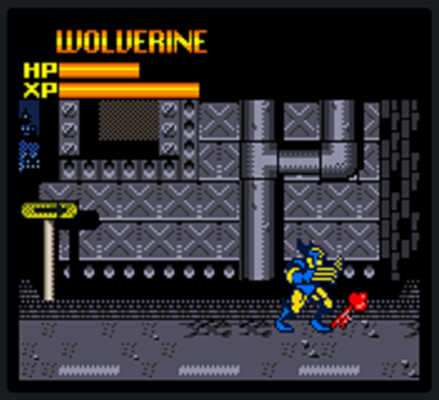 You’ll need the Red Key to exit each stage.

The game has two modes of play. Story Mode is where you go through the game’s stages and main story. Fight Mode is a boss rush mode where all of the story content is cut. Both modes use similar gameplay mechanics wherein you can swap between any of the five X-Men members at any time.

Stages are very simple. You only have to go to the right, with most of the early stages not even having any elevated areas or pits. There is a stage with elevated ground, and later stages do feature pits to jump over, but for the most part you won’t be doing complicated platforming in this game. Enemies also randomly spawn, and they’re spawning almost all the time. Even if you stand still in one spot, enemies will spawn and attack you.

Watch out for anything that looks like an entrance.

Occasionally, you’ll see spots with paths leading downward or upward, like open doors in the background or stairs leading to a different room. Randomly, a Red Key will appear in these areas. You’ll need the Red Key to exit the stage, so you need to explore all of these areas. At the end of each of the stages, a boss fight awaits you.

Your primary character is Wolverine – you start every stage with him by default. To change to a different X-Men member, you need to press a direction on the D-Pad and the Select button. Left swaps Wolverine with Gambit, Right swaps with Cyclops, Up with Iceman and Down with Storm. Pressing Select swaps back to Wolverine. This is done in real time, so it’s actually a big problem.

You see, the D-Pad and the Select button are both on the left side of the Game Boy Color. And the Select button is right in the middle of the device, so you’ll have to do some complicated finger stretching with your left hand to swap. Or, you could press the Select button with your right thumb, which is also a bit of a stretch. If you’re playing this on the original Game Boy Advance (which has backwards compatibility), then you’ll really have trouble.

When you do a swap, the game only pauses briefly. Incoming characters won’t have any invincibility frames, so they could actually get hit by an attack as soon as they come in. So, trying to swap could get you in trouble because it’s hard to defend yourself while executing the move, and your incoming character is defenseless immediately after. A quick fix would have been to pause the game while you’re holding the Select button and resume when you let it go, and giving the incoming character a few moments of invincibility. 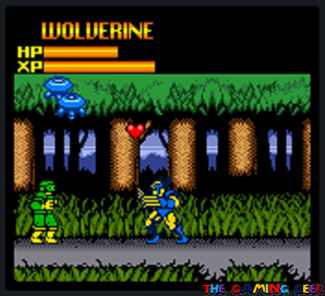 Each member has an HP meter (health), and an XP meter. The latter works more like an Energy meter, which depletes whenever characters use specific attacks. Inactive members will regenerate XP, but not HP. Enemies frequently leave Hearts behind when you kill them, which you can use to heal.

Wolverine and the X-Men

All five X-Men move similarly. They can walk, jump, and double jump, but they can’t crouch or kneel. Double tapping left or right will make your character run (or glide). However, Wolverine is the central character for a reason – he can do a lot more than the others can.

Cyclops, Storm, Gambit, and Iceman are all limited to shooting projectile attacks. These vary in size, with Cyclops and Iceman having the smallest ones. Meanwhile, Storm shoots tornadoes that are almost as big as enemy sprites. All four can shoot straight forward, diagonally upwards, or diagonally downwards when in the air. 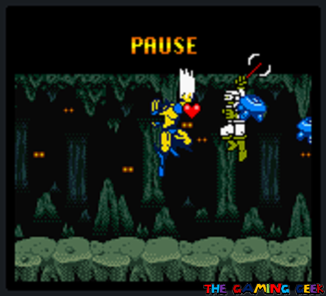 Wolverine has claw swipes, uppercut slashes, diving kicks, and even backflips. I spent most of the game playing as him, and I bet anyone who plays this game will do the same too. He’s got other moves that I never got to see because enemies kept spawning and I didn’t have enough time to learn how to do those. In any case, I was able to get through the game just fine with the three attacks that I mentioned.

Despite this, there will be times when it’s best to swap characters. If a character runs out of health, they’re KO’ed for that entire stage. It’s better to swap to a character with more health, then swap back once you find health refills. Bosses in this game hit hard, so it’s best to have each member available to fight when you get to the end. It’s also easier to fight some of the bosses with long range attacks.

Something that I really look forward to in superhero themed video games are the boss fights, where my favorite superheroes are pitted against their archenemies. X-Men: Mutant Wars has one for every level. Unfortunately, half of the game’s bosses weren’t based on popular comic book villains. 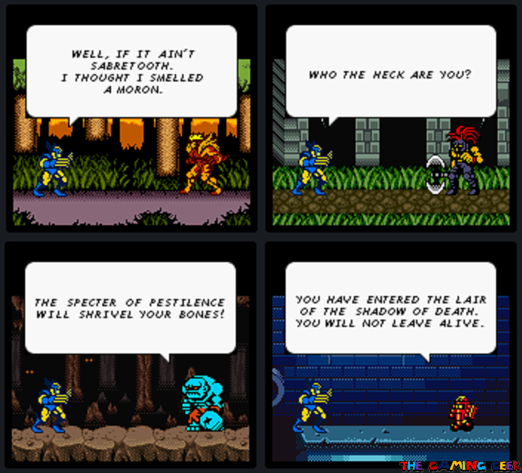 You do get to fight Sabretooth, Mystique, a Sentinel, and even Magneto. I don’t understand why the developers didn’t use real X-Men villains instead of new creations. I’d appreciate them more, even if they used obscure characters like Caliban or Forearm. Wolverine’s dialogue just before the start of the second boss fight cracked me up.

Battling a Sentinel and Magneto.

My other complaint about these boss fights is that they happen too fast. They take and deal too much damage, so they either kill of your X-Men in the blink of an eye, or they don’t last long. So the battles with them aren’t very memorable. To be honest, there are only two memorable fights in this game for me – the fight with the Sentinel and the final boss fight.

X-Men: Mutant Wars has great graphics. Colors are used well. Characters are easily recognizable, it’s easy to tell who everyone is supposed to be. My issues with the graphics don’t involve quality though. The developers reused their sprite for the cyborgs too often. They all look alike, save for a palette swap.

Can you spot the differences?

Stage backgrounds are also quite detailed. It’s easy to see them as the locations that they represent. But they don’t change at all. Putting some changes in the backgrounds would have given me the impression that I was actually moving and travelling from one spot to another.

I’ve got similar criticism for the game’s soundtracks. The stage music are mostly good to listen to, but they’re a bit too short and loop too soon. Because this game’s stages are just long stretches of road, the stage music becomes repetitive in the absence of stage transitions. Otherwise, this game’s music and sound effects are nicely done. 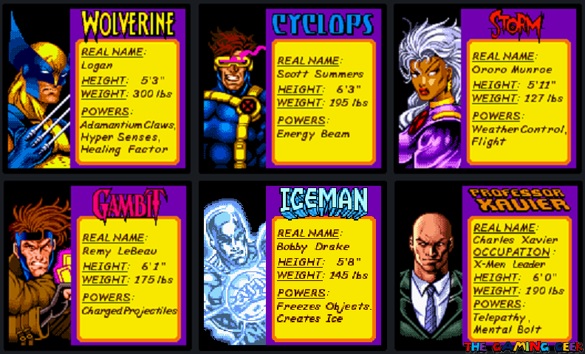 The attract scenes features bios of the X-Men members featured in this game.

Finally, I love this game’s presentation quality. I just love it when a developer embraces the fact that these games are sourced from comic books. And the development team behind X-Men: Mutant Wars did just that. They used comic book style art in the attract screens and in quick cutscenes before each stage and at the end of the game. Even if some of the in-game cutscenes only make use of the character sprites, I loved how they used word bubbles for the dialogue.

My biggest complaint about X-Men: Mutant Wars is how off the overall plot is. I mean, Professor X is sending the X-Men out to go after cyborgs and robots. Later on, you’ll find yourself fighting zombies in a graveyard. And werewolves on a train. And Secret Service Agents in… the White House? What?

The X-Men will fight supernatural beings and even Arnold Schwarzenegger clones in this game.

I’m not going to spoil any plot details but I will say this. I couldn’t believe what was happening, why Professor X is sending his X-Men after these cyborgs. And there’s no real explanation why zombies and werewolves are going after the X-Men either. These things take me out of the immersion.

With every game that I play, I approach it with an open mind, even if I already know how it fared in terms of critical reception. But from the start, I had a problem with X-Men: Mutant Wars. It looks great, and has good enough music. The gameplay mechanics have some flaws but they function well enough.

But the main plot of the game doesn’t fit the X-Men mythos. And it was hard for me to accept where the story was leading to. When combined with the lackluster gameplay and bland level design, I had trouble enjoying this game. If you’re a fan of the X-Men and you only have a Game Boy Color, this might be worth your time. But there are better X-Men games out there (and much better games in general) that you should spend your time on instead.