I was wary of X-Men: Mutant Academy on the Game Boy Color. Fighting games usually need more than two buttons and a powerful console, which the Game Boy Color definitely isn’t. But when I learned that Crawfish Interactive in the developers seat, I decided to give this one a try. They were behind the Game Boy Color port of Street Fighter Alpha, which received positive critical acclaim. Let’s see if they were able to replicate the magic. 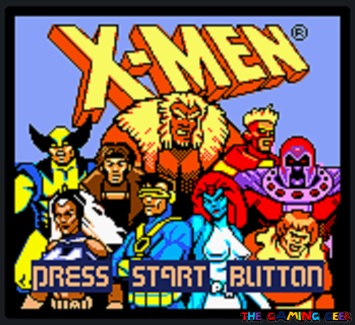 X-Men: Mutant Academy is a fighting game published by Activision for home consoles. They also published a version for the Nintendo Game Boy Color, developed by the aforementioned Crawfish Interactive. Both versions are based on the X-Men franchise and feature X-Men members and enemies as fighters. 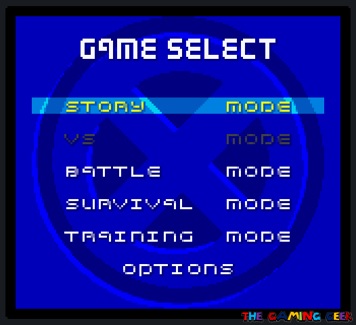 X-Men: Mutant Academy’s game modes. VS Mode is grayed out because I don’t have a link cable.

The Game Boy Color version has several game modes. Story Mode is where you fight each character, supposedly following along a general plot. This version doesn’t really have a story though, which is the first of many major disappointments. If you choose an X-Men member, you fight other X-Men members first. You get a scene with Professor X declaring you to be the most powerful of X-Men. He then instructs you to go after the Brotherhood of Evil Mutants. If you choose an X-Men villain, the reverse happens and instead of Professor X, Magneto will give your mid-game greeting.

Professor X and Magneto, two sides of the same coin.

VS Mode is a two player mode, but you’ll need a link cable, another Game Boy Color, and a second copy of the game to play. Battle Mode features elimination style matches between teams of three fighters. In Survival Mode, you fight as many as you can with only one life and a small health refill after each victory. Finally, you can learn and practice each fighter’s moves in Training Mode.

X-Men: Mutant Academy for the Game Boy Color features nine fighters available at the start, with two additional fighters that you can unlock via a secret code. For the X-Men, you can choose between Cyclops, Gambit, Wolverine, and Storm. Meanwhile, the Brotherhood side has Magneto, Mystique, Pyro, Sabretooth, and Toad. I agree with all of the character choices except for one – Toad. For one, this is an X-Men game and yet there are only four X-Men and five villains. I think Toad’s slot could have been given to someone like Psylocke, Bishop, or Colossus. 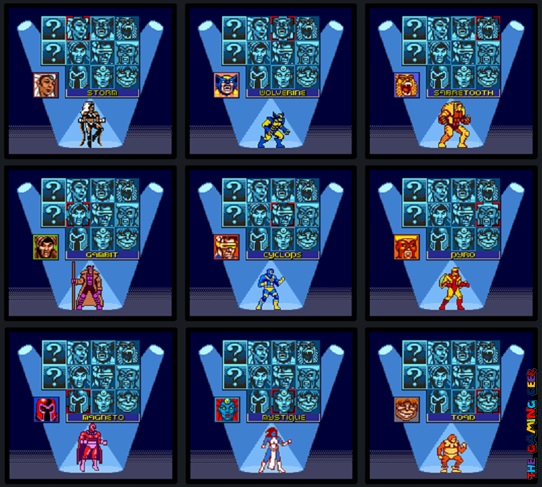 The game features a good selection of X-Men heroes and villains. 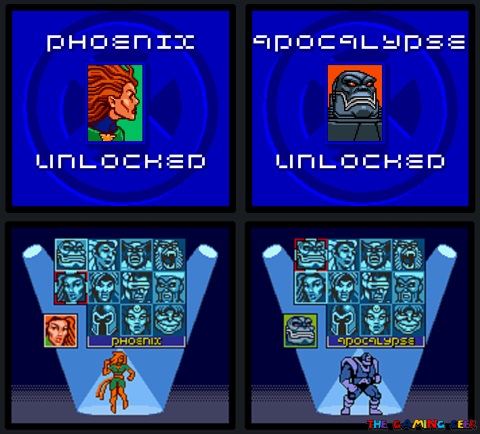 Both are great choices for secret characters, in my opinion. Apocalypse is one of the X-Men’s primary villains while Phoenix is one of the strongest X-Men. Without a save system, you’ll need to take note of their unlock codes. You’ll need to re-input these every time you turn the game back on.

I didn’t talk about how each character is represented in X-Men: Mutant Academy because I couldn’t fully appreciate the controls. The D-Pad works as expected, with left and right moving your character, down for crouching, and up for jumping. Because they were limited to just two buttons, the developers had to assign two different attacks per button. Tapping A does a light punch, and holding it does a heavy attack. Doing the same with B results in a light or heavy kick respectively.

Requiring a double tap makes it hard to pull off special moves.

It takes a while to get used to, but isn’t as bad as how special moves are executed. Each character has two moves, executed by some sort of D-Pad sequence and a double tap of the A or B button. Even in Training Mode, it is so hard to pull off special moves. I don’t know if it’s because the window for pressing the required buttons is too tight, or it’s the double tap that’s messing up my timing.

With special moves that are hard to pull off, I ended up relying on just normal attacks. And that eventually evolved to just mashing A, which was surprisingly effective against the AI. Yes, I beat this game with several characters by just mashing A.

I actually liked the graphics of X-Men: Mutant Academy. The developers were able to work within the limitations of the Game Boy Color and give each fighter a good looking and well-animated sprite. Stages also look great, and there’s a good selection of locations with varying color palettes that change up the visuals enough.

Sabretooth vs Phoenix in the Savage Land and Cyclops vs Mystique outside Department H in Canada.

X-Men: Mutant Academy also has decent music. The opening theme is catchy and full of energy, and the level themes are generally entertaining. However, there are some instances wherein the game lacks music, such as the mode selection screen. Also, the transition between levels does not have a theme of its own. Instead, the theme for the upcoming level starts early. Finally, the game’s sound effects leave much to be desired though. There’s not enough of them, and whatever has a sound effect, the sound doesn’t fit the action or event.

Storm vs Pyro in England and Cyclops vs Wolverine in the Morlock Tunnels.

The game’s presentation is also lacking. I already mentioned the lack of a true story in Story Mode. Outside of the characters and the locations, the X-Men franchise isn’t used effectively by this game. There are no character bios. The endings for each character are the same generic Winner screens on Normal difficulty. I got a special panel for Wolverine when I beat the game on Hard, but what I saw wasn’t enough to make me want to go through this for each character.

X-Men: Mutant Academy is disappointing. It looked great for a Game Boy Color fighting game. But for fighting games, the most important aspects are the controls and the fighting mechanics. But matches are all about mashing A, whoever it is you selected and whoever it is you’re fighting. Maybe if Story Mode had more to offer, I would have made the effort to beat this with every fighter. But Story Mode has no story whatsoever.

If you want to play an X-Men fighting game, you have a ton of other options. There’s Children of the Atom, Marvel vs Capcom, X-Men vs Street Fighter, or even Mutant Academy and it’s sequel on home consoles. Even if you only owned a Game Boy Color, I’d advise against wasting time on this game.