I have vague, but fond memories of the Game Boy Color version of Spider-Man. The PlayStation version was quite popular, still ranking among the best Spider-Man video games even today. But it overshadowed it’s portable little brother. So I was really looking forward to revisiting this version. Let’s talk about it today. 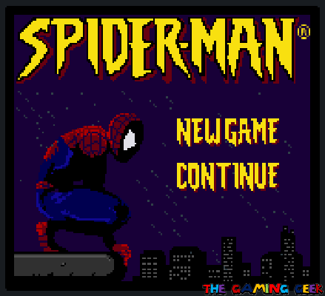 Title screen for Spider-Man on the Game Boy Color.

Spider-Man for the Game Boy Color is an action platformer where you take on the role of the titular character. This version was developed by Vicarious Visions and published by Activision. What’s unique about this game, compared with other Spider-Man video games of the time, is that it follows a more open design.

Instead of being divided into different stages, there are several large areas that you can explore. Like Nintendo’s Metroid, some of these areas are locked until you get to a certain point in the game’s story. From the start, you can already explore a section of the city, a subway station, and the docks. Later on, you’ll be able to explore other locations like a sewer system and a large warehouse.

You can easily get lost in the city area if you don’t pay attention to the buildings around you.

And these areas are large in terms of a Game Boy Color game. The city area, for example, covers everything from the streets to between tall buildings to the New York City rooftops. More than the usual left to right areas in platforming games, this game’s locations have a lot of verticality. Thankfully, our hero has a couple of moves that will help us deal with this level design.

Spider-Man has the usual moves that you’d expect from a platforming character: he can move left and right, jump, and crouch. He attacks via punching combos and can learn an uppercut move later on. While crouching or crawling, he attacks with a quick kick. He’s got a floaty jump kick and a drop kick as well.

Where this game shines is in Spidey’s other abilities. He can still crawl up walls in this game, automatically sticking to any surface he touches while in mid-jump. Unlike other Spider-Man games, he can crawl across perpendicular surfaces. For example, you can stick to the bottom of a ledge, crawl up to its side, then crawl to the top surface. This small change makes wall crawling a viable option for exploring areas with plenty of walls, such as the sewers.

The auto-stick mechanic can be quite annoying though. You end up sticking to anything and everything whenever you jump, even if you didn’t want to. This leads to sticky situations when battling enemies, especially bosses. More than once, I jumped to evade an attack but ended up sticking to a wall and getting hit anyway.

Spider-Man has unlimited webbing in this game. So, use your web moves as often as you want! The first is web swinging, which you can do by pressing A in the middle of a jump. You don’t need to worry about attaching your web-line, it’ll work even in an open area like the docks. 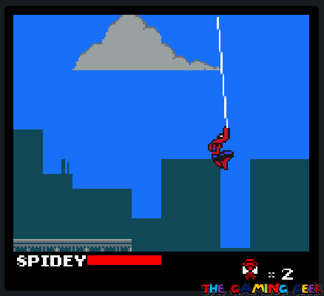 The web-swinging mechanic is quite satisfying. It comes out fast and is quite reliable. It will help you get from one point of the map to another quickly. With unlimited webbing, you’re free to have fun with this move. Sometimes, I just swing back and forth in the city area without thinking about the game’s objectives.

The second move is impact webbing. These are pellets made up of compressed web-fluid which expand into multiple web tendrils upon impact. To do this, you need to do a quick rolling motion from B to A. You can do this while standing, crouching, or even when sticking on walls and ceilings. 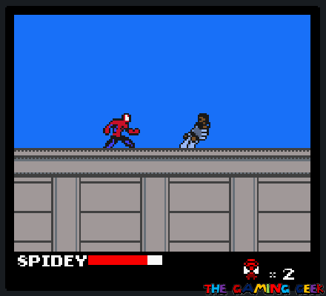 Impact webbing can restrain most enemies, even bosses.

This move is effective in restraining enemies. It even works against bosses, but some can break the webbing or even block it altogether. There is an upgrade that will make these do damage to enemies. This is essential if you want to overcome the last couple of bosses.

The third move is the web shield. You’ll need to find an upgrade to be able to do this. Once you find it, pressing A while crouching on the ground will bring this up. The web shield is effective at protecting you from projectile attacks like gunshots. I didn’t find this useful, but I’m a completionist so I made the effort to look for it anyway.

Upgrades and Leveling Up

Spider-Man has other mechanics that you don’t commonly find in platformers. He’s got stats and levels, for instance. Beating enemies earns you points. Earning a specific amount increases his levels. Leveling up can improve his attack or defense rating. Spidey can even learn new moves like an uppercut and swing kick attack. These growths are fixed per level. 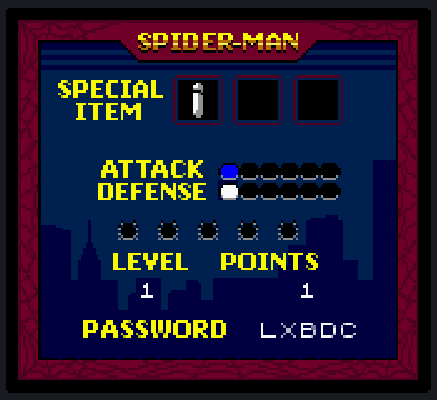 You can see your stats by pressing Select to bring up the Status Screen. You can see how high your Attack and Defense ratings are, your current Level and Points total, and how many upgrades you’ve found. This also has the Password for your current progress, which you can enter on the title screen later on.

In addition to leveling up, you can also find Attack and Defense upgrades hidden in the game’s areas. It’s always advisable to find this early, so take your time with the game and explore the many corners of this game’s locations if you can.

Try to find as many of these power ups as you can.

Exploring can also lead you to finding extra Lives, or Heath upgrades. The only way to increase your health meter is through the Health upgrades. And some of these can be missed – I couldn’t get one particular upgrade in the subway area after the sewers became accessible, so get that one as soon as you can.

Explore to find Health Upgrades and Extra Lives in this game.

I was able to find all the upgrades in my second playthrough. I think that it’ll be very hard to beat some of the game’s bosses if you don’t have your upgrades maxed out. So you really need to spend some time to explore every nook and cranny of this game.

Sadly, Spider-Man isn’t the perfect game that I remember it to be. Aside from inadvertently sticking to walls every now and then, I don’t like how Spidey jumps in this game. He doesn’t jump right away and has to do a momentum animation first. These additional frames mean that you can’t just react to attacks, you have to anticipate them in order to dodge successfully.

You can get to the sewers via the subway station underneath the city streets.

Another problem that I had with this game is the lack of any map screens. With a lot of essential upgrades hidden in large areas, it’s important to know where you are exactly at all times. And not having a map meant that you had to rely on yourself to keep a mental note of landmarks. This is especially tricky in the sewers and the final stage, which are like giant mazes.

Thankfully, these didn’t ruin the experience for me. These were terribly annoying, but not game-breaking. I eventually learned to cope with the jumping and wall-crawling mechanics, and eventually got through the areas that took me a while to navigate through.

I don’t know if it’s nostalgia goggles I’m impressed with Spider-Man’s graphics. Each stage feels carefully thought out, with a lot of specific details. This applies especially to the city where you can recognize buildings if you pay attention.

For a Game Boy Color game, the sprites are quite detailed. Spider-Man himself is animated well. I love it when developers get that he’s supposed to be on the lanky side. Regular enemy sprites are also quite detailed, it’s easy to tell them apart. The quality of the sprites of the bosses isn’t consistent though.

Battling Venom and the Lizard.

Venom’s sprite is large and menacing, and has animation frames depicting something that I don’t want to spoil. The final boss is also well done.

The other bosses are average, recognizable but lacking in unique animations. Maybe it has something to do with how they were designed, having only one or two main attacks. It’s nice to see the Lizard, Hobgoblin, and Doctor Octopus, but I wish these encounters were more memorable.

This game has excellent music. Stage music fit their location: you get upbeat music for the city area, and foreboding themes for the sewers and final stage. The music used for the different cutscenes also fit well. But I’m awarding this game bonus points for including a rendition of the classic Spider-Man 1960s theme, which plays during the status screen.

The opening scene of this game is amazing.

This helps the game a lot in conveying it’s story, which is actually pretty good. It’s not mind-blowing, but it makes sense and could actually play out like Spider-Man animated series episodes. I love how the developers alternated illustrations with the company credits in the opening scenes. It helped add suspense to the intro and made me look forward to starting the game.

Despite remembering how much I loved this game, I’ll have to admit that Spider-Man for the Game Boy Color wasn’t as good as I remembered it to be. Not being able to jump right away and sticking to walls accidentally was really annoying. Some of the boss battles weren’t memorable. And if I really think about it, I spent longer than usual with this game because it took me a while to get used to the large areas. If this had an in-game map, this game may have only lasted a few hours for me.

Do you recognize what this secret level is paying tribute to?

But that doesn’t mean that this is a bad game. It’s still pretty good. The story makes it worth playing the game. Good looking graphics and excellent music helped make the experience entertaining, even if a little drawn out. Not being restricted to a stage and having a large area for web-swinging was something other Spider-Man games of the time couldn’t provide.

So even if this game has annoying flaws, I still highly recommend Spider-Man for the Game Boy Color. It’s worth adding to your collection, and definitely worth revisiting today.