As a Spider-Man fan, I’ve always been intrigued by the concept of the Sinister Six. Six vile villains who couldn’t beat the web-head individually, teaming up in the hopes of finally defeating their nemesis. The Sinister Six as a team was featured in an NES game which wasn’t very good. When I learned that there was a more modern take on the idea, I knew I had to try it.

Title screen and main menu for Spider-Man 2: The Sinister Six for the Game Boy Color.

So today, let’s talk about  Spider-Man 2: The Sinister Six for the Game Boy Color.

Spider-Man 2: The Sinister Six is an action platformer published by Activision and developed by Torus Games. This works as a sequel to the first Spider-Man game on the Game Boy Color. In this game, Doctor Octopus assembles five of Spider-Man’s enemies and hatches a plot to lure the hero and have him undergo a gauntlet of battles in order to weaken him. Intending to kidnap Peter Parker, they find Aunt May instead. It is up to you as Spider-Man to rescue Aunt May and defeat this incarnation of the Sinister Six.

Getting these powers ups will grant you extra Lives.

In the game, you have a Health meter and you start with three Lives. You can get extra Lives by collecting Spidey head power ups, up to a maximum total of six Lives. When you run out of Lives, it’s Game Over, but you can choose to continue and start from the beginning of the stage you died in. As far as I can tell, there are unlimited continues. It doesn’t matter much, because the game uses a Password system to save your progress. Just take note of the password for a given level and you can start your game there as many times as needed.

The game has three difficulty settings available from the start: Easy, Normal, and Hard. The harder the setting, the more damage the enemies can deal. Spider-Man’s damage also decreases as the difficulty increases. There’s a hidden difficulty setting – Nightmare – that you can access via a cheat code. I’ve played this twice in Normal and I can say that it’s a pretty easy game, so harder difficulties are welcome.

Spider-Man has the usual moves that you can expect from action platformers. He can walk left/right, crouch, and jump. He attacks using a punch, and when attacking an enemy, you can keep tapping the attack button to chain a four hit combo. This combo has a variety of different attack animations, but as far as I can tell, these only differ in visuals.

Spidey also has his wall crawling and web slinging abilities too. Similar to the previous game, you can attach yourself to most surfaces by moving yourself against it. You can also wrap around corners, so it’s easy to move from a wall to a ceiling, and so on. Spider-Man has a web meter, but thankfully it only depletes when you shoot a web ball. Unlike the previous game, you can only shoot web balls while standing. These web balls don’t do damage, but they’ll incapacitate enemies and most bosses for a few seconds. Spidey can also web swing in mid-air, which thankfully does not use up webbing.

The Spider-Sense is used in an interesting way in Spider-Man 2: The Sinister Six. Staying put for a couple of seconds will trigger the Spider-Sense animation, followed by an arrow that indicates the general direction that you should be going. This is quite handy, because the stages in this game are quite large. Because of the Spider-Sense, there’s little danger of getting lost.

The Spider-Armor makes an appearance in this game.

Finally, if you get the Armor power up, Spider-Man dons his Spider-Armor. This makes Spider-Man invincible to anything for around ten to fifteen seconds. There’s an armor icon in the HUD that will show you how much time you have left. It’s best to rush forward when in the Spider-Armor.

Since the game is all about Spider-Man’s battles with each of the Sinister Six, let’s talk about that. I love the set up that they used. Essentially, Spider-Man is lured to a location where he’s going to battle one of the Six. Supposedly, these locations are beneficial to the villain who awaits there. I like that the developers used real New York locations, as well as locations known in the comic books, as stages.

So you have to go to Coney Island, a pier (the only generic location), the Empire State Building, Madison Square Garden, and Central Park. I won’t spoil who you end up facing in these locations, in case you decide to play the game yourself. You may know who the Sinister Six are, but you won’t know the order except for the two in the image below.

Unfortunately, the actual battles with the Six are lackluster. Each Sinister Six member only has one or two attack patterns, which are quite easy to learn and adjust to. I only had trouble with the final boss battle, and that’s more because I couldn’t quite grasp the hitbox of Spider-Man’s jump kicks. Even in Hard difficulty, most of the bosses are quite easy to beat.

I also have to comment on the roster used. I was surprised to see the original six members except one. So the game uses Mysterio, Sandman, Vulture, Kraven, Doctor Octopus, and Scorpion. I’m surprised to see Kraven here, since he’s been dead in the comic books for quite a long time already. Normally, he’s the original member who gets replaced, not Electro. They were one member away from having a comic-accurate team.

Stages also look really good, with a lot of detail added in the backgrounds. Although, they do tend to get repetitive. It doesn’t matter how large a stage is if each area looks the same, and a lot of the stage assets and layouts are reused here. Because of this, it feels like the developers had some sort of storage space constraint.

I can see this from the game’s music too. The stage tracks are good, but there’s only a handful of them. I wish each stage had it’s own distinct track, but they get reused too. The game’s sound effects are decent, at least for the standards of the Game Boy Color. 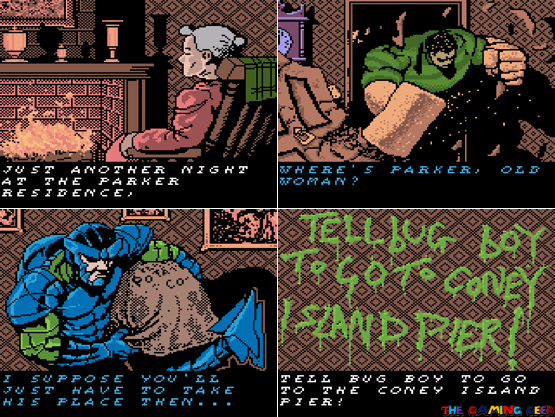 This is how the Sinister Six were able to get Spider-Man to chase after them.

I do love this game’s presentation values. The game makes use of a lot of comic book style art and while some of them could use a little cleaning up, most of them look great. What really stands out is the game’s opening sequence. Similar to the previous game, they alternate cutscenes with the company logos, which works great in building suspense for the game’s storyline. It’s better to just show you with this video.

This is probably one of the best opening scenes I’ve seen in a Game Boy Color game. Definitely worth the effort of capturing video for.

Comparing the First Game to the Sequel

It’s hard to talk about Spider-Man 2: The Sinister Six without comparing it to the previous game, so let’s do that. Sequels are supposed to improve on the previous game and address it’s flaws. In some ways, this game does that.

Despite having large stages, you won’t get lost in this game, unlike in some of the previous game’s stages. The Spider-Sense helps a lot here, but the level design of this game also doesn’t have a lot of long winding paths leading to dead ends. Doing away with the small open world also makes progressing more straightforward than in the previous game.

Doing away with the upgrade system and additional equipment also makes for a simpler game. In the previous title, the game is much harder when you don’t find all of the stat upgrades. And some boss fights can be impossible without the web upgrade. But removing these also gives little incentive for exploration. In this game, the only benefit to exploring is the possibility of finding extra lives.

The previous game also has smoother mechanics. I had a hard time controlling Spider-Man’s jumps in this game. There’s also a quirk when dropping from the ceiling – instead of facing in the same direction, Spidey ends up facing the opposite direction when you do this. This took a while to get used to.

The biggest loss involves the game’s story. In the former, you didn’t know who was behind everything and what his plan was until near the end. This game is very straightforward when it comes to its story. In this aspect, I think the first one is superior.

Despite some elements that were done better in the first Spider-Man game for the Game Boy Color, in my opinion, Spider-Man 2: The Sinister Six is a strong follow up. Making the game simpler and using a more straight forward game design makes this sequel a lot more accessible to players. This game does feel like you’re stepping in the shoes of Spider-Man, doing whatever a spider can in a handheld sort of way. It’s on the easy side, so feel free to take this game on in Hard or Nightmare difficulty.

Being a Game Boy Color release can make it easy to overlook this game, but if you’re a Spider-Man fan and you like playing classic video games, don’t hesitate in giving this game a try. It’s a fun experience, even if it won’t pose much of a challenge to seasoned gamers.