Superhero games are usually based on Batman, Spider-Man, or the X-Men, so when I saw that there was a game based on Catwoman for the Game Boy Color, I knew I had to try it. I was especially curious about this game because Catwoman is generally known as a villain. I played this recently and I’m here to talk about my experience with the game. 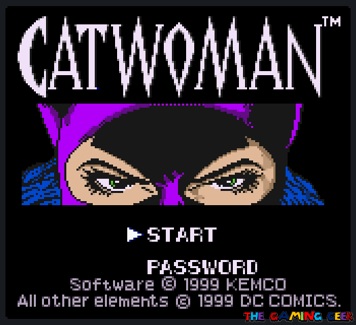 Title screen for Catwoman for the Game Boy Color.

Catwoman is an action platformer developed and published by Kemco. In this game, we step into the shoes of the titular character as she goes in pursuit of a special artifact. Throughout her adventure, you’ll come across characters from the Batman universe, as well as her own enemies. 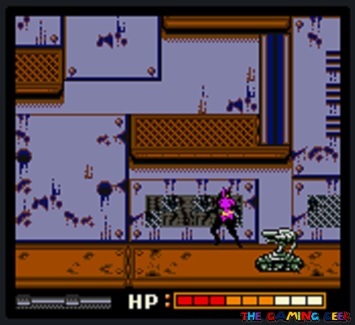 Catwoman can hide from enemies by pressing herself against some walls in the background.

In this game, you can jump, crouch, and use the D-Pad to move. As a cat burglar, Catwoman has additional moves at her disposal. If the background has no obstructions like boxes, she can press against the wall to hide and avoid the enemy’s attention. While crouching, she has an evasive backflip that I’ve never been able to effectively use. When close enough to an overhead surface in the middle of a jump, she can use her whip to swing across  large distances. You’ll definitely need to master using the whip, as the game will require heavy use of this in later levels. 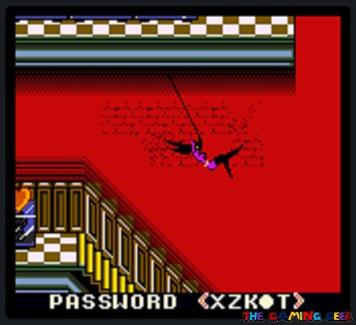 You’ll need to use your whip a lot to progress in this game’s levels.

Catwoman has more tricks up her sleeve to help with platforming. She can grab ledges if you jump at the right spot. Doing this is tricky, but eventually you’ll get the hang of it. She automatically pulls herself up so if you’re not careful you can be vulnerable to enemies. 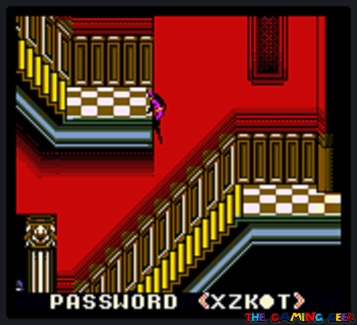 You’ll need to use this move a lot to reach higher areas.

Finally, she can do a wall jump. In this game, this also happens automatically as long as you are holding down the jump button. Catwoman can bounce off of walls like a ball with this. You’ll also need to get used to this move, as you’ll need to do this a lot in later stages.

Catwoman also has a variety of attacks at her disposal. It sounds like a good thing, but the way this was implemented is problematic. You have use just one button for all her attacks. Pressing the attack button while standing could result in a punch, a kick, or a low sweeping kick. While crouching, attacking could mean a short low kick, a stretched mid kick, or a jumping uppercut. I was never able to figure out how attacking works, so I just attack and hope I get the right outcome.

The first level is set in a museum, where Catwoman is trying to steal an artifact.

Aside from lacking control over her attacks, the lag between her attacks is a little too long. Sometimes, I’m wailing on an enemy but because of the lag, they are able to attack before my follow up, which leads to my second complaint. For some reason, Catwoman just flies off like a rag doll every time she takes a hit. This really frustrating if you get sent off some hard to reach platforms and would have to now repeat a series of difficult jumps that you had just recently overcome.

Whenever you hit a ceiling during a jump, you bounce right off it and get sent downwards. Similar with my previous complaint, my biggest issue with this game has to do with mechanics that result in repeating challenging platforming sequences over and over. It can get annoying to be able to do some tricky platforming, and then to have to do it again because you bounced off a ceiling or an enemy attack.

Level Design and Other Game Details

Levels are split into several different sections, and sections usually come in two forms. You have your standard horizontal corridor that has you moving from left to right. You also have large, square-shaped sections that operate like a maze. In these sections, you need to find the exit that leads you into the next section.

Because of how the first two levels were designed, I enjoyed the first quarter of this game despite my issues with the game’s physics and controls. The first level takes place in a museum where Catwoman’s target artifact is being kept. The game almost feels like a Metroidvania with all the exploration needed in order to find the artifact. The second level is a side-scrolling chase sequence across the Gotham rooftops.

Changing the color palette in the sewer levels to show the lighting change was a small but good idea.

From the third level onwards, the game felt quite repetitive for me. The locations and settings are different, and the visuals are too. But these levels are really just a lot of the exploration sections with different layouts and tiles. It just feels like the game goes on and on, with one exploration section right after the other. A little more variety in the level design would have helped. One idea is to include vertical sections that require lots of wall jumping. Thankfully, the game has a generous password system that also keeps progress from within levels, so you don’t have to start at the beginning of each level if you need to stop playing.

Catwoman uses a lot of static cutscenes in between levels, which work effectively in telling the game’s story. The art in these is good, and Catwoman specifically is drawn well. I wish they had used comic book word balloons in these to make them look like comic book panels, but I’m happy with what the game has.

I don’t know much about Catwoman’s backstory, so I couldn’t recognize some of the bosses in the game.

The in-game graphics are decent. Catwoman’s sprite is detailed and her actions are illustrated well. Stages have sufficient detail in the backgrounds and platforms. The regular enemy sprites have enough detail, so it’s easy to identify them. However, the sprites used for bosses could have been done better. They are drawn from the side, so you don’t see a lot of detail. Actually, Catwoman’s sprite is drawn the same way. But in her case, I understand that this differentiates her normal pose from how she looks when she’s hugging a wall.

The game takes you to various locations, including a hidden base and a forest.

The music of this game is so repetitive. Levels have different themes, but the sequences of notes are too short before they are repeated. If the themes were a little longer, it would have sounded better. The repetitive music actually makes the repetitiveness of the levels feel worse.

Catwoman tried some neat ideas, like having evasive maneuvers and having an emphasis on exploration instead of platforming. However, issues with executing other aspects of the game ruins the gaming experience. Some levels feel like they just go on and on. It can be annoying, even frustrating, to keep repeating difficult platforming sequences because of the game’s physics.

It’s not a broken game though. This game is playable and while the mechanics take some time to get used to, you get used to them eventually. The game is short and with a password system, is quite beatable. There are better games out there, but if you are a Batman or DC Comics fan and you want to play a game based on that franchise, it’s okay to try this game out.