A superhero video game based on Marvel Comics’ Blade is guaranteed to get my attention, especially since this game was also based on the film that starred Wesley Snipes. Yes, that Blade – what is considered by some to be the film that made superhero movies viable. The Game Boy Color version of this game somehow escaped my attention back in the day, even if I was very much into that device. When I saw that this was co-developed by HAL Laboratory, I knew I had to sink my teeth into this title. Let me talk about my experience with the game. 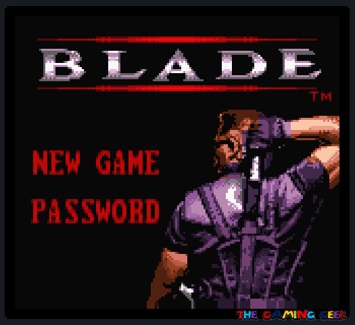 Title screen for Blade on the Game Boy Color.

Blade is an action game co-developed by the aforementioned HAL Laboratory and Avit Inc. for the Game Boy Color. Somewhat a late tie-in to the Blade film released in 1998, this game prominently features images of that film’s version of Blade and Whistler. I’m calling this an action game because this title has shooting sections, brawling sections, and sword dueling sections. 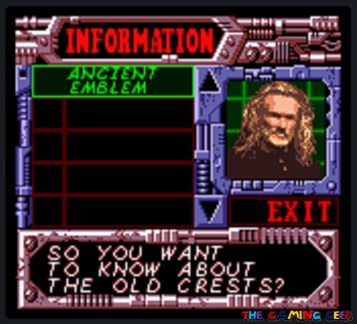 Whistler is your source of lore and information in this game.

You can choose which levels to play on a Map selection screen. Only three levels are available at first, but more become available as you progress. Some levels can only be unlocked after finding a specific item. On the Map selection screen, you can also choose to visit Home, where you can talk to Whistler about the game’s lore. 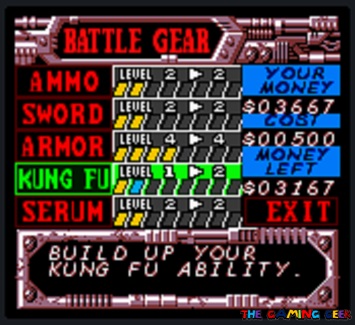 You can spend your earnings by upgrading Blade’s gear and abilities.

From Home, you have access to the Workshop where you can spend money on upgrading your equipment or moves. You earn this money after every level, depending on how well you perform. Retaining as much health, serum, and throwing glaives as you can, while killing as many enemies, will give you more money.

Throughout all the sections is a Serum meter which slowly depletes. This is supposed to act like a time limit but in my experience, I was able to complete all the sections before the Serum meter even reached the halfway mark. You don’t have any lives nor continues in this game. However, there is a password system. Blade also has two health bars and these are refilled every time you change sections.

Each of the game’s levels offer some combination of shooting sections and brawling sections, then usually end in a sword duel with the end level boss. The game’s shooting sections play out almost like an on-rails shooter, except the stage is fixed in place. Enemies can attack you from the background or foreground.

You need to shift your attention between the enemies in the background, as well as the foreground in this game’s shooting sections.

Pressing A brings up the crosshairs, which will allow you to shoot in the background. The D-Pad lets you move the crosshairs. Pressing B lets you attack the foreground. Your aim is based on the direction where Blade is facing, which is also controlled by the D-Pad. Enemies can attack you from the left or right, so you’ll need to turn in that direction to counterattack. Pressing both A and B will do a shotgun blast which hits everything onscreen.

Blade displays his hand to hand combat prowess in the game’s brawling sections.

The brawling sections are side-scrolling stages without any platforming. Blade can’t jump in these. A is the attack button. You can vary your attacks by pressing A alone or with Up or Down. The B button blocks. Blocking lasts for only a second, so you need to time it properly. If you get surrounded, you can tap Left or Right twice to dash in that direction. This move passes through enemies. Finally, you can throw a glaive by pressing the A and B buttons together.

In the early levels, these sections allow for some exploration. You can enter different rooms. Some of them may have special items or  secrets, so make sure you take the time to check them out.

Sword Dueling with the Bosses

The final style of this game is a sword duel. This plays closer to a one on one fighting game, where you can now block indefinitely. You can also jump in these sections, but I found this to be ineffective in my experience. As what you’d expect from boss battles, your opponents in these sections have special abilities that can give you a lot more trouble than the regular enemies.

The B button still blocks in these sections, and the A still attacks. Pressing A alone, or holding Up or Down also changes how you swing your sword. Pressing A and B together will do a special dashing attack. Tapping Left or Right twice will do a lunge, and you can press A in the middle of it to slash with your sword. 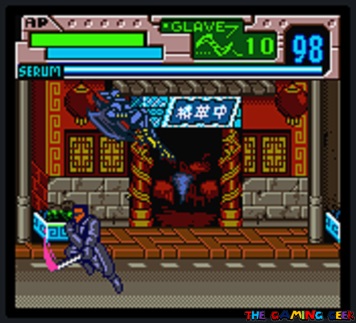 Blade fights the more powerful villains with his sword.

To be honest, I hit the proverbial video game wall with the first boss fight. These boss fights can be brutal if you don’t know what to do, as they can continue to bombard you with different kinds of attacks. Whatever the boss, the strategy that worked for me was to be aggressive on offense and just keep on slashing at them.

The vampire bosses in this game look very similar to each other.

These boss fights are a highlight of this game, but I do have one complaint. It seems that the strongest vampire forms in this game look like gargoyles. If you disregard the color palette changes and the head sprites, they all look the same. Not all bosses are in this form, but fighting too many of them does feel a little repetitive.

I was very impressed with this game’s visuals. The sprites are quite detailed, and so are the levels. Even with the limitations of the Game Boy Color, the developers were able to make the most out of it’s capabilities. Blade looks good and is well animated. Regular and boss enemies are also quite detailed. It’s easy to tell each enemy apart. You can even make out what the enemies are supposed to be, like the police vampires.

You face different kinds of enemies this game. Because of detailed graphics, you can easily tell them apart.

When it comes to sounds, this game is decent. Sound effects are a good fit to the actions being depicted. The different theme music is good too. I think I just don’t like the sound capabilities of the Game Boy Color compared to its predecessor, and that has an effect on how much I appreciate this game’s audio.

The opening cutscene effectively establishes who Blade is for the player.

What I really like a lot in the Game Boy Color version of Blade is the game’s presentation. The developers did a lot of things right here, from the use of comic book style word balloons for dialogue to the use of Wesley Snipe’s likeness as Blade. Using blood red font against a black background for some of the text crawls was also a really good idea, selling the game’s horror theme more.

I’m glad I had the chance to play Blade because this game is a hidden gem, in my opinion. It’s a little short, and the boss battles are a sharp difficulty spike for newcomers. But I enjoyed the variety of this game’s gameplay mechanics. The excellent graphics and presentation made this quite a treat to play. The password system will allow me to replay my favorite levels any time. I highly recommend this to anyone who is interested in older, superhero-based video games, or to anyone who wants to play Game Boy Color games.