Despite being a big fan of the DC Animated Universe, I was never able to follow Batman Beyond closely. I remember liking the series but because I was much busier then, I couldn’t watch episodes religiously. So aside from not being quite familiar with the Terry McGinnis version of Batman, I only have a vague recollection of the feature film Batman Beyond: Return of the Joker. 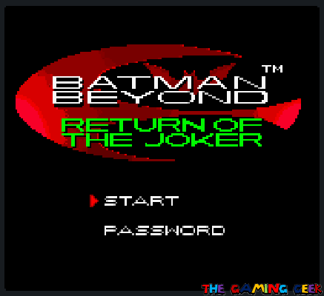 Title screen for Batman Beyond: Return of the Joker for the Game Boy Color.

But even if I’m not that familiar with the franchise, the concept of the film and the video game tie-in was intriguing. What will happen when Batman’s successor meets the original’s worst enemy? I didn’t watch the movie, but I played the Game Boy Color version of the game. Let’s talk about it.

Batman Beyond: Return of the Joker is a beat ’em up game developed by Kemco and published by Ubisoft. Aside from the Game Boy Color version, they also released versions for the Playstation and Nintendo 64. The game follows the events of the similarly-titled feature film, with you taking on the role of Terry McGinnis, the Batman of the future. While fending off an attack by the Jokerz gang, both Batman and the now-retired Bruce Wayne are confronted by a man who claims to be the original Joker.

Unlike most beat ’em up games, Batman Beyond has some verticality in it’s stage designs.

The game mostly adheres to beat ’em up genre game design basics. Stages are on a plane instead of flat platforms, where you’re able to move into the background or foreground. Unlike most beat ’em up games, this game features some verticality in the stage design. In some sections, you’ll need to jump on elevated platforms in order to reach higher floors. Finally, the game has a password system that will allow you to continue your progress from different points in the game.

In Batman Beyond, the new Batman has a typical three hit combination which ends in either an uppercut or side kick. Strangely, if you tap the attack button thrice, this combination will execute even if you’re not hitting any enemies. Also, there’s a lag after the final attack which can leave you vulnerable. So, it’s not a good idea to mash the attack button randomly. There’s an upside to this as well – you can attack your enemies through walls because Batman’s side kick has a really long range. 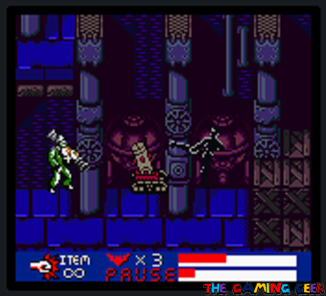 One of the strategies I used was to keep walls between myself and enemies.

Batman also has a gliding move that he can use to let himself jump farther. While there aren’t any pits in this game, there are some stage hazards that you’ll need to jump over. You’ll also have the need to jump from one elevated platform to another, so this move will be useful in some situations. 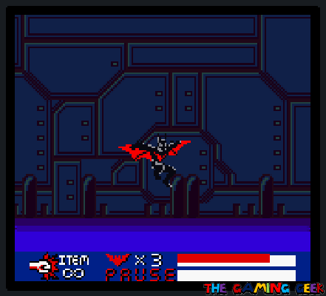 Batman has the ability to glide over short distances.

He doesn’t have any other attacks, unfortunately. To compensate, the developers gave him several gadgets that he can use. Some of these are weapons that he can use in battle, such as the nunchuks and battle staff. The Jet Boots will allow you to have limited flight, and the Shield is used defensively. 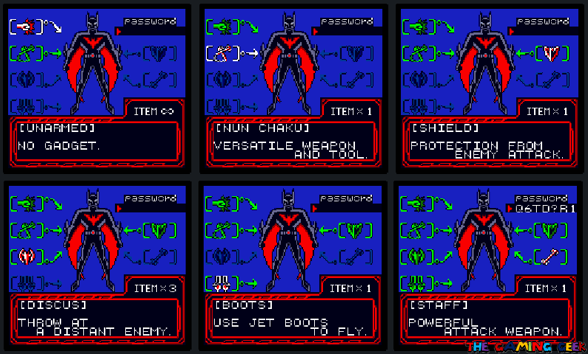 The future Batman has new toys in his arsenal of gadgets.

You’ll come across power ups that will give you these gadgets as you progress in the game. They are consumed after a certain amount of uses, so I used them sparingly. And to be honest, I really didn’t need to use any of the gadgets in my playthrough.

Another thing that differentiates Batman Beyond: Return of the Joker from other beat ’em up games is how they used the concept of stealth in the gameplay mechanics. As you’re making your way through the game’s stages, you’ll come across individual enemies. You need to sneak up to them and beat them up before they can spot you. If you fail, and they notice you, they’ll call reinforcements in.

Stage one of Batman Beyond.

The idea itself is okay, but how it’s executed in this game is painfully annoying. The first problem is, you only have two types of regular enemies in each of the stages (except the final stage, which features a third type of enemy). So you’ll keep facing the same exact two enemies every time this happens, until you make it to the next stage where you’ll face a new pair.

There isn’t enough variety in the enemies either. Sure, they may look different, but they don’t behave differently enough. The best beat ’em up games address the repetitiveness of the genre by sending you enemies that you’ll have to approach in different ways, and this game fails miserably there.

The second stage is in one of Bruce Wayne’s buildings.

To make the repetitiveness worse, the game plays the same exact music for these encounters, no matter which stage you’re on. So I don’t remember any of the stage tracks, because the encounter music played around 70% to 80% of the time I was playing this game.

You could say that I should be more stealthy, but it’s easier said than done. This is a beat ’em up game, there isn’t anything to hide behind. Batman can hug the walls, but he can’t move that way. The way they implemented stealth in this game just doesn’t work.

In terms of graphics, Batman Beyond: Return of the Joker is mixed. It looks decent in terms of quality, especially Batman’s sprite. I don’t know if it’s because I’m not quite familiar with the property, but I have a difficult time identifying what some of the regular enemies are supposed to be.

The third stage of the game takes place in the ruins of Arkham Asylum.

There’s this yellow fire-breathing enemy in stage three for instance. I can’t tell what that’s supposed to be. Is that a snake-headed humanoid? I don’t know. The Jokerz gang members featured in the movie are all in here as boss characters. Yes, Bonk, Woof, Ghoul, Chucko, and the Deeds are all in here. I’m just not sure how accurate their depiction is.

My biggest complaint about this game’s graphics isn’t about the quality. The game’s stages look good, but the backgrounds are quite repetitive. It’s like you’re not really moving to different areas, even if you are. It’s like the developers were just creating different stage layouts using the same tiles.

The music, at least what I can remember, is decent. I’ve never really liked the sound quality of the Game Boy Color, so I can’t fault this game for it. It’s just unfortunate that you’ll hear the enemy encounter music for most of your playthrough.

However, my time playing Batman Beyond: Return of the Joker wasn’t a complete waste. I did enjoy one aspect of the game a lot: the story. Thankfully, the developers didn’t spare any expense in making sure that the story wasn’t cut short in any way. Without watching the film, I think I have a good grasp of it’s story, thanks to this game.

My favorite aspect of this game is it’s story.

Essentially, Bruce Wayne has already stopped being Batman due to his age. He’s now the mentor to the new Batman, Terry McGinnis. Out of nowhere, a man claiming to be the Joker shows up and both the former and current Batman have to figure out who this guy is. So even if it was a slog, I kept playing because the story hooked me. It helps that the story was told via detailed cutscenes. The developers used as much dialogue as they needed, and used art that was also quite appropriate.

Beat ’em up games are already notorious for being repetitive, and Batman Beyond: Return of the Joker is an example of how badly repetitive games of this genre can get. He’s got a limited move set. You fight the same enemies over and over, and each type behaves almost exactly as the others. You hear the same encounter music every single time. Every room you go into looks the same as the one you just left.

Playing this game was a slog. Normally, I play the retro games that I write about at least twice. I couldn’t finish my second playthrough of this game. It’s not a broken game by any means, but the repetitive and generic nature of it just made me tap out. I might say it’s worth playing this game for the story, but you should just find a copy of the film instead. Don’t waste your time or money on Batman Beyond: Return of the Joker.