Earlier this year, I wrote about five things I didn’t like about The Legend of Zelda: The Minish Cap. But I realized that I didn’t really write about the entire game. I was still in the middle of figuring out this blog’s identity and general format. Well, now that I’ve finally found the approach that I want, I think it’s time that I talked about this game in a more detailed fashion. 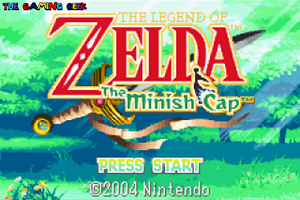 Title screen for The Legend of Zelda: The Minish Cap for the Game Boy Advance.

The Legend of Zelda: The Minish Cap is a top-down 2D adventure game that features Nintendo’s Link as the protagonist, developed by Flagship and Capcom and published by Nintendo. The Minish cap features a new incarnation of Link and Zelda. Instead of having Ganon as the antagonist, that role is filled in by Vaati. A member of the Picori race who became a powerful sorcerer, Vaati wants to become more powerful by obtaining the Light Force hidden within Zelda’s spirit. 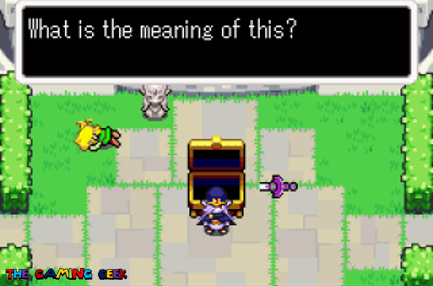 Vaati is the main antagonist of The Minish Cap.

This game follows the standard Zelda formula: Link has to explore the overworld and it’s many locations, and find special items that would allow him to explore restricted areas. Link also has to overcome several dungeons that are filled with many puzzles and guarded by a final boss. 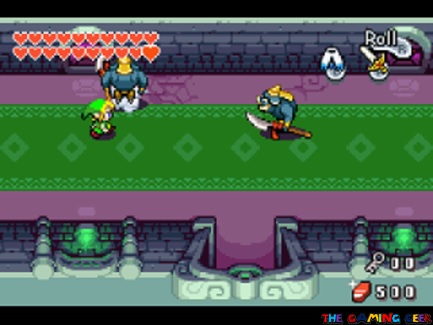 You’ll get to explore different locations and dungeons in The Minish Cap.

As this title is on the Game Boy Advance, The Minish Cap follows a control scheme that’s similar to what we saw in Link’s Awakening. You assign Link’s items to either the A or B button, including his sword and his shield. The R button is permanently assigned to rolling, and the L button is for the new Kinstone trading mechanic which I’ll get to later.

After dealing with three different Legend of Zelda games that had me switching items almost every three minutes, I had hoped that the GBA version would spare me from this. The Game Boy and Game Boy Color only had two buttons, and the Game Boy Advance had four. Unfortunately, the added buttons were dedicated to new mechanics so I still had to keep switching items every three minutes.

The Minish Cap and the Four Sword

Most the Legend of Zelda games revolve around a specific artifact, mechanic, or concept, and this game is no exception. The Minish Cap refers to the Minish cap, a talking hat that not only gives Link gameplay hints and advice, but also allows Link to change his size to microscopic levels and back. 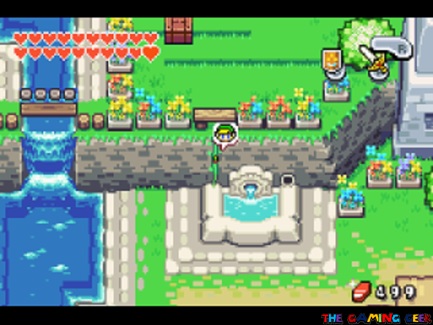 Small Link can get to places he couldn’t access in his normal size.

In this game, this meant one of two things. First, Link shrinks down in size but the world doesn’t. So you’re exploring the world in the same scale, with Link appearing really small. Being smaller allows Link to fit into small holes, walk across really thin planks, or climb up and down roots and vines. However, this also means that Link is too small to climb up elevated ground or even swim across puddles. 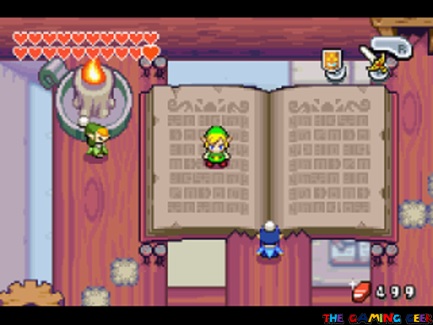 The Picori are small, elf like creatures living in Hyrule.

The second involves Link shrinking in size, but our view is magnified so we see him at his normal size and the rest of the world around him becomes much larger. This normally happens when Link is exploring locations populated by the Picori. This mechanic allowed the developers to use shrinking in the game’s puzzles. 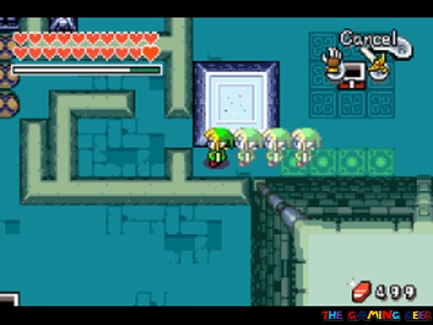 The Four Sword can create copies of Link, in case he needs to push a large obstacle or hit multiple switches at once.

Also, this is the first appearance of the Four Sword in the franchise’s chronology. The Four Sword has the power to make copies of it’s wielder. This mechanic is used in some puzzles, as well as in the final boss fight. To be honest, I was never a fan of this concept and I’m glad Nintendo has stopped integrating the Four Sword in succeeding Legend of Zelda games.

Items are a big part of traditional Legend of Zelda games, and The Minish Cap is no exception. Link needs to obtain several items to complete his quest. A few classics make a return in this game: the Boomerang, bombs, bow and arrows, Pegasus boots, and various swords and shields. The Roc’s Cape makes a return from Oracle of Seasons, allowing Link to jump and glide. He also has an Ocarina in this game, although this version is limited to just one song.

The new items in The Minish Cap don’t add new gameplay mechanics to the game.

The new items are lackluster, in my opinion. The Gust Jar is just a combination of the classic Hook shot and a Deku Leaf or bellows. It can suck in air like a vacuum, pulling objects to Link. Or Link can get pulled to the object, if the latter is firmly attached to the ground. It can also blow air out, helping Link get rid of dust and other light objects. Link can use it to propel himself forward if riding on a raft.

The Cane of Pacci can flip objects over. You can use this on some monsters with tough exteriors – flipping them over may reveal more vulnerable spots. You can fire this against holes in the ground and somehow, store energy that would launch Link upwards and forwards if he jumps in the hole. The Mole Mitts can dig holes in the ground like the classic Shovel, or through soft walls, revealing hidden tunnels.

Some Legend of Zelda games feature a trading mini-game that can get you a special, non-required item. This is how you get the Boomerang in Link’s Awakening and the Biggoron’s Sword in Ocarina of Time. The Minish Cap features a trading game that’s on steroids. 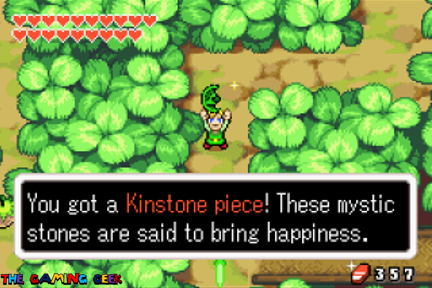 Throughout the game, you’ll come across items called Kinstone pieces. What you’ll get are usually the left halves, and you’ll need to look for NPCs that have the right half of each. Completing a Kinstone fusion will trigger special events – a new treasure chest appearing, new paths get unlocked, new NPCs coming into the game, and so on. 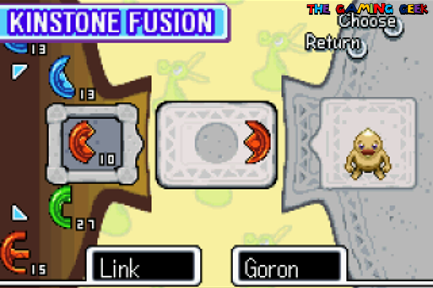 To perform a Kinstone fusion, you’ll need to look for NPCs who have Kinstones.

Sometimes, the NPCs holding a Kinstone half will give you hints when you talk to them. However, there aren’t any hints for most of these NPCs. What’s worse is some of them won’t even fuse with you until a specific in-game event has happened. I ended up talking to each and every NPC every time I did something significant in the game.

These Kinstone fusions aren’t always helpful. Sometimes you’ll just get a whole bunch of rupees. What I hated the most are the Kinstone fusions that would just lead to finding another Kinstone piece. I talked about this in my previous post about The Minish Cap, so check that article out for more details.

I expected The Legend of Zelda: The Minish Cap to be closer to a Super Nintendo game, but Capcom’s design choices made it feel more like the Game Boy and Game Boy Color versions. I also feel that the shrinking mechanic would have been better suited to a home console version. Just thinking about the possibilities of a full Zelda game wherein you’d get to see locations made bigger, or zoomed in, is exciting.

The Kinstone “trading” added a lot of busywork to the game, which made the experience a grind. I hated having to revisit towns and other locations just to check if there was a new Kinstone fusion available. And hiding a Piece of Heart behind the miniatures minigame was brutal, too.

Out of all the Legend of Zelda games that I’ve played to the end, this is my least liked. However, it is still a polished Zelda game, and one of the best games available on the Game Boy Advance. It’s definitely worth revisiting today.