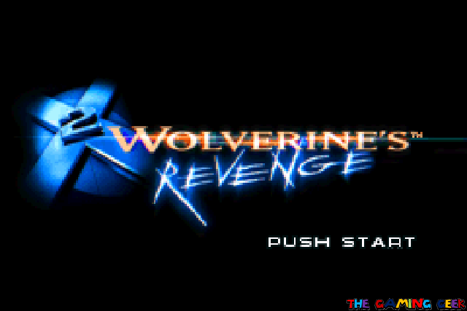 Did it meet my expectations? Let’s talk about my experience with this game.

X2: Wolverine’s Revenge is an action platformer developed by Vicarious Visions and published by Activision for the Game Boy Advance. There’s a version with the same title that was released for the PlayStation 2. Both games were tie ins to the X2: X-Men United, which was the second film in the 20th Century Fox X-Men film series. 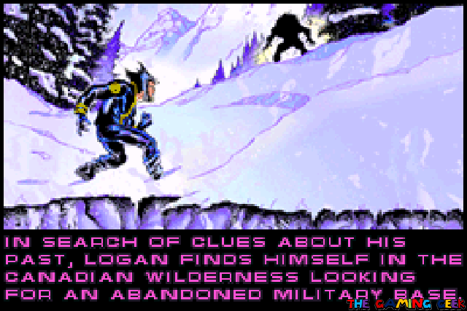 The game starts with Wolverine trying to dig up clues about his past, much like the movie.

However, the GBA version is a tie-in in branding only; the story and the characters fit more with the comic book versions of the X-Men. In the game’s cutscenes, Cyclops and Beast are shown with the black and yellow uniforms used by the New X-Men early 2000s line ups. The start did feel like the game took place at the start of the movie, with Wolverine investigating military facilities for clues to his past. However, he stumbles onto a mysterious plot that involves reviving the Weapon X project.

The game has eight main stages. You can replay a stage that you’ve already beaten, which you may need to do in case you missed a special item or if you need to get extra lives. The game has a save system and four different save slots. It also has three difficulty settings: Easy, Normal, and Superhero. The number of lives and continues that you start a new game with will depend on your chosen difficulty setting. 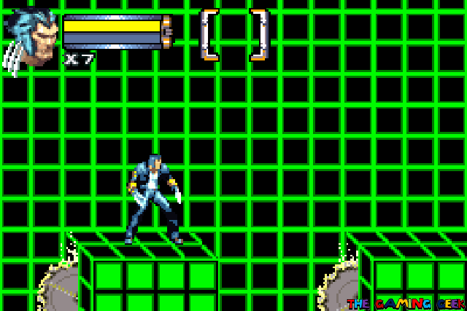 You can practice your skills in the Danger Room.

You can find special “modules” that unlocks a Danger Room stage. Danger Room stages are short areas with a lot of enemies. You won’t lose any lives if you die in Danger Room, and beating a stage will get you an extra Continue as a reward.

In X2: Wolverine’s Revenge, you can do the usual actions that you can expect from this type of game. You can walk to the left or right, crouch, and jump. While standing on the ground, you attack via punches. Tapping the attack button results in punch combos. You can also do crouching kicks and jump kicks. 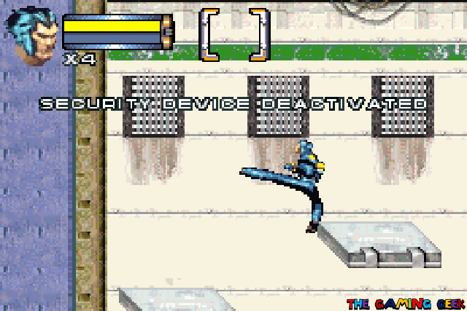 Wolverine does have his claws in this game. You can retract or extend them by pressing the L button. Attacking with your claws will increase your range and does more damage. When you have the claws out, all your attacks will involve them. So why wouldn’t you want them out all the time? 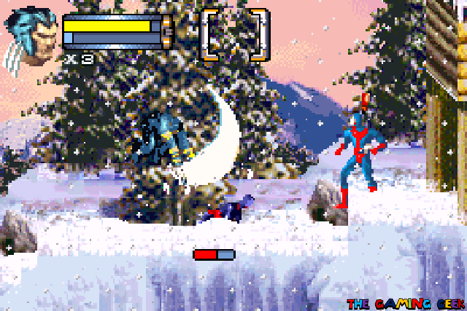 Well, Wolverine’s healing factor doesn’t work when you have his claws out. Yes, his healing powers are here, and they’re represented well. When you have his claws retracted, he regenerates a bit of his health every few seconds. There is no other way to refill the health meter in this game. So you have to choose between healing up or dealing more damage.

Another reason to watch how often you attack with your claws is the Rage meter. The Rage meter constantly depletes itself and is empty by default. Each successful claw attack adds to this meter and when it fills up completely, Wolverine goes into his Berserker Rage. 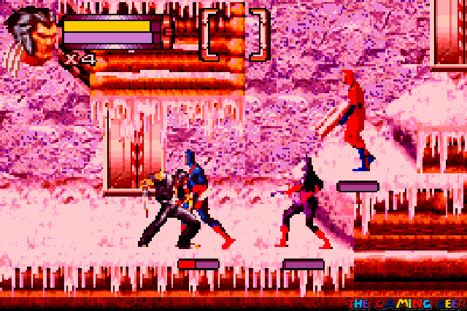 In this mode, the screen flashes red. Wolverine’s damage and range is further increased, and the Rage meter depletes faster. However, Wolverine loses some of his platforming abilities like the wall climb. When the Rage meter is depleted, Wolverine will also get stunned for a few moments. So his Berserker Rage can be an advantage or a disadvantage, depending on the situation.

Special power ups that will grant new abilities are hidden in each of the stages of X2: Wolverine’s Revenge. There are eight in total, and five of these abilities are related to movement. One ability lets you cling to walls using your claws, while another lets you cling to ceilings. You can also get the ability to double jump, perform a slide, or dash. 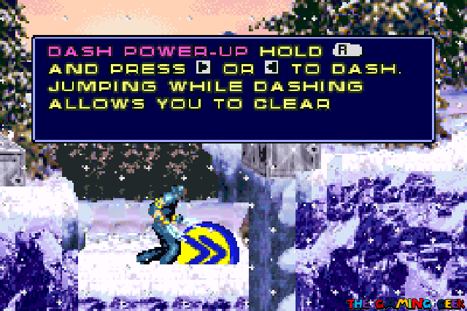 You’ll encounter the Dash Power Up early in the game.

One ability grants Wolverine the diving claw attack which deals a lot of damage. The final two abilities are upgrades to his healing factor and Berserker Rage powers. The former allows you to actively heal at a faster rate, while the latter further increases how much damage you deal when in Berserker Rage mode. In the Pause Menu, you can go to the Power Ups Option where you can check which of the eight power ups you have and still need to find. 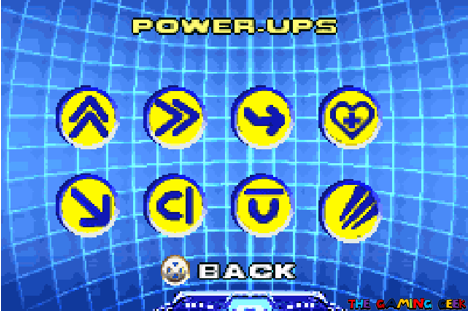 I like the Power Up system of this game a lot. The more abilities you have, the more fun it feels to control Wolverine. The levels also become more complex, to adjust for the new things that you can do. There’s at least one power up that can be missed on a playthrough. Thankfully, it’s not one of the critical ones. 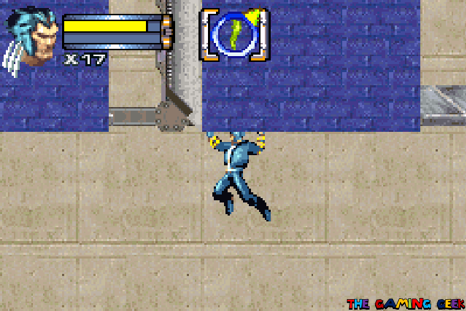 You’ll find yourself using Wolverine’s new abilities a lot in the later levels.

I don’t see anyone beating this game without finding the Dash, Wall Cling, Ceiling Cling, Somersault (double jump),and Slide abilities. These moves are required to get past some of the obstacles that will be in your way in the later stages.

When it comes to superhero video games, I expect a lot out of it’s boss battles. And X2: Wolverine’s Revenge generally did not disappoint. In the game, you face his arch enemy Sabretooth several times. I’d normally complain about it, but these multiple encounters were done well. You don’t actually fight him in two of these encounters. Instead, you need to chase after Sabretooth. Fall too far back and you lose a life. Move too close and Sabretooth will notice you (you lose a life). 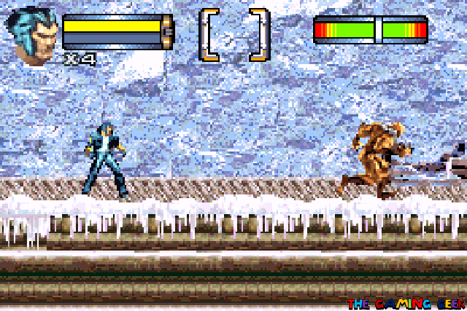 The chase meter at the upper right indicates how far from Sabretooth you should be.

He’s the end stage boss twice, but I’m okay with it. Here, Wolverine actually gets to upgrade his powers, so the second fight with Sabretooth feels very different from the first. Pyro also makes an appearance, and he’ll fight you with different ways of using his flame control powers. 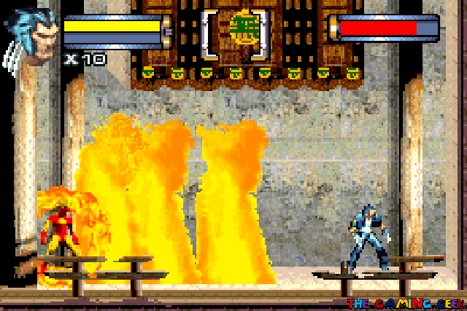 My only complaint regarding the boss battles involves the fight against Omega Red. He is quite tough, and his fight requires perfect precision at times. I think his battle is too difficult, and I predict that a lot of people will get stuck on his stage. 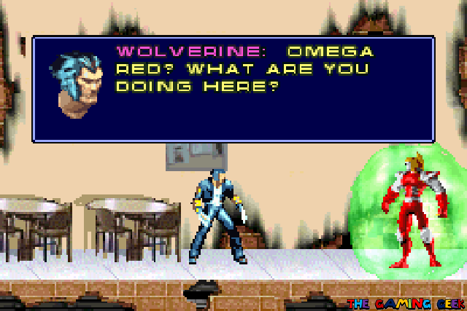 Omega Red is, in my opinion, the toughest boss in the game.

I won’t spoil who the final boss is. Who the developers chose as the final boss surprised me, but at the same time I thought it was an apt choice. I also liked how the final boss followed a similar design to another X-Men video game that I played recently.

The graphics of X2: Wolverine’s Revenge are okay, but I wish they were better. Everything just looks quite pixelated. The sprites are detailed and are animated well. I just wish they had clearer definitions. Maybe thin black outlines would have helped? The lack of clarity made it hard for me to make out what some of the regular enemies are.

The stages of the game look okay and represent their locations well. I just wish that when you move in a specific section, that the backgrounds would change somewhat. Some of the stages here have that same-ish generic feel. I did like how the in-game camera would zoom out if you were exploring a large area. This helped me see more of the stage. 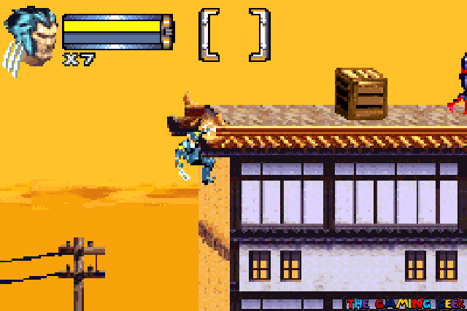 The camera automatically zooms out when you’re in a large area.

I did appreciate that the developers were able to include themes from the film into this game. There are also some original tracks in the game that aren’t related to the X-Men 2 movie, and they were pretty decent. Stage themes fit their respective settings. All the sound effects were appropriate and satisfying. 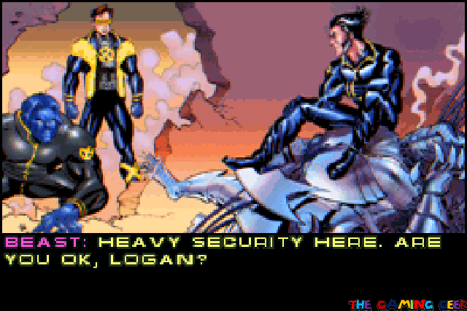 The game uses a lot of comic book style illustrations.

In terms of presentation, the developers used a lot of comic book illustrations for the game. This really helped my immersion and made me feel that this game isn’t just a cash grab. The illustrations used for the cutscenes helped me appreciate the game’s plot, and it was nice to see several X-Men members in them. 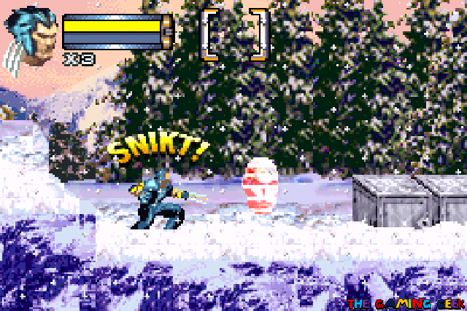 The game also uses the X-Men license in other areas. The game’s help system is represented by telepathic messages from Prof. Xavier himself. And Wolverine fans are going to love it every time he extends his claws.

All in all, I did have fun with X2: Wolverine’s Revenge. It has a decent plot and good mechanics. The level design gets better as you get farther in the game. And the more abilities Wolverine learns, it becomes more fun to play as him. My only complaints about the game involve it’s graphics and relatively short content.

I can get over the sprite quality, but I do wish that there was more to this game. Maybe offer some unlockable bonuses in addition to extra continues after beating the Danger Room sessions? A boss rush mode? One or two additional levels at the end of the game?

Despite it’s shortcomings, X2: Wolverine’s Revenge is good enough. It’s the first good X-Men game to be released on a handheld! I definitely recommend this title to anyone who enjoys playing superhero games on the Game Boy Advance, especially fans of the X-Men or Wolverine.