I wasn’t particularly interested in the Game Boy Advance version of X-Men: The Official Game at first. I wanted to play the Game Cube version because I read that the game shows why Nightcrawler wasn’t in the X-Men: The Last Stand movie. Well, I had fun with X2: Wolverine’s Revenge so I decided to give this game a shot. 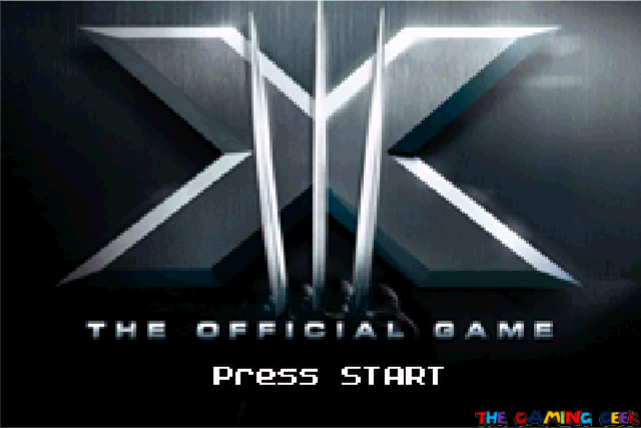 Title screen for X-Men: The Official Game for the Game Boy Advance.

X-Men: The Official Game is an action platformer that is based on the 20th Century Fox X-Men film franchise. The Game Boy Advance version was developed by WayForward Technologies (the company behind the Shantae games) and was published by Activision. While the box art and promotional material features Wolverine with his claws sticking out in the form of “III”, the game tells the story of events that take place in between X2: X-Men United and the Last Stand.

In this game, you’ll be able to play as Wolverine, Iceman, Colossus, and Nightcrawler as they tackle a special mission given by Professor X: to obtain parts from Stryker’s version of Cerebro so they can fix the original. And let me just say that, aside from Wolverine getting another starring role, I love the characters chosen for this game. Iceman and Colossus never really had enough time to shine in the movies. I also like how Nightcrawler is getting one final adventure before leaving the team. 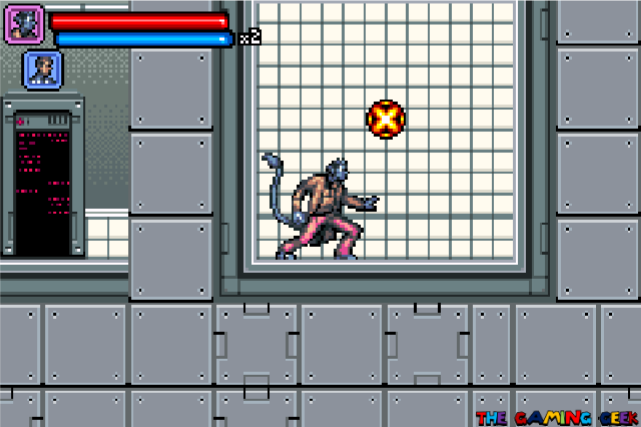 This can revive one KOed team member.

You can swap between each character as you play the game, and each character has his own health meter. They only get one life each, so if someone dies, you won’t be able to use them. Getting the X power up revives one KOed member of you team, and there are several of those hidden in the stages. When all members are dead, you will have to restart from the beginning of your current section. The game has an autosave feature with three save slots, so you don’t have to worry about Game Overs here. 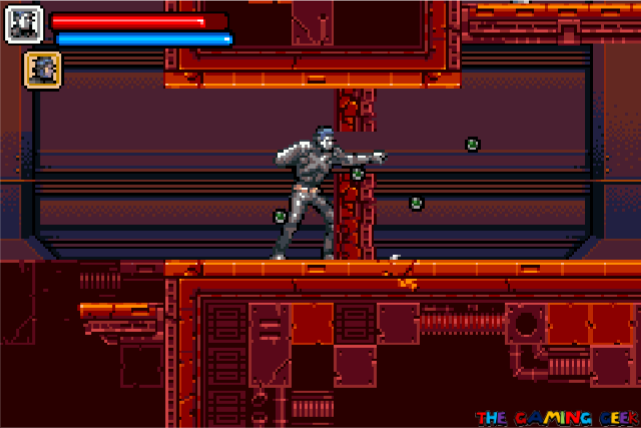 Colossus can punch through some walls.

Pressing Up and B does an upward attack. This is important, especially against flying drones that will pepper you with gunfire if you don’t get rid of them. You can also do this in mid-air. 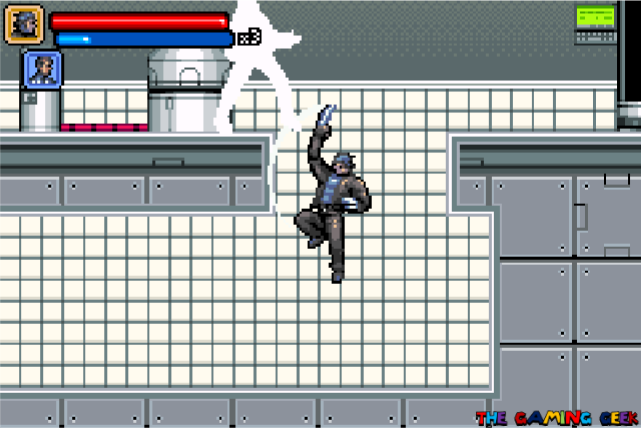 Up attacks are very useful.

Pressing Down and B does a downward attack. This isn’t a crouching attack, so you’ll get hit by enemy fire that you would have avoided if you remained crouched. To be frank, this isn’t very useful (aside from Iceman’s version). After you press B, if you press backwards quickly, the heroes except Iceman will grab an enemy beside them and throw him behind you. It’s animated well but I also didn’t find this to be useful 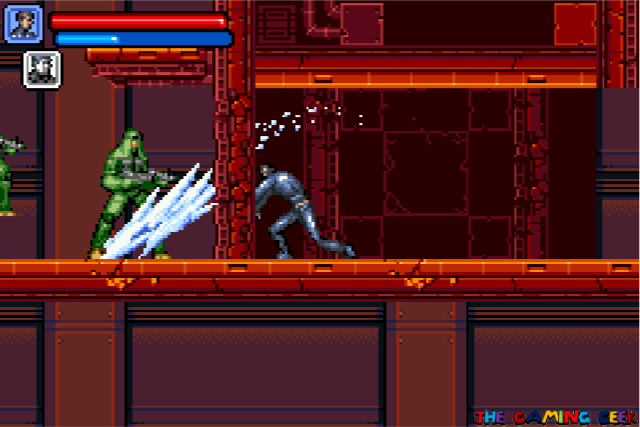 Iceman’s down attack has the longest reach.

Finally, pressing B and then A shortly after triggers each character’s special attack. They won’t drain any energy and can be done as often as you want, but they’ve got wind ups and can be cancelled by enemy attacks so you can’t rely on spamming them.

As mentioned before, you can play as any of the four X-Men in X-Men: The Official Game, and I like how the swap mechanic was implemented here. Pressing and holding the L button will bring up a menu at the upper left corner of the screen. Press the appropriate D-Pad direction to swap to your desired hero: Left for Iceman, Down for Colossus, Right for Wolverine, and Up for Nightcrawler, who gets unlocked a couple of stages in. 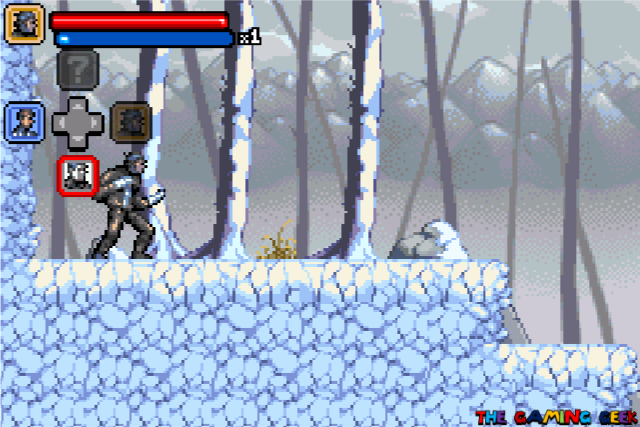 Hold the L button down to see what button to press to swap to a different X-Men member.

The game also offers a quick swap feature. Normally, you’ll see another X-Men icon underneath your current character’s icon. Tapping the L button quickly will swap you with that character. This will allow you to swap on the fly and also makes it easier in case you only want to swap between two characters.

Each X-Men has his strengths and weaknesses. People say that Wolverine is the only useful character but I disagree. I’ve used each one often enough to say that all four contributed. 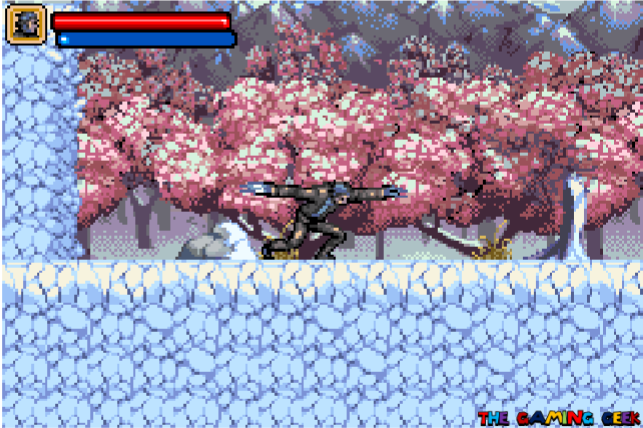 Wolverine has the second highest damage output. His special attack is a double stab. What makes Wolverine really useful is his healing factor. He regenerates health over time whether he’s active or not. What I do is to use him as my main character. Once he’s taken too much damage, I’ll just swap to someone else until he heals up. 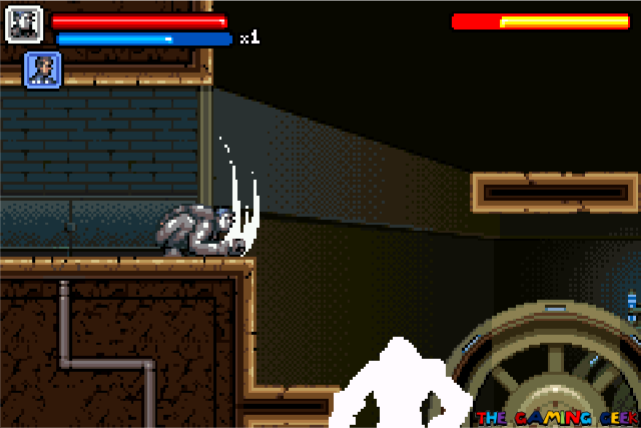 Colossus does the highest damage, but his attacks are slow and he has the lowest jumps. He can take a lot of damage though, and he can destroy some walls and floors. His special attack is a ground pound which can deal damage from afar. His normal attack combo also knocks down enemy soldiers. I usually use him to soften up bosses. 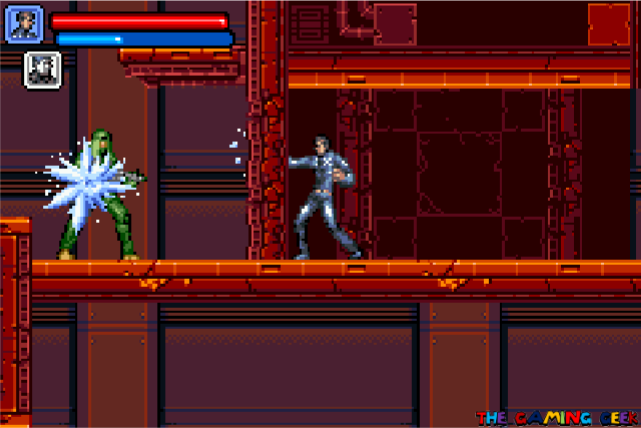 Iceman has the weakest attacks but his reach is the longest. His special attack is what really makes him useful. An ice shard that he can shoot from afar, it deals low damage but you can do it from a safe distance. It hits enemies for as long as you can see them onscreen, and you can do this at different elevations and even through thick, unbreakable walls. 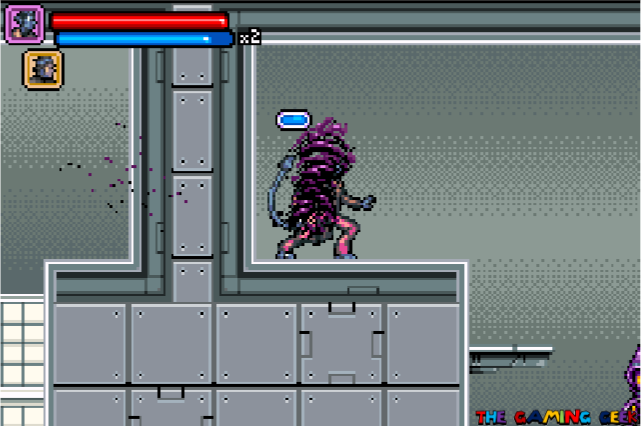 Nightcrawler also does weak damage. His up attack is a backflip that also works as an evasive maneuver. He can teleport a short distance in four directions and he deals damage to enemies while he’s teleporting. He also seems to run faster than the others. Enemy attacks deal more damage to him though, so he’s the character that I used the least.

One thing that’s important to address about X-Men: The Official Game is the enemies that you’ll fight in the game. I think that this game needed a few more different regular enemies because even before the middle of the game, you’d have already seen every regular enemy that this game has. If I can recall correctly, you will face the following: three different types of special forces soldiers, flying drones, rabid dogs, human-sized Sentinel robots, a spider/bug like robot, and ninjas that only appear in the first mission. After fighting these same enemies over and over, the game did feel a bit repetitive. 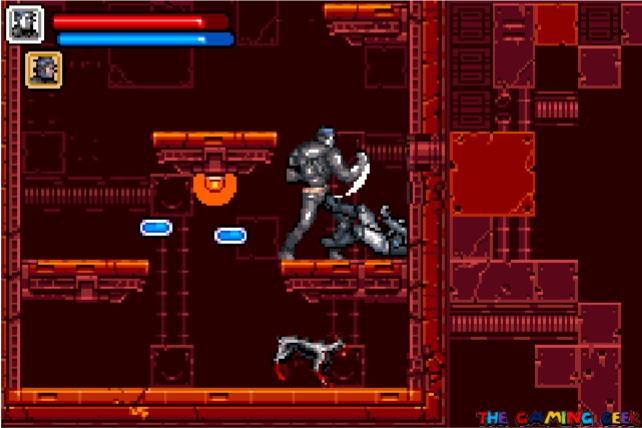 Expect to fight a lot of these soldiers.

Thankfully, this game features several good boss fights with known X-Men villains. And they used the film versions too. Popular villains like Sabretooth and Juggernaut are here, as well as Pyro. Iceman’s ice shard attack is a little cheesy and made some of these fights really easy though. But it’s really fun switching to the different playable X-Men and using their different abilities during these boss fights. 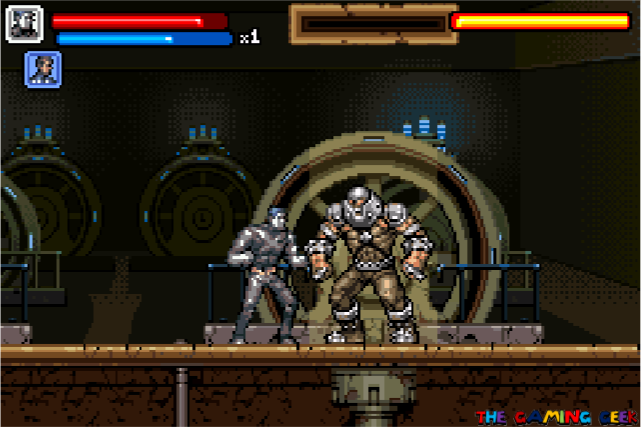 My only complaint about the bosses involves a quick but frustrating section with the Multiple Man. The stage is auto-scrolling and you have to keep running to the right. But Multiple Man will keep generating clones to slow you down. You can either lose X-Men members here or be forced to restart the entire section completely. If you survive this, you’ll have to face Multiple Man in a straight up battle. I can imagine a lot of people getting stuck for a while here. 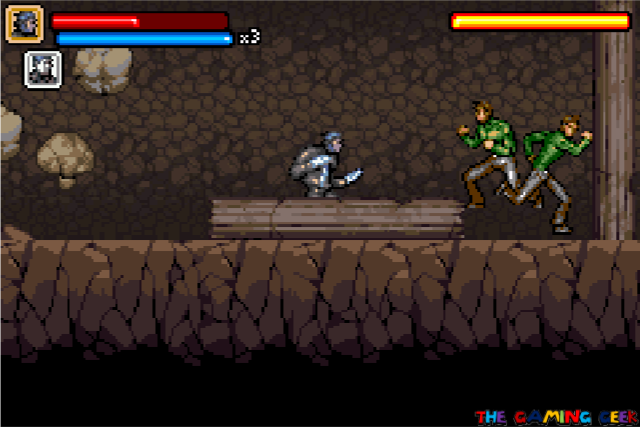 This is the most annoying part of the game.

I’ve got a few more things to note about the bosses. X-23 makes an appearance here, which is non-canon if we consider the events of Logan. Magneto’s Brotherhood of Mutants are in the game chasing after William Stryker, but they just disappear from the game’s storyline. And the final boss was quite challenging and made sense based on the context of this game’s plot.

I loved the graphics of X-Men: The Official Game. All the character sprites are quite detailed. The known characters are very recognizable, and you can see how their designs are influenced by the X-Men films. Despite the game taking place in just one large facility, I was impressed with how different the stages are to each other visually. You’ll spend time in what looks like laboratories, office spaces, and sewer systems in this game. And these stages are large! On more than one occasion, I felt that the stages were large enough to allow for multiple paths to the end. 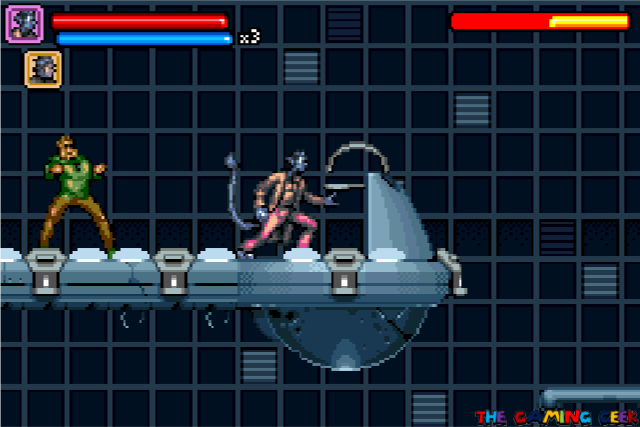 Do you recognize this location from X2: X-Men United?

As for sound, I did enjoy what this game had to offer. It’s main themes that played during the cutscenes fit well with the themes and soundtrack of the film franchise. The stage music was okay, but I’m having trouble recalling them so I guess they’re not very memorable. They’re not bad though, which is a good thing. 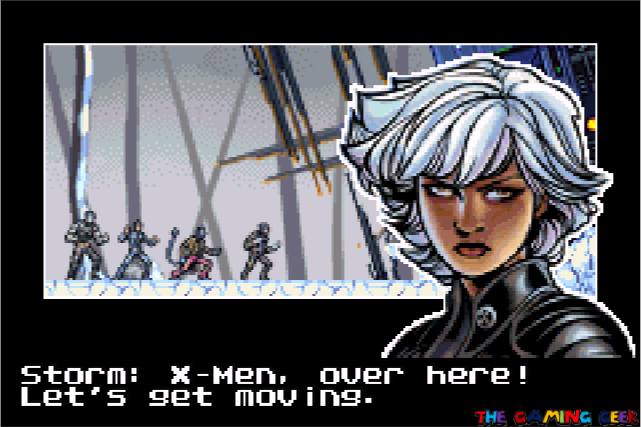 Not Halle Berry’s likeness, but not bad at all either.

Speaking of cutscenes, I was surprised to see what looks like Chris Bachalo’s art in them. These static cutscenes offer detailed dialogue that is really able to convey the plot of the game really well. Characterization was also on point, even if the story itself was very basic. But man, Bachalo’s art really makes these cutscenes stand out. They’re all headshots, but each character has multiple illustrations that match the emotion that the script is conveying.

People look at licensed games like they’re soulless cash-grabs that aren’t very good to play. But that’s definitely not what X-Men: The Official Game is. The game has some issues, like the frustrating Multiple Man chase sequence, but it’s a solid game with a good hook: you can play as four different X-Men and utilize their powers based on what the situation needs. Most of the stages are vast and the boss battles are good representations of the characters that you’re fighting. And the story of the game fits the movies well (except for X-23’s appearance).

X-Men: The Official Game is an enjoyable X-Men game and based on what I’ve had the chance to play, is probably the best X-Men game available on Nintendo’s handheld devices. This game is definitely worth a look if you’re an X-Men or a Marvel fan.