Most classic superhero games feature Spider-Man, Batman, or the X-Men, so I was really looking forward to playing The Invincible Iron Man. I mean, it’s Iron Man. The character wasn’t as popular back then when this was released, so it’s really interesting to see what the developers thought of the character when they made this game. 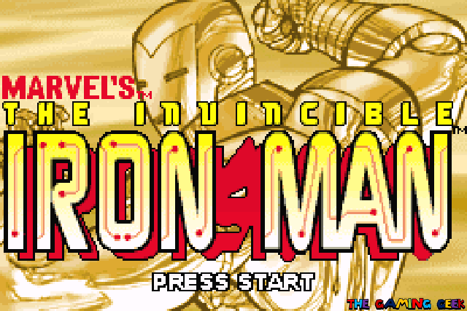 Title screen for The Invincible Iron Man for the Game Boy Advance.

So let me share my thoughts and experience about this game!

The Invincible Iron Man is, to my surprise, a run and gun game. It was developed Torus Games and published by Activision. In the game, you take on the role of Tony Stark. After alarms went off in the Stark Enterprises building, he discovers that his current suit has been stolen. Well, this is Tony Stark we’re talking about, so he actually has older suits laying around. He gets one and goes after the culprit.

Stark needs to invest in a better security system.

In this game, you’ve got a health meter and you start the game with three lives. You lose one of your lives when your health meter is completely depleted. You’ve also got an energy meter which I’ll discuss further later. There are plenty of power ups that will restore your health and energy a small amount in this game’s stages, and you can occasionally find extra lives too, in the form of Iron Man’s head. 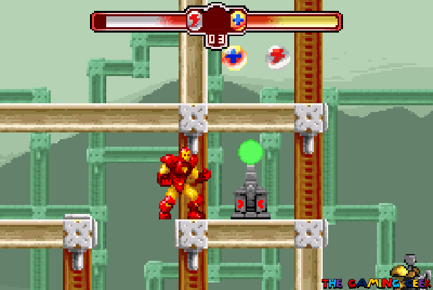 Health is indicated by the gold circle with blue cross. Energy is silver with red lightning. In front of Iron Man is a mid-stage checkpoint.

Whenever you lose a life, you have to start the stage from the beginning. But if you manage to find a checkpoint, you’ll start from there instead. The game does have a save system and you can have up to three different save files. I suggest that you just exit the game and reload a save if you’re near death – you’re starting over any way so why lose a life?

There are a total of eight images to unlock in this game’s Bonus Gallery.

The game doesn’t have any difficulty settings. It does have a Bonus Gallery where you can unlock some art and flavor text if you manage to find comic book power ups hidden throughout the stages. And when you beat the game, you’ll be able to unlock Level Select from the main menu.

The suit that Stark uses in The Invincible Iron Man is probably several versions old already. It still has repulsor blasts, and you can actually fire a barrage of these quite easily. But each blast drains the energy meter. When it is completely depleted, you’ll only be able to fire these off one at a time. The energy meter does recharge but not fast enough for you to be able to deal with more than one enemy, so you need to watch that energy meter. 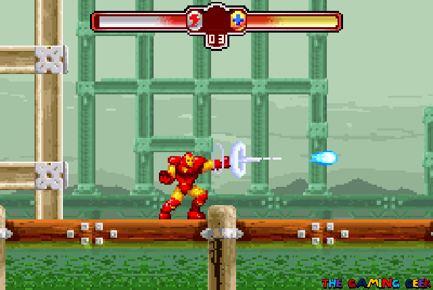 Quickly tapping the attack button will let you fire off several repulsor blasts.

You can hold down the attack button to charge your repulsors. As far as I can tell, there are two levels of strength you can charge up to. This happens fast so it’s easy to get to a full charge. Of course, this depletes the energy meter by a lot. It’s a good gamble though, because it can take out several enemies at once. 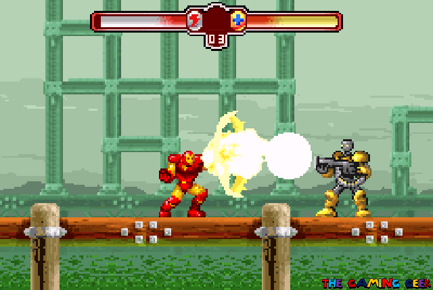 Using fully charged repulsor blasts can take out enemies in one shot.

If you find a blue orb, you can unleash a powerful chest blast. If you get a second orb, you can release an EMP pulse that kills all enemies on screen. 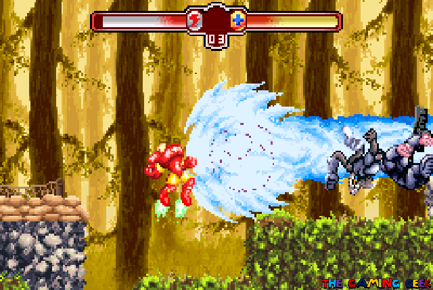 I’m not sure if they were using the term “arc reactor blast” when this game was released, but that’s what this is.

Iron Man has a melee move in the form of a shoulder charge. This only pushes most enemies back and only takes out small enemies. It can, however, break through some walls and barriers. 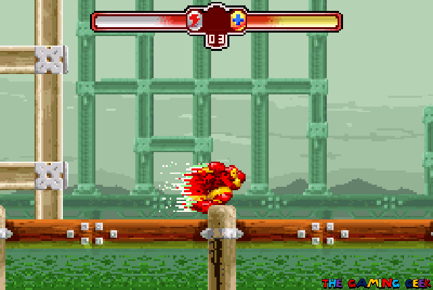 The shoulder charge is used mostly for breaking barriers and pushing enemies back.

He doesn’t get any other melee moves, so this game truly feels like a run and gun game.

The Invincible Iron man features vast stages, with paths that often separate out into two or more branches. So far, there aren’t any long paths that lead to dead ends, so you don’t have to worry about backtracking too far. These stages offer a lot of verticality too. Often, you’ll need to reach high platforms. Unfortunately, Iron Man can’t fly in this game. He can get a boost from his jet boots, which functions as a double jump. 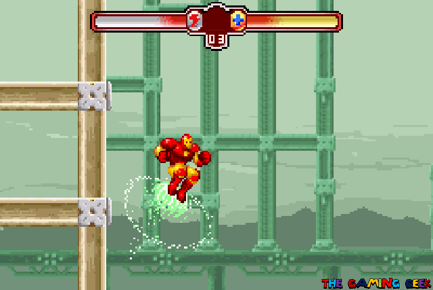 The developers didn’t give Iron Man flight for game balance, so all you get is a jump boost from his jet boots.

There are a lot of power ups, usually extra lives or the gallery bonuses, hidden in hard to reach areas. Combining Iron Man’s shoulder charge and jet boots will allow you to reach them. There’s a move that I learned that you’ll probably need if you want to get all the bonuses. On the ground, do a shoulder charge then jump. You can do another shoulder charge in the air, and then finish it off with a jump boost.

These stages all look good, but even if you move to different parts of the stage, everything still looks the same. So it doesn’t feel like you’re actually going to a different location. And the locations of this game also feel out of place. If you think of locations for an Iron Man game, do you think of the docks (which looks more like a construction site), a forest, or snow capped mountains? This is a minor complaint though, and didn’t have a huge impact on my experience.

Armor Isn’t the Only Thing Missing

The Invincible Iron Man plays really well. It’s fun to explore the large stages. The run and gun combat is quite satisfying. And the controls are quick and precise. But this game is like a really good meal that needed a bigger serving size. I’ve already talked about Iron Man’s moveset. If you think about it, you can get a lot more moves in an 8-bit game like Mega Man. 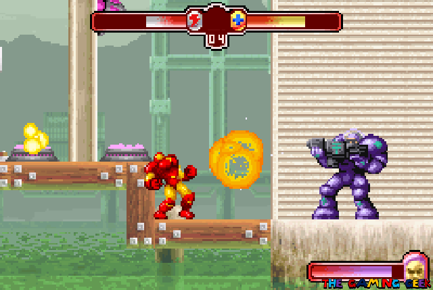 The comic book version of Morgan Stark is a boss in this game.

I understand not giving Iron Man flight, but his arsenal in this game is really lacking. It would have been great if you could also get upgrades as you progressed in the game. Maybe a feature that will allow you to swap your repulsor blasts for other types of ranged weapons. Homing missiles, different elemental beams, anything.

There are eight stages in the game, with each location represented by two stages. So you only go through the docks, a forest, a snow capped mountain, and the enemy’s secret base. This game needed another pair of stages at least. 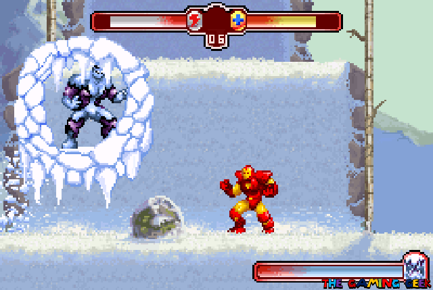 Blizzard is a well-designed boss. But you need to fight him twice.

What I was really disappointed in are the game’s boss fights. This would have been a good opportunity to use characters that wouldn’t have been featured in an Avengers game. And Iron Man has a decent rogues gallery. But we only see Morgan Stark in a generic suit of armor, Blizzard, and Crimson Dynamo as bosses. And you have to fight Blizzard twice. 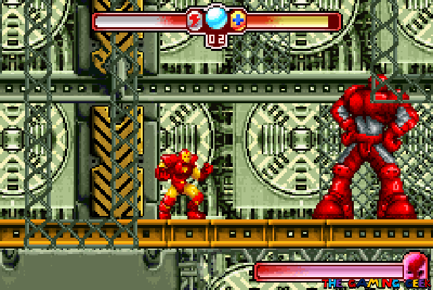 The Crimson Dynamo is this game’s final boss. Yes, I spoiled it – so that you won’t expect the Mandarin.

Where’s Ghost? The Living Laser? Titanium Man? And what the heck, the Mandarin? The battles with Blizzard and Crimson Dynamo were really good experiences. Another pair of stages would have been an opportunity to include another one of Iron Man’s enemies.

The Invincible Iron Man has really good graphics. Colors pop, and stages and backgrounds are very detailed. Iron Man looks great, if a bit short and stocky. But he’s animated well, and his various moves that use energy have these little effects that make them look amazing. One example is that little ring that comes out every time he shoots a repulsor blast. I just wish the stages had more variety. I would have loved to see what the developers would do with other locations. 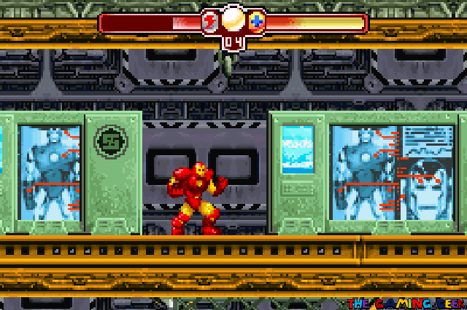 The game’s last area has these computers analyzing Stark’s armor in the background.

The sounds of this game are really good too. I’m happy that the developers didn’t reuse stage music too often. And each stage did have appropriately sounding music. Sound effects are also excellent, so it makes shooting your blasts quite satisfying.

Some cutscenes used good art, and others are just headshots floating in a black background.

And I liked the game’s presentation for the most part. Comic book art is used often in the game’s cutscenes. I did wish they were more consistent with it, as there are some panels with just text. Some panels are just a character’s headshot and word balloon. And they could have used a better font in the cutscenes. Using a thick black outline and white fill made the text harder to read.

If it looks like I have more complaints than praises, but that’s only because The Invincible Iron Man could have been a lot better. But as it is, it’s a great game with a good foundation. Playing it was a good experience. A short experience, but a good one.

The game has great controls and a decent moveset that equips you to deal with the game’s challenge. All the stages were fun to explore, and the bonus unlockables do give a reason to replay these stages. The boss battles are good, even if there are just two of them. And even if this game came out almost two decades ago, it still looks and sounds very good. If you like superhero games, you should check The Invincible Iron Man out.