Despite being a comic book fan for quite a number of years, I’ve never really had good exposure to the Teen Titans. Most of what I know about them comes from my stint with the defunct collectible card game called VS System where they were a popular faction. By the time they had their Cartoon Network series, I was no longer interested in watching animated TV shows. But they’re superheroes, so I was going to play the pair of Titans games on the Game Boy Advance games, anyway. Going into this game, I was quite curious because this is a popular request on the retro emulation scene. 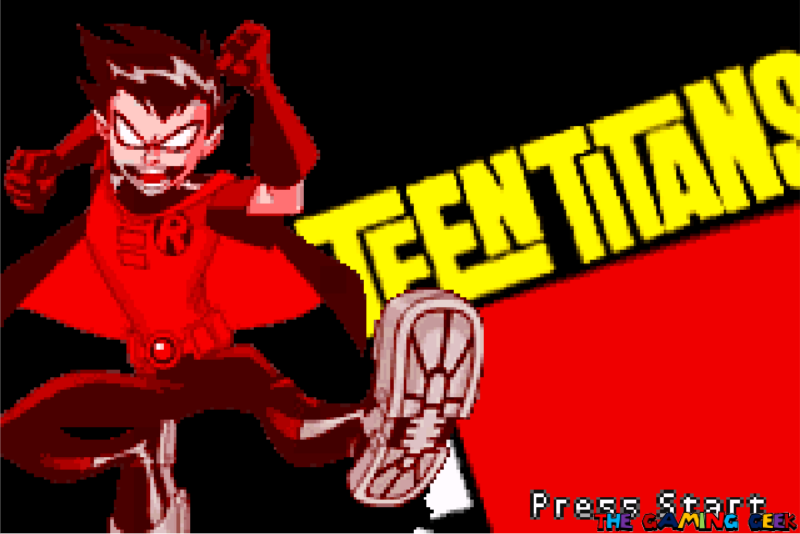 Title screen for Teen Titans for the Game Boy Advance.

Teen Titans is an action platformer that was developed by Artificial Mind and Movement and published by Majesco Entertainment. This game is based on the Cartoon Network animated series. It looks like this game takes place during/after the series third season but before the fifth. You can play as any of the core members of the cartoon version of the team: Robin, Cyborg, Beast Boy, Starfire, and Raven. Each hero has his/her set of abilities, which you’ll need to utilize in order to progress through the levels. 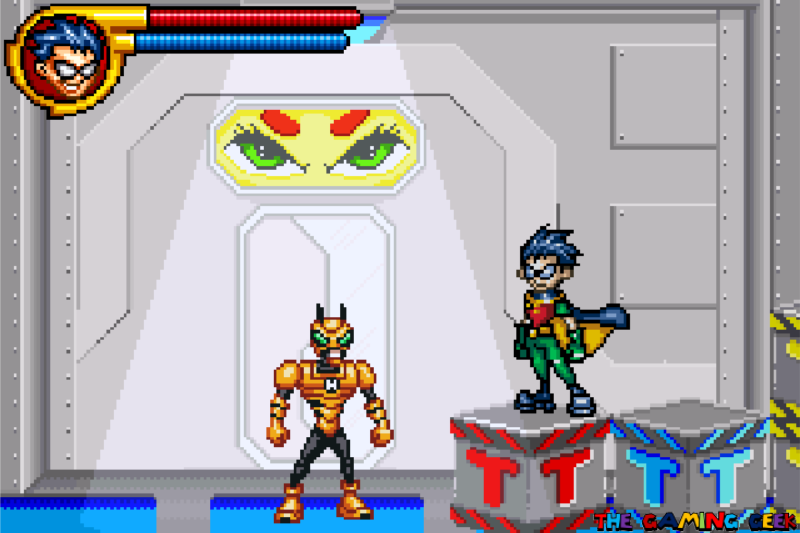 Robin leads the way for the Teen Titans.

In the game, you can swap between the different Titans members on the fly. Each one has his/her own health (red) and energy (blue) meter. When a hero’s health is completely depleted, he/she is knocked out and is immediately replaced by another. You won’t be able to switch to a knocked out hero but if you’re down to your last one, one or two of your knocked out heroes get revived. It’s weird, but I was actually trying to kill off all of my heroes to see if there’s a count of lives or if I’m going to get a Game Over screen, but someone kept getting revived. Inactive heroes slowly recharge their health and energy, so it’s best to swap them around every once in a while even if there’s no need to, just to keep everyone topped up.

The game has a save system with two save slots. When you beat the game, you can replay any of the six missions. Upon beating the game, you also unlock difficulty options so you can choose an easier or harder difficulty for your replays. The game has some unlockable content and you’ll need multiple playthroughs to unlock them all.

The Teen Titans have similar basic moves, with a few differences. The D-Pad controls their movement, and none of them have the ability to crouch. A is for jumping. Tapping A twice results in a double jump for Robin and Cyborg, and it activates flight mode for Beast Boy, Raven, and Starfire. B is for attacking, and tapping B will make all of them do a three hit combo. As their third attack, Cyborg, Raven, and Starfire fire off a projectile. The two ladies can also shoot projectiles while flying. Beast Boy, unfortunately, cannot attack while in flight. 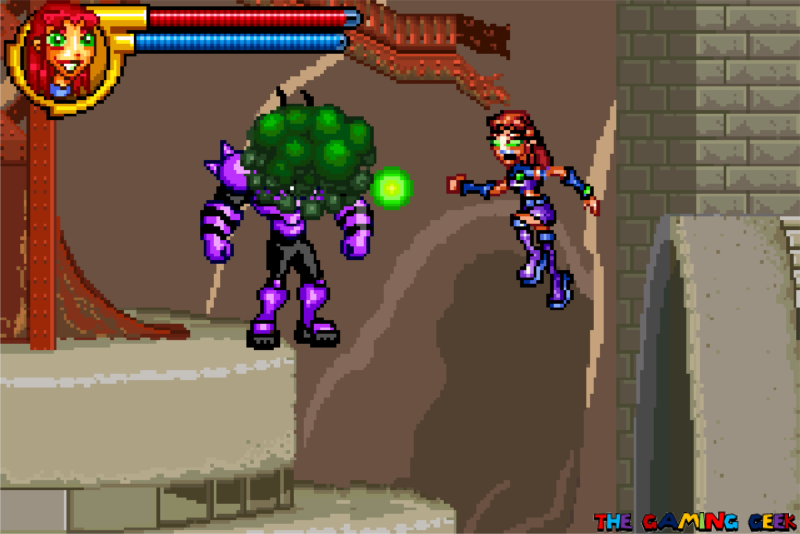 Starfire can shoot energy blasts as regular attacks while airborne.

Pressing the R button will make your character pull off a powerful move that uses up energy. Each hero has a different R move on the ground and in the air. On the ground, Cyborg and Starfire will fire off beams of energy, Beast Boy will turn into a rhino and charge at enemies, and Raven will pull up a force field. For these four, they will continue to do their move as long as you’re holding down R and still have energy. Robin does a multiple hit attack that lasts a couple of seconds. 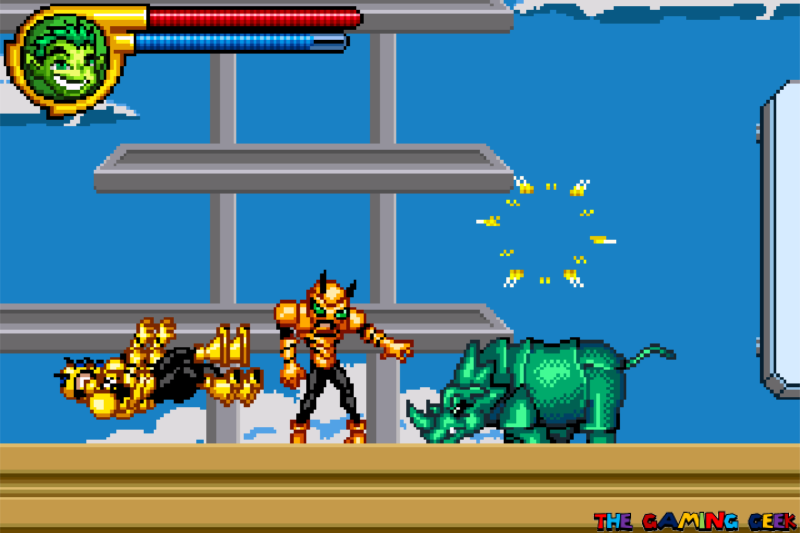 In the air, each Titans member also has a different R button attack. Starfire, Cyborg, and Robin throw out a barrage of projectiles in front of them. Beast Boy turns into a tiger and pounces on enemies in front of him. Raven has what is probably the most devastating aerial R attack: she brings down rubble across a wide area. 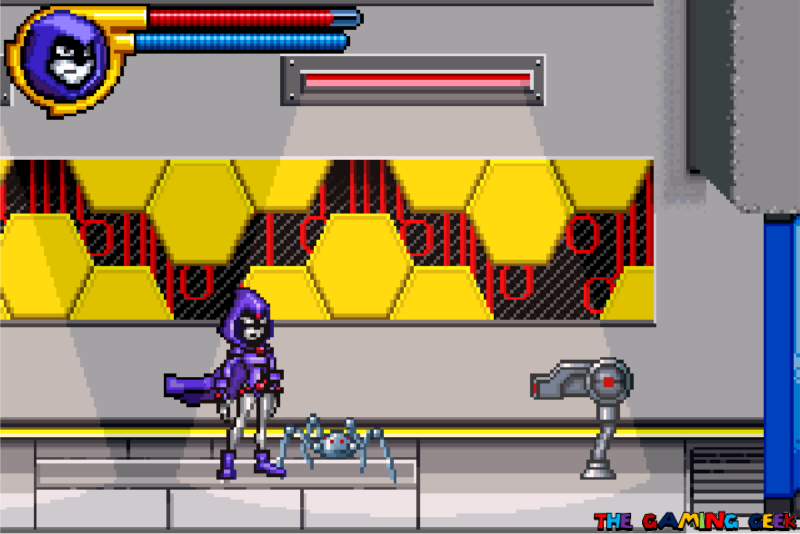 You’ll face a lot of these spider bots and laser turrets.

I didn’t realize this at first but colors actually play a big part in Teen Titans. When you pull up the hero swap HUD, you’ll see that each character portrait has a specific color: orange (Starfire), blue (Cyborg), purple (Raven), red (Robin), and green (Beast Boy). As you progress in the game, you’ll face three different types of H.I.V.E. agents: regular agents, gunner agents, and giant agents. They’re all colored yellow at first, but you’ll see other color variants as well. 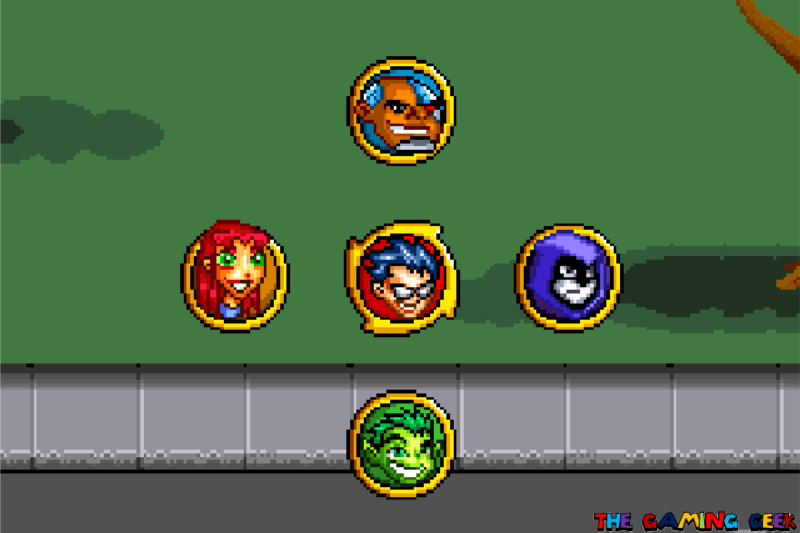 At first, I thought these were just palette swaps. However, the color of the H.I.V.E. agents actually represent which Titan member is their weakness. You don’t really need to swap to Starfire if you’re fighting against orange H.I.V.E. agents, but she’ll defeat them faster than the other Titans.

Cyborg is a better choice against these enemies.

Later on, you’ll start facing against clones of the Titans. At first I thought that specific Titans members would be better match ups, but they’re all just following the color weaknesses too. To be honest, I don’t know how to feel about the implementation of this mechanic. I appreciate that you didn’t need to follow this mechanic to beat the game, but following it didn’t seem to impact the gameplay experience significantly, either.

Aside from the color of your enemies, the level design of Teen Titans will also require you to switch between them. You’ll occasionally encounter barriers that are specially designed for a specific member. Robin has the ability to hack into computer terminals and unlock gates. 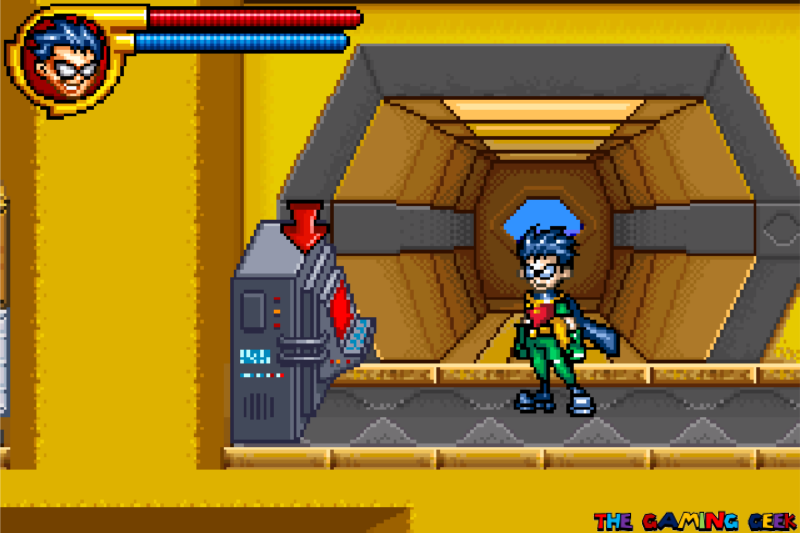 The computer screen and the arrow pointing to it is red (Robin’s color).

Cyborg has a ground pound move that can destroy thin floors, creating new paths for the heroes. 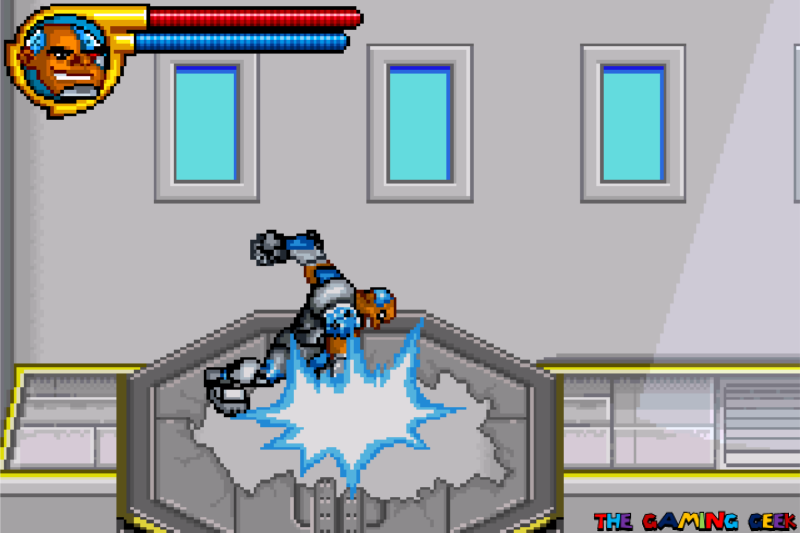 Floors that you can destroy usually have blue arrows pointing at them (Cyborg’s color).

When Beast Boy activates flight mode, he turns into a bird. This allows him to fit into small openings that Starfire nor Raven can’t get into, even if they can also fly. 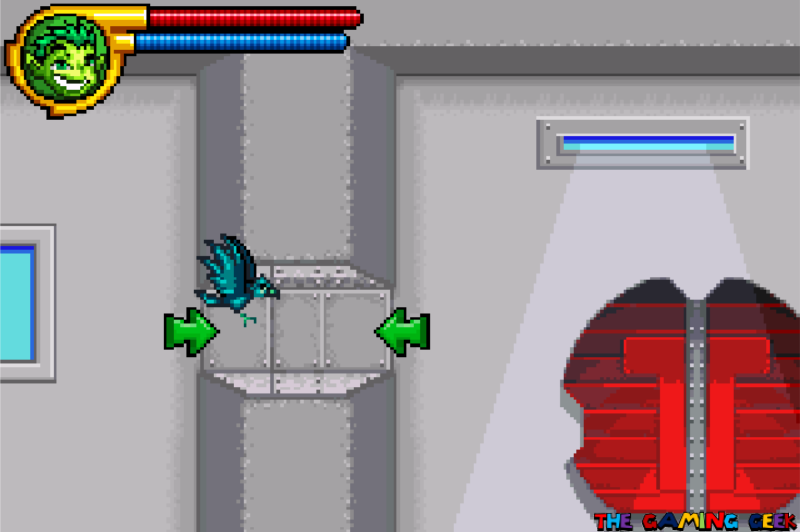 These arrows are green (Beast Boy’s color). It’s getting obvious now, isn’t it?

Occasionally, you’ll encounter beam devices that block your path. Raven’s force field is perfect for these. 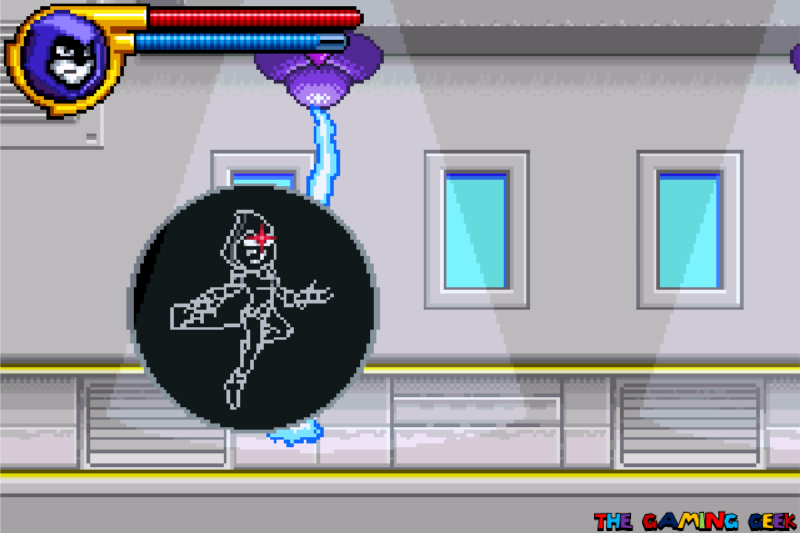 These laser barriers have purple arrows pointing at them (currently blocked by the health and energy meter).

And finally, you’ll encounter switches that Starfire will need to blast, which will also unlock doors. 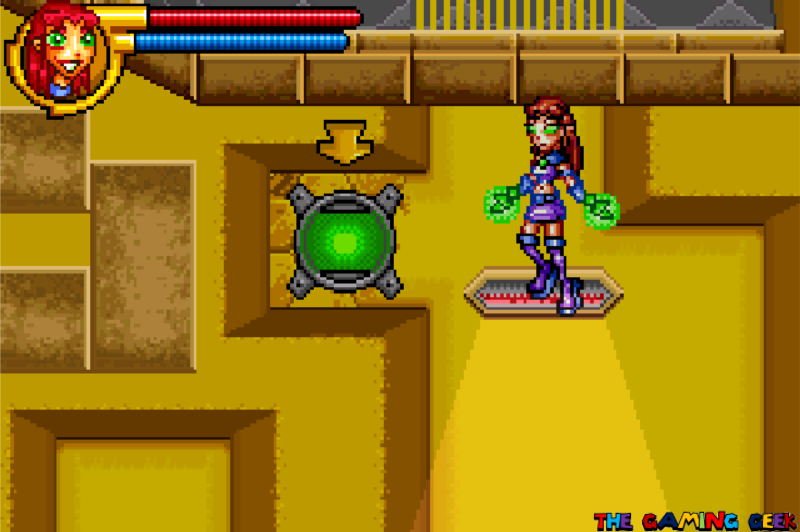 After the first mission/level, it really became clear to me that this game was made for a much younger audience. And it’s quite obvious if you look at how color is used as a gameplay mechanic. I just wish that there was more variety in the obstacles that the developers implemented, because this got old for me real fast.

Despite being very easy and simple, it took me a while to beat this game because I tried to collect these Titans cards hidden in the game’s stages. Each of the six stages have 25 of these cards, and I had trouble finding some of them. 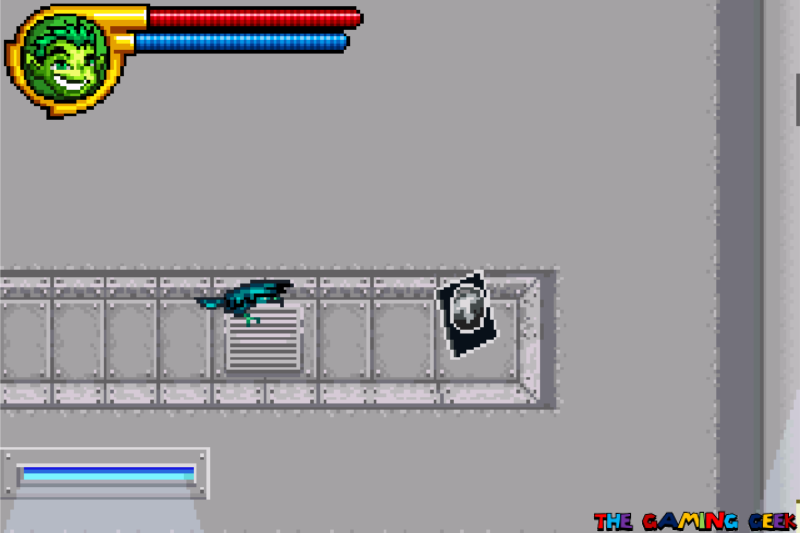 Some of these cards were quite hard to find.

I thought that finding all of these cards would unlock all of the images in the game’s special library, so I did go out of my way to find them. It was obvious padding, and there were times when I ended up backtracking from the end of the level all the way to the beginning. But the mechanic did force me to really explore every inch of each level. 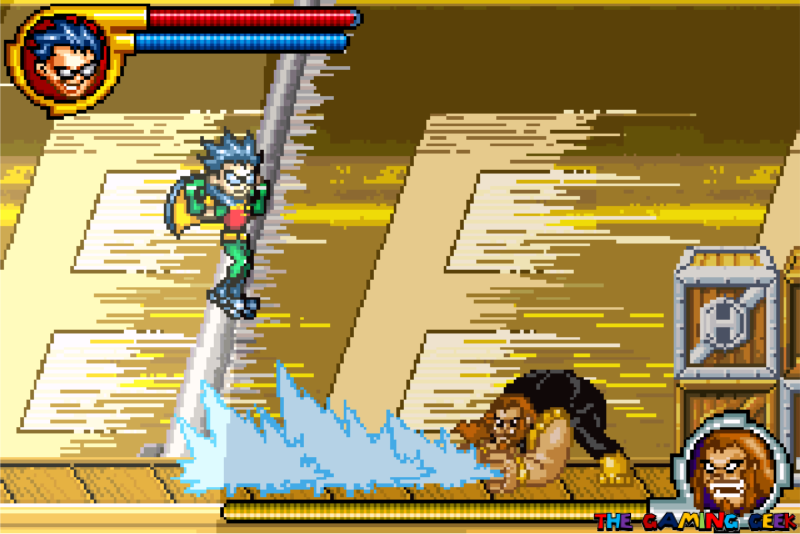 The battle with Mammoth was my favorite.

I also enjoyed this game’s boss battles. I wasn’t familiar with the villains, but I like how the boss battles were designed to work in a large space. For the first few ones, you’d need to keep chasing after the bosses as they keep moving around. My favorite battle was with Mammoth, as you needed to figure out which Titan abilities would work against him.

Teen Titans was quite a visual treat. I’m really glad that the developers went for the animated look instead of forcing “3D-ish” assets. This art style is definitely in line with the animated series, and this game holds up in terms of graphics because of it. I love the detail in each of the sprites. Everything is well-animated. And there is a good variety of stage locations too. Although the stages do feel a little bland and empty. 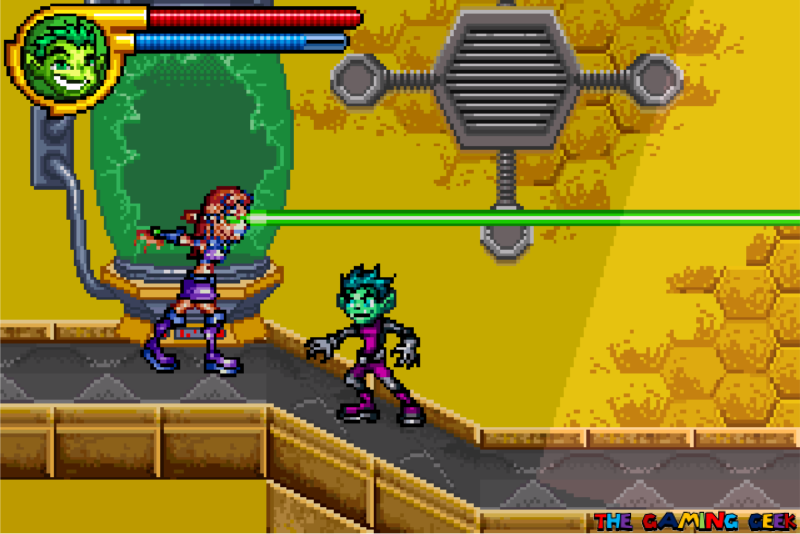 Beast Boy takes on a Starfire clone with no color weakness.

In terms of sound, Teen Titans has some decent tracks. I especially like the title track, which is a remake of the animated series theme but done with a classic rock guitar. Occasionally, you’ll hear some voice clips from the characters too. 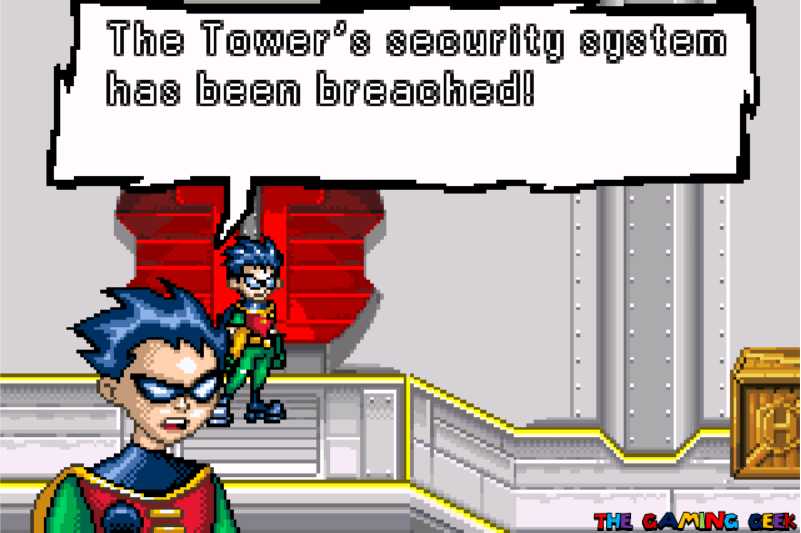 The game uses headshots and text dialogue for its cutscenes.

And this game is quite polished too. Several menus make use of the Titans font, and stages usually have Titans or H.I.V.E. iconography. Cutscenes comprise of headshots of the different characters, along with some easy-to-read text dialogue.

The only problem that I have with the first Teen Titans on Game Boy Advance is that it wasn’t made for me. And that’s not a bad thing. The game simply didn’t have the depth or complexity that I want from video games. But that doesn’t mean that this is a bad game. I actually like the quick swap mechanic, and how each Teen Titan member has an ability that deals with specific barriers.

It’s actually a great game for someone younger. I think this is a good game for learning video game concept. However, I wish that the developers added more variety in terms of the types of enemies and obstacles. That way, this would have been great for both kids and older gamers. If you’re a Teen Titans or DC superheroes fan, go ahead and check this out.