When I first read about a game like Superman Returns: Fortress of Solitude, I didn’t know what to think of it. When I see or hear the name Superman, puzzles aren’t the first things that come to mind. And yet here we have a puzzle game that’s also a tie-in to the failed attempt to revive the Superman franchise. 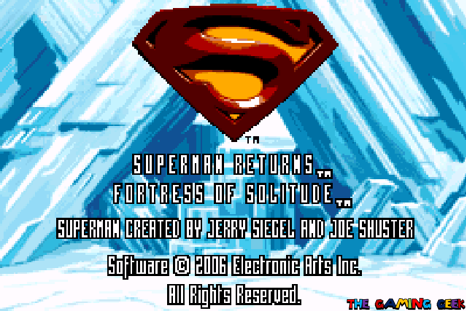 Title screen for Superman Returns: Fortress of Solitude for the Game Boy Advance.

I almost skipped this, to be honest. But then I thought that there wouldn’t be another chance to play a puzzle game that’s also a superhero game. So I went ahead and did one playthrough of Superman Returns: Fortress of Solitude anyway. Let’s talk about my experience with it. 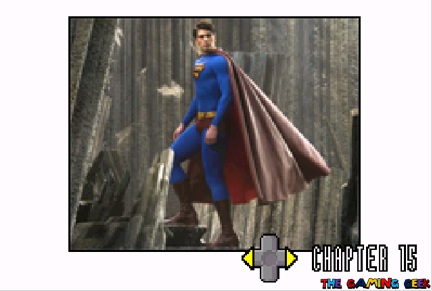 One of Superman’s “memories”.

To do this, you’ll take on Superman’s role and you’ll tackle different puzzles offered by the Fortress in order to jog your memory. These puzzles are grouped together by “chapter”, and there are a total of twenty chapters all in all. Each chapter can contain subgroups of puzzles, represented by tubes. A tube can consist of one puzzle, or a bunch of puzzles. 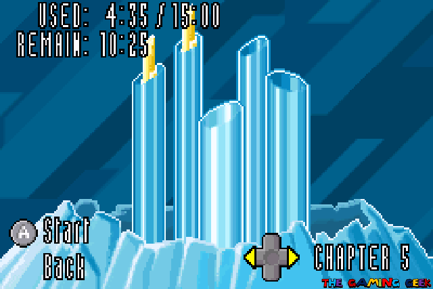 Chapter 5 consists of five tubes. You only have fifteen minutes to complete all of its puzzles.

The most number of puzzles grouped in a single tube is thirteen, if I’m not mistaken. You need to solve all of the puzzles in a tube in order to save your progress. When you do solve all the puzzles of a tube, you get to insert a crystal inside it, marking it as complete. Each chapter has a set amount of time allocated to it, and you’ll need to solve all of that chapter’s puzzles within that time limit. If you spend too much time on any tube, you can go back to it and try to solve it’s puzzles faster.

The game has one save slot, and there is a training mode where you can practice on sample puzzles. It also tracks fastest times, so multiple people can play this game and try to beat each other’s best times. It only saves three initials though.

Superman Returns: Fortress of Solitude offers two different kinds of puzzle types. The first type are called Kryptonex puzzles, which are essentially Sudoku puzzles. Traditional Sudoku puzzles involve placing numbers in a grid. A number cannot be placed repeatedly in any single row, column, or region. In this game, you place crystals of different shapes and colors instead of numbers. Also, these Kryptonex puzzles come in four by four, six by six, and nine by nine grids. 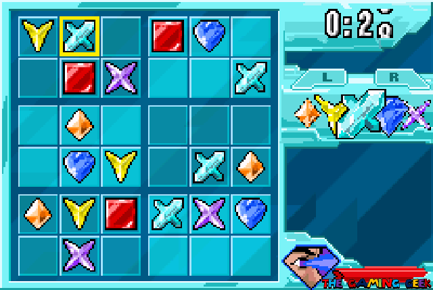 A sample Kryptonex puzzle in a six by six grid.

The L and R buttons cycle through your crystals. Once you’ve exhausted a crystal, it is removed from your selections. Once you start, a timer starts counting up. Technically, this isn’t a time limit, but how long you spend on a puzzle will be subtracted from your allotted time for that chapter. If you place a crystal in the wrong square, you’ll get 30 seconds added to your time. 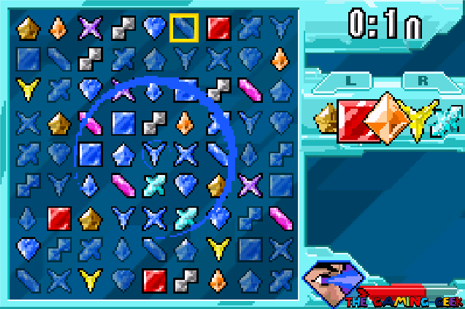 Thankfully, you can use Superman’s powers to help you. Pressing Select will cycle through his powers, which you’ll see at the bottom right of the screen. Depending on which power you use, his red power meter will be depleted. Super speed stops the timer for a short while. Heat vision lets you choose a square and automatically place the correct crystal inside it. The best power to use with this puzzle type is the X-Ray vision. This will reveal the entire puzzle to you for a short while. This drains a lot out of the power meter so you can’t use this for more than three times.

The second puzzle type in Superman Returns: Fortresss of Solitude is called Crystallization. In these puzzles, you are working with five by five, seven by seven, or nine by nine grids. The objective in these puzzles is to light up all the squares in the grid. Whenever you fill a straight row or column with crystals, all the squares in that row or column will light up. However, you can only place a crystal on a square that’s adjacent to another crystal of the same shape or color.

Each Crystallization puzzle starts you off with a wildcard crystal in the middle of the grid. You then have a selection of three Crystals. Once you take one of these Crystals, it is replaced with another. It might sound easy but if you’re not careful, you could end up with Crystals that you can’t place on the grid. 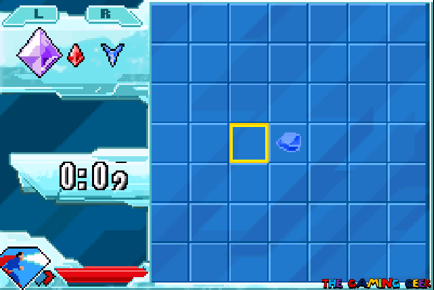 How the start of a Crystallization puzzle looks like.

Similar with Kryptonex puzzles, a timer starts to count up when you’re doing a Crystallization puzzle. Mistakes will result in the addition of 30 seconds to your current time. You can also use some of Superman’s powers with these puzzles. Super speed also stops the timer for a few seconds. Freeze breath will allow you to light up any square of your choice. And the most useful power here is the Heat Vision, which will replace all of your three Crystals with new ones.

Superman Returns: Fortress of Solitude isn’t limited to puzzles. This game also has some, ahem, action sequences. The game refers to these sequences as Epic Battles, but I think the developers should look up the definition of the word epic in the dictionary. Occasionally, one of Superman’s villains (either Metallo, Mongul, Parasite, or Mister Mxyzpltk) will try to bother you.

Well, their henchmen will. Regardless of shape, they all move and behave the same way. You’ll need to fight them off while flying in side-scrolling shooting levels. In these sequences, you’ve got your Freeze Breath and Heat Vision. 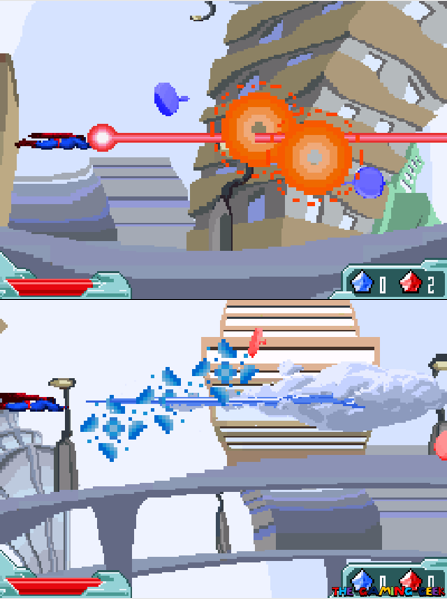 Superman can go hot or cold in these Epic Battles.

You need to look at the enemies to see which attack will work on them. Red enemies are weak to the Freeze Breath, and blue enemies are weak to Heat Vision. When you take out a group of these enemies, they’ll leave behind a Crystal of the same color. If you don’t pick these Crystals up right away, they’ll change to the opposite color. 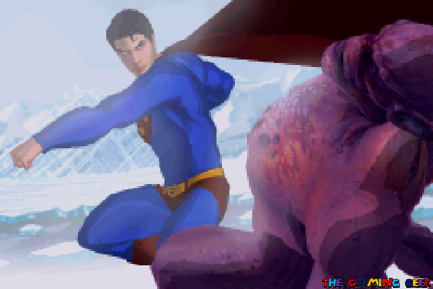 These are just still images – you won’t actually get to fight Superman’s villains.

If you manage to get the required number of Crystals, you’ll get treated to still images with Superman winning. If you lose, you’ll see images of him losing. These sequences are quite easy and very short, so I don’t expect anyone having too much trouble with them. I’m not sure if these Epic battles have any effect on the outcome of the game, since they don’t count as cylinders in the game’s chapters.

Once you’ve solved all the puzzles in all of the chapters of Superman Returns: Fortress of Solitude and revealed all of Superman’s memories, you’ll need to overcome one final challenge. And I’ll admit, I wasn’t able to solve this one. Not because it’s hard, I just don’t want to put the effort in. Well, let’s have Jor-El explain this himself. 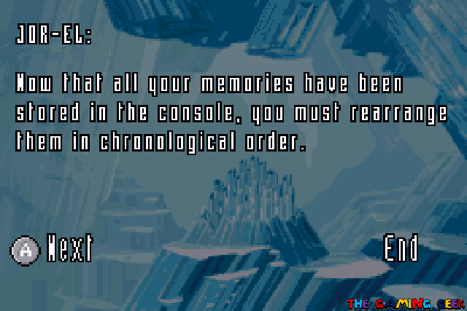 Jor-El’s final challenge for us.

In case the images don’t load, Jor-El is telling us to arrange the memories that we’ve unlocked in chronological order. And Jor-El, why would we want to do that? 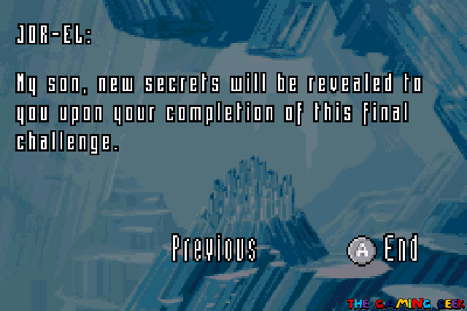 Are these “new secrets” going to make the effort worthwhile?

If we arrange these memories in the correct order, “new secrets” will be unlocked. This sounds easy, but Superman Returns came out in 2006. I don’t remember much of what happened in that film. And I’m not interested in watching it again. I tried referring to several different detailed summaries of the movie but those weren’t enough. There aren’t any walkthroughs or guides available online for this game.

And I’ve watched four people upload gameplay footage of them trying to solve this part, only for nothing to happen. One of them was even skimming through the movie while playing this game. And even though he was convinced that he had the right order, nothing happened. If you do decide to try this game, you can stake claim to solving this final challenge if you succeed. I didn’t, and even though I’m tempted to try, the temptation isn’t strong enough to make me want to sit through the movie.

As a puzzle game, Superman Returns: Fortress of Solitude is okay, but somewhat lacking. Both puzzle types were quite fun, and I think this game made me better at solving Sudoku puzzles. Switching from numbers to colored crystals definitely made it easier for me to spot patterns. I wish there was a third puzzle type, instead of those side scrolling shooter levels that really feel out of place.

But seriously, when you pick up a video game with the name Superman on the box, are you expecting a puzzle game? I empathize with the kid who received this as a gift from well-meaning parents or grandparents. Imagine being in the shoes of that kid, watching the movie, opening your presents, loading this game, and then finding out that there’s very little action in it.

Fans of Sudoku puzzles may find some enjoyment with this title. At this point though, there might be a ton of better options for them. I don’t think even hardcore Superman fans are going to have fun with this game. Unless they like puzzles too. I like puzzles, but I really had to drag myself in getting to this game’s finish line simply because puzzles aren’t what I expect from a Superman game.