I was surprised at how many Spider-Man games were released on the Game Boy Advance at first, but when I saw that half of them were film tie-ins, I understood why. Sony’s Spider-Man films were really popular, and they came out during the lifetime of the Game Boy Advance. Game publishers may have been hesitant to back the development of games based on comic book characters, but not when it comes to movies. 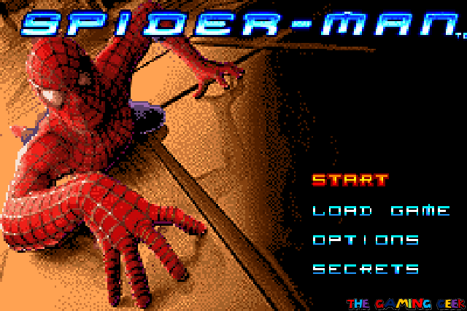 Main menu screen for Spider-Man on the Game Boy Advance.

In any case, let’s talk about the first of these tie-ins: Spider-Man.

The Game Boy Advance version of Spider-Man is an action platformer developed by Digital Eclipse and published by Activision. It was developed as a tie-in to the 2002 film of the same name, so the game is set in the same universe. It tells a slightly different story though.

The game starts with Peter Parker already operating as the titular hero and skips everything related to the origin. Also, the Norman Osborn of this game is in league with other supervillains. Most of the game’s story and stages involve Peter Parker’s pursuit of these supervillains. Even if you know the movie by heart and have every line and scene memorized, this game will bring some new details to the table. The Green Goblin loves leaving explosives all over the city.

Most stages in this game comprise a single large area that you can explore. Sometimes, you’ll just need to make your way to the end of a stage to proceed to the next one. Other stages have special objectives, like giving you a number of hostages to rescue or a number of bombs to retrieve. All of the stages have time limits, so you can’t take your time to explore every nook and cranny. 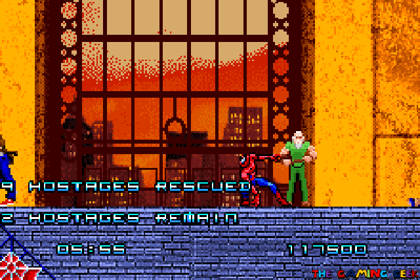 Osborn’s minions are also quite fond of keeping hostages.

You’ve got a health meter in a form of a web at the lower left corner, and you start the game with three lives. Stages have plenty of health refills and extra lives – I had more than thirty lives by the end of my first playthrough. The game also has a save system with three save slots. There are no difficulty options, but there is a Secrets option with a few features that can change up the gameplay, which we’ll talk about more later.

Spider-Man has the usual moves that you can expect in platformers. He can walk left and right using the D-Pad, and he can crouch too. He can crawl up surfaces and here, he wraps around corners easily. You’ll need this to explore the game’s vast stages. 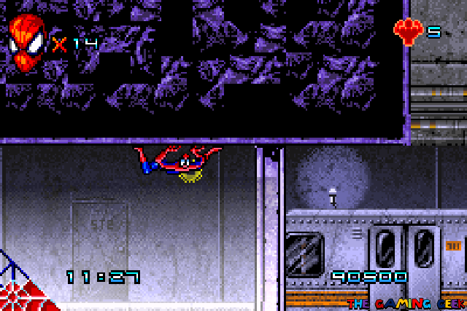 That subway train is a one hit kill stage hazard.

Spidey also has his web-slinging ability in the game. He can fire off a web-line in the middle of a jump, and you can do this continuously. However, don’t do this when you’re too close to a stage hazard (like a pit) as it doesn’t work as well as in other games. I’ve lost a couple of lives because I missed a web-line. 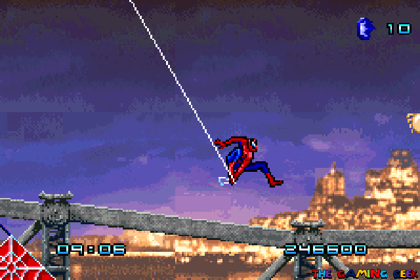 You can’t run out of webbing in this game.

The second method is to press the R button. Spidey can shoot a web-line even while standing, and when this hits a stationary object, it will pull him towards it. You can aim this upwards, to the left or right, and even diagonally. This method will help you reach areas that are otherwise out of reach, and can help get you out of trouble quickly too. Thankfully, you have unlimited webbing in this game, so use your webs as much as you want. 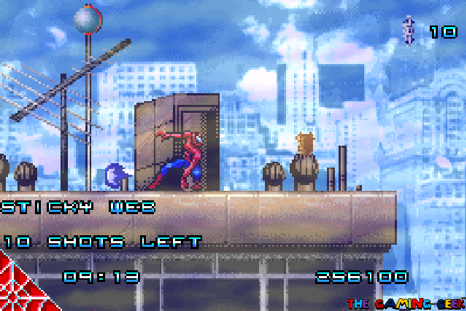 When you pick up a new special power, you’ll leave the old one in it’s place.

Spidey also has a special power mechanic wherein there are several available, but you’ve only got one slot for them. So you have to choose which special power you like the best and avoid getting the others. Each special power has limited charges, but obtaining a different power leaves your previous power in it’s place. So, you can just get your preferred power back. Some are quite helpful, especially the Invincibility power.

Spider-Man also has several moves at his disposal. He’s got a standing three hit attack combo which ends in an uppercut that knocks down most enemies. Just tap the attack button and you’ll string this automatically. 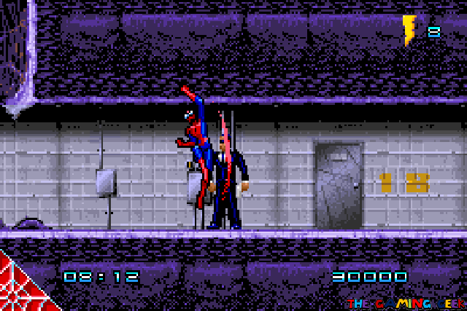 He can also punch enemies when attached to surfaces or while crouching. If a ceiling is low enough, Spidey can punch an enemy from there and be safe from counter attacks. He’s got a flying kick when in the air after a jump. However, Spidey’s most devastating attack is his pounce. The tutorial won’t teach you to do this, and I think it’ll be rare for people to discover this move on their own. 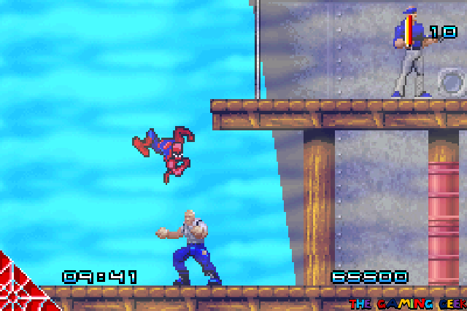 I call this move the Pounce attack.

To execute the move, you need to press Down, slide it Forward and press the attack button. Yes, it’s the Hadoken motion from Street Fighter. When you do this move, Spidey leaps in the air, then crashes down on his opponent. This move kills almost all of the regular enemies in one hit, and deals a lot of damage to bosses. To be honest, this move almost broke the game for me. None of the bosses posed much of a challenge. And there are no drawbacks to using this move at all.

Spider-Man has some bonus content that deserves a mention. First is the web-swinging mini game, which is done in a third person view. Essentially, you’re behind a sprite of Spidey who is web-swinging across town. You’ll need to control his swinging and guess what you’ll need to find? More bombs, this time attached to balloon-like floating devices. 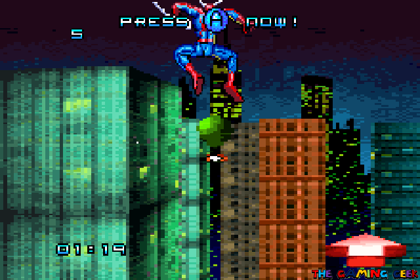 The web-swinging mini game is an attempt to break the monotony of the platforming.

It may have looked amazing when this game first came out, but it didn’t age well. Spidey still looks great but all the buildings are pixelated and the draw distance doesn’t go too far. I didn’t have fun with the mini game itself, and it didn’t have any impact on the game. I understand that they were trying something new, it just doesn’t work any more.

The game also has some unlockable content. Most are in the form of movie stills, which you can unlock by taking photos (pressing Select) when the game tells you to. It may have been neat for kids back then, but nowadays you’re better off hitting Google on your mobile phone for these. 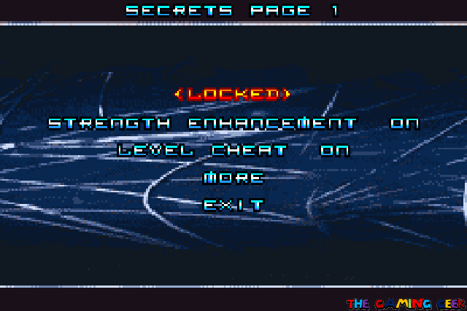 All three secret features can only be unlocked by beating the game.

However, there are three unlockable features that can help future replays go much smoother. There’s an Armor Enhancement mode which reduces the damage that you take and a Strength Enhancement mode that increases the damage that you deal. The best one in my opinion, and the easiest to unlock, is the Level select feature. This will allow you to replay your favorite moments.

I’m glad that the developers went back to using pixel art sprites for the GBA version of Spider-Man. The game has aged better because of it. Spidey looks great, and the developers even have a sprite and animations for Peter Parker. Sprites for the regular enemies are quite detailed. It’s easy to tell them apart, understand what they’re supposed to be, and what they’re doing. And the bosses in this game all look good too. 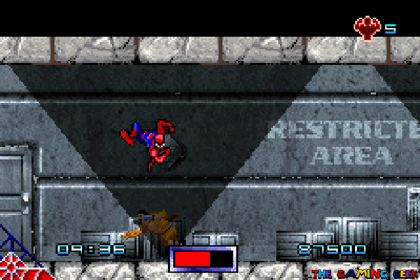 Battle with Kraven the Hunter.

The game will take you to a good variety of locations, and they all look great too. You’ll explore city streets, subways, a museum, underground tunnels, and a lot more. The scene with the parade balloons makes its way to this game too. 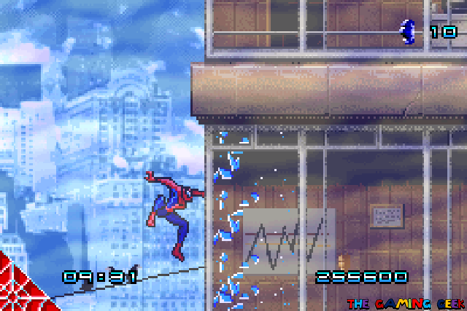 The music of the game is decent, and so are the sound effects. The music in particular fit the action, but they weren’t memorable enough to really stand out. My only complaint involves the effect that they used for Spidey’s web-slinging in the mini-game. It’s a little too loud and strong for my taste. 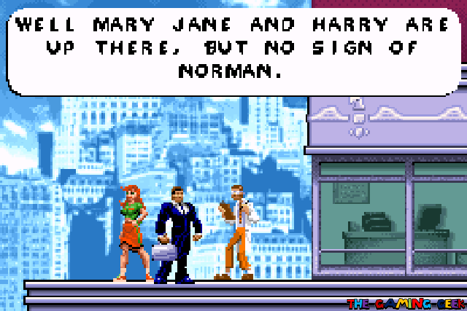 One of the many cutscenes in the game.

In terms of presentation, you can see that the developers really made an effort. While cutscenes used in-game sprites and backgrounds, the developers created sprites for characters like Mary Jane, Harry Osborn, and even Norman Osborn and Peter Parker. They used comic book style word balloons for the dialogue. And there are other small details, like the use of a non-italicized version of the Spider-Man movie font for menus and pre-game text. I love the spider-web style health bar. 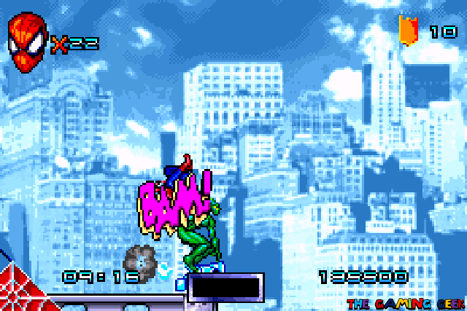 Can you see what happened here? Neither can I.

But they made quite a major misstep too. I love comic book onomatopoeia (e.g. POW! and BANG!) in video games, but not if they obscure what’s happening in the game. Which exactly what happens in this game. Rather than placing these above or around the action, these action words cover up the characters and their movements. I have to admit, this reduces the fun factor of the combat.

One thing I need to say about this Spider-Man tie-in is that I had trouble appreciating it because it plays too fast for me. It doesn’t feel that I’m fully in control of Spidey. I also hate how he doesn’t simply drop from ceilings – he lowers himself slowly from a web-line. Some minor issues but it did affect my enjoyment.

But this game is pretty solid. It’s got lots of action, a decent plot that isn’t a simple rethread of the film, and it’s got large stages for the player to explore. The pounce attack takes out part of the challenge of the game (which is why I didn’t talk about the boss battles anymore), but you can refrain from using it anyway. Reverting to pixel art helped this game age well.

Should you play this game? Yes, it’s worth a preview, at least. I’ve still got three more Spider-Man games for the GBA to try, so I can’t say if this is the best one there is. Spider-Man fans are definitely going to have fun with this game.