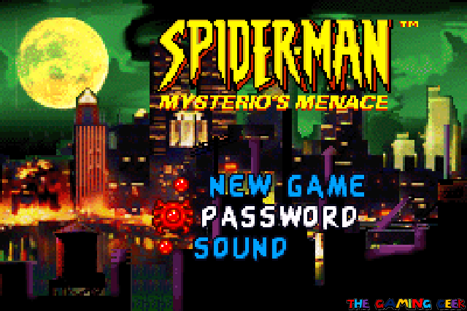 Well, it’s a good time to try this game now. Especially since I’ve been looking back at superhero video games recently. So, let’s talk about my experience with Spider-Man: Mysterio’s Menace.

Spider-Man: Mysterio’s Menace is an action platformer developed by Vicarious Visions and published by Activision for the Nintendo Game Boy Advance. Interestingly, Vicarious Visions was also the studio behind Spider-Man for the Game Boy Color and Spider-Man 2: Enter Electro for the Playstation. By this time, they’ve had good experience in making games based on the wallcrawler, and it shows in this game.

The game starts us off with a scene that shows Mary Jane and Peter Parker in a phone call. Peter hears a news report regarding disturbances at three different locations. He then changes to his Spider-Man costume, which marks the start of our adventure. 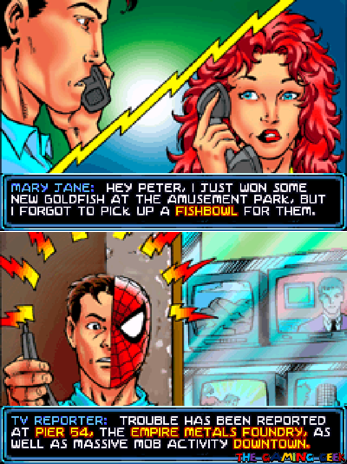 Unlike most action platformer games of this and previous generations, Mysterio’s Menace allows you to choose which stage to play in the order that you prefer. You start with the three stages that the opening scene references, but new stages are unlocked as you beat these. In total, there are only seven stages. Most of these stages are large and will offer plenty of areas to explore. 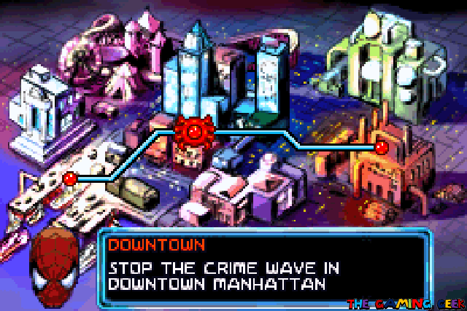 You can choose which stage to play via the game’s Map screen.

There are also upgrades hidden in each of the stages that will make Spider-Man stronger or give him additional abilities. You can go back to these stages if you miss any. The map will tell you if there are unobtained power ups in a stage. You can also visit a stage and stock up on extra lives. 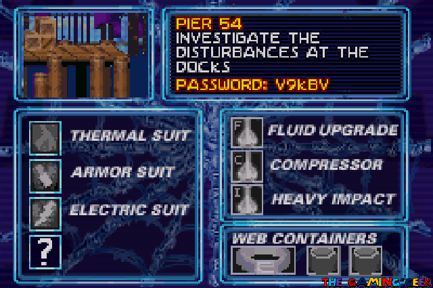 The status screen reminds you of your current mission, and shows the upgrades found.

The game has a Password system, but it only remembers which stages you’ve beaten and what upgrades you have. Finally, the game has three difficulty options: Easy, Normal, and Superhero.

In terms of the basic movements, Spider-Man can so what’s expected from a character in an action platformer. He can jump, crouch, and move to the left and right. He can crawl on floors, up walls, and on ceilings too. In order to attach yourself to a surface, you need to press against it. Spidey wraps around corners now so crawling can get you to most of this game’s areas. He can also web-swing in this game. Web-swinging will usually help you reach areas that wall crawling can’t reach. 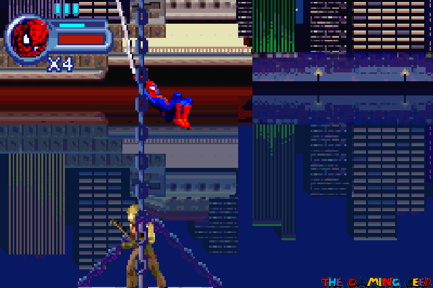 To cross gaps or travel fast, you’ll need to do a lot of web-swinging.

Despite Spider-Man: Mysterio’s Menace being released on a device with just four buttons, Spider-Man can do different attacks in this game. Pressing the attack button does a normal punch. Tapping it leads to a three or four hit attack. Pressing attack while crouched on the ground does a leg sweep that knocks opponents down. When attached to a wall or ceiling, attacking does crouched punches. Pressing Up and the attack button does an uppercut on the ground and a spin-kick in the air. Down and attack in the air does diving attacks. 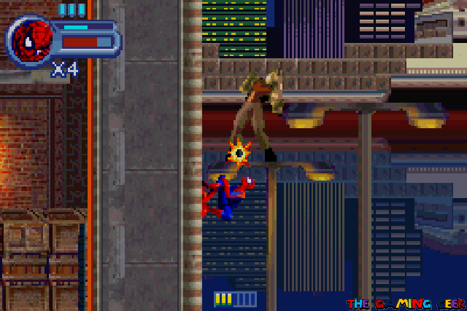 Unlike in other games, you’re not helpless when you’re wall crawling.

Spidey also has two different web attacks. He can shoot a web pellet which damages enemies and can push them back. He can also shoot a web ball that expands on impact and wraps enemies in webbing. The web ball uses up a little more webbing than the web pellet, but sets up your enemies for attack combos. You can aim these shots in the four main directions and their diagonals (aiming down only works in mid-air). Finally, pressing both shoulder buttons brings up a web shield for defending frontal attacks.

Normally, I don’t dedicate entire sections on power ups, but there are so many in Spider-Man: Mysterio’s Menace that are worth discussing. The first notable one is the Spider-Armor power up. When you get it, it adds a second layer of health. Spidey’s regular health bar is colored red, and the Spider-Armor has a yellow bar that covers it. 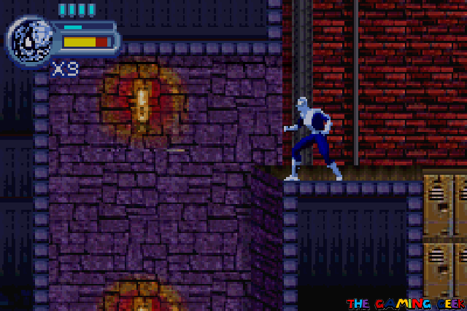 All of Spidey’s web moves consume webbing, and Spider-Man has a web meter and web cartridge indicators in this game. There are power ups that will refill this, and these are plenty. You can also get power ups that refill health or give you extra lives.

The most important power ups are the aforementioned upgrades. They’ll behave like power ups in that they are icons that are spinning and floating in mid-air. Some of these are as basic as web cartridge expansions (you can add an additional four cartridges). There’s one that halves damage done to you, ones that make you immune to electricity and fire based stage hazards, and ones that enhance your webbing.

There’s a secret power up that I won’t spoil that you can get late in the game. I wish we could get that one earlier, but I’m happy to see it nonetheless. These power ups will help you, but I’m glad to report that they’re not necessary. I was able to beat the game on Normal finding only four of these upgrades.

Spider-Man and his Amazing Enemies

Whenever I play video games based on superheroes, I expect good boss battles. Because when you can battle these supervillains, that’s when you can really simulate the feeling of being a comic book superhero. And I’m glad to say that Spider-Man: Mysterio’s Menace did not disappoint me.

I guess it’s not a spoiler if I say Mysterio is the main bad guy in this game because his name is in the title, right? My first compliment to the developers goes to their choices for villains, because I can see each one of them working as Mysterio’s minion. You’ll be able to battle Rhino and Hammerhead early on, which are B-list and C list villains. Both bosses are simple in their design, but are very comic accurate when it comes to their attacks.

You’ll face off against Rhino and Hammerhead in this game.

Hardcore Spider-Man fans should be pleased when they see the Big Wheel in this game. I was quite surprised, because I’d consider this character as a really deep cut in Spider-Man history. Scorpion is also in this game, and the battle with him was quite action-packed.

Scorpion is a boss in this game, as well as the Big Wheel.

Electro and Mysterio bring up the rear. I was a little underwhelmed with the Electro fight, but I guess the developers took that route so that Mysterio won’t get outshined. And man, is the battle with Mysterio a good one.

You’ll need to face Electro before you can finally take care of Mysterio.

Mysterio has several different attacks that showcase his powers of illusion. It’s a tough battle, but once you figure out what to do, it becomes winnable. It’s still not a walk in the park, especially if you didn’t manage to get all of the upgrades.

Spider-Man and his Generic Enemies

But you won’t need to wait until the boss battles to get to awesome combat, because the regular enemies in Spider-Man: Mysterio’s Menace are quite a handful. You’ll face different kinds of thugs, robots, ninjas, and even lab workers in this game. And each one of them has different kinds of ranged and melee attacks that will put you on guard.

For example, I was surprised when I was crawling across a room on the ceiling, when one of the armed thugs actually shot at me at an angle. Henchmen will charge at you when they spot you, and they’ll throw different kinds of explosives at an arc to catch you in mid-air. Some ninjas can jump really high and can even stick to ceilings, taking away your aerial advantage.

But the game’s A.I. isn’t unfair. They’re just smarter than what I’m used to. Even though I’m quite experienced at video games, a generic enemy can still get the best of me and deal damage. Thankfully, health and webbing refills are plentiful. But, you will really need to be alert as you play this game’s levels.

I really don’t like the early days of the Game Boy Advance, when developers were trying to make their handheld games look like home console games. They try making their games look like they’ve got 3D graphics, and Spider-Man: Mysterio’s Menace isn’t an exception. That’s really the only complaint that I have when it comes to the graphics of this game. The sprites are still quite detailed, even if they look a little rough on the eyes.

What I really appreciate when it comes to the graphics of this game are the stages. They’re quite detailed, and they’ve got this effect where the background moves separately from the foreground. I love that even from within a stage, your location changes visually. This gave me the feeling that I was actually moving from one area to another. Some stages do get repetitive, but given the context of what the actual location is, I understand. 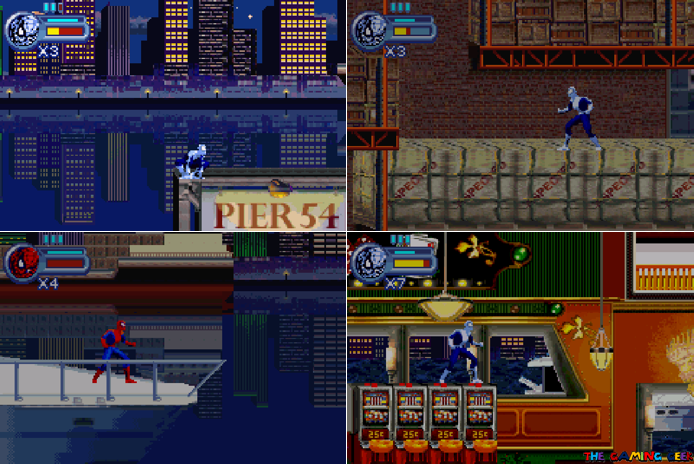 The Pier 54 stage is a good example of how you can incorporate different locations in a single stage.

The game’s sound design is quite good. The developers even included some variety in the stage tracks, wherein some stages have actual music and some have a more ambient track. There’s a factory stage that sounds like you’re actually in a factory when you’re playing it. Most of the sound effects are good too. There are little details like the metal clanks when you’re walking on steel flooring that you hear all throughout. My only complaint is that the developers only used one sound effect for when a generic enemy dies. That happens quite often so the effect becomes repetitive.

The game uses beautiful comic book art in the intro and all of the cutscenes.

I really love the presentation of this game. Cutscenes all use wonderfully illustrated comic book art. I’m not sure if they lifted these from comic books or if they hired actual artists to draw these. The use of art is consistent all throughout too. These just add to the experience of playing a Spider-Man game.

After playing Spider-Man: Mysterio’s Menace twice, I can definitely see why people say that it’s a really good game. The large stages that you can explore and the excellent combat against generic enemies and bosses all contribute to a really good gameplay experience. The plot makes sense and feels correct thematically. The upgrade system helps give players the feel of progression, but it’s not required to beat the game.

The game is a little short, but the addition of the Superhero difficulty and the ability to choose the order of the stages does help add replay value. And hunting for all the upgrades without the help of a guide can also help. I still think that traditional pixel art would have been better, but that’s a personal preference.

Spider-Man: Mysterio’s Menace is a really good game. It’s even better than several Spider-Man games released on 16-bit consoles. This is definitely a must-play for Spider-Man fans and for collectors who enjoy playing Game Boy Advance games.

October is always a good excuse to talk about horror games. Today, we’ll look at a Sega Genesis classic: Splatterhouse 2.

END_OF_DOCUMENT_TOKEN_TO_BE_REPLACED

Slam Dunk was a popular anime series back then. Let’s talk about a video game that’s based on this famous franchise: Slam Dunk: SD Heat Up!!

END_OF_DOCUMENT_TOKEN_TO_BE_REPLACED

Spider-Man 2 for the Game Boy Advance is a sequel that came from the same developers as the previous game. Let’s talk about it today!

END_OF_DOCUMENT_TOKEN_TO_BE_REPLACED

October is always a good excuse to talk about horror games. Today, we’ll look at a Sega Genesis classic: Splatterhouse 2.

Slam Dunk was a popular anime series back then. Let’s talk about a video game that’s based on this famous franchise: Slam Dunk: SD Heat Up!!

Spider-Man 2 for the Game Boy Advance is a sequel that came from the same developers as the previous game. Let’s talk about it today!