I played the first two games in the Spider-Man trilogy of movie tie-ins, so might as well complete the series and check out Spider-Man 3, right? I liked both Spider-Man and Spider-Man 2, so I was expecting a decent game at the very least. 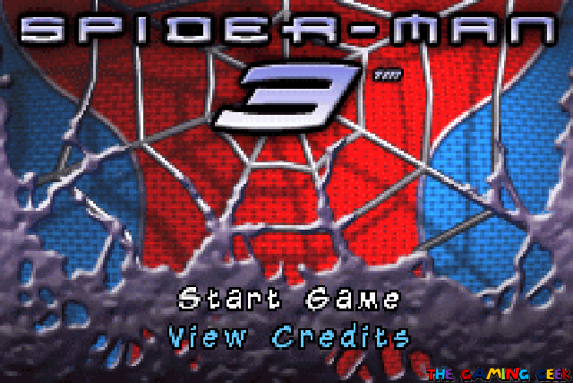 Title screen for Spider-Man 3 on the Game Boy Advance.

Spider-Man 3 for the Game Boy Advance is an action platformer that was developed by Vicarious Visions and published by Activision. I’ve played a handful of games from Vicarious Visions already and I’ve liked them all so far, so I was really interested in what they’ll be able to bring to this game. This is a video game tie-in to the final film in the Raimi Spider-Man franchise. It stays faithful to the source material for the most part, adding a few subplots to the game for more content. 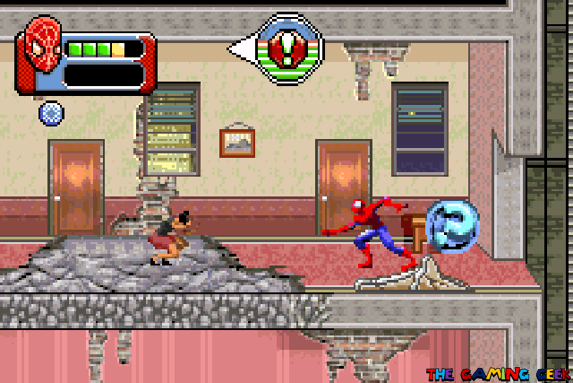 You’ll need to pull this civilian towards you before the floor crumbles away.

Like the other Spider-Man games on the Game Boy Advance, Spider-Man 3’s gameplay revolves around completing different  objectives per stage. Instead of just needing to make your way to the end of a stage, you’ll be asked to rescue civilians, turn off switches, or disarm bombs. By doing this, the developers are able to push players into exploring the game’s stages.

The game has a save system with three slots, and offers three difficulty options to choose from. You’ve got a health meter in this game as well as an unlimited number of lives and continues. Whenever you die, you just restart the stage or section that you were in.

In Spider-Man 3, you will be able to perform the moves that you’ll be expecting from a Spider-Man game. Spider-Man can crouch, walk to the left and right, and jump. He attacks via punching, and tapping the attack button multiple times results in a combo string. He can do jumping attacks as well. 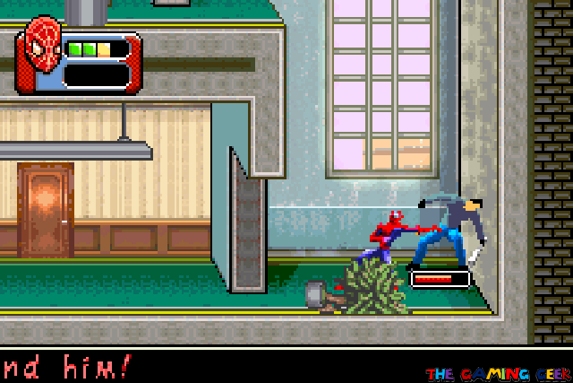 He can crawl across surfaces quite easily, just press against a ceiling, wall, or floor and he’ll attach himself. He wraps around edges in this game, which means you can crawl up to most areas. 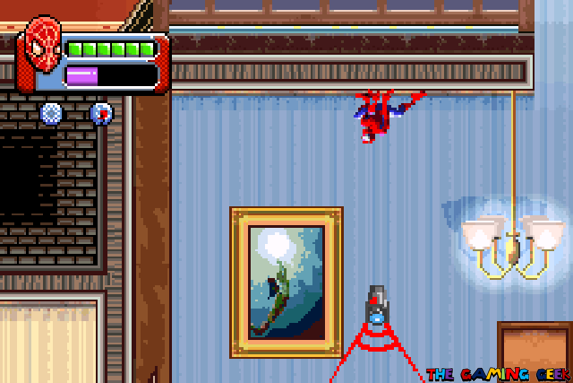 You can move across the ceiling to avoid enemies.

And of course he uses webbing a lot in this game too! You can shoot web-lines forward, upward, or diagonally up and forward. These can web up enemies, pull civilians toward you, or pull you towards walls and ceilings. 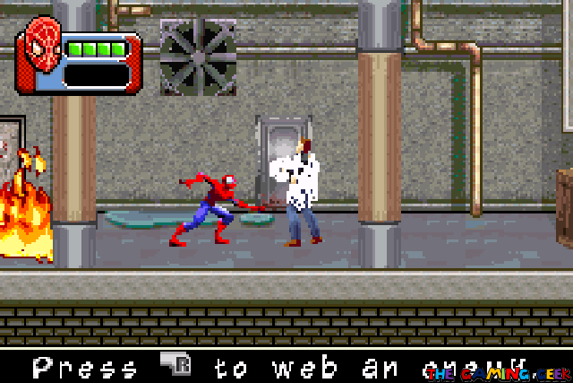 Webbing up enemies will stop them from attacking you.

And no Spider-Man game will be complete without web-swinging. As with Vicarious Visions’ other Spidey games, web-swinging in this game is a breeze and is very fun to do. As an added bonus, swinging also counts as an attack! Yes, you can destroy boxes and deal damage to an enemy if you swing into them! Webbing is unlimited in this game, so use your webs whenever you need them. 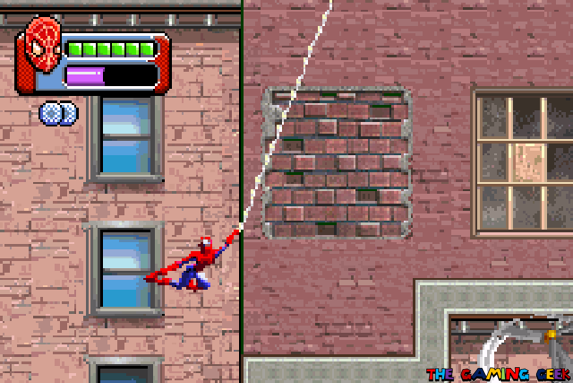 Spider-Man has other moves, some of them he can learn after defeating bosses. To be honest, I never had the need to use them in my playthrough save for a split kick that hits enemies on either side of Spidey. They’re there if you want to use them, but you can beat this game using only basic moves.

Ability Upgrades and the Black Costume

There aren’t a lot of power ups in Spider-Man 3. In addition to your standard health refill, you’ve got two that enhance your abilities. There’s one that looks like a fist; this one increases your damage. 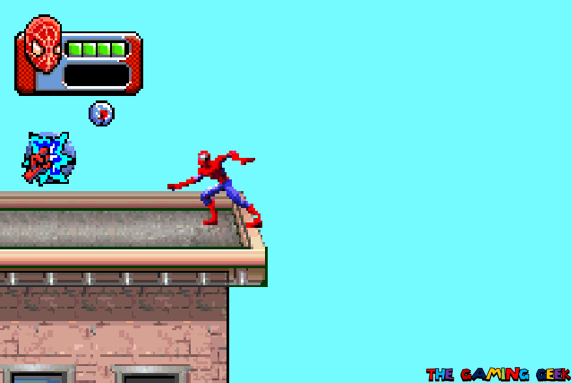 There are plenty of these scattered around in every stage.

The other one looks like webbing and this increases the holding power of your webs, restraining enemies longer. These power ups will upgrade your abilities for up to three additional levels each stage, which will be indicated under your health meter. You won’t get to keep them, but there are a lot of them hidden in every stage so you won’t have trouble being at maximum. 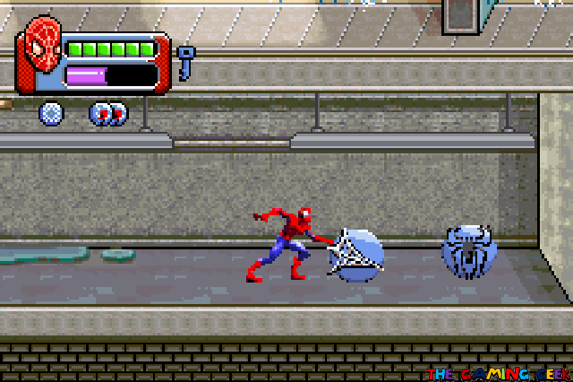 It’s easy to tell what these power ups do.

A third power up comes in the form of a spider logo. This automatically brings up your black costume. The black suit also comes up when the Rage meter – a purple bar underneath the health meter – fills up completely. Attacking enemies and destroying objects adds to this Rage meter, while taking damage reduces it. 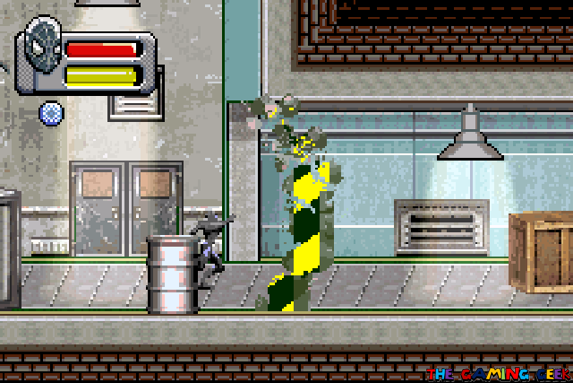 You can destroy some walls when you’re wearing the black suit.

In the black suit, you deal more damage. There are some walls that you can only break through if you’re in the black suit, but there’s only one in the game that you’ll really need to destroy to progress. One hit from an enemy turns you back into normal Spidey, but you’ll be at full health even if you weren’t before you turned black. So if you’re near death, you can try to get into the black suit which essentially tops up your health meter.

Like any other superhero video game, my enjoyment of Spider-Man 3 depended a lot on how good the boss battles are. The moments when you’re battling supervillains are the moments that really make you feel super-heroic. Thankfully, the boss battles in this game are good enough. 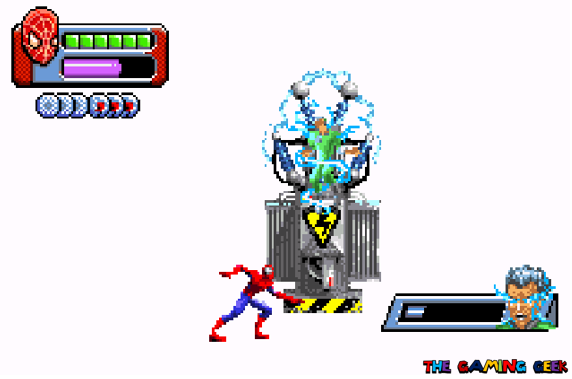 Electro makes a shocking appearance in this game.

Despite not being in the film, Electro makes an appearance here. To beat him, you need to overload him by knocking him into generators. The New Goblin and Venom are obviously in the game, and their battles are a recreation of the events in the film. The best boss battles though are the ones against the Sandman, who you’ll face several times. 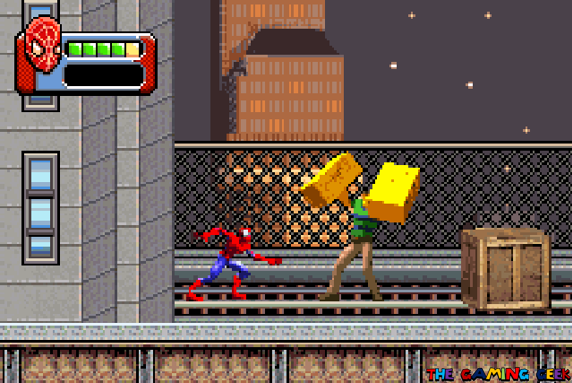 You’ll face the Sandman several times in this game.

The battles with Sandman vary. In one of them, you’re running away from him because he’s too powerful. Once you have the black suit, you’ll need to chase after him. The final sequences involve Sandman at his most powerful. These are the moments that I enjoyed the most, to be honest.

One thing that I don’t like about Spider-Man 3 are the graphics. The stages and backgrounds look good, but the character sprites are worse than what we saw in the other Spider-Man games that came before. They lack clear outlines and appear quite pixelated. They’re animated well, but I’ve seen better from Vicarious Visions. And this is just one scene but, their version of the Kingpin is much bigger than Spider-Man. 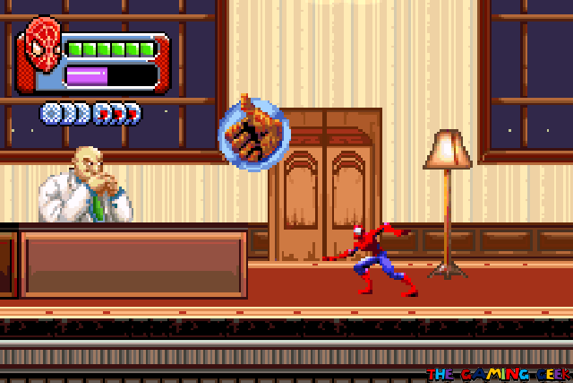 I can’t forget how disproportionate Kingpin is when compared to Spider-Man.

In terms of sound, this game does it’s job. Sound effects are apt to what they are representing, and the game has a decent selection of different tracks. These fit well with Danny Elfman’s film score, so it really sounds like it’s related to the movies. 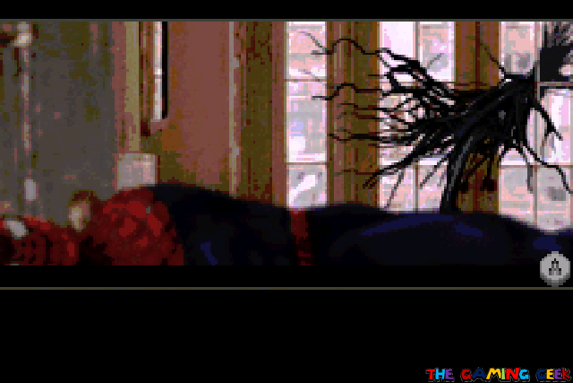 The game makes use of a lot of static cutscenes.

As for presentation, the game has a lot of cutscenes which make use of static illustrations. I want to like them, but I’m just not a fan of the art style that Vicarious Visions uses. The cutscenes do a great job of relating the game’s plot, except for the ending which just stops the game after defeating the final boss.

Spider-Man 3 is a decent game that continues what it’s predecessors did well and tries some new and interesting ideas. It controls and plays well. I had fun with it, but it’s a little unremarkable. In some ways, this is a step back when compared to the previous game, in terms of graphics and innovations. If you play the Spider-Man movie tie-in games in succession, you might get a little disappointed.

This is an average game with minimal flaws, but it’s hard to find a reason to strongly recommend it, aside from the boss battles which are good, but not the best ones that you can experience in Spider-Man video games. If you’re a Spider-Man or superhero fan, you’ll enjoy this game, You’ll want to add this on your list of games to play or collect. Someone who isn’t a superhero fan might find this game boring or lackluster, so you’ll probably want to play something else.