I don’t think I’ve already written about a game like Spider-Man 2. It’s a sequel that was released for the same device that I played the original on. It is based on the same property – the Spider-Man films directed by Sam Raimi. More importantly, this sequel is from the same developers as the original. 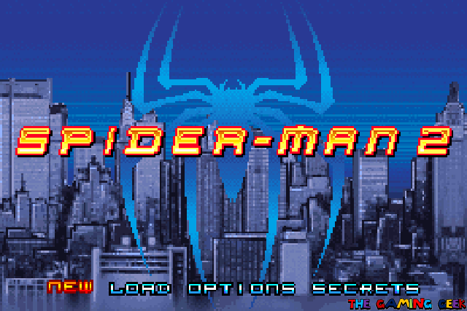 Title screen for Spider-Man 2 on the Game Boy Advance.

So when talking about Spider-Man 2, I can’t just talk about whether it’s a good or bad game. The real question is, is it a good sequel?

As mentioned above, Spider-Man 2 is the sequel to Spider-Man. Both games have been released in different forms on different consoles, but I’ll talk about the Game Boy Advance versions specifically. Similar to the first game, this game is an action platformer. The sequel also references the events of the film but also adds elements to it. So, you play the role of Spider-Man who now has to face a new threat in the form of Doctor Otto Octavius. 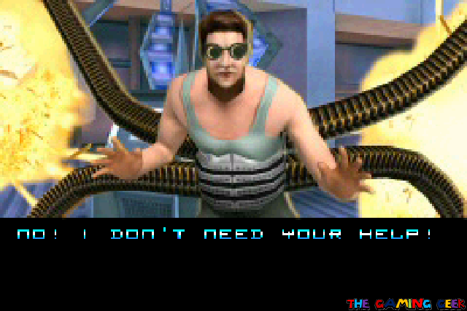 In the game, you’ve got a health meter. You also have lives in this game, and you start the game with three of them. When you die, you respawn immediately at the same spot, even during boss battles. The game also has a save system with three save slots. There are no difficulty options for the game, nor other extra game modes.

The game does have a Secrets option. Most of what you can unlock are stills from the Spider-Man 2 movie. But you can also unlock a level select feature, as well as all of Spider-Man’s moves and abilities when you beat the game.

A Day in the Life of Spider-Man

What’s really makes Spider-Man 2 unique for me as a 2D platformer is the addition of side missions. After the first few stages, you’ll start needing to go through what the game calls a 3D hub. In this hub, you can explore the city and choose to either go for the main missions (the green dots/arrows) or take on the side missions first (the yellow dots/arrows). 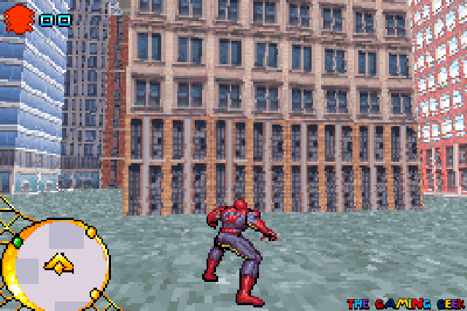 This game tries its best to give you 3D exploration sequences. 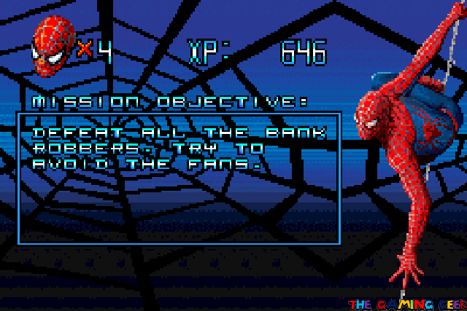 These side missions show what a friendly neighborhood Spider-Man does.

And you know what? These actually increased my immersion. It was also quite refreshing for me. Superheroes don’t just battle supervillains all the time. They’re really known for helping people, and this game did a good job of reminding me of that. The most important thing is that these side missions are optional. If you’re not interested in them, you can skip them and head directly to the main missions.

Both Spider-Man and Spider-Man 2 have almost exactly the same move set, so I’m almost tempted to just copy and paste what I wrote about the previous game here. But there’s actually some improvements. Same as before, you can do the usual moves that you can expect in platformers. Like walking left and right using the D-Pad, as well as crouching. He can also crawl up surfaces and here, he wraps around corners easily. The developers also addressed the issue of Spidey lowering himself slowly from ceilings – in this game, he can drop quickly again. 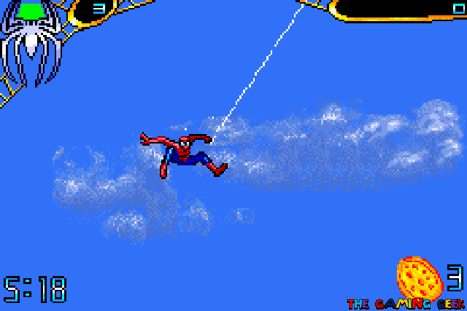 Swinging is much more satisfying in this sequel.

Spidey also shoots web-lines in two different ways in this game. He can fire off a web-line in the middle of a jump, and you can do this continuously. This is much more reliable in the sequel, so feel free to swing to your heart’s content. 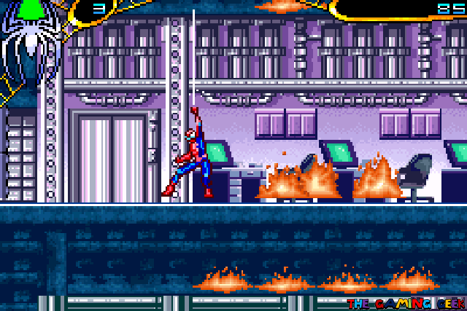 Get up to the ceiling quickly with a web-line!

The second way to shoot a web-line is to press the R button. Spidey can shoot a web-line even while standing, and when this hits a stationary object, it will pull him towards it. By default, Spidey aims this diagonally but you can press up, left, or right to aim it in that direction. This will still help you reach areas that are otherwise out of reach, and can help get you out of trouble quickly too. Shooting web-lines won’t reduce your web meter, so you can do this as often as you like.

Yes, there’s a web-meter in this game. Shooting web balls at enemies drains this meter. Web balls serve as projectile attacks and their default setting won’t wrap enemies in webbing. Rather, they just deal damage to them. 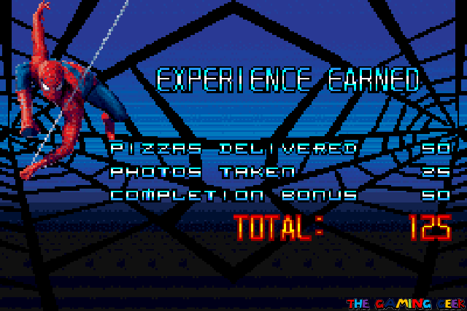 The game’s experience system is a good way to give you the feeling of progression.

You can then use these experience points to purchase upgrades. Most of these upgrades are new moves for Spider-Man to learn. None of these new moves are necessary to beat the game but some of them are quite helpful, like the sliding kick that I ended up using quite often. 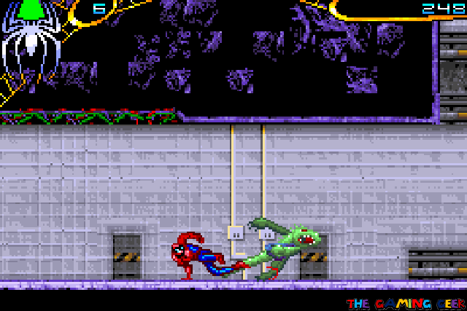 To do the slide kick, just tap forward twice.

However, what you really need to be aiming for are the passive upgrades. I can remember four important ones: Faster Movement, Increased Health, Increased Damage, and Increased Webbing. These upgrades are game changers, and are always on once you get them. 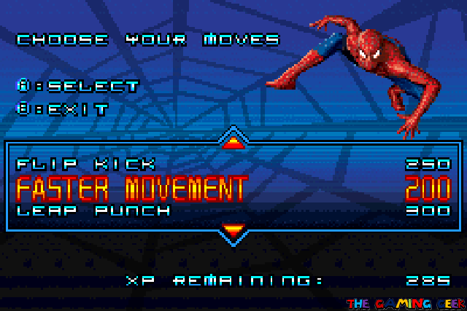 Aim for the upgrades first before getting any of the new moves.

Speaking  of bosses, I loved the boss fights in Spider-Man 2 a lot. One of the things that I didn’t like in the first game was that all of Spider-Man’s villains there were hired by Norman Osborn. In this game, only a handful of them are working with Doctor Octopus (I won’t spoil which ones). It’s nice to see how the developers were able to fit everyone within the film’s storyline. Yes, the film’s plot. 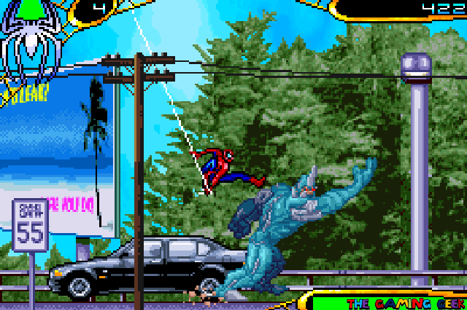 You need to chase Rhino and try to stop him from escaping.

Well, some of them were really just inserted into the plot, like Rhino. But because the game has side missions anyway, you get used to events not involving Doctor Octopus happening. The battle with Rhino has you chasing after him as he’s trying to run away from the police. 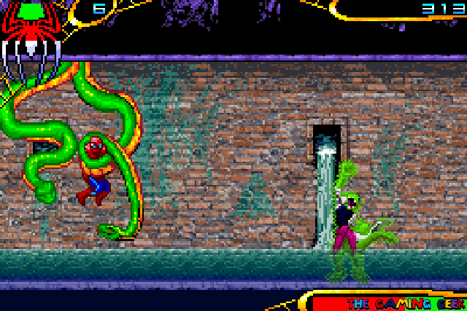 The Lizard will send other reptiles against you.

You also fight villains like the Lizard, Mysterio, and Shocker in this game. The battles with them work like typical boss fights, but they’ve got enough attack variation to make fighting them quite satisfying. 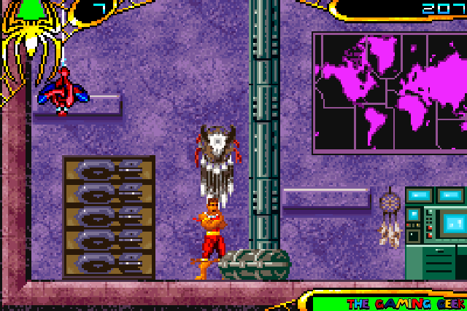 Freakin’ Puma is in this game! I was quite surprised!

The highlight of the bosses for me is the inclusion of Puma. The actual fight with him is a bit underwhelming, but just the fact that the character made it into the game is amazing. If you don’t know who Puma is, well, you’re probably not a big enough fan of Spider-Man. I just like it whenever his less popular villains get some time in the spotlight.

When talking about the main game itself, I’m quite happy with the graphics of Spider-Man 2. I prefer this style over what they used in the previous game. Sprites look a lot better for me. Spider-Man moves the way I’d expect him too. And I can easily identify all of the game’s enemies and what they’re actually doing. 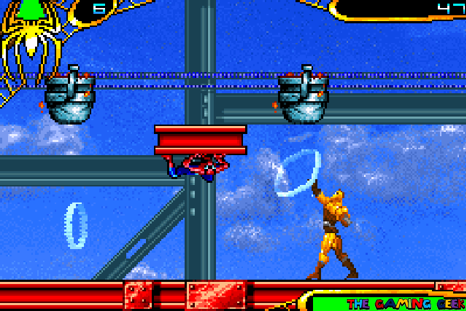 Enemies in this game can aim towards you.

The stages of the game are quite varied, and they’ve got a lot of details in the backgrounds. You get to visit a prison, a bank, city streets during the day and at night, and so on. You’ve got wide open areas and locations that are more closed, such as the sewers. 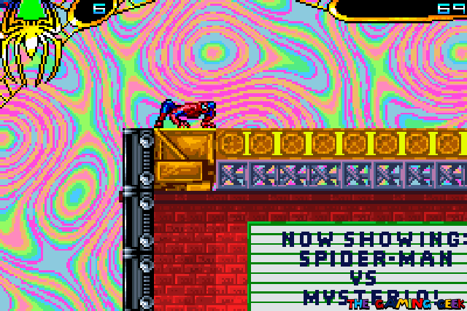 In terms of music, this game does okay. I liked the music but not much stood out for me. They were fine to listen to while playing the game though. I don’t recall moments where the game used music from the film aside from the opening intro, and I think that’s a missed opportunity. The game’s sound effects are alright too, for the most part.

The single blemish in this game’s sound design is that sound effect that they used for Spider-Man’s jumping. Whenever he jumps, he mutters “ugh!” which makes me think that he took damage from something. It really doesn’t fit; there are better yells and grunts for jumping than what they used. 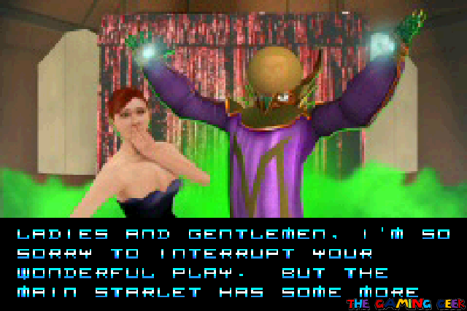 The cutscenes for this game don’t hold up well.

I hate to knock this game for it’s presentation because the developers did make an effort in polishing this game. But I question their decision when it comes to choosing an art style for this game’s cutscenes. What they used are still images of primitive looking 3D renders. I think that they would have been better off if they used illustrations instead of these renders.

Spider-Man 2 continues what the previous game did well, and improves on what the previous did poorly. And to be honest, I’m getting a little burned out from reviewing superhero games, but I still managed to enjoy this game a lot. The side missions were quite refreshing, the game mechanics have been refined, and overall this game just plays really well.

Yes, this game has flaws. I hate hearing Spider-Man’s jumping grunt so much it makes me want to turn down the game’s volume and listen to something else. And the art used for this game’s graphics are laughable by today’s standards. The 3D hub sections are also quite rough. But these are just annoyances that don’t significantly impact the game experience. I enjoyed this game enough to recommend it to any superhero fans and especially to Spider-Man fans who want a good Game Boy Advance game to play.