The idea of Justice League: Injustice For All seemed quite impossible. How could you design a video game for the Game Boy Advance that’s based on seven superheroes that had a wide range of superpowers? The Game Boy Advance isn’t a powerful system. So this seemed like quite a daunting task. Well, I recently played the game, so let me talk about it. 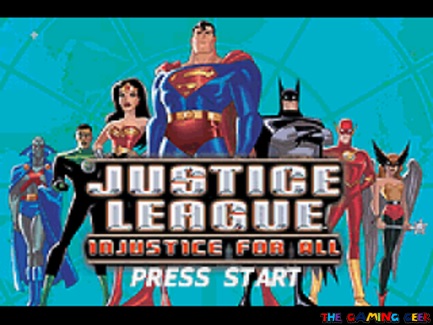 Title screen for Justice League: Injustice For All for the Nintendo Game Boy Advance.

Justice League: Injustice For All is an action platformer developed by Saffire and published by Midway Games. The game is based on the DC Animated Universe incarnation of the Justice League. The game features all seven members of the popular cartoon: Superman, Batman, Wonder Woman, Green Lantern, Flash, Martian Manhunter, and Hawkgirl. The plot of the game involves Lex Luthor recruiting several villains and sending them out to wreak havoc worldwide. Calling themselves the Injustice Gang, it is up to the Justice League to put a stop to them. 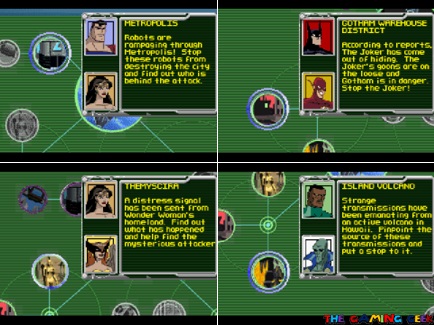 You get to play different pairs of Justice League members throughout the game.

Because the heroes are dealing with multiple villains, they pair up in different combinations as they try to deal with the Injustice Gang. The game starts with a stage select screen where you can choose which level to play. You are assigned a pre-determined pair of heroes for each level.

My first problem with this game involves how the heroes were designed. Each Justice League member plays quite similarly with the rest, with only a few differences. Everyone throws a punch with the B button and do a strong attack if you hold that button down. The A button is for jumping. The D-pad controls their movement, and they have the ability to crouch. Pressing Select swaps your current hero with his/her partner. 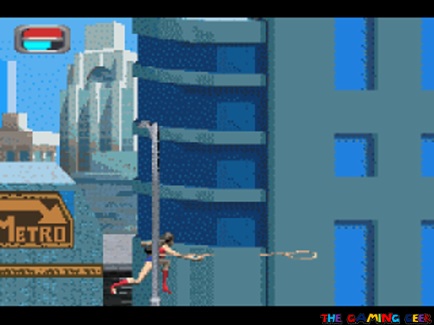 The L button triggers a special power, and this is what differentiates the heroes from each other. Superman shoots his heat vision. Wonder Woman uses her lasso to stun and pull an enemy closer. Batman throws a Batarang which hits enemies twice. The Flash dashes forward and can run up walls. Green Lantern covers himself with a force field that blocks all damage. Hawkgirl attacks with her mace. And the Martian Manhunter becomes intangible, allowing him to pass through walls or for attacks/enemies to pass through him. 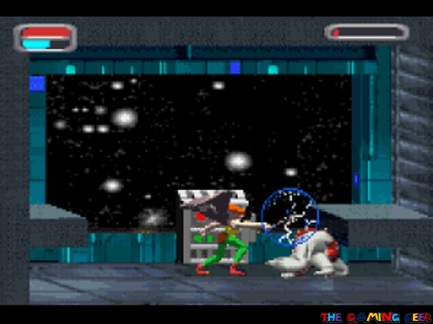 Some powers are more useful than others, so there are balance issues. And this gets even worse. The R button toggles from flight mode to walk mode. This doesn’t work for the Flash and Batman, as they can’t fly. There’s no reason to choose a grounded character over a flying character. I guess the developers realized this because in some of the stages, they made up reasons for some of the characters to lose their flight ability. 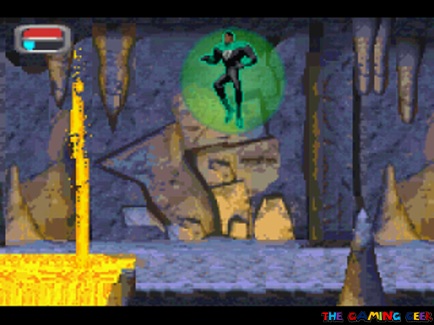 If you have the option to play as Green Lantern or Martian Manhunter, they’re hands down the best characters. There’s no real reason to play as Flash or Batman. Wonder Woman, Superman, and Hawkgirl play almost exactly the same.

Each of the levels will take you to different locations on Earth. And the level design is decent, with most requiring a good dose of exploration. There are even some secret areas filled with power ups. However, some of the levels are ruined because of the powers of whoever is in the level. For example, there’s a stage with Batman and Superman. I would have had to do some tricky platforming with Batman. But Superman allows me to bypass all that.

The power of flight is such a big advantage in this game.

There are levels with stage hazards that the Flash would have trouble with. But if he’s got Green Lantern or Martian Manhunter with him, you can simply switch to them and render the hazards useless. 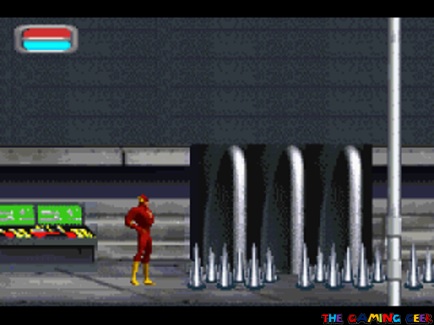 The Flash would have trouble with these spikes.

The game also has several of the League’s renowned villains but, their design is so generic. Most of them do the same thing – stand at one place while firing a projectile, follow a simple movement pattern, then fire again. Characters like Star Sapphire, Solomon Grundy, the Joker, and Cheetah are all in here but they only look the part. 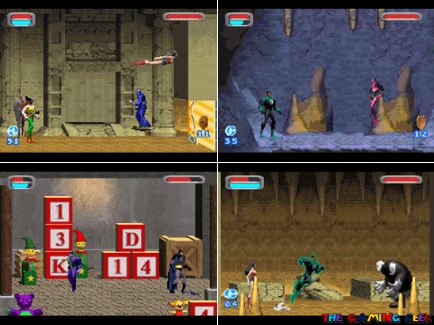 The final boss fight is a little bit interesting. The boss himself has two forms with really powerful attacks. Instead of having only a pair of heroes at your disposal, you have all seven of them. The idea was interesting, but the execution makes the final boss fight really easy because you essentially have seven lives.

I really don’t like this era of handheld video games. A lot of developers try to give their handheld games home console-quality graphics by using a style that appears to make use of 3D models. But it just doesn’t work. I would have preferred sprites and pixel art instead. As it stands, the graphics of this game are colorful but quite rough. Characters and enemies are recognizable but lack definition. Stage assets are colorful but also suffer from the same roughness. 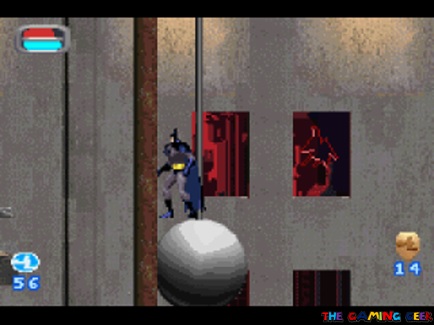 Batman is the weakest character in this game.

The sounds of this game are also very generic. There are only a handful of stage themes, so they are used across two or more stages. Listening to this game doesn’t make my ear hurt, but it’s also not enjoyable.

The story of the game is told through conversations with the Justice League members and villains in between and at the end of levels.

In terms of presentation, I did like the use of the art from the DC Animated Universe. But they’re also quite rough, like they used really small images and blew them up so a significant amount of detail is lost. The story is told via dialogue scenes, which appear a few letters at a time. It was a little too slow for me, so I often find myself pressing the A button, hoping to speed the dialogue up. However, that skips the scene entirely, so I actually missed several of the dialogue scenes.

Justice League: Injustice For All isn’t a terrible game. It is playable, has decent level design, and working game mechanics. But the game is held back by it’s generic character and boss design, bad graphics and generic sounds. If this used traditional pixel art, this would have probably looked much better.

Maybe if they designed each level to play differently, instead of making most of them platforming stages? Like have racing stages with the Flash that has no combat, flying stages with Green Lantern, and so on. It was ambitious to even attempt to develop a Justice League game for the Game Boy Advance. Some part of me can’t help but think that this is just a cash-grab, taking advantage of the Justice League brand to get parents to buy copies for their children.

That’s the demographic that I’d recommend this game to. If you have a young child who likes these characters, then Justice League: Injustice For All should be enjoyable for them. It’s an easy game with basic mechanics. Anyone older than nine would probably find this game lackluster.