I still have vivid memories of Justice League Heroes: The Flash even though it’s been more than a decade since I last played it. This was one of the games that I was really looking forward to revisiting because of how much I loved it when I originally played it. 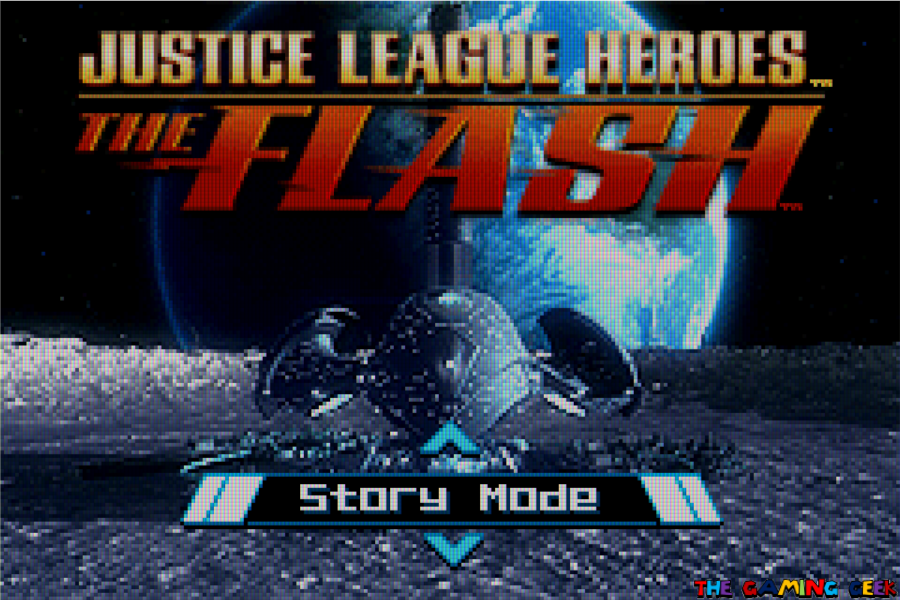 Title screen for Justice League Heroes: The Flash for the Game Boy Advance.

Justice League Heroes: The Flash is a beat ’em up game developed by WayForward Technologies and published by Warner Bros. for the NA region and Eidos Interactive for PAL regions. It is actually a side story of Justice League Heroes, and shows what The Flash was doing while all the other Justice League members have their own missions. Despite having the Flash as the only playable character, this truly feels like a Justice League game because the others keep making appearances in cutscenes and as assists. 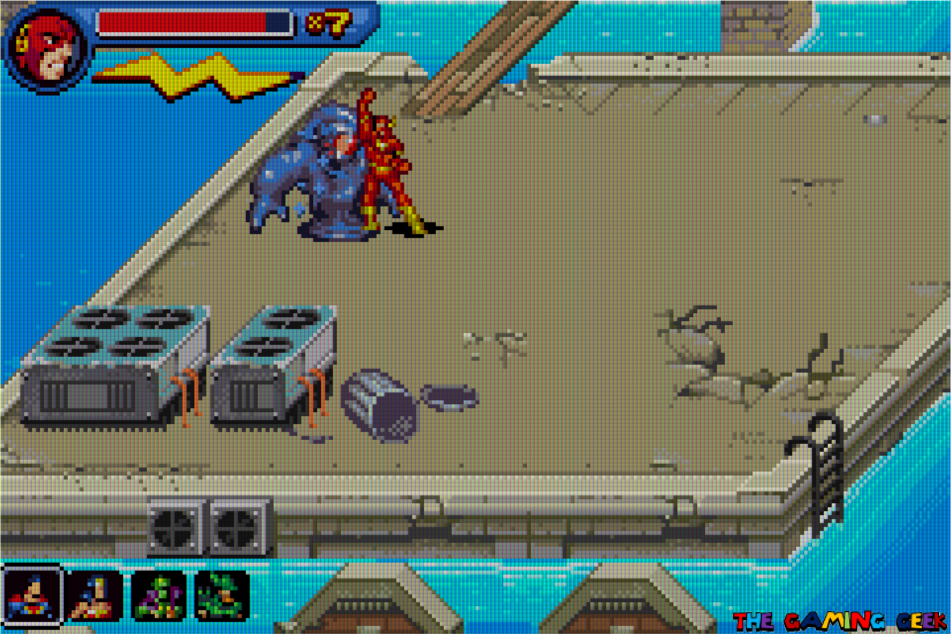 The Flash’s combo finisher is an uppercut.

In this game, you’ve got a health meter and an energy meter, as well as a number of lives. You lose a life whenever your health meter gets depleted. There are extra life power ups hidden throughout the game’s stages, but you can only get a maximum of nine. When you lose all your lives, it’s game over. The game does have a save system and three save slots, so you can continue where you left off. Finally, the game has some unlockable content, including special play modes that I’ll get into more details later.

In Justice League Heroes: The Flash, stages use planes instead of platforms. The D-Pad controls movement, with up and down moving into and away from the foreground. The B button is for punching, and tapping it will result in a multi-hit combo. Landing your hits will refill your energy meter. 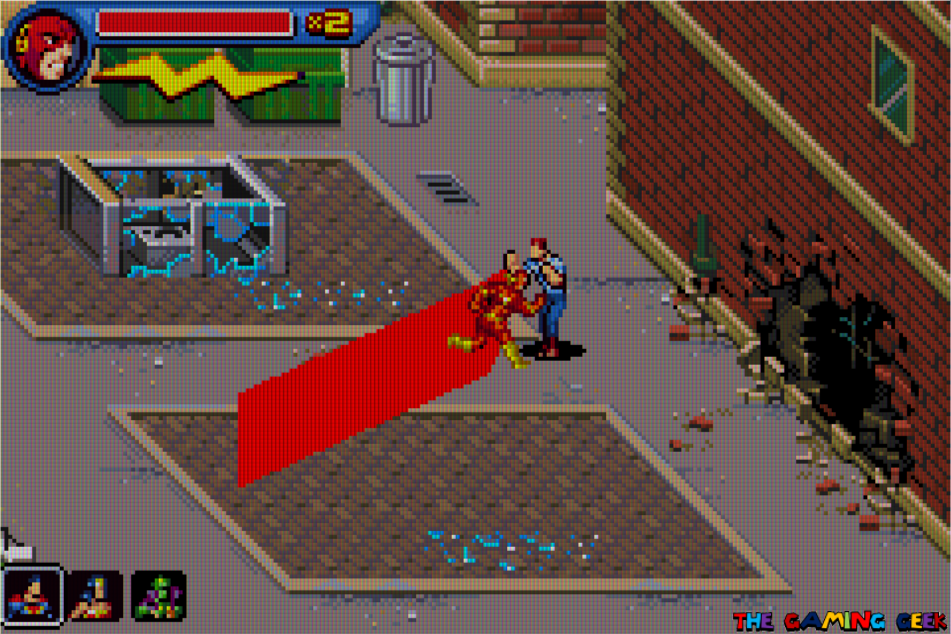 You can dash towards your opponents and take the initiative.

When there is an enemy nearby, you can press the A button to dash towards them. This uses up a bit of energy and is auto-target, and won’t work if there aren’t any enemies. This speeds up the action a lot. It can also be clunky if there are enemies right beside each other, because you might end up dashing toward a different enemy. 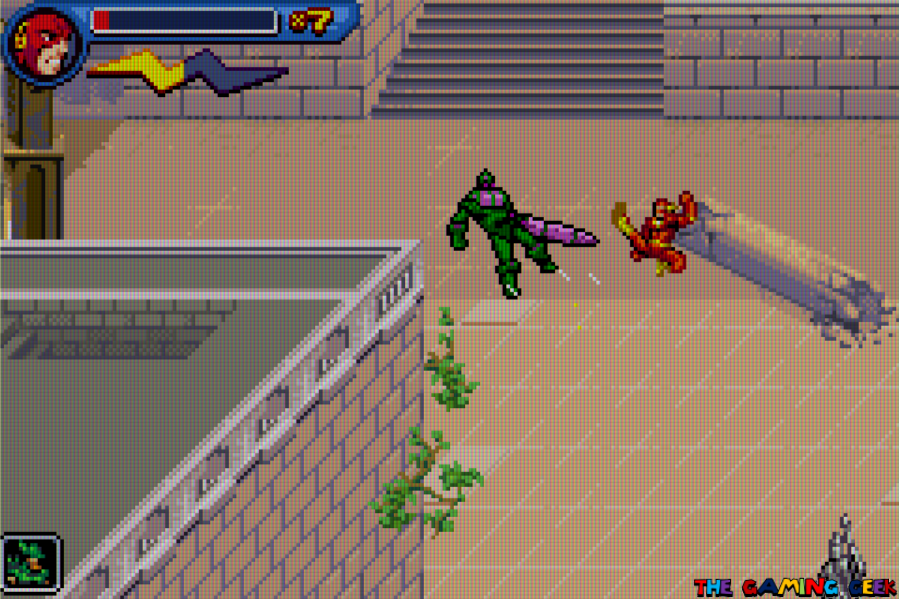 Knock enemies down with the jump kick.

Pressing B and A together does a jumping kick. There isn’t any platforming in this game, and barely any pits or hazards on the ground, so there isn’t a lot of need for jumping. This does knock some enemies off their feet, so it’s still handy to have. Pressing the R button makes The Flash go into a faster mode. He’ll yell “Fastest Man Alive”, the ground will shake, and enemies all around him will slow down. Doing this drains the energy meter at a really fast rate, but enemies are also highly vulnerable in this mode. 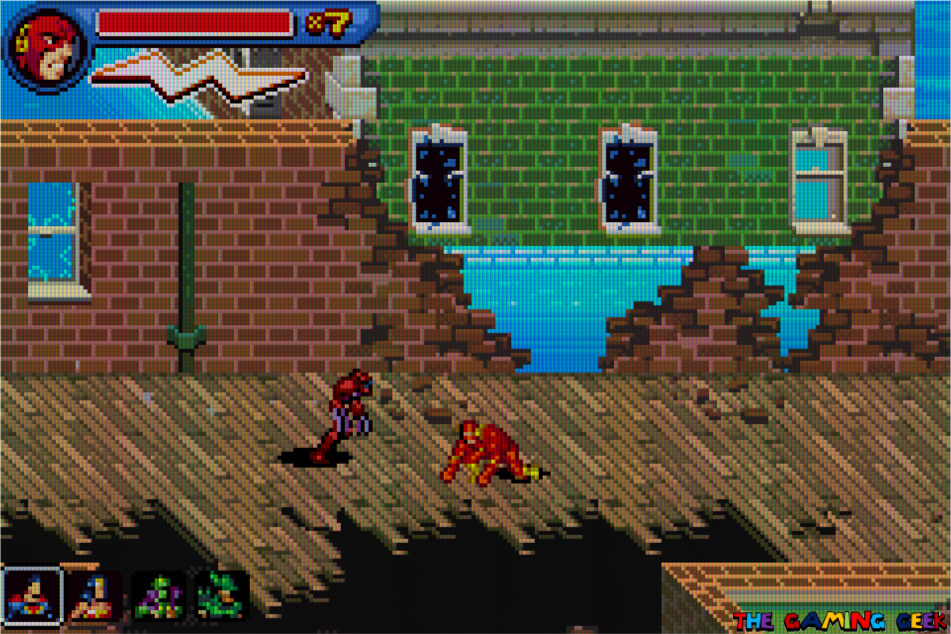 Later on, The Flash will learn two moves that aren’t necessary but are there if you want to use them. He can do a run-around if you hold the B button down and do a 360 motion with the D-Pad (hard to take a screenshot of). And he’s also got a ground pound move that he’ll do if you hold B and quickly press up and then down.

Justice League Heroes: The Flash is truly a Justice League game because the League members are always around. Pressing the L button will summon one of the Flash’s teammates, who will enter the screen and do a screen-damaging move. What I like about this a lot is that each hero does one of two moves. While the difference is only visual, it does add a lot of flavor to the game. 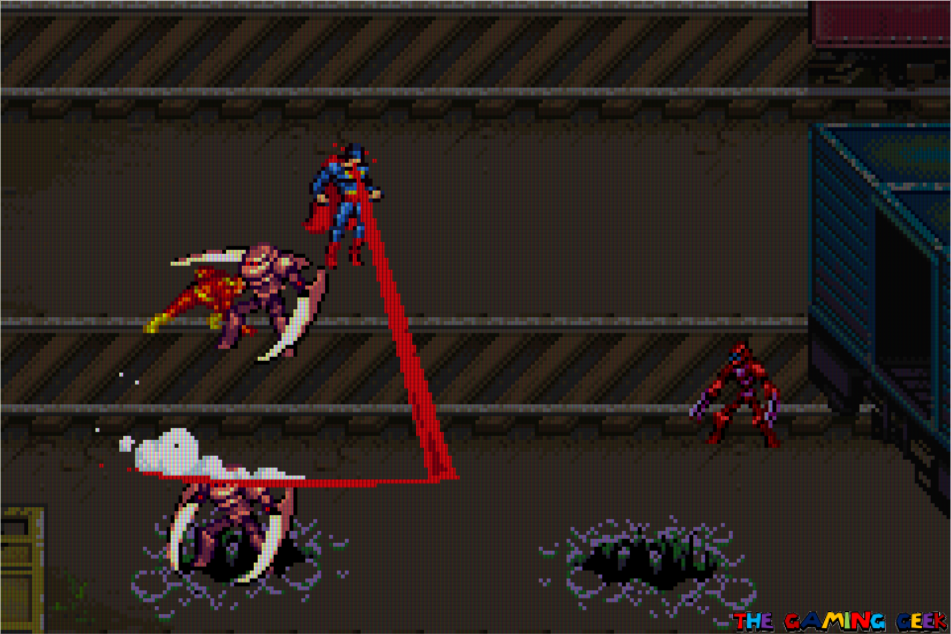 At the start of each stage, you’ll have three of the superhero assists available to you: Superman, Wonder Woman, and Martian Manhunter. Unfortunately, you’ll have to use them in that order. There are power ups that will refill this, but it also replenishes Superman first. I wish that there was a way to cycle through your available superhero assists. Later on, Green Arrow and Black Canary will become assists as well. 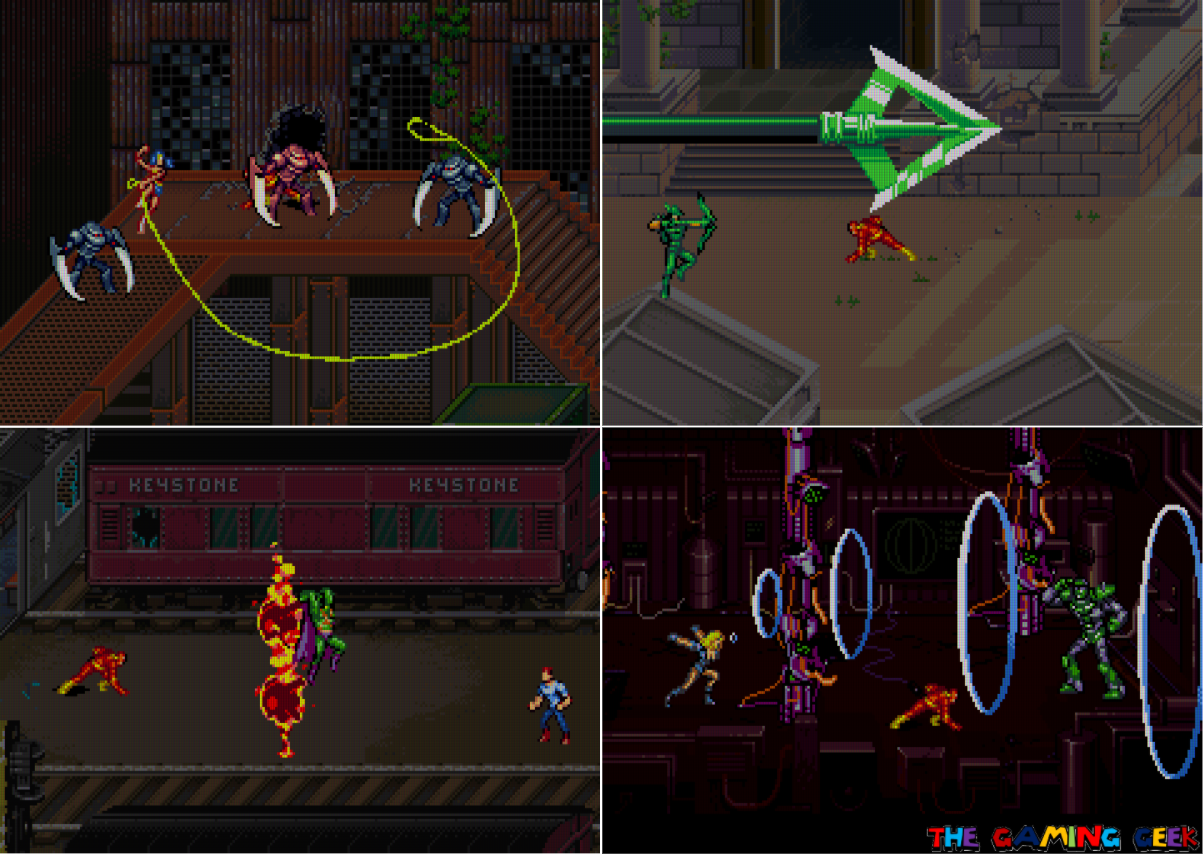 Another nitpick: Batman isn’t an assist. It’s weird because he’s in the cutscenes and one of the stages is in Gotham City. He could swoop in with a swinging Batgrapple kick, or toss explosive Batarangs. But he’s not an assist. Black Canary is an assist, and Batman isn’t. Another minor issue which shouldn’t affect your enjoyment of the game.

I love Justice League Heroes: The Flash a lot, but I have to call out one annoying flaw that involves the game’s hit detection. It’s a little hard to explain so bear with me. In beat ’em up games, you can move up and down to change your “elevation” and go inside and outside your enemy’s range. It’s the same case in this game. 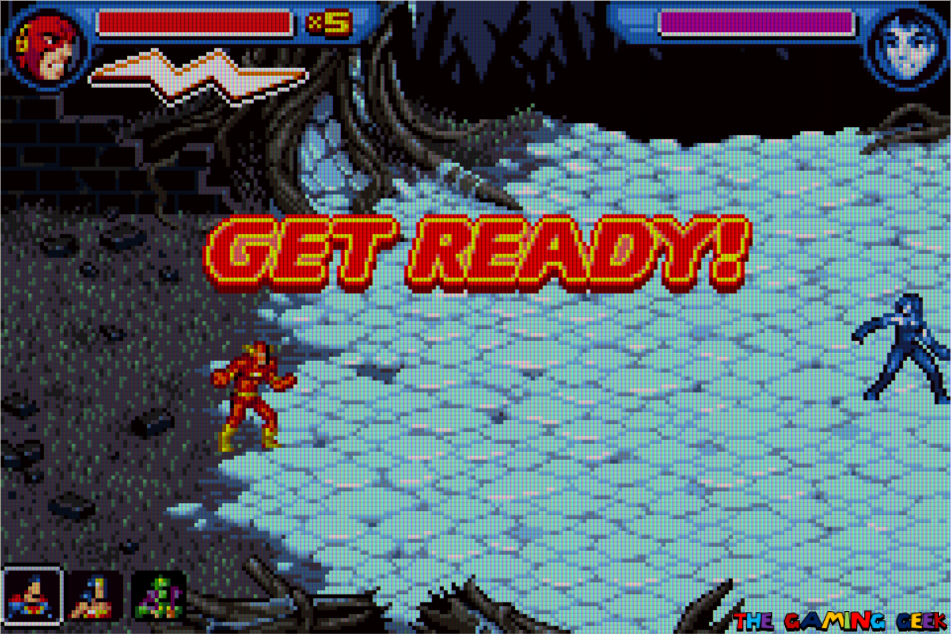 There’s this weird quirk that happens when you’re “higher” (or closer to the background) than your enemy. What happens is, your enemy can hit you, but your attacks won’t hit them. In other beat ’em up games, all you have to do is move down a bit so you can be in-line with the enemy. But in this game, you won’t be able to move down because the enemy is blocking the Flash in some way. You have to move away, adjust your placement, then move back towards the enemy. It’s really annoying and you can easily lose a lot of health because of this flaw.

When playing superhero games, I look forward to the boss battles the most. This is when you get to face supervillains as your favorite superhero. And man, Justice League Heroes: The Flash did not disappoint me with it’s boss battles. First, the game offers a good roster of supervillains: Flash enemies Gorilla Grodd and Zoom, and Justice League villains Circe, Killer Frost, and Brainiac. 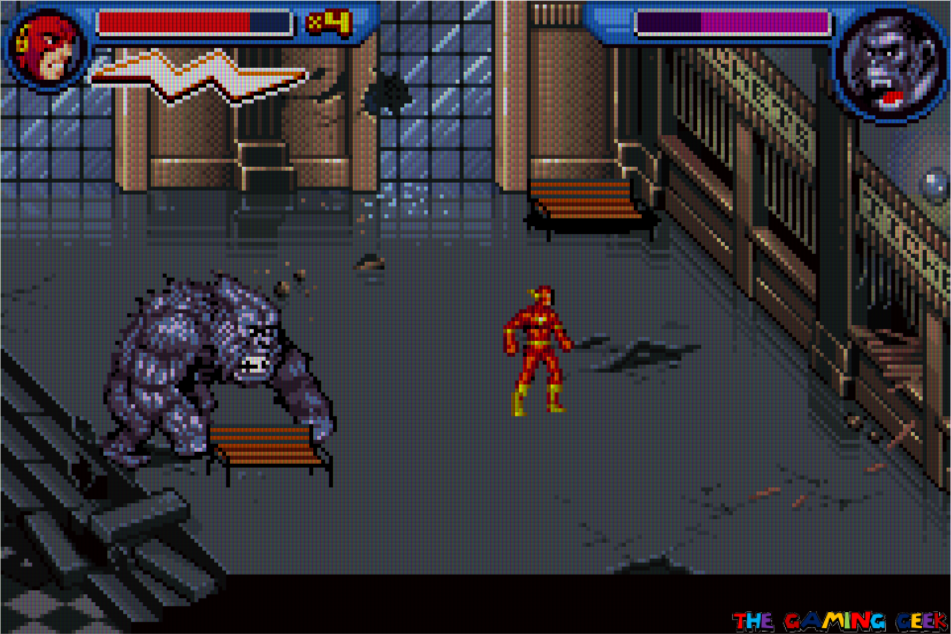 Each boss has a decent array of moves that will really keep you on your toes. Gorilla Grodd will charge at you, throw benches at you, and even climb up the wall and throw stuff at you. Killer Frost has several different ice attacks, including one that traps Flash while in mid-dash. Circe uses a wide variety of magical attacks, including summoning some ancient warriors. 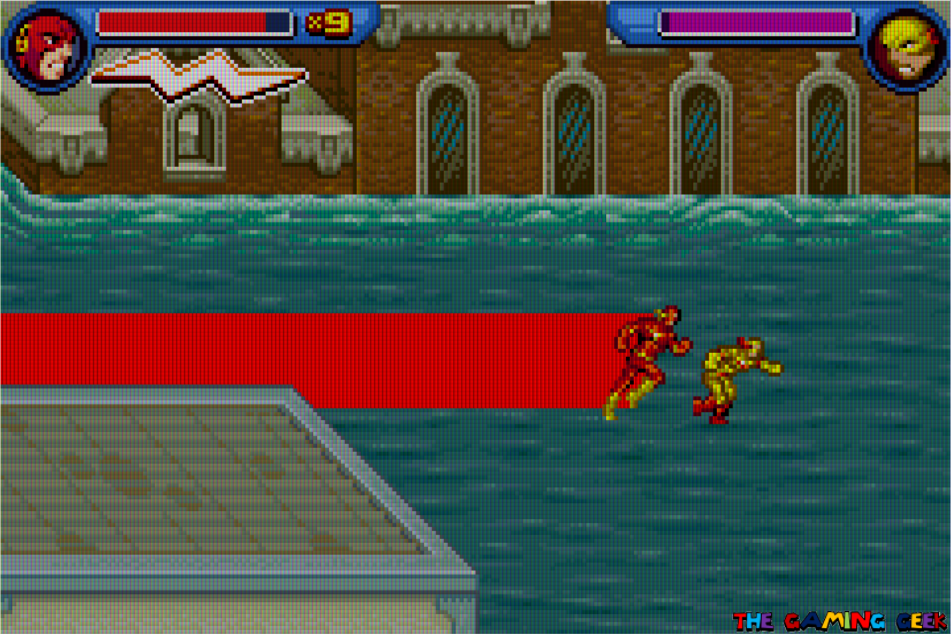 Before you fight Zoom, you have to race against him first.

By far, my favorite battle is against Zoom. Another speedster, before you face him in battle, you have to go through a pair of chase sequences first. In these, both the Flash and Zoom are running at full speed, and you have to dodge obstacles in order to keep pace. It’s an amazing sequence that is really true to this superhero. 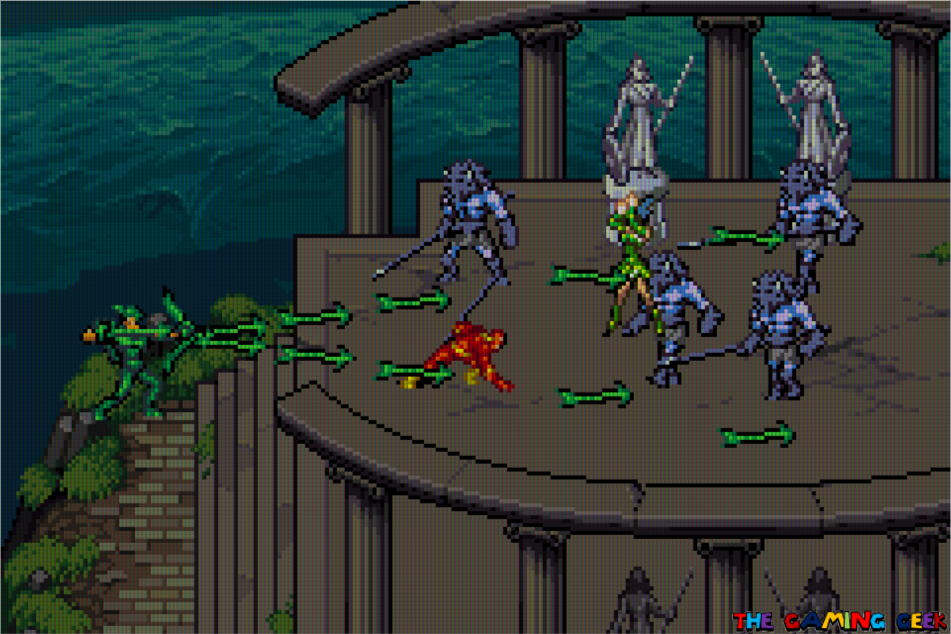 Circle has a bunch of warriors at her side, but Green Arrow will tilt the scales back towards The Flash.

I’ve been raving about the game’s excellent boss battles, and you can easily replay them via the Boss Rush mode! In this mode, you’ll fight each boss one after the other! A great way to experience being the Flash without having to go through all of the game’s stages! 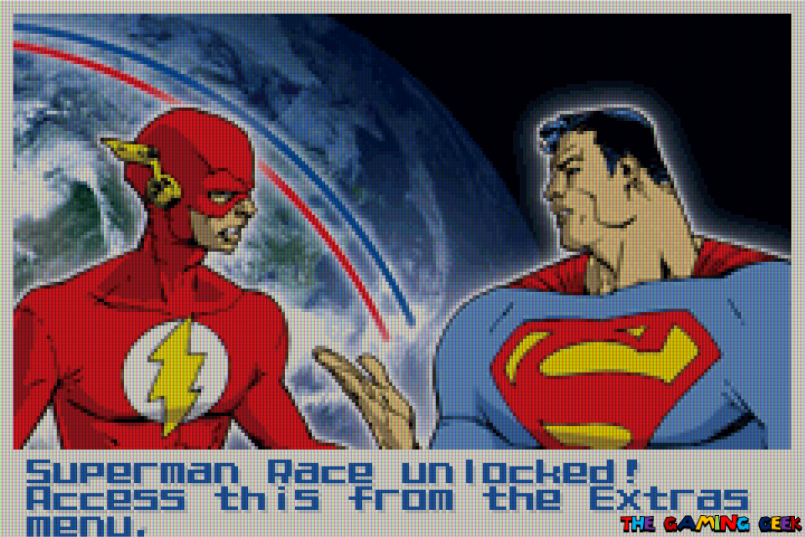 Who is the fastest man alive? The Superman Race will settle it!

I was really impressed with the graphics of Justice League Heroes: The Flash. Despite using small sprites, they’re all quite detailed and have good animations. And because the sprites are small, you have a wide view of the game’s stages. Speaking of which, the game’s stages are also really nice to look at. Because of the storyline, you get to visit different locations of the DC Universe, including Metropolis and Themiscyra. 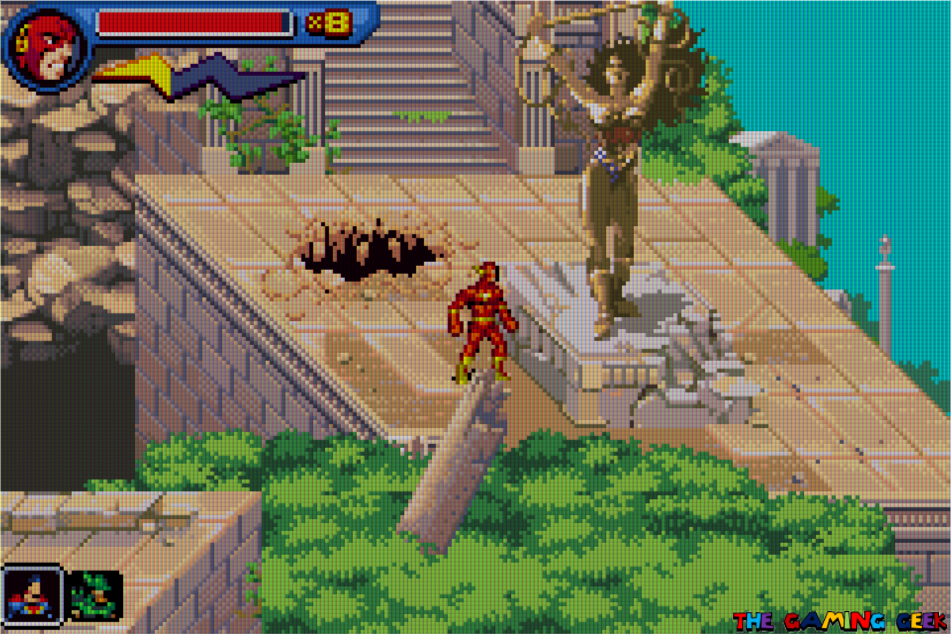 There’s a statue of Wonder Woman in the Themiscyra levels.

Unfortunately, I wasn’t quite impressed with this game’s music. They’re all okay, but not very memorable. What saves this game for me in terms of sound are Flash’s voice clips. It’s always fun to channel the Speed Force because he’ll always say “Fastest Man Alive!” when you do it. Whenever he respawns, he’ll call out “Unstoppable!”, and he’ll say “Cool!” whenever you pick up power ups. When you run out of energy, The Flash will utter “Uh-oh!” audibly. 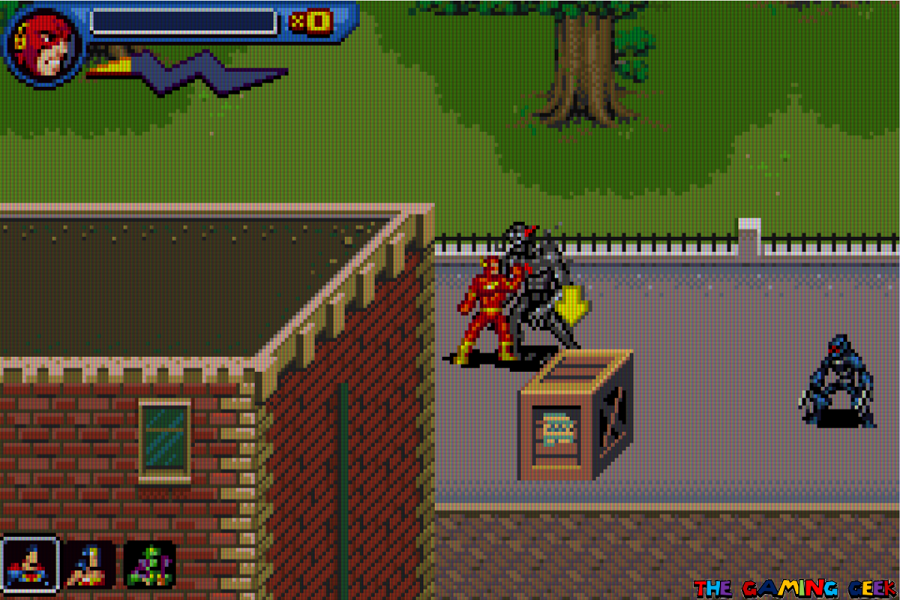 When it comes to presentation, everything is impressive again. Cutscenes use static illustrations, but each character has several of them, so they always match what the dialogue is trying to say. Character icons are easily recognizable in the HUD. Fonts are readable and the menu is easy to navigate. I don’t know if this fits in presentation, but this one is definitely a plus when it comes to flavor. If you try to access the Speed Force (press R) just before you collapse at 0 lives and health, the Black Flash will appear. Beat him and you won’t go into the Game Over screen! It’s a small Easter Egg that is also a neat gameplay mechanic!

I’m glad I played Justice League Heroes: The Flash again because it is as fun as I remembered it to be. It’s got really good graphics that has aged really well, and the gameplay captures the feel and essence of the Flash. It is so fun to zip to one enemy after another. And fighting all of these bosses was an amazing experience. The hit detection issue was annoying, but you’ll eventually learn to play around it. And when you’re done, you’ll get neat additional gameplay modes that you can keep going back to!

My final complaint about this game is that it doesn’t have an end to its story. This game will explicitly tell you to go play the main Justice League Heroes game to see how this all ends. So after you play this, you might get a little disappointed that there’s no real pay-off. But honestly, you won’t need the pay-off because just playing this game is already quite entertaining. I highly recommend this to anyone who wants to play some GBA games, even if you’re not a DC fan.