Superhero video games usually feature Spider-Man, Batman, or the X-Men, so when I saw that there was a Ghost Rider video game on the Game Boy Advance, I was quite interested. Sure, this game is based on the terrible movie of the same name, but if there’s something that I learned from the Catwoman GBA game, it’s that a video game can be miles better than its source materlal. 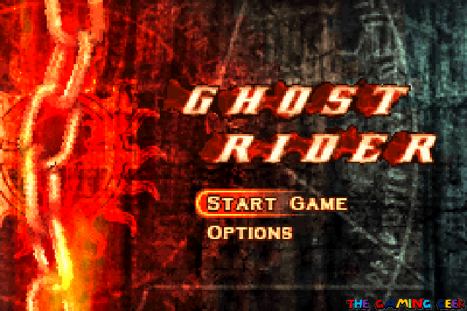 Title screen for Ghost Rider for the Game Boy Advance.

Let’s talk about my experience with the game today.

Ghost Rider is an action platformer game developed by Magic Pockets and published by 2K Games for the Game Boy Advance. However, this game is actually 55% platforming and 45% motorcycling. I don’t remember the film much, but I think the game follows the film’s basic plot but changes several details. In the game, Mephisto is still manipulating Ghost Rider into doing his bidding by asking him to chase after some renegade demons.

You’ve got a health meter and a magic meter. You can also get experience points which you can use to upgrade your moves, attacks, and stats. When defeating enemies or destroying objects, you can get these spirit orbs of different colors and sizes. The orange orb replenishes your health meter and the blue orb replenishes your magic. Meanwhile, the purple orbs give you experience points. 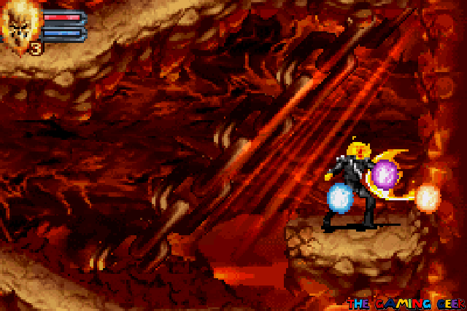 Collect as many of these orbs as you can.

You’ve got three lives in this game and no continues. When you lose all three lives, it’s Game Over. But the game has a save system so you can technically continue from the beginning of the stage that you died in. There are three save slots that you can use. Finally, the game has difficulty options. at the beginning, you can choose between Angelic (seems to be Easy) and Human (probably Normal). Demonic difficulty will only be unlocked when you beat the game.

I started a new game in Demonic difficulty and I was surprised to see all the sections already unlocked. The platforming stages have all changed and each section now has a completion %, which tracks how many orbs you’ve collected that were available in the stage. Beating the game with 100% on all sections unlocks an Extra option. I don’t think I’ll even bother unlocking it though.

Ghost Rider can do a lot during the platforming stages. He can’t do all his moves at the start though; some of them are unlocked once you get to specific points in the game. From the start, he can walk and crouch using the D-Pad. He can jump but this is mapped to the R button. If you press the jump button while crouching, he’s going to roll. Later on, he’ll learn how to do a short dash and a sliding kick. 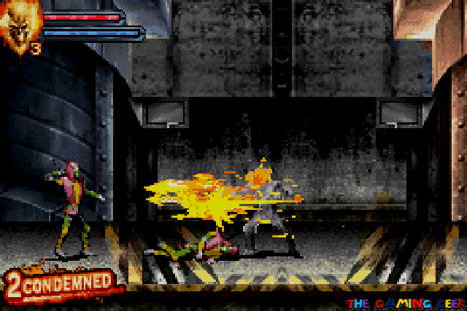 There’s a reason why jumping was mapped to R. B  is used for punching attacks, and our hero has several kinds. You can tap it several times for a combination or press back for a backhand attack behind you. He can also learn other punch attacks as the game progresses. 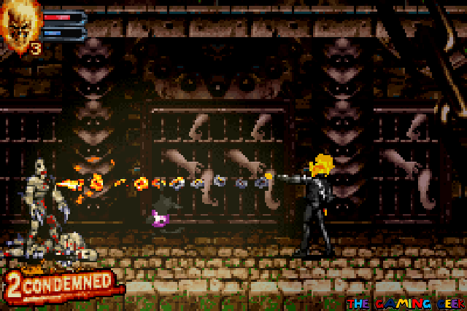 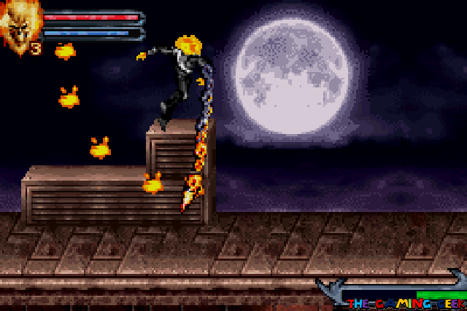 You’ll learn the ability to grab onto enemies with the chain and pull them towards you. My favorite learned move is simply pressing A in the air, which makes you sweep the chain in a circular motion. You’ll need to use this against airborne enemies and several bosses. 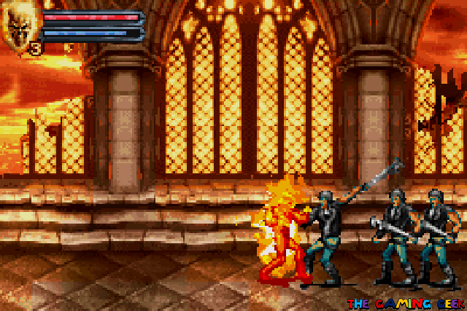 There are more moves that  I personally didn’t use. Some include different grab attacks and other attack variations. The most notable move that you might consider using is the Thirst of Vengeance which powers Ghost Rider up but slowly drains the magic meter. In this mode, you can use his famed Penance Stare, which is an instant kill grab move.

After each platforming stage is a motorcycling section that plays quite similarly to classic Road Rash games. The R button starts you off, and you also use it to accelerate. Left and right steers the motorcycle, and the L button brakes. You won’t do a complete stop though, so the L button just slows you down a bit. 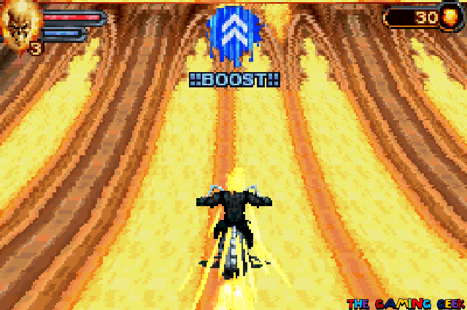 More often than not, you’ll encounter obstacles in your path. Hitting them breaks your combo and damages you, so you’ll need to avoid them. Some of them will block entire sections of the path, so you’ll need to check if there’s an opening underneath that you can slide through. Pressing Down does a powerslide that you can use for that. 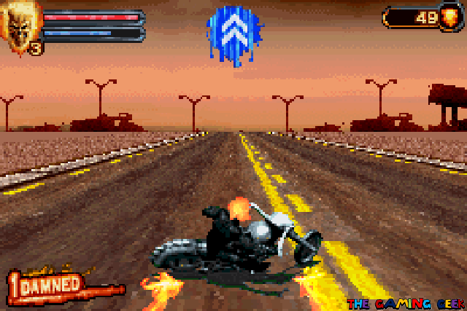 When you powerslide, make sure you’re clear of obstacles to your left and right.

You still have to worry about enemies in these sections. You can use chain attacks whenever an enemy happens to be beside you. This time, pressing B does a chain attack. The chain still has a long reach, so you can be one motorcycle away from an enemy and still be able to hit them. 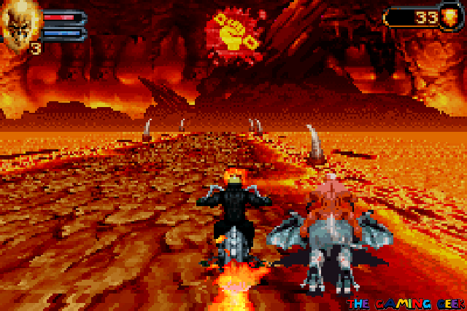 Attack enemies riding beside you with the chain!

You can also attack enemies in front of you by pressing A, which shoots out a fireball. These are limited, and you’ll see how many you have remaining at the upper right corner of the screen. Usually, you’ll get more fireballs when you defeat enemies. There are some sections that have power ups that will also give you more fireballs. There are some sections though where you can also easily run out of these. You’ll need to get a feel of the stage that you’re in to see if you need to conserve these or not. 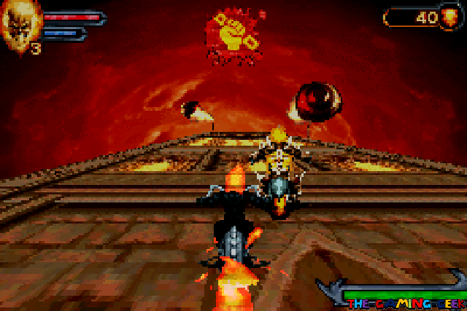 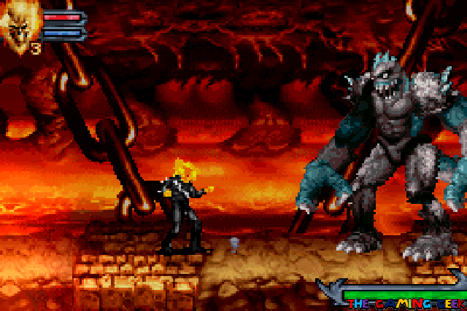 You’ll face several of these golem-like monsters in the game.

The lack of enemy variety doesn’t help. Sure, some of them look different but they behave the same way. At a certain point in the game, it’ll feel like you’re fighting the same enemies over and over. Especially these giant golems which you’ll face several times. There are a few other giant enemies (including a boss) that look different but have similar moves. 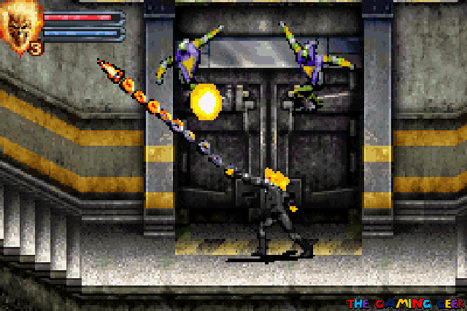 You’ll face a lot of these flying enemies which look exactly the same save for their colors.

Add repetitive level design except for the change in visuals when you get to a new chapter to a lack of enemy variety and you get a game that overstays its welcome. A few more different enemy types could have prevented this.

I actually like the graphics of Ghost Rider a lot. Sprites are quite detailed and well-animated, especially Ghost Rider himself. But the stages have a lot of detail in them. There are quite a few that even use parallax scrolling backgrounds. The locations that these stages are representing really do look like those locations. 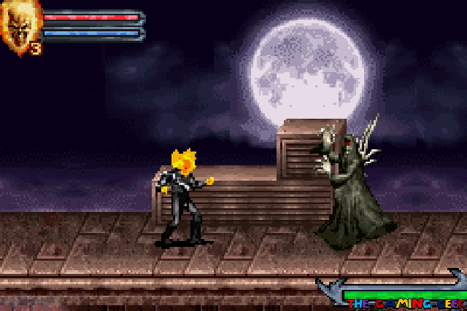 The moon shines in the background as you fight against Abigore.

In terms of sound design, the same issue of repetitiveness persists in the music. Aside from only having a few stage tracks, they’re too short so they start looping after a few moments. Sound effects are fine though. I just ended up tuning the music out of my head as I played more and more of this game. 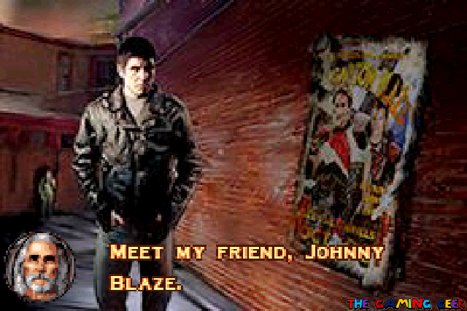 The game’s cutscenes make use of beautiful art.

As for the presentation, I’m glad to say that I loved how polished this game is. Fonts are quite readable, and the move lists are all clear and easy to understand. You see a Ghost Rider flaming head just beside the health and magic meters. And the beginning of each section even has a short title that tells you where you are at that point. 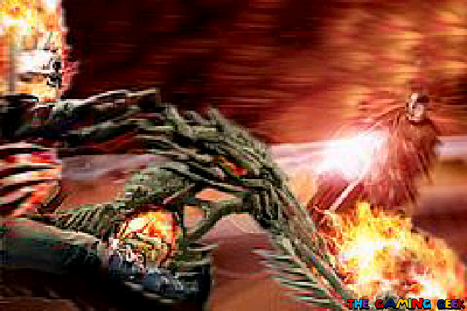 The highlight, however, are all the gorgeous art that they used for the game’s static cutscenes. They’re all just beautiful to look at. The developers weren’t able to use the likenesses of the actors in the movie though. With any other film, I would see that as a negative. But this actually helps distance the game from the film, so let’s call that a win.

Ghost Rider for the Game Boy Advance is a decent game. It looks really good and if you can get used to pressing the R button to jump, it also plays well. But after some time, the repetitiveness of the level design and the enemies start to get boring. I didn’t have to drag myself to the end, but I also limited myself to short bursts of play. I’d imagine that some fatigue would start to set if I played this game for longer than an hour.

If you’re a Ghost Rider fan, you should go ahead and get this. Video games featuring these characters don’t get made often. And this game does have some enjoyment in it. Other than that, I don’t see any good reason for anyone to play this game. There are certainly a lot better games on the Game Boy Advance in terms of action platformers and superhero games.