I’ve been wanting to play Daredevil since I learned there was one on the Game Boy Advance, but I had to save it for another time. In my mind, Daredevil was a character who can be adapted well into a video game. He does a lot of hand to hand fighting like Batman or Spider-Man, and his enhanced senses can be used for interesting game mechanics. 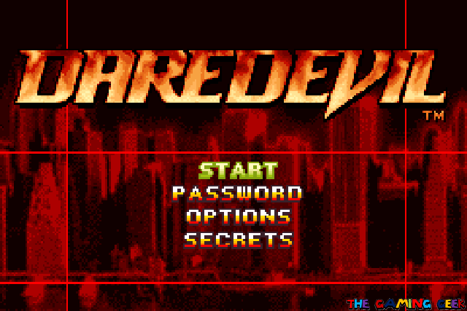 Title screen for Daredevil on the Game Boy Advance.

Well, I finally had my chance to play it. Let’s talk about this game today!

Daredevil is an action platformer developed by Griptonite Games and published by THQ and Bam! Entertainment. It is a tie-in to the 2003 Daredevil film, so it uses character designs from that movie. Strangely, the game’s plot is completely different from the source. Here, the Kingpin is framing our hero by releasing false information to the media that he is paying Daredevil to take down other criminals. You’ll step in the shoes of Daredevil as he attempts to clear his name. 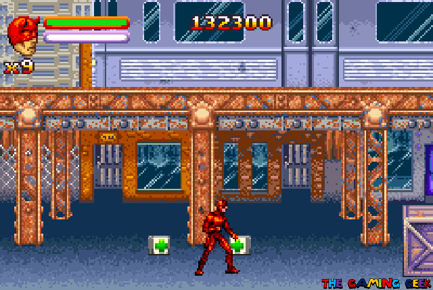 The game has a single player mode and a password system. It doesn’t have any difficulty options. You start the game with three lives and there are plenty of extra lives scattered across the game’s stages. You’ve got a health meter and when it is completely depleted, you lose a life. However, there are plenty of health refills in the game. Aside from those that you’ll find in the game’s stages, normal enemies drop these quite frequently too.

A DD icon and the Billy Club power up.

Finally, the game has a bunch of unlockable bonuses which mostly consist of stills from the Daredevil movie or original comic book art. Most of these can be unlocked by beating the boss characters, or finding all of the DD icons in each of the stages.

You can unlock the comic book versions of Elektra, Bullseye and Kingpin.

The most interesting of these unlockable bonuses is the Level Select feature, and the ability to change the characters of Elektra, Bullseye, and the Kingpin into their comic book versions. You can even unlock Daredevil’s original red and yellow costume too! The Level Select feature will let you go directly to the boss battles so you can immediately see these versions as soon as you unlock them.

In terms of movement, our hero can walk/run, crouch, and jump. He can crawl too, unlike Metroid. He’s got a double jump which works at any point of the jump, but is best done at the very peak if you want to reach as high as you can. He can also climb up and down ladders. 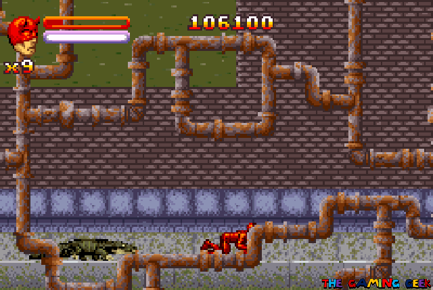 Yes, that’s an alligator chasing after our hero. In the sewers.

In terms of attacks, he can punch while standing. Tapping the attack button does a three hit combo that ends in an uppercut. This move can knock enemies down, including some of the boss characters. He’s got a crouching kick and flying kicks too. 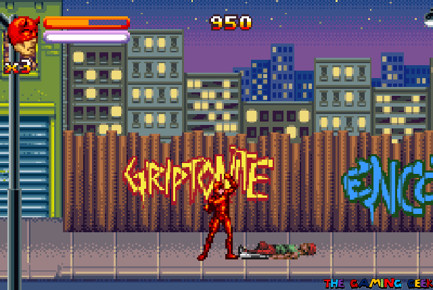 He can also use his billy club to attack. By default, he uses this as a melee weapon. But if you can find the Billy Club power up, he can start throwing this as a projectile attack, which is handy against enemies with fire arms. This isn’t infinite though, and unfortunately, there are no visual indicators as to how many projectile attacks you have remaining. Projectile attacks are helpful, but aren’t necessary. I was able to beat the game with minimal use of this. 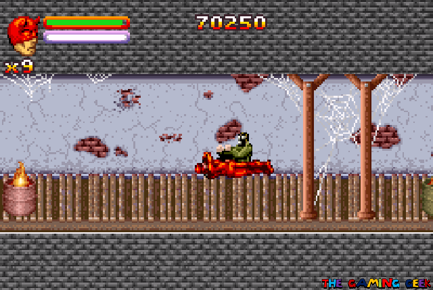 The spinning corkscrew kick is the most important attack in this game.

Daredevil’s most important attack in this game is his spinning corkscrew kick. And I can actually remember him doing this in the 2003 film. The most reliable method that I follow is to move the opposite direction first, then quickly move forward again right before attacking. This move can knock down enemies, has a hitbox that stays for a longer time, and does a lot of damage. It is better to use this move against normal enemies than all the other attacks.

I was excited to see how the developers would implement Daredevil’s famous radar sense. And here’s how they made it work. Pressing a button turns the radar sense on, which turns the colors of the game into black and white. And enemies will start looking like they’ve being viewed in a thermal scanner.

The main use of this move is to reveal invisible power ups. You can only get these if you’ve got radar sense turned on. So even if you’ve already seen where one of these power ups are and try to go to it’s spot, you won’t be able to get it if the radar sense is off.

The game will tell you if you’re near an invisible power up. So, as long as you’re exploring every explorable nook and cranny of each stage, you won’t miss any of them. And that’s really the only thing that the radar sense is good for. Which is funny because throughout the game, you’ll come across these breakable boxes. Sometimes, these boxes will contain hidden enemies. The radar sense doesn’t reveal them at all.

When Daredevil’s head starts giving out signals, it’s time for your radar sense.

There’s also one stage with a fake wall that’s hiding a DD icon. I almost didn’t find the DD icon. The radar sense should’ve revealed this to me, since it should be able to see through holograms and illusions. So I thought the radar sense wasn’t utilized well.

The game could have been designed better around the radar sense. Such as introducing enemies with weak points that only the radar sense can reveal. Or have stages with more fake walls that are hiding more areas to explore. There are a few things that could’ve been done to take advantage of this signature power.

The premise that the Kingpin is framing Daredevil worked in a way that it pitted our hero against several different characters. So you’ll face famous villains like Elektra, Kirigi of the Hand, Echo, and Bullseye in this game. They even managed to include a deep cut character like the Sewer King.

The battles with Elektra and Kirigi.

Unfortunately, that’s the best thing I can say about these boss fights. Most of the bosses were quite easy to beat and didn’t offer any memorable mechanics, except the fight with Echo. The battle with her takes place on top of a running train. 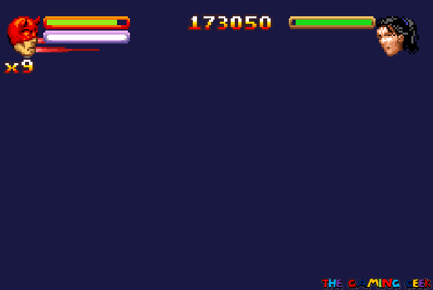 I’d make fun of this but the battle with Echo actually makes sense.

Echo will try to mimic your every move so when you attack her, you risk getting hit by the same exact attack. The key to the battle is to wait for the train to enter a tunnel. When this happens, you can’t see anything. But neither can Echo. Enabling your radar sense will allow you to see through the darkness, and that’s when you can attack her. There’s the small detail of Echo trying to attack you in the dark, blindly. It’s funny, and I wish the game had implemented more ideas like this.

I found the graphics of Daredevil to be adequate. I’m very happy that the developers used traditional pixel art instead of the faux 3D that was popular during the early days of the Game Boy Advance. Character sprites are quite detailed for the most part. I only have one complaint when it comes to the enemy animations. 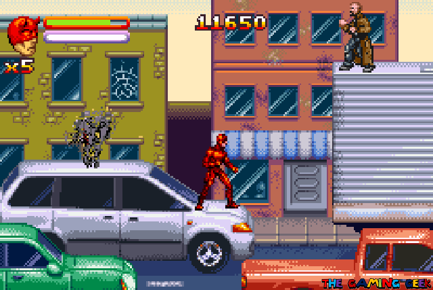 Stage 1 has a section where you need to hop from one vehicle to another.

Regular enemies actually block attacks after they’ve been knocked down, but it’s not clear visually. So I had a bit of trouble with the combat of this game early on. I couldn’t time my follow up attacks properly. Either I’d attack too early and get blocked, or the enemy would be able to attack me first. I never really figured this out, to be honest. I just worked around it by using the corkscrew attack more. 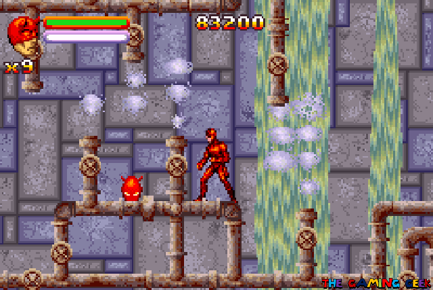 An extra life in one of the sewer sections.

Stages are quite colorful and have detailed backgrounds and foregrounds. They represent different areas of Hell’s Kitchen and New York well. My complaint about stages not really changing in appearance is still true here, but it’s less pronounced since sections are shorter. And the next section would look much different than the previous one, so I do get the sense of movement.

Meanwhile, the music and sounds of the game both do their job well. The music is nice to listen to while playing, but none were memorable enough for me to want to listen to them again.

The game’s presentation is a mixed bag. I always love it when a superhero game references comic books, so seeing this game make use of word balloons for it’s cutscenes was nice. I would have preferred the use of comic book illustrations for the cutscenes, but using in-game graphics worked well enough.

I understand the developers wanting to reference the Daredevil film as much as possible, but the Game Boy Advance isn’t really powerful enough for it. So all the movie stills included just looked spotty and pixelated. 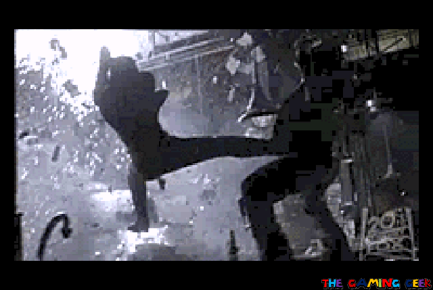 One of the many still images from the movie that are included in this game.

There is one other thing that stands out to me about this game. It happens too often and it’s really glaring, so I can’t help but talk about it. Whenever you beat a boss, the characters freeze and you get this pixel art background of an explosion. 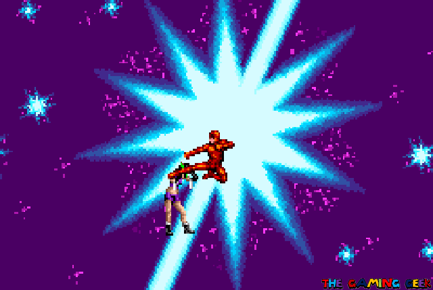 This is what happens when you beat a boss.

This explosion is static. It has no movement or animation whatsoever. But this background will spin around. It feels like such a cheap visual effect, the kind you expect to see from school film-making projects. Simple screen flickering, or blacking the background out, would have worked better than this. It doesn’t break the game but like I said, it happens after beating every single boss, so it became memorable in a bad way.

I wanted to like Daredevil, and then I wanted to hate it. But objectively, it’s a mediocre game. Everything works as intended, although the combat can be clunky because enemy blocking isn’t telegraphed properly. The stage design is decent, but unremarkable. And Daredevil’s radar sense could have made for unique gameplay mechanics, but the developers weren’t able to take full advantage.

But it’s not a broken game at all. It’s perfectly playable and offers a moderate challenge. There are better games to spend your time on, but spending your time on this isn’t a complete waste. If you’re a hardcore Daredevil fan, well, this is the only video game based on the character. Give this game a try, or play other games where he’s a guest star (like Marvel Ultimate Alliance 3 on the Switch).