The 2004 Catwoman film was a major failure for Warner Bros. both commercially and critically. It only earned $82 million dollars worldwide and only scored 9% on Rotten Tomatoes. It was so bad, the film and it’s lead actress both won the Golden Raspberry Awards for Worst Picture and Worst Actress. I’m sure the decision to release video game tie-ins was made way before the film was even screened, so I won’t bother asking why anyone thought that publishing Catwoman video games were such a good idea. But are the video games as terrible as the film? 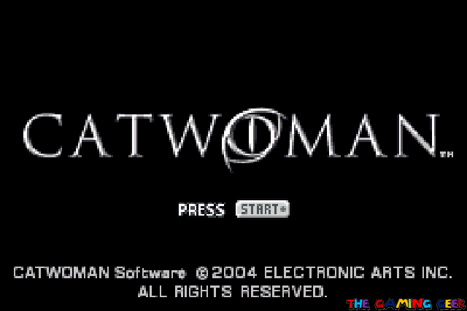 Title screen for Catwoman for the Game Boy Advance.

I decided to give the Game Boy Advance version of Catwoman a chance and played it until the end. Let me talk about my experience with the game.

Catwoman is an action game that is based on the aforementioned movie. The Game Boy Advance version was developed by Magic Pockets and published by Electronic Arts. In case you aren’t familiar with the movie, let me educate you. This isn’t based on the popular Batman villain but rather, the idea of a “cat-woman”. 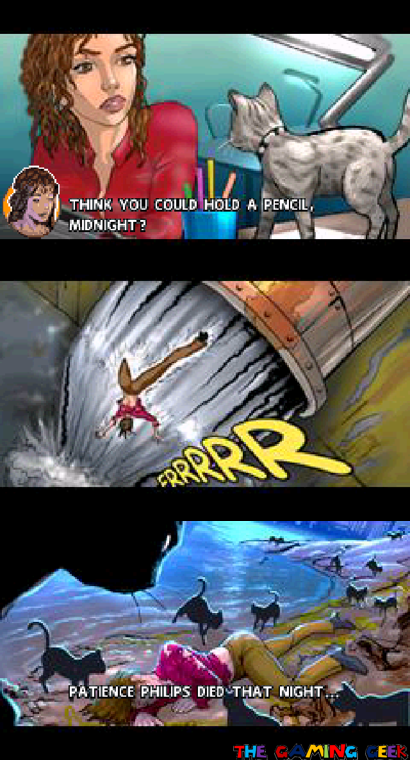 The main heroine, Patience Phillips, is killed. She is resurrected by an Egyptian Mau cat. She learns later on that these cats act as messengers of the Egyptian deity known as Bast. Apparently, Patience has now become one of Bast’s exemplars, and she gains superhuman powers as a result. With her new abilities, she starts investigating why she was killed. This game follows the movie plot quite closely, based on it’s Wikipedia synopsis (no, I’m not going to watch the movie myself).

This is the first superhero game that I’ve come across that uses an isometric perspective, wherein the game is viewed from a top-down perspective at an angle. This leads to my first issue about the game. The Game Boy Advance uses a traditional D-Pad, so it takes a while to get used to how movement translates to what you see on screen. There’s quite a bit of jumping in this game, and the relationship between the standard cross D-Pad and the perspective has resulted in quite a lot of misjudged jumps in my playthrough. 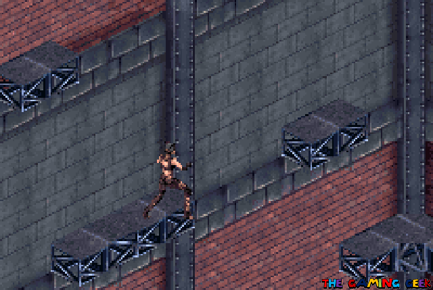 You’ll need to translate the D-Pad motions into diagonals.

You’ve got a health meter in the game and when it is depleted, you die. You don’t have a lives count but the game has a save system and there are a lot of checkpoints. You also have four save slots. The game doesn’t have any difficulty options or additional game modes though.

Despite using an isometric perspective, Catwoman has a lot of jumping and platforming. She’s got this high arcing jump that ends in a diving motion. This makes it difficult to judge where she’s going to land when you first start playing the game. I got used to it soon enough, but there are some areas later in the game that I had to repeat several times because I kept missing my landings.

Aside from jumping, she’s got two other moves that actually made the platforming entertaining for me. The first one has her running against a wall, which will let you cross large gaps. You can even jump near the end of her wall run to cover a greater distance. 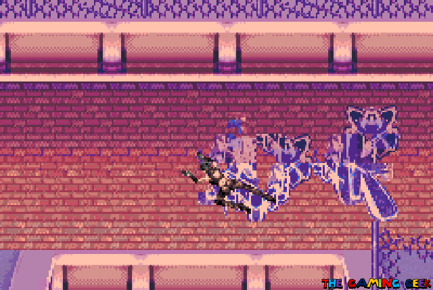 You can run up against walls in order to cross gaps that are too wide to jump over.

Throughout the game’s levels, you’ll come across several horizontal bars/poles. Catwoman can swing on them and gain momentum for jumping. She can do a full 360 degree spin to help her “jump” farther, or jump straight up. 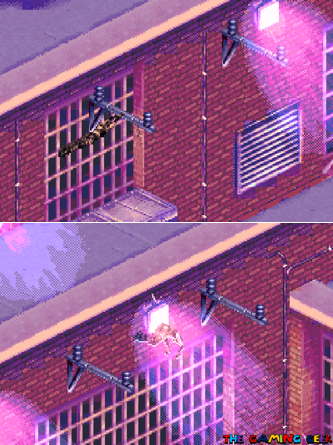 You can swing across bars to cross large gaps.

These two abilities, combined with good level design, actually made Catwoman feel like an athletic character. The platforming and traversing aspect of the game is what I enjoyed the most during my playthrough.

Unfortunately, the battle mechanics of this game aren’t satisfying enough. Catwoman has different spinning kicks as attacks, and tapping the attack button let’s her flow into these kicks. It looks good, but in practice you’re really just mashing the attack button. You’ll beat 95% of the enemies, and all of the game’s bosses, in this way. 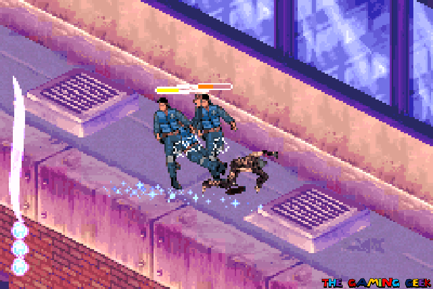 Your main method of attacking is through spin kicks.

When there are no enemies in your immediate vicinity, pressing the attack button will make her crack her whip. This is a midrange attack that does weak damage but can stun enemies. Some enemies are armed with guns, and whipping them can stop them from firing at you. You can also use your whip to grab and toss nearby objects and “throw” them into enemies. Unfortunately, sometimes the game will prioritize whipping objects instead of kicking nearby enemies, which can leave you vulnerable. 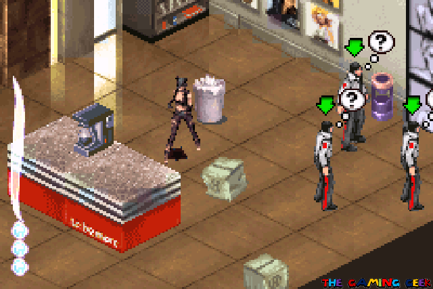 Later on, you’ll be able to tether your whip to your enemies so you can pull them towards you. You can also pull away any guns they’re holding. And much later on, you’ll learn a somersault kick that you can execute after pulling an enemy closer. 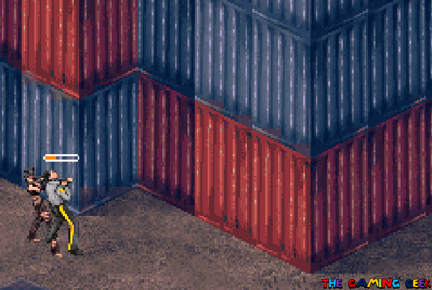 You can take out an enemy quickly if you use the stealth attack.

She can also crouch behind objects and avoid getting seen. You can then sneak up behind enemies and take them by surprise. Initially, you’re limited to your normal attacks but you’ll learn how to choke them out as you get farther in the game.

I was quite impressed with Catwoman’s graphics. Catwoman has a detailed sprite that looks like her movie counterpart. All of her actions are clearly depicted and well animated, from her crawling across the floor, to grabbing poles and spinning around them. I hated how she jumps because of it’s impact to gameplay but strictly from a visual perspective, I was impressed at how the developers were able to recreate her tendency to land on her hands. 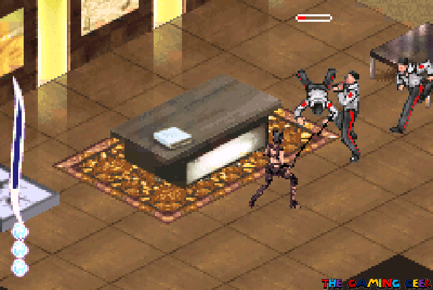 Enemies will visibly struggle when you do the tether pull move.

Stages are also quite detailed, and the game takes you to a lot of different locations. You’ll go to places like warehouses, science labs, office buildings, and even a nightclub. The enemies are also quite detailed but, because of the source material, there’s not a lot of variety. You’ll end up fighting guards and law enforcement in different uniforms, and that’s about it.

The sounds and music of the game are also quite good. It was so adorable to hear Catwoman utter a “meow” every now and then after taking out an enemy. She doesn’t do it every time, so when she does it, I end up with a smile on my face. The game has good stage music, but there’s so few of them so it ends up being repetitive near the end. 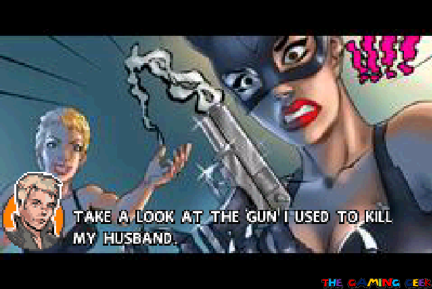 You’ll get a good amount of illustrated cutscenes in this game.

In terms of presentation, this game also shows how polished it is. You get a rough animation of Catwoman at the start of the game, which isn’t really that notable, actually. But the game has a good balance of using illustrations and in-game graphics for it’s cutscenes. And the art in these illustrations is actually quite good.

Despite the good production values and entertaining platforming challenges, I ended up getting bored with Catwoman. Normal enemies behave too similarly with each other. Even the bosses are just regular enemies with more health. So the battles feel so repetitive. The bosses themselves are characters from the movie, and not from the comic books, so I couldn’t find any entertainment value in the boss battles either.

I did have fun with the game, particularly in approaching all the stage challenges (you’ll also need to avoid laser obstacles too) but these are sandwiched between sections that I had to drag myself through. The ending also happens abruptly, so I didn’t feel much of a pay-off when I finally beat the game.

Catwoman is a flawed but decent game. But who do I recommend this game to? It has nothing to do with Batman and/or the real Catwoman, so Batman fans wouldn’t be interested in this game. I highly doubt that the film has any fans, given how bad it was. Maybe fans of Halle Berry who also enjoy playing video games? This game isn’t bad, but there are a lot of better video games that you can spend your time on.