I was excited to play Batman: Vengeance. This game is based on the DC Animated Universe version of Batman, and the games that are similarly based on this property are usually good. This is the first Batman title for the Game Boy Advance, so I was expecting something as good as, or better than, what I played on the Super Nintendo. Did the game meet my expectations? Let’s get into it.

Batman: Vengeance is an action game developed and published by Ubisoft. They also developed versions for the Playstation 2, Gamecube, and Xbox. These games are based on the New Batman Adventures of the DCAU. The Game Boy Advance version actually uses different game genres all throughout.

Most of the game’s stages are action platformers that feature Batman. You get to play as Robin in overhead style action stages. The game also features levels wherein you can drive the Batmobile or fly in the Batwing. There are two modes of play: Story Mode, and Advance Mode. You can only play Advance Mode once you have the required passwords, so I’ll get into that later. Story Mode is the traditional single player experience where you go through the game’s levels in order. In between levels, the game has cutscenes that explain where you are in the game’s plot.

Except in the Batmobile levels, you have a health bar that depletes each time you take damage. If you run out of health or fall into a pit, you die. You don’t have any extra lives in this game, so dying means it’s Game Over. However, continues are unlimited and in most levels there are check points, so you don’t always have to repeat the entire level. The game also has a Password system so it’s easy to pick up from where you left off.

Advance Mode features slightly different versions of most of the game’s stages. There’s no story, and each level has a time limit. You need to get to the end of the level within the time limit. You also need to find three discs that are hidden throughout the levels.

The main and most frequent gameplay style of Batman: Vengeance is platforming, and in these levels you take control of Batman. He can run, jump, crouch, and grab ledges. His attacks involve the usual punches and kicks, the strongest of which is a flying kick. In this game, he can do a cape glide, which lets him jump further. 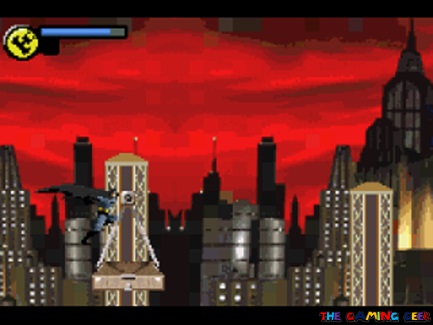 He’s brought along some gadgets as well, which you can cycle through by pressing the L button. These include his trademark Batarangs, smoke bombs, health sprays, and grappling hook. You start each level with five Batarangs and can carry a max of nine. These are thrown forward and don’t come back like normal boomerangs. Throughout levels, you can sometimes find Batarang power ups hidden in barrels which give you five. 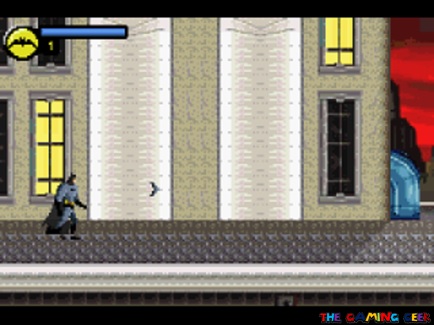 You start levels with one smoke bomb and three health sprays. Smoke bombs are thrown in an arc. They are effective, as one can completely knock out regular enemies. These are quite limited in number and you need to master their trajectory in order to use them effectively. You can also find these hidden in barrels, but are not as common as Batarangs. Each health spray completely replenishes your Health meter. However, I’ve never found health sprays in any of the levels so I think you’re really limited to your starting three.

You have unlimited use of Batman’s grappling hook. But this gadget only works in specific places. The game will usually display the grappling hook icon on the lower right if you’re standing in a spot where you can use this gadget. This will allow you to reach high areas and is a required tool in exploring Batman’s levels.

Robin’s levels have an overhead view. There are no pits, jumping, crouching, or platforming in his levels. His missions are infiltration missions, and his levels are designed like mazes. Some sections involve moving boxes in the right way and order to unblock Robin’s path.

Sometimes, you’ll encounter laser fences that can only be disabled by key cards or special codes. Key cards are usually hidden somewhere else in the level. The special codes can only be obtained by using a special remote control car called the Batcrawler and driving it near a computer terminal. Similar to the grappling hook, you’ll see an indicator when you’re in an area that you can use this gadget.

Using the Batcrawler is a minigame of its own. It constantly drives forward, so you have to react quickly and turn it to the left or right to stop it from crashing into walls or objects. When it does crash into something, it is immediately destroyed and Robin loses some of his health. You can try again, but you may lose health completely if you keep crashing the Batcrawler so you’ll need to be careful. Once you succeed, you’ll get a special four direction code that you’ll need to punch in at a nearby laser grid.

Robin’s stages does have combat. You’ll encounter different kinds of enemies as well. He can attack via punching or via Batarangs. He also starts his levels with three health sprays.

Batman: Vengeance features levels wherein you drive the Batmobile. These driving stages have a topdown view and remind me a lot of the classic Road Fighter games. In all of the Batmobile levels, you need to get to the end before the designated time limit runs out.

You don’t have a health meter in these levels, so there is no immediate worry about crashing into obstacles too much. However, bumping into an obstacle usually slows you down in some way, either causing you to lose speed or come to a full stop altogether. Take too much time, and it’s a guaranteed Game Over because these levels don’t allow you to make up for lost time, like time add-ons.

The Batmobile driving levels can be really frustrating.

I hate these Batmobile stages. They usually take between one to two minutes, and you really have to rely on memorizing as much as you can. Which is hard because you need to be at full speed all the time to make it to the end. I understand the chaos of where inanimate obstacles are placed, but the moving vehicles have no rules to them. I’d at least expect vehicles travelling north to be at one side of the road, and those going the opposite way on the other side.

What I really hate the most is when I know that I already lost too much time, but there’s no quick retry option. I have to wait for the time to run out and continue from the Game Over screen, or quit and have to re-enter the level’s password. This longer iteration period make the Batmobile stages very frustrating. I can foresee this to be a stopping point for gamers who struggle with memorization.

Unlike the Batmobile stages, the Batwing stages are side scrolling shooter levels. You get a health bar and when you take too much damage, the Batwing explodes. There are no health refills or power ups in these levels, so the priority is to avoid damage.

The only tool available is the Batwing’s shields. This covers the entire Batwing and can protect it from projectiles from all sides. However, it will not protect you from buildings and other structures. It also only lasts a few seconds. When you use it, you deplete the shield meter completely. This meter will slowly regenerate, and you can’t use the shield until the meter has been completely filled up.

These stages are pretty straightforward – avoid enemy fire, navigate your way through buildings, and use the shield as needed. If anything, it feels like these stages were shoe horned into the game to add variety.

Because of the different genres in the game, Batman: Vengeance also looks differently depending on what you’re playing. I’m generally fine with graphics of the main Batman and Robin levels, although I think the screen could be zoomed in a bit more since the sprites are kind of small. The sprites are detailed enough to be recognizable, even the boss characters. Backgrounds look really good, so they really look like the locations they’re supposed to represent.

You can tell from the sprites who these bosses are supposed to be.

The game has really good tracks. I especially love the tracks in Robin’s stages. The themes used are a good fit to the theme of the Batman animated series. The sound effects do their job as well.

Can you guess who the boss character is of this level?

The presentation of this game is really good. It uses a lot of static 3D model renditions of the animated characters in delivering the plot of the game. I would have preferred seeing the original art of the animated series, but I’m good with what they did here.

For the most part, I had fun with Batman: Vengeance. I liked the Batman platforming levels and the Robin exploration levels. Although they’re not mind-blowing, I enjoyed playing through those sections. I found the Batwing levels to be a little boring and couldn’t wait to get through those stages.

But man, I hated the Batmobile stages a lot. Those levels almost made me want to give up on this game. Thankfully, once you’ve beaten the game, the Password system will let you revisit the stages that you liked. However, after trying the first stage of Advance Mode, I didn’t think spending more time on this game was worth it.

Would I recommend this game? Well, it’s okay to try it, because it isn’t a bad game. People might find the Batmobile stages a frustrating experience. I just think that, if you want to play a Batman game, there are a lot of better options for you.