As a movie, Batman Begins rejuvenated the Batman film franchise. In my opinion, it deserves as much credit as Iron Man in making superhero films popular. So I was very interested in how a video game based on this movie is going to turn out. I actually own and played a copy of the Gamecube version of Batman Begins but I don’t have it with me. So I queued up the Game Boy Advance version instead. 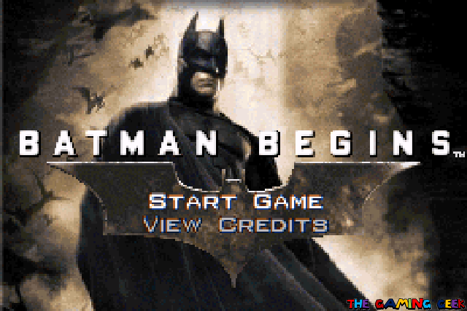 Title screen for Batman Begins on the Game Boy Advance.

Let’s talk about my experience with the handheld version of the game.

Batman Begins for the Game Boy Advance is an action platformer that was developed by Vicarious Visions and published by EA Games. I’ve actually known Vicarious Visions for quite some time now because they developed several games that I liked a lot. They were the studio behind games like Spider-Man: Mysterio’s Menace and X2: Wolverine’s Revenge, so I know that they’re competent developers.

This game follows the events of the aforementioned movie closely, even beginning with Batman’s retreat from the Narrows. You take on the role of Bruce Wayne/Batman as he attempts to defend Gotham City from different criminals and other villains. I was impressed with how this game adhered to the sequence of events in the movie. It’s tutorial stages are based on Bruce Wayne’s training scenes with Ra’s Al Ghul. 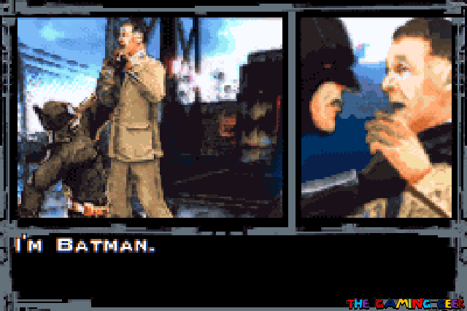 You have a health meter in the game but there aren’t any health refills available. The game is divided into stages and sections, and for the most part you start with full health when you get to a new section. This game follows modern game design in that you don’t have a lives counter. Any time you get killed, you just start over at the beginning of the current section. Finally, the game has a save system which autosaves your progress after each stage. Also, it has three save slots available.

The Batman that we get in Batman Begins is highly capable, thanks to his training. Aside from being able to walk left and right, he can run in this game. He can crouch and he also has a forward roll which makes better sense than crawling. He can jump, and he’s also got a double jump as well as a gliding move. However, moving stealthily is a big part of his assassin training, so he’s also got moves to help him avoid attention. He can move along horizontal pipes and slide down vertical pipes. 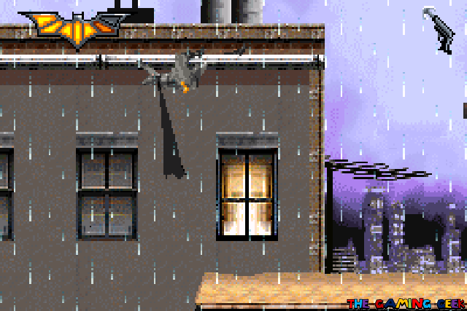 Batman can grab unto pipes with all fours or traverse with just his arms and hands.

He can also grab onto most ledges. When you see a chain or something similar hanging from a ceiling, Batman can usually grab onto it and use it to swing forward to reach another area. Swinging back and forth gains momentum and will let you jump farther. 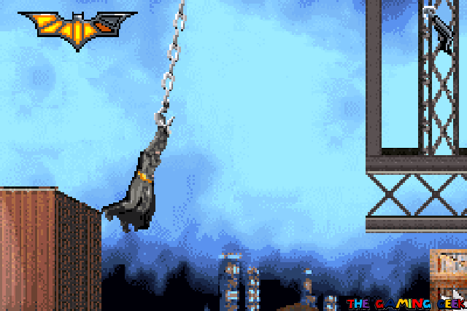 You can use chains to help you across large gaps.

He can also hide in dark areas to avoid detection. You’ll find these spots in the stage backgrounds. Some examples of these areas are empty parking spaces. It might seem cowardly to hide but some of the enemies that you’ll face in this game are quite tough, even for Batman.

Even before his training with Ra’s Al Ghul, Batman in this universe has already had extensive martial arts training, and he shows it through the variety of attacks that he can do. And I have to say, I’m impressed with Vicarious Visions for being able to squeeze as many moves as they can with the Game Boy Advance’s four buttons.

The L button lets you block attacks, but you can only block in front of you. The B button is for attacking. Tapping it several times will do a chain combo of different kicks and punches. Pressing B together with a direction also does different attacks. Doing it with Up does an uppercut, which is strong but a little slow. Down and attack does a sweep kick which is effective against enemies who only attack high. Forward and attack is a lunge, while back and attack does a chop. 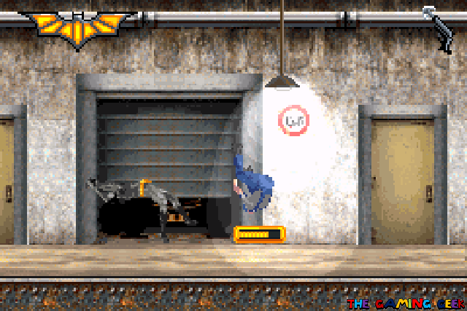 This rolling attack is effective when trying to close the distance between you and your enemy.

Attacking during a run will result in a rolling attack that can knock enemies down. In the air, Batman only has a diving kick attack but it’s highly effective against some enemies. While hanging down from a pipe or chain, you can also do a stomping attack which is very powerful.

Whenever you have the opportunity to do a stomp kick, use it!

While I really like the variety of Batman’s moves in this game and how easy it is to execute each one, I do have issues with the game’s hit detection. When you’re too close to an enemy, your attacks can pass through them. You’ll need to reposition, which makes combat unnecessarily harder.

Batman Begins wouldn’t be a true Batman game if he didn’t have his gadgets, and he’s got five of them in this game. The grappling hook fires straight up, allowing you to reach higher places. You can even use it to avoid getting seen by enemies. You can use this as many times as you want, but it only works if there’s a ceiling within range to latch on to. 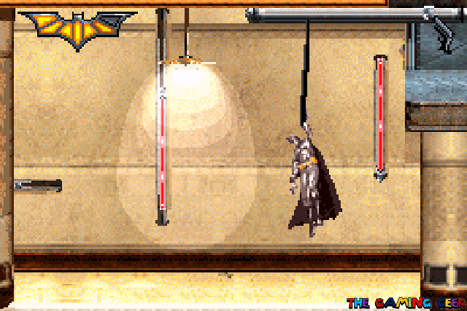 Pull yourself up when you’re feeling down.

Batman’s got an unlimited supply of Batarangs, and he can use these to stun enemies momentarily. He can also flip switches and destroy wooden boxes and damaged doors from a distance with these. It’s just weird how they’re colored gold in this game though. 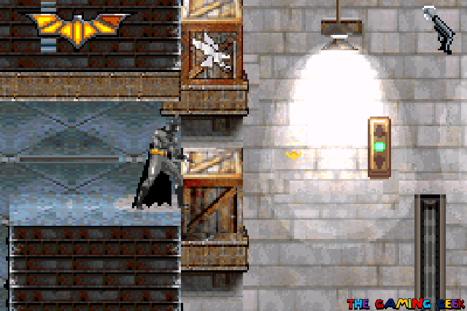 The rest of Batman’s gadgets are single use items that are replenished once you move to the next checkpoint. He’s got one flashbang which stuns enemies on screen momentarily. He’s also got a smoke grenade that creates a hiding spot anywhere you are. To be honest, I didn’t see much use for either gadget. 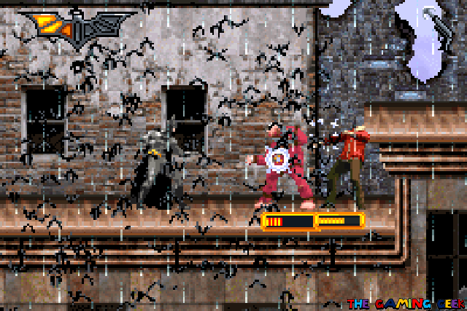 Batman can summon a swarm of bats that will help him out.

What’s really useful is his Bat Swarm gadget. Aside from being a recreation of a really cool scene from the film, this move summons a swarm of bats that can damage enemies in your vicinity for the entire duration of the move. While they’re getting attacked, they’re also getting stunned, so you can wail on them with your own attacks. This move is very effective, even during boss fights.

Another thing that I appreciated in Batman Begins is the variety of enemies in the game. There are four general groups: Ra’s Al Ghul’s Assassins, common thugs and criminals, Gotham City policemen, and Arkham Asylum inmates. The common thugs and criminals are the easiest types. Some of them are armed with baseball bats and guns, but they don’t usually pose a threat if you’re being careful. 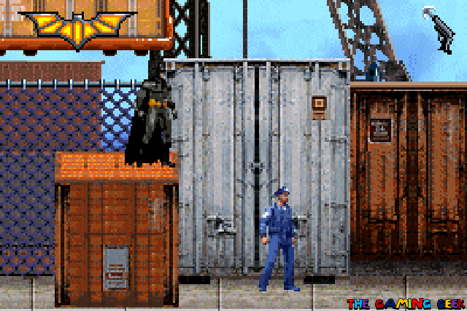 Don’t get seen by the police!

What makes the Gotham City cops is the design behind them. You can’t fight them at all. When they see you, you’re automatically sent to the beginning of the current stage/section. So when they’re involved, all you can do is hide and run. The Assassins and inmates are tough to beat in combat. They’ve got a variety of different attacks including combos, swords, and lunges. 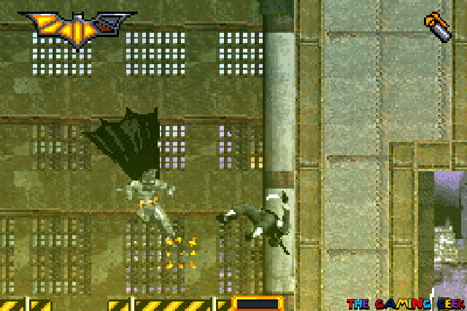 These enemies can really beat you up. Since there aren’t any health refills, you’ll have trouble getting past stages if you keep fighting them. Some stages have alternate paths so you’ll have to choose your battles wisely and avoid these enemies as much as you can.

Batman Begins is the third Vicarious Visions Game Boy Advance game that I’ve played, so I’m getting a little used to the art style that they’re using. The character sprites are detailed, but a little washed out. I think what’s missing is some clear outlines to make them stand out more against the backgrounds. But they are quite detailed. I was able to recognize characters from the film easily, like Dr. Crane and Flass, the corrupt cop. 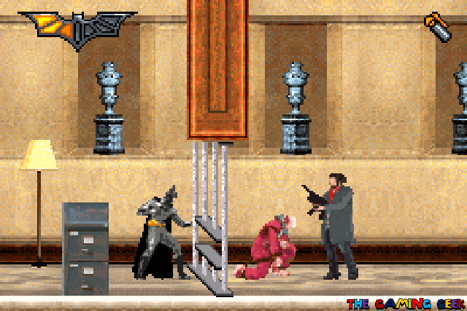 And similar to Vicarious Visions’ other games, I love the visual details and the layouts of their stages. Despite being a platforming game, most of their stages feel like real world locations. And they’re really good representations of the locations that we saw in the film. We get to visit the Narrows, Wayne Manor, Arkham Asylum, different areas of Gotham City, and even one of Gotham’s monorail trains. 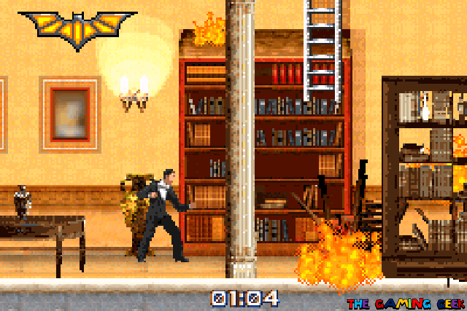 Escaping Wayne Manor as it burns down.

In terms of sound, this game does a great job at invoking the feel and emotion of the movie. There are even some sound clips in the early stages with criminals exclaiming “It’s Batman!” which was really neat. However, Hans Zimmer’s soundtrack is just so deeply ingrained in my head. It’s hard for my ears to accept anything else when it comes to these Batman films. I wish that they also obtained the license to use a few of Zimmer’s tracks, or enough to use tunes that resemble them.

The game uses a lot of static cutscenes to convey it’s story as completely as it can.

As for presentation, this game is quite polished. There are a lot of visual stylistic choices that invoke the feel of the film, such as the frames used in the cutscenes. You even see some nice touches like Batman’s health meter being in the shape of his bat symbol. The developers really made the effort to make this game look good.

The moment I saw Vicarious Visions in the game’s opening credits, I knew that the Game Boy Advance version of Batman Begins was going to be a gem. And it is. The game is a little difficult to beat thanks to some really tough enemies and some hit detection issues when it comes to attacks and ledge grabbing, not to mention the absence of health refills. But having a save system and unlimited lives still makes this game’s difficulty reasonable.

This game stays true to the spirit of the source material. It’s an almost complete re-telling of the film’s plot, if we don’t count the romantic subplot between Bruce Wayne and Rachel Dawes. I was a fan of the Nolan Batman films, so I enjoyed playing this game a lot. I think it’s the best Batman game available on the Game Boy Advance, to be quite frank. It’s definitely worth revisiting today, especially if you’re a Batman fan.