My wife and I both work and on different work schedules. So, we really haven’t had enough time during weekdays to watch a lot. But, during weekends, it’s usually binge watch time for us. When the Covid-19 pandemic hit, binge watching became the most convenient entertainment for us. It helps us relax and recharge for the coming work week. My wife’s movie or series genres preference are first priority, and she enjoys shows involving a zombie apocalypse or anything horror, documentaries or true-to-life stories, sci-fi, rom-com, and superhero stories. For me, superhero stories come first since I’m a huge Marvel fan.

We’ve watched probably all available zombies/apocalypse series and movies ever released in the modern era. This ranges from The Walking Dead to it’s spin-off Fear The Walking Dead, Train to Busan, Peninsula, Army of the Dead, Dawn of the Dead, and the list goes on. But among everything that we’ve watched, the K-Drama series Kingdom stands out head and shoulders among the rest.

Kingdom is the first original Korean drama produced by Netflix, with the first season premiering back in January 25, 2019. My wife loves the show so much, we’ve been eagerly anticipating follow ups to the show. We highly recommend this series even to people who haven’t watched any Korean dramas, and here are the five things about Kingdom Season 1 and 2 that makes the series stand out for us.

The series is set in the middle of Korea’s Joseon era and revolves around Lee Chang. He is the Crown Prince, and is next in line for the kingdom’s crown. However, he is only a son from a concubine. This gives the King’s current wife an opportunity for a plot to wrest the kingdom from Lee Chang by conceiving a son – a more legitimate heir to the throne. These plans are placed in jeopardy when the King falls ill to a disease prior to the Queen conceiving a child.

Some time later, the dead start reanimating elsewhere, which gives the Crown Prince a new problem to deal with. Fighting for the lives of his countrymen, Crown Prince Lee Chang’s battle against the dead has just begun. Since we don’t want to spoil the series for you, I’ll stop here – you’ll have to get more plot details by watching the show!

For us, production quality can really make or break a movie or TV series. There are movies and shows where my wife and I laughed, instead of getting tense or scared. That’s because that movie or TV show had poor production quality. Sometimes, we’d completely stop watching because things would look fake and would break our immersion. This is the reason why we’re confident that a movie or series is going to be great when it was produced by a known studio, like in the case of Kingdom, Netflix. The production quality these new streaming platforms have are really disruptive, making them highly competitive against traditional Hollywood film production. 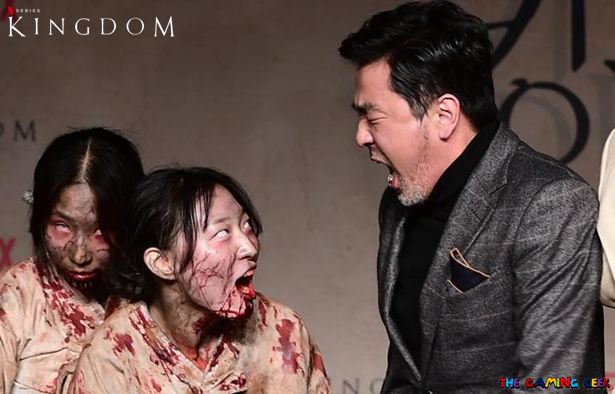 Ryu Seung-ryong screaming at a zombie.

Each of the episodes of Kingdom’s first season made us feel like we were watching a Hollywood movie. And this is due to three things: the story, the sound, and the visual effects. The story is well-written, with great characters. Their dialogue is strong and believable. The visual effects, whether practical or computer-generated, will make you believe that this world was real. Zombies were done very well, making them look rugged, rotting, and terrifying. The timing and volume of background noises was also effectively used to create tense scenes and jump scares.

It feels like the producers thought about every part of the show. Other shows wouldn’t think much of the introduction, but the producers of Kingdom used the introductions to add to the storytelling. The unique introduction of each episode features the story’s origin, and focuses on one of the important characters in the series. By the sixth episode of the season, the intro will completely reveal what happened to this important character. Kingdom’s first season has a production quality that exceeds any Korean drama that we’ve watched thus far.

The Mystery of the Zombie Disease

We’ve watched a lot of zombie movies and series. One of the main things that they lack is an explanation of where the zombies came from. Sometimes we feel like there wasn’t any closure as to when and where it all began. For example, let’s talk about another popular TV show that involves zombies – The Walking Dead.

In The Walking Dead, there was an attempt to reveal when and how it all began or how to stop the zombie apocalypse by the end of season one. The plot of season four where they introduced a ‘scientist’ character was also built entirely in the premise of resolving the zombie apocalypse but somehow we felt like this was just the way of the series to extend the story. The Walking Dead spun for more than a decade and as of writing, is yet to release its final season, but has yet to give their fans “the explanation” how and where it all began.

We loved the episode that featured the start of the zombie outbreak.

Kingdom does a really good job at explaining how such a thing could happen. Without spoiling too much detail, the show is able to tell you what causes humans to turn into zombies. It will also show you, as it unravels the story, how the zombie “disease” spread. And the show won’t simply tell you these. Instead, you’ll learn about what happened together with the show’s main characters. Through this approach, revelations have a lot more impact because we’re reacting to the new knowledge at the same time as the show’s characters are.

In any fantasy movie or TV show, the rules of that universe need to be clear. As audience members, in order to understand what’s happening, the movie or show needs to make logical sense. And this is one of the reasons why Kingdom stood out among its precedents.

Again, we don’t want to spoil the series for you so we’ll leave off specific details. But I’ll say this – the show revealed enough information about the zombie disease to make both my wife and I satisfied. The show was able to establish clear rules on how the zombie disease worked. And these rules are grounded in reality, too. 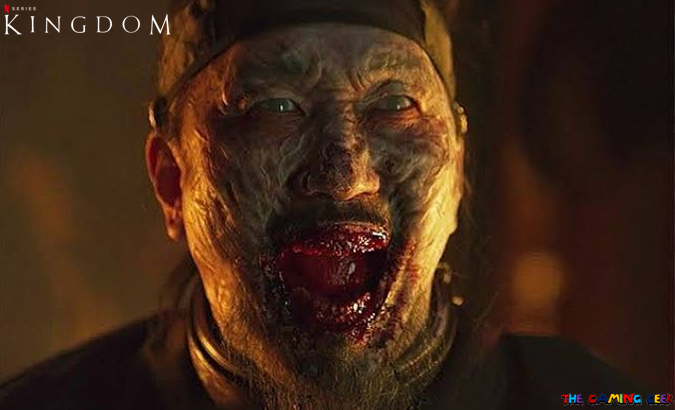 Like this guy, we were quite happy with the “zombie rules” that Kingdom established.

Before you say anything, a disclaimer. Both my wife and I know that this is a fantasy series; a fictional story. But when a work of fiction is written in a way that it’s plausible to happen in real life, we appreciate it more. And we liked this aspect of Kingdom a lot. The producers were able to make us believe in a zombie outbreak during the Joseon era, thanks to their grounded zombie mechanics.

Since Kingdom only has six episodes like most of Netflix’s series, the storytelling is quite fast. However, the story is still told clearly and in an entertaining way. Most of zombie series we’ve seen dedicate at least an entire series for character build up and storytelling of the zombie mechanics. There are zombie series that dedicate an entire episode to tell the story of each of its main characters. Some also put filler episodes sandwiched within the season that are dedicated to flashbacks and character build up.

For us, this is ineffective. We see this as a means to add more episodes and extend TV series, but are totally unnecessary. We liked Kingdom season one, not because it only has six episodes and was short enough to fit in our weekend free time. Even if Kingdom is a short series, the show was concise and focused on its plot. For us, it is very effective and smartly written. The characters were introduced briefly but well and effectively. The producers didn’t need too many flashbacks to establish these characters. They avoided including filler stories that would have unnecessarily padded the number of episodes.

My wife and I don’t have a lot of free time to spare, so we’d like to use it wisely. Which is why storytelling efficiency is important to us. I mean, who would want to spend four hours on a story that could be told in two hours or less? I’m sure there are people who have a lot of spare time on their hands, but that’s not us.

As Kingdom is set in during Joseon dynasty, power struggle is one of its sub-plots like most of the series and films during this era. The lead character, Crown Prince Lee Chang, was forced to leave the palace because there were people plotting against him. However, his moves seemed to be very well anticipated by the antagonists and he was almost always cornered because of this.

In the middle of season one, it would be made clear that there is a traitor among the Crown Prince’s companions. This was a significant hook for us because when this happens, each of the Prince’s companions have already been developed enough for us to be emotionally invested in them. Aside from being really interested in who the traitor could be, we were concerned on who it could have been. We actually wanted to believe that, this was wrong information and there wasn’t really a traitor. 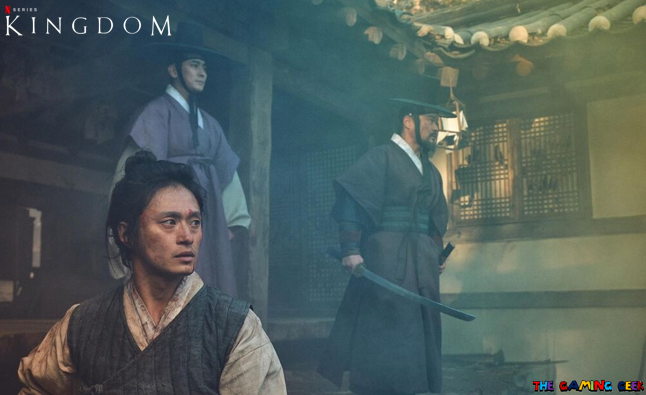 Was there really a traitor among the Crown Prince’s companions?

Unfortunately, the identity of the traitor won’t be revealed in the first season. But what made this series stand out is how the traitor mystery was used as a sub-plot in the series. The revelation of the traitor’s existence made sense of how the antagonists were always able to keep up with the moves of the Crown Prince during the first few episodes.

Also, the traitor mystery helped tie up the story arc of the final episode of Kingdom’s first season. Lastly, it hinted on the deeper reason behind the betrayal of the traitor which would be part of the main plot in the series’ season two.

There’s a lot more that we liked about Kingdom season one, but these are the five most significant ones. This show definitely stands out among other similar zombie series. Kingdom is a go-to series that we often re-watch because it’s a smartly written zombie series. Currently, Seasons one and two are available on Netflix for most regions. Also, a special prequel episode titled Kingdom: Ashin of the North is set for release on July 23. So there’s plenty of Kingdom episodes for you to binge watch this weekend!

Have you seen the first season of Kingdom? What do you think of it? Did it also make your zombie list as well?