In my quest to play as many of the renowned DS games as I could get my hands on, I knew I had to eventually play a first party Nintendo title. I chose the first game to come out from one of my most beloved Nintendo franchises ever – The Legend of Zelda: Phantom Hourglass. 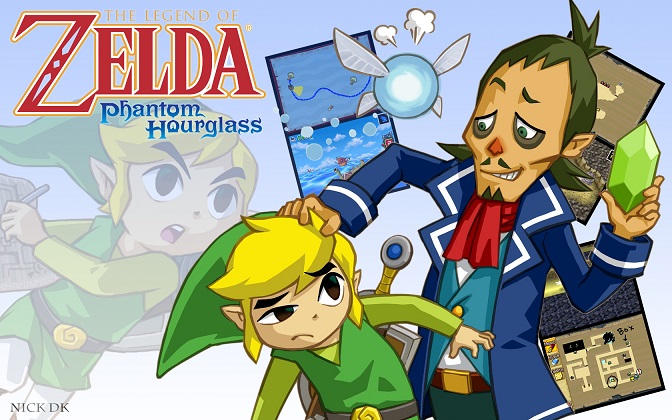 Link spends most of the game with these two characters tagging along.

The story picks up after the end of The Windwaker, with the same version of Link and Zelda travelling together in search of new adventures. Zelda, in typical video game fashion, gets abducted yet again, putting Link in a new adventure as he does what he can to save Zelda from her captors. Joining him in his quest are two supporting characters: Ciela, a spunky fairy who accompanies Link and serves as his “mouse pointer”, and Linebeck, captain and crew of a small, one-man steamship. 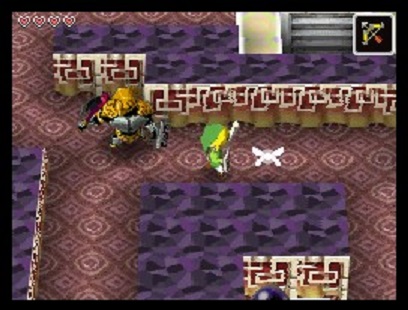 “Hey! Listen!” Ciela reminds me so much of Navi…

Ciela’s a throwback of Ocarina of Time‘s Navi (Link’s fairy companion in that game), and while she sounds exactly like Navi, she’s quieter and more useful – she acts like a mouse pointer, a graphical icon that tells you where you’re pointing at on the touchscreen. Meanwhile, Linebeck mans the helm of the ship that you’ll need to sail the seas. While Ciela’s personality isn’t anything new, the cowardly and opportunistic Linebeck is a breath of fresh air and serves as a perfect foil to Link’s innocent and courageous character. Their cutscenes are often hilarious due to Linebeck’s reactions, and if there’s one thing that I’m going to remember this game for, it’s probably going to be Linebeck’s character. 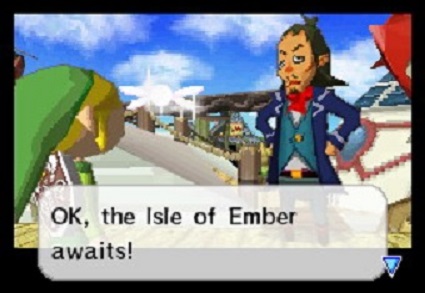 The cutscenes of this game are awesome, and Linebeck manages to steal the show whenever he appears in them.

The game’s layout has the map at the upper screen, with the game’s action happening on the lower touch screen. But unlike Castlevania: Dawn of Sorrow where I found it to be strange, having the action take place in the touchscreen made sense because 95% of Link’s actions are controlled by the stylus. Yes, you read that right – the game still has the core mechanics of an action adventure game, but you’ll have to control Link by moving the stylus. Everything is done with the stylus, from walking, running, attacking with a sword, or even using Link’s standard arsenal of equipment. That’s why having Ciela as a “mouse pointer” is important – Link will head toward her when you move him. 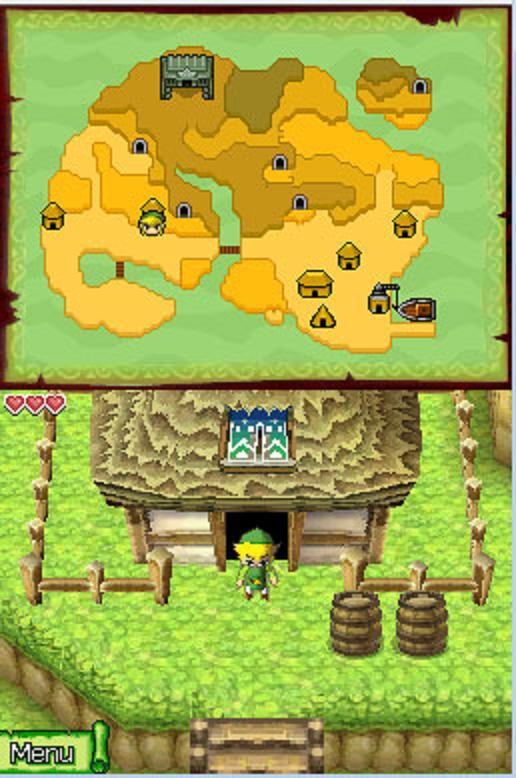 Having the action take place on the lower screen felt natural in Phantom Hourglass.

Aside from controlling Link, The Legend of Zelda: Phantom Hourglass offers other innovative uses of the stylus and the touchscreen. For instance, you can move the map screen to the touchscreen so that you can write notes, leave marks, or draw patterns – a lot of the puzzles in Phantom Hourglass involve digging in specific spots to uncover required items, using switches in sequence, or drawing patterns formed by following landmarks on the map. 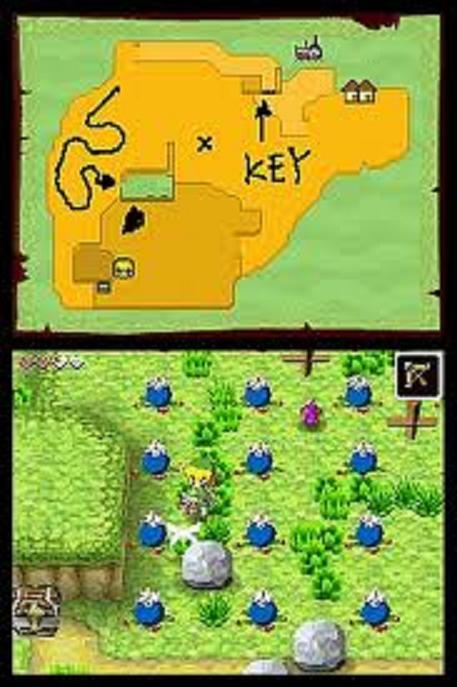 Being able to write notes on the map wasn’t only handy – it was necessary to figure out some of the puzzles in this game.

Travelling by sea is also stylus-controlled; instead of relying on the wind to move your boat, all you need to do is draw a path on the map and the steam-powered ship will automatically follow it, freeing you up to shoot the ship’s cannons at sea-bound enemies. 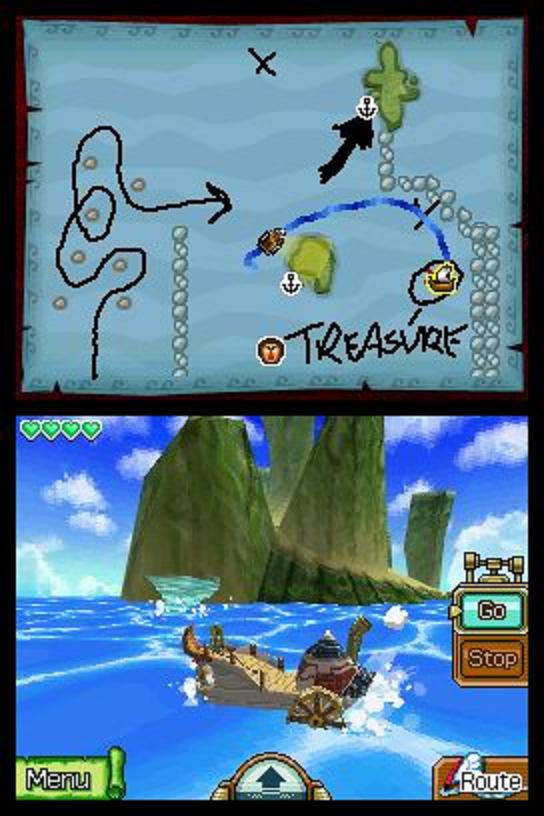 You can also write notes on your sea charts, especially for marking off locations that you’ll need to visit later on.

Even collecting sunken treasure involves the stylus – a little into the game, you’ll get a Salvage Arm that you can install on your ship. Rather than simply dropping the Salvage Arm into the water and pulling up the treasure, you now have to control the Arm in order to steer it away from underwater obstacles in a neat little minigame that you’ll be playing often. 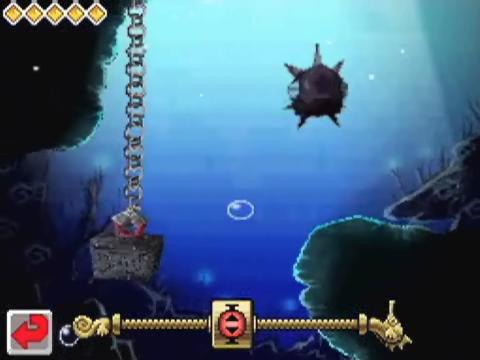 Sometimes, a Legend of Zelda game is named after a magical artifact, and this game is no exception – it is named after the Phantom Hourglass, an item that protects Link from the Temple of the Ocean King, the game’s main dungeon. The Temple of the Ocean King has been taken over by evil, resulting in it becoming lethal to anyone who ventures in. As Link, you will take damage over time when you are in this dungeon except if you are in certain safe zones strewn across the area, or if you have the Phantom Hourglass. When you start, the Phantom Hourglass can only protect you for a short time, but as you progress in the game you collect more sand for the hourglass, which will then allow you to last longer in the Temple.

Yes, you will have to visit the Temple of the Ocean King multiple times. This kind of annoyed me about The Phantom Hourglass, having to revisit the Temple of the Ocean King and re-doing all of the puzzles that you’ve already solved previously. I hated it the second time I had to do it, but by the third time I had already accepted that it’s part of the game’s core mechanics, and it got a little more interesting anyway since the new items I had obtained allowed me to access parts of the dungeon that I didn’t have access to before. Some people say that this lengthens the game artificially, a la the sailing in The Windwaker, but it revisiting the Temple felt necessary to me once I got used to it. 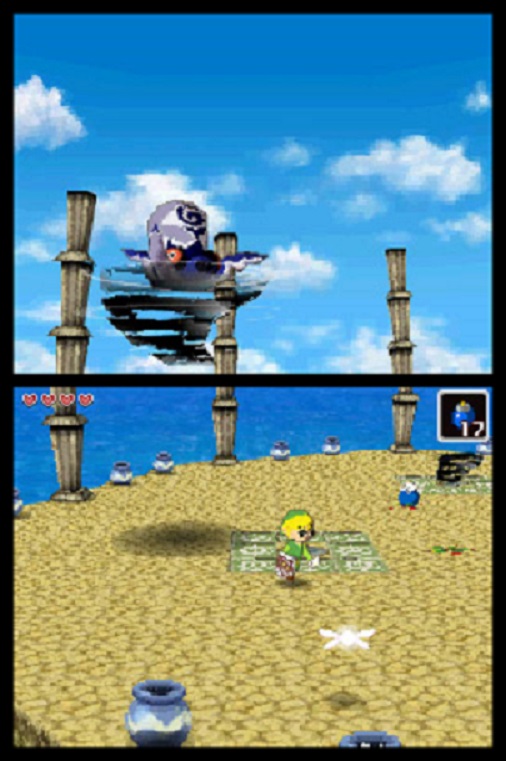 The bosses of this game are visually stunning, but easy to beat – once you figure out how, that is.

The last thing I want to cover about this game are the boss battles. The Legend of Zelda is known for great boss design, and The Phantom Hourglass is no exception as the boss battles here are amazing. The game utilizes the dual screens of the DS effectively – since you don’t need the map screen during a boss battle, why not use it for gameplay, right? In each boss battle, the game either shows a taller gameplay screen, or shows two different perspectives of the battle. They each have their own patterns of attacking, and their own vulnerabilities that will require inventive use of your items. However, once you figure their weakspots out, most of the bosses become very easy to beat.

I enjoyed The Legend of Zelda: The Phantom Hourglass tremendously. It’s the first DS game that has impressed me not just in how it plays, but how it looks. Stylus controls may not have taken off (I don’t know if there are any 3DS games that utilize this) but Nintendo was able to show that you can make an entire game around it and still have an amazing game. I’ve enjoyed it immensely, and I didn’t even go through the multiplayer options (I ignored them completely). This game should definitely be a part of a gamer’s Nintendo DS library.