One of the reasons why I finally got myself a 2DS was so I could finally play some DS games, a handheld system that I skipped entirely. The first game that I chose to play? Spider-Man: Shattered Dimensions.

Spider-Man: Shattered Dimensions is a 2D platformer/beat ’em up hybrid where you get to play not only as the main version of Spider-Man but other versions like Spider-Man 2099 and Spider-Man Noir.

The premise of the game involves Spider-Man going about his regular crime fighting duties when he encounters Mysterio, who is in possession of a magical tablet. During their fight, Spider-Man shatters the tablet in an attempt to obtain it. The fragments of the tablet scatter across three alternate realities: Spider-Man Noir’s 1930s world, Spider-Man 2099’s alternate future, and Spider-Man’s own present. This leads to the three heroes working together to gather the fragments of the magical tablet, thanks in part to the guidance of Madame Web, the Spider-Man family’s resident psychic who reaches out to all three heroes. 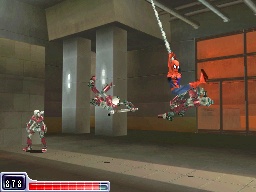 Look out! Here comes the Spider-Man! 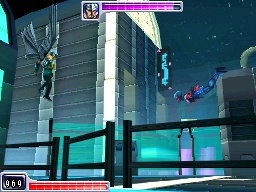 Spider-Man 2099 really does glide in the comic books, so I’m glad they kept this move in the game.

Eventually, each Spider-Man will get to learn each other’s unique abilities in order to fully explore all of the areas in their respective dimension. Also, the three Spider-Men can learn new abilities via upgrades that they’ll discover as they progress through the game, such as insulated webbing and the ability to dash and build momentum. These abilities eventually become necessary in order to explore some of the more difficult to reach areas in the game.

In terms of the combat, all three Spider-Men share the same arsenal of moves and attacks. This is a good thing because you’ll be switching between the three of them quite often – having different move sets for each can get confusing. All three Spider-Men start with a wide range of attacks at their disposal  and also learn new moves along the way. Eventually, you’ll be able to do back kicks, uppercuts, aerial combos, leg sweeps, you name it. 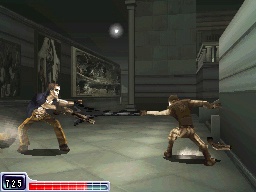 Didn’t your mother teach you not to play with guns?

One combat mechanic that I really like involves yanking your opponent’s weapon out of his hands using your webs. It becomes really necessary, especially when you start facing those minions with shields or rocket launchers that hurt pretty bad. 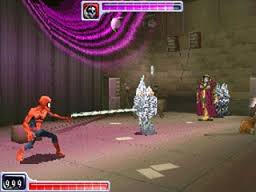 This is how Mysterio looks like now? What happened to the classic fishbowl look?

There’s also a mini-game that you have to play before switching to a different Spider-Man. It involves spinning around a fragment of the magical tablet while poking at horrible looking sprites of hands and what looks like a bad drawing of the Hydra logo. I hate it every time I need to play it and I think this game could’ve done without it. I guess the developers had to put in some game element that would utilize the stylus and touch screen of the DS so…

Initially, I was underwhelmed by the graphics as I was used to what a 3DS is capable of. Eventually, I came to like it. The graphics does what it needs to do and that is to show a fast-paced Spider-Man adventure. The action is very fluid, with responsive controls and a lot of moves that you can do. I also love the addition of voice acting in this game. I didn’t know that the Nintendo DS could handle it so I keep getting awed whenever I play a game with voice acting.

The plot is basic and derivative of what’s been done before. You can’t really expect a lot from a game featuring a popular license, so I understand. The concept of involving the different Spider-Men from other dimensions is fresh. More importantly, it’s a good excuse to get Spider-Man 2099 and Spider-Man Noir into a video game. They aren’t popular enough to sell a video game on their own.

The game is a little repetitive though. There are only a few kinds of enemies, dressed up in different colors, so you might get tired of seeing the same old minions doing the same old attacks. Each dimension is also too small, it’s very easy to explore each area once you’ve learned all the requisite powers. And that spin the tablet game is horrible.

Despite the flaw, I like this game a lot. I expected a quick paced, fun action game where I can play as Spider-Man and beat up bad guys. And that’s what I got. Maybe I’m biased because I’ve been a fan of Spider-Man for years and have played a few Spider-Man games that are really, really bad, and I can say that playing this game was an entertaining experience.