The Spider-Man video game that was released in 2000 for the Sony Playstation is quite memorable for me. I remember loving this game a lot when I was able to play it decades ago. And to my memory, this is the first superhero video game that broke into the mainstream. Instead of playing that version, I opted to visit the Dreamcast version because people refer to this as the definitive version of the game. 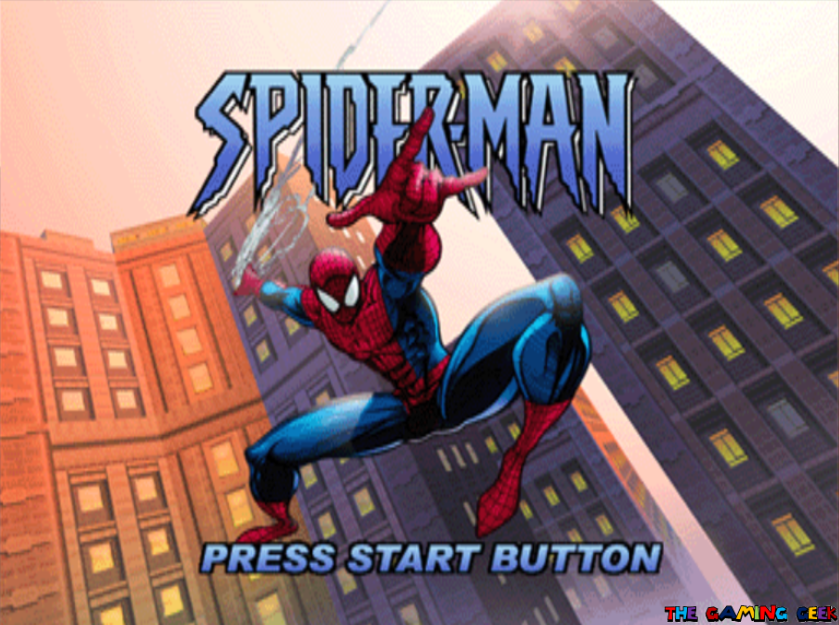 Title screen of Spider-Man for the Sega Dreamcast.

Spider-Man is a 3D action adventure game that was originally developed by Neversoft and published by Activision for the Sony Playstation 1. This was ported to the Sega Dreamcast by Treyarch. In the game, you take on the role of Spider-Man who is attempting to clear his name after an impostor Spider-Man had stolen Doctor Octavius’ technology. The game has a single player campaign mode and several Training Mode mini-games. The single player campaign is split across six chapters. When you start a New Game, you can choose from three difficulty settings. 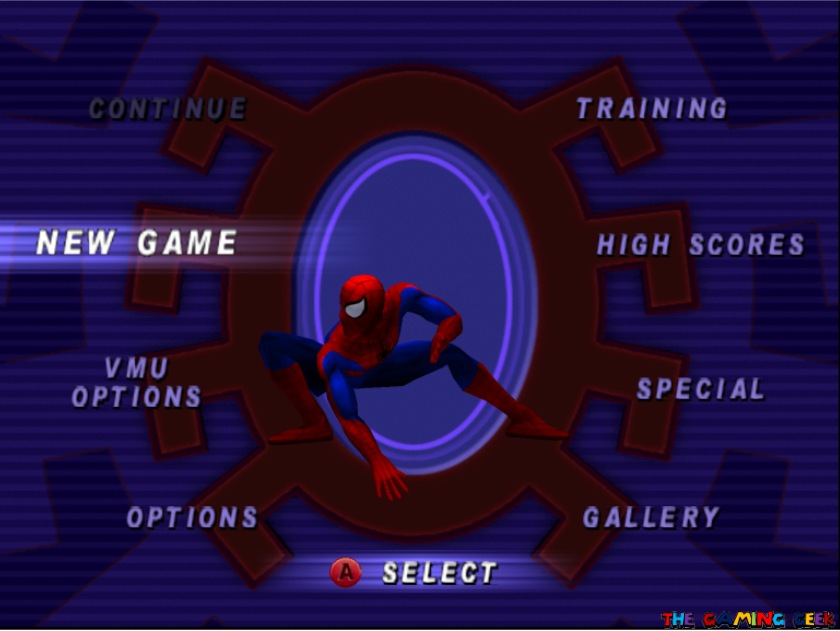 This title follows a more modern game design, doing away with lives. When you get knocked out or fail a mission objective, you get sent back to a check point. There is no Game Over; you can continue your game from check points as many times as you want or quit entirely. The game has a save system and you can have a block of up to eight save slots per VMU. You do have a health meter in the game. When it is fully depleted, you get knocked out. You also have a web meter in the game. Any use of webbing will deplete the web meter. You can carry up to ten web cartridges (each one represents a full meter) and usually start missions with seven. 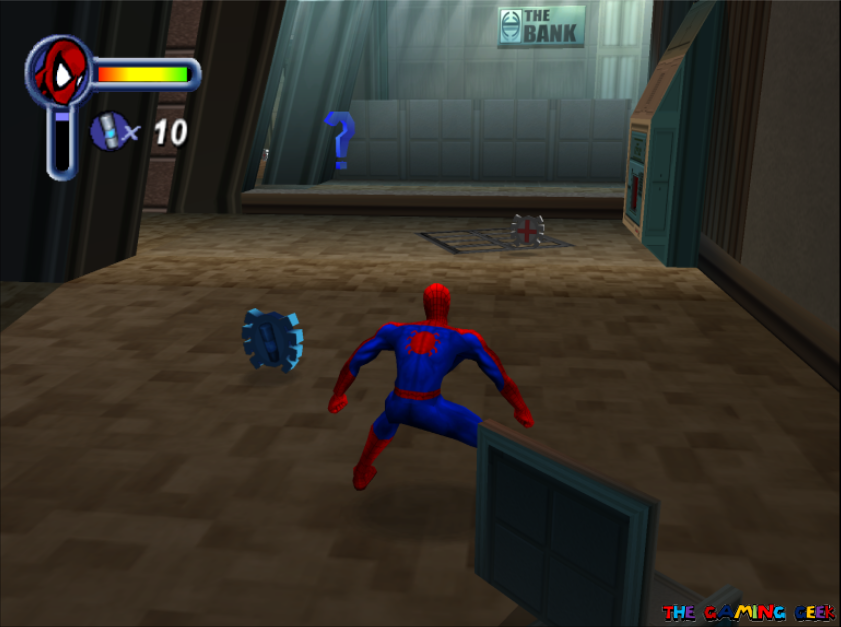 The blue power up gives you webbing; the white power up heals you up.

This game also has a lot of additional content. There are several unlockable costumes (some even grant Spidey special abilities), a Character Viewer complete with Stan Lee’s narration, a Movie viewer, and even a Level Select option where you can replay any of the missions that you’ve already beaten.

In this game, Spider-Man has gotten a lot of moves that helped him transition well into a 3D adventure game. Punching, kicking, jumping, and shooting webs are each mapped to one face button. Normal attacks automatically do three string combos with a knock down finisher. For some reason, Spidey doesn’t have a jump kick in this game, but he does have a diving punch. 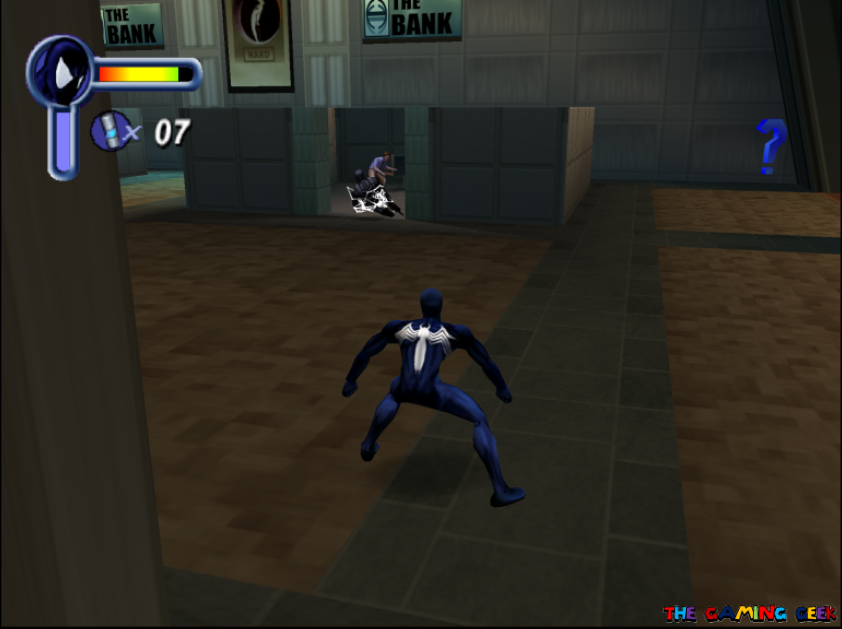 Some enemies can be defeated by simply webbing them up.

When you press the webbing button on it’s own (the D button on the Dreamcast), it shoots a web-line. Holding it down continues the web-line. If you’re locked onto an enemy, pressing and holding the webbing button will web that enemy up completely. Pressing the webbing button together with a directional button will do a special web action. Do it with Up and Spidey shoots impact webbing (a web-ball projectile). Left makes Spidey coat his fists in webbing (stronger punches), and Right will create a web dome that acts as a shield. These will all use up a lot of web fluid. Spider-Man can also web-swing normally, or shoot zip lines to pull him to a wall or a ceiling really quick. 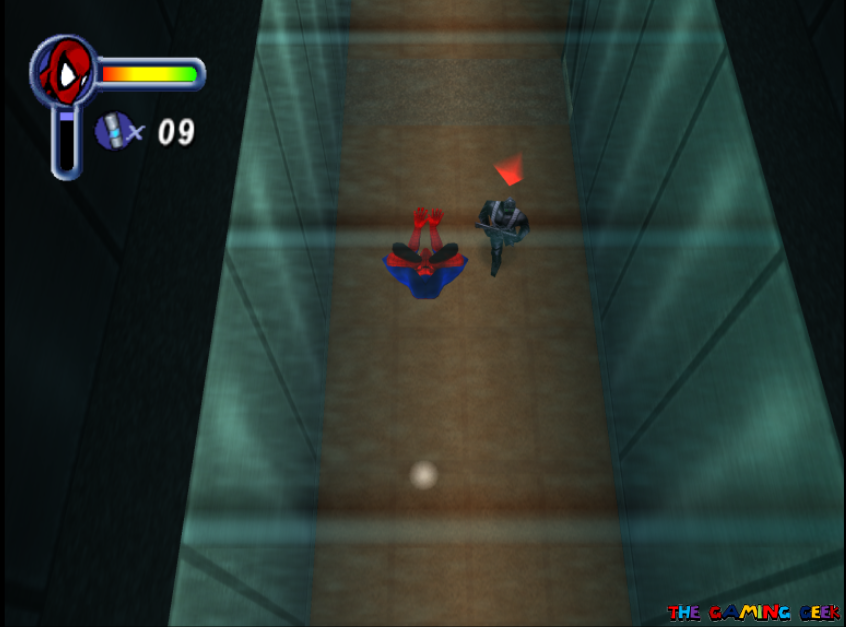 You can sneak up on enemies by crawling across the walls or ceilings.

He also easily moves from the ground to a wall or a ceiling. However, you will need to give the game a moment to align itself whenever you change to a surface. If you don’t take that moment, it’s easy to get disoriented because your controls will be all messed up. It’s a really short moment though, something that’s easy to get used to.

The first thing that caught me once I got to the midpoint of this game was how it managed to give you a different experience. There’s quite a bit of exploration to be done, but different areas require you to explore differently. In rooftop stages, you’d need to do a lot more web-swinging. Then there are indoor stages where you’ll need to be crawling across the ceiling. Sometimes, all you need to do is get to the end of an area. In other stages, you need to perform a number of objectives, such as rescuing hostages or disabling some sort of mechanism. 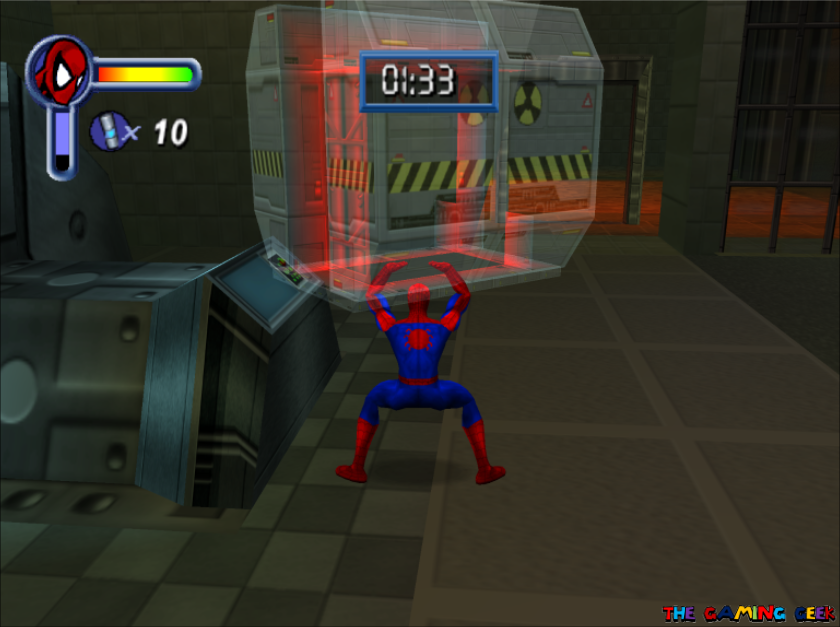 You need to figure out how to take care of this bomb before it explodes.

My favorite mission types are the chase sequences, which are smartly inserted in between your standard adventure stages. And even these offer good variety. One such chase sequence has the police chasing after Spidey! It’s an adrenaline-packed section that comes early in the game. 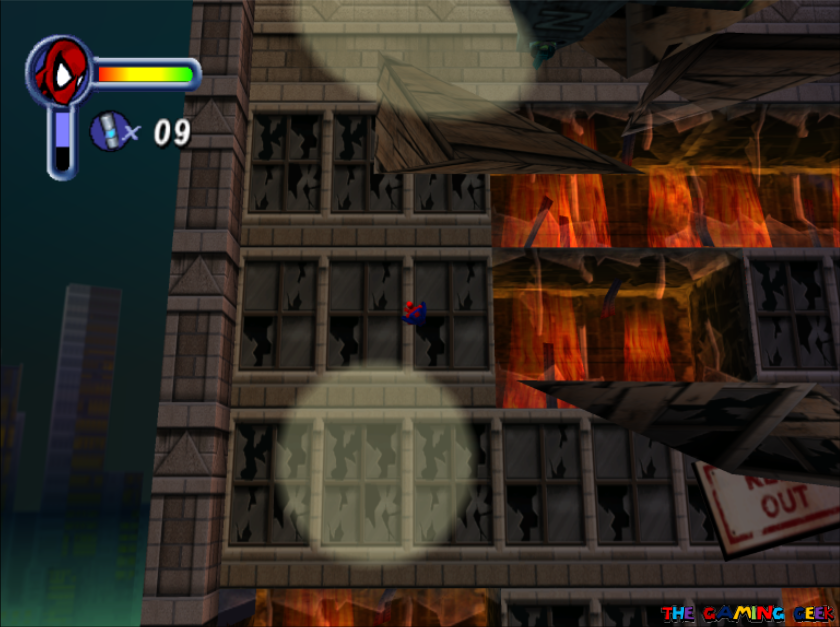 The other chase sequence has you chasing after Venom! Fall too far behind and you’ll have to start from the beginning. Its interesting how simply changing the perspective from the one being chased to the one doing the chasing can change the feel of the missions, even though your actions are the same. 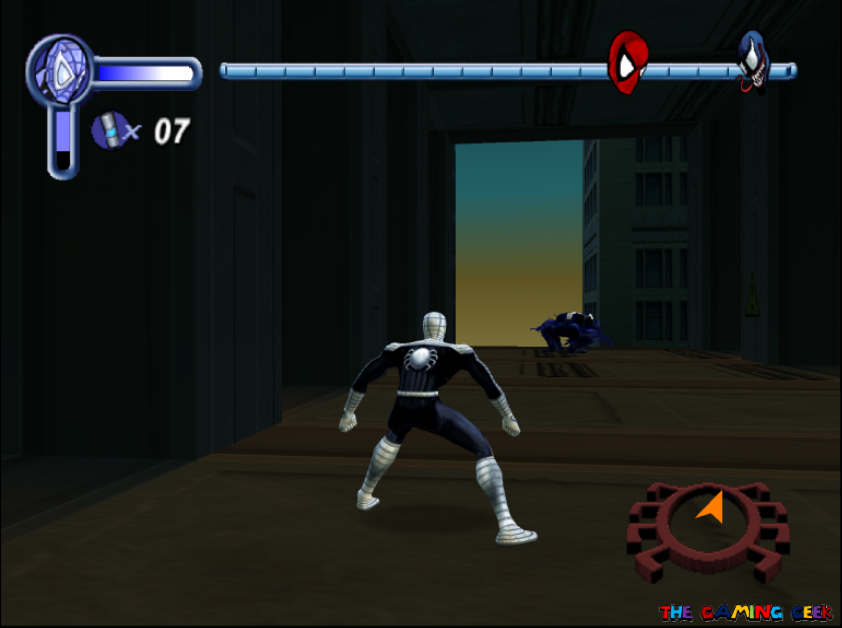 What do you think is going to happen once you catch Venom?

It’s amazing how this game never felt too repetitive. The developers really did a great job at designing these missions around Spidey’s capabilities.

One aspect that I really look forward to when it comes to superhero themed video games are the boss battles. This is when I really get to step inside my favorite superhero’s costume and battle his/her supervillains. While the boss designs are a little dated, Spider-Man did not disappoint. You get to face classic Spider-Man villains like the Rhino, Scorpion, Mysterio, Venom, Carnage, and Doctor Octopus in this game. And each one of them were well designed, even though most were limited to two or three moves. 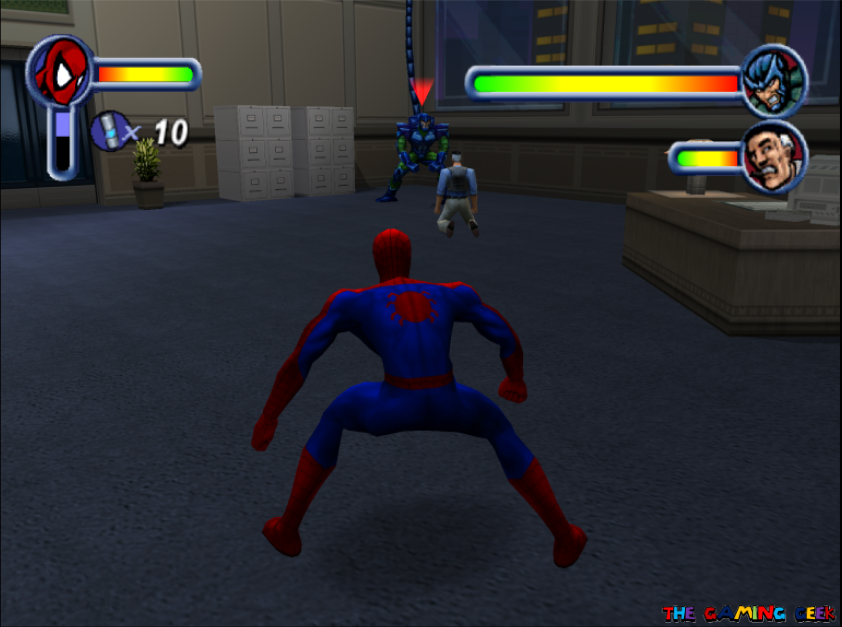 You need to take care of Scorpion and keep J. Jonah Jameson out of harm’s way.

A good example is the Scorpion battle. Instead of fighting him one on one, he’s chasing after J. Jonah Jameson too. So the battle itself has a unique feel to it. Mysterio’s power of illusions and technology is well represented, as is Doctor Octopus’ use of his four mechanical arms. 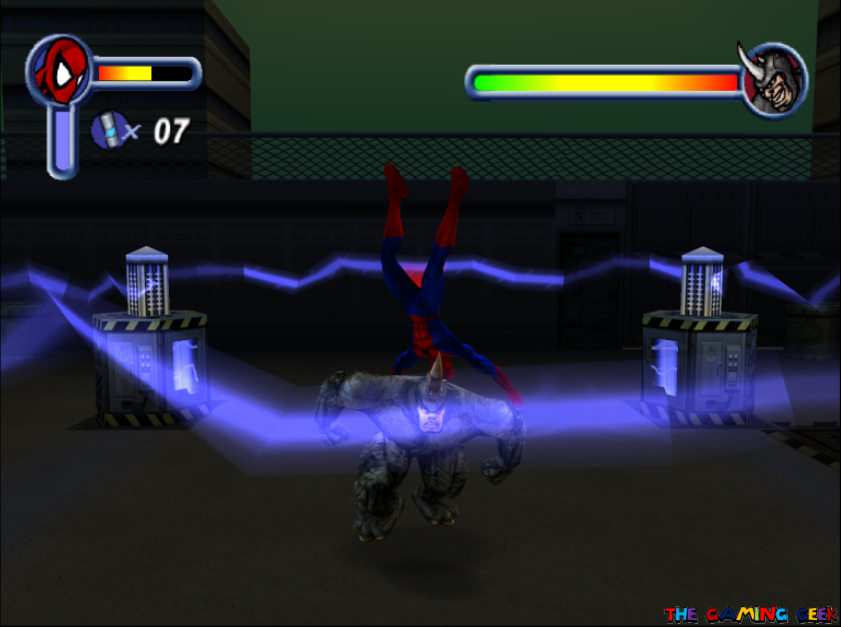 It’s easy to figure out how to beat the Rhino.

The battles with Rhino and Carnage are a little straightforward, but their weaknesses were designed into the battle itself so fighting them feels great. And boy, is Venom such a pain in the ass in this game.

Much like any game released in this timeline, this game’s graphics don’t hold up that well. Polygons are blocky, and it can impact your immersion if you’re not used to these graphics. Thankfully, the game’s stages avoid using curved surfaces that would make the polygons obvious. It also helps that Spidey’s 3D model isn’t as blocky as the rest of the game’s characters. These graphics were as good as they can get back in the day, though. 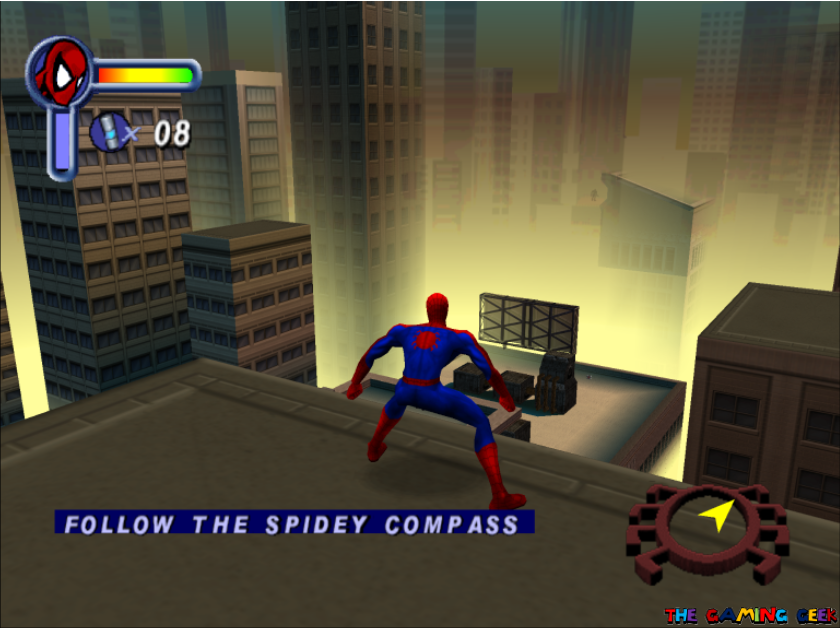 The game avoids using curves in it’s stages and levels.

In terms of sounds, there’s a lot to love here. The music of the game is really good, with a good mix between subdued and high energy tracks that fit the mood of your current mission. But the most memorable tracks for me are the remixes of that old 60’s Spider-Man animated series. They are so good, they would still fit well with today’s music. The voice acting in this game is excellent too. Each voice actor fits the role assigned to them, especially Spider-Man’s. No surprise here – they got the same actor from the classic 90’s animated series to reprise the role. 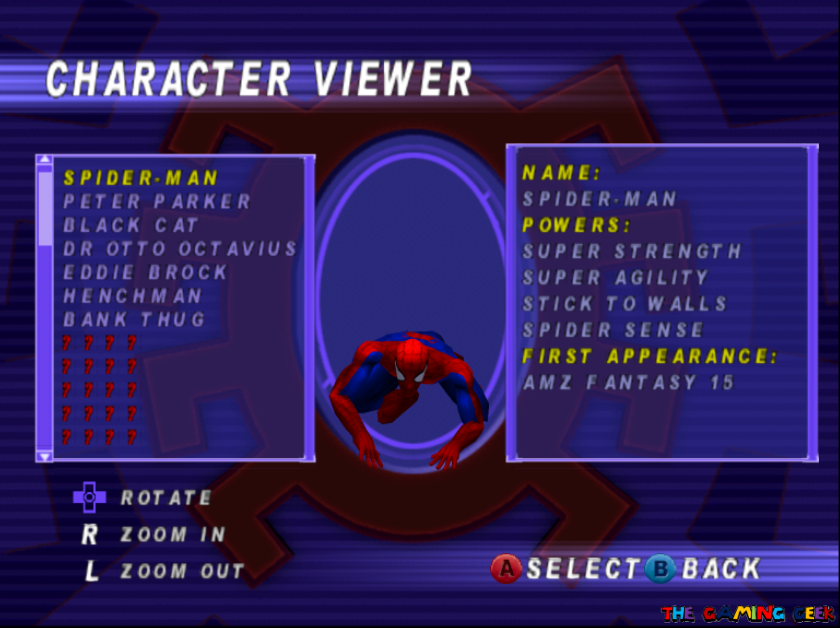 Stan Lee will talk about each character, including generic ones, in the Character Viewer section.

What really pushes this game above your usual video game is the presentation value. The game’s storyline moves along together with cutscenes that are really well done and plentiful, all done with the excellent voice acting. Stan Lee himself lends his voice, narrating parts of the story and even describing each character in the game’s Character Viewer. All this makes for a really immersive experience.

I seldom enjoy revisiting video games from the fifth and early sixth generation of video games because developers were still transitioning to 3D gaming. This is where you see rough polygon graphics and mechanics like tank controls. However, Spider-Man managed to avoid those design principles that were common at the time. The gameplay had some flaws such as a lack of depth in the combat mechanics and absence of proper enemy targeting, but these are quite minor.

What you’ll get in Spider-Man are game mechanics that still work today, graphics that somehow hold up thanks to the quality of the polygons used, and well designed stages and missions that keep the experience fresh. Add some wonderful voice acting, including lines from Stan Lee himself, and a lot of polish and additional content, and you’ve got yourself a timeless classic. Sure, there are better Spider-Man games that will be released later on, but you’ll see how this game inspired future generations of Spider-Man games to come. And yes, if you are interested in revisiting this game, play the Dreamcast version if you can. And if you can’t, you won’t go wrong with either the Playstation 1 or the Nintendo 64 versions either.