Like any other person who has video games as a hobby, I’ve got my own backlog. It’s become longer than what I’m used to, thanks to some awesome sales that made it hard to resist buying new games. In managing my backlog, I found that talking about it helps me push myself to cross out items on my backlog list. So that’s what I’m going to do every now and then – talk about the game I recently beat, talk about the game I’m going to start playing next, and then end the post with the remaining games on my backlog.

With all that said, let’s begin! 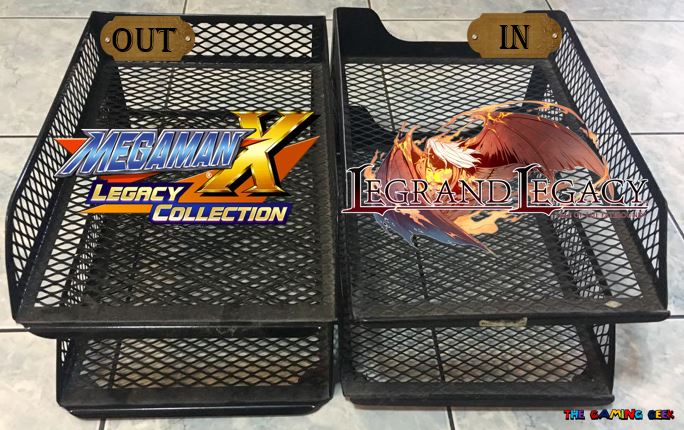 I just beat all games in the first Mega Man X Legacy Collection and will now play Legrand Legacy next.

Since I’m counting this as one game, I had to beat all four before I could cross this off. And these games are tough. I’d even go as far as say they’re as tough as Celeste or Hollow Knight. The Mega Man X Legacy Collection does not support save states, so I had to beat each game the traditional way. The only advantage I had was not needing to write down passwords. The Rookie Hunter mode makes each game very easy. I used it to get some in-game achievements. However, you earn an achievement for each of the four games that you beat without using this mode. I wanted to get those, so I beat each game straight with X.

It took me a while to beat this because I didn’t want to play each game in succession. I started off with X, then played several other games before moving to X2. I did the same thing after, played other games. However, after I beat X3, I decided to just play X4 so I could finally cross this one out.

And I played X4 twice. I used X in my first playthrough and Zero in my second. Unfortunately, I used Rookie Hunter mode near the end of my Zero playthrough. The gauntlet at the end was just too tough and I was already getting tired of the game by then. I just wanted to get this done with. I’ll try a clean Zero playthrough in the future if I find the time.

Working from home has allowed me to play video games in the middle of work. To still be responsible, I don’t do anything that impacts my productivity. I realized that doing some grinding in RPGs fits well into my work day, so I stocked up on RPGs

Legrand Legacy is one of the RPGs that I have on my backlog. I’m starting with that because my other RPGs are triple A ones like the first Xenoblade Chronicles and Tales of Vesperia. I was afraid of not enjoying this indie-published RPG if I had played one from a big studio prior. The timing is also deliberate – I had just come from a 16-bit platformer, then a 32-bit platformer. So I’m not coming from a game with really good graphics.

I’m already 5 hours into the game and have hit my first grinding wall. Apparently, my characters need to be at Level 27 where I’m at. They’re only at Level 25, so I’m moving forward too fast. Unlike the Mega Man X games, which I couldn’t touch during workdays, I’ll be able to sneak in a couple of battles every now and then in Legrand Legacy.

The Backlog (In alphabetical order):

Whoa. I still have 30 games in my Nintendo Switch backlog! I wonder how many I’ll be able to cross off before my next video game purchase?