For someone who doesn’t really enjoy driving/racing games, I’m surprised at how much I’ve been enjoying Asphalt 9 Legends on the Nintendo Switch, a free-to-play racing game by Gameloft. I’ve already spent more than 200 hours on this game and rarely a day goes by that I don’t play Asphalt 9. However, I feel that this game is a little underestimated by Nintendo Switch owners, especially since it has the same grind-related issues that free-to-play mobile games have. More than anything though, I think people who try this game get disappointed because they are expecting a full racing game – and that’s not how I approached Asphalt 9 at all. 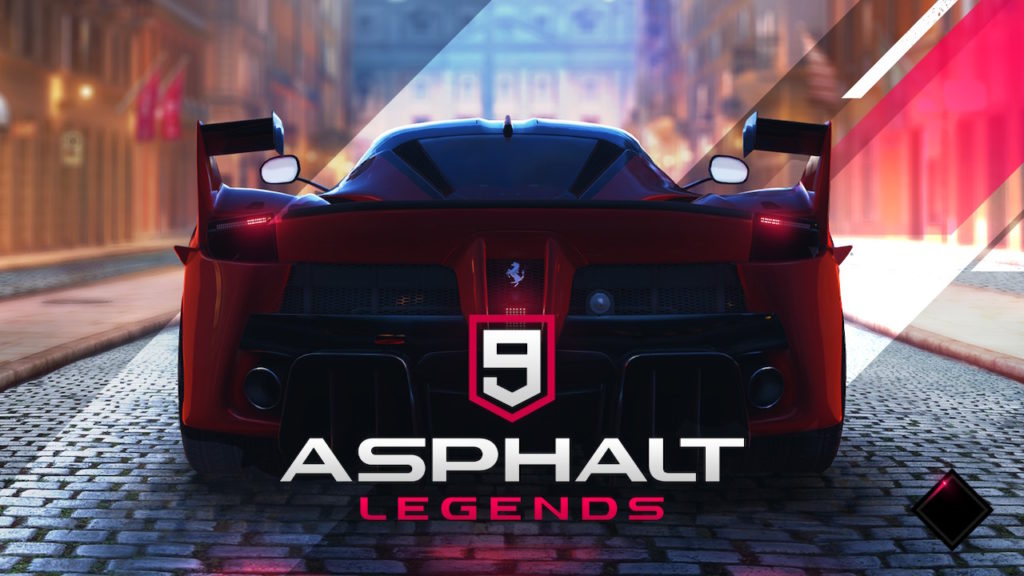 Not a Racing Game – It’s a Racing Career Simulation Game

When I started playing Asphalt 9 I knew that as a free-to-play game, I would need to grind for this game’s resources – be it cars or in-game currency. And that was completely true – when you start, your play options are extremely limited. You only get one car (the Mitsubishi Lancer Evolution – the worst in the game) and aside from this car not being fast enough to quality for most races, you can only use it six times before you’d need to recharge it (recharge times vary between 2 minutes to almost one hour, depending on how powerful the car is). Both in support of Gameloft and to add one more car to play with, I spent $1.99 on the game for a cheap launch car bundle (the Porsche 718 Cayman S).

It was at that point that I started looking at Asphalt 9 differently. It’s not a racing game like Need For Speed where I’d have a bunch of different cars and game modes to start with, but a racing career sim wherein I’d have to accomplish tasks with what little I had started with. I wasn’t playing Asphalt 9 to race cars and win – I was playing to get more cars and get the needed resources to upgrade them. So I made the most of my first two cars and started doing races that would get me car cards – items that you need in order to unlock more cars.

I’m not an Asphalt 9 expert, so what I’m about to share isn’t at all the best way to play the game, but it worked for me. Essentially, the early Asphalt 9 phases for me focused on the actions that would help me get more cars. The first ones available to everybody all the time are the Daily Car Loot wherein you could get a card for several different cars. 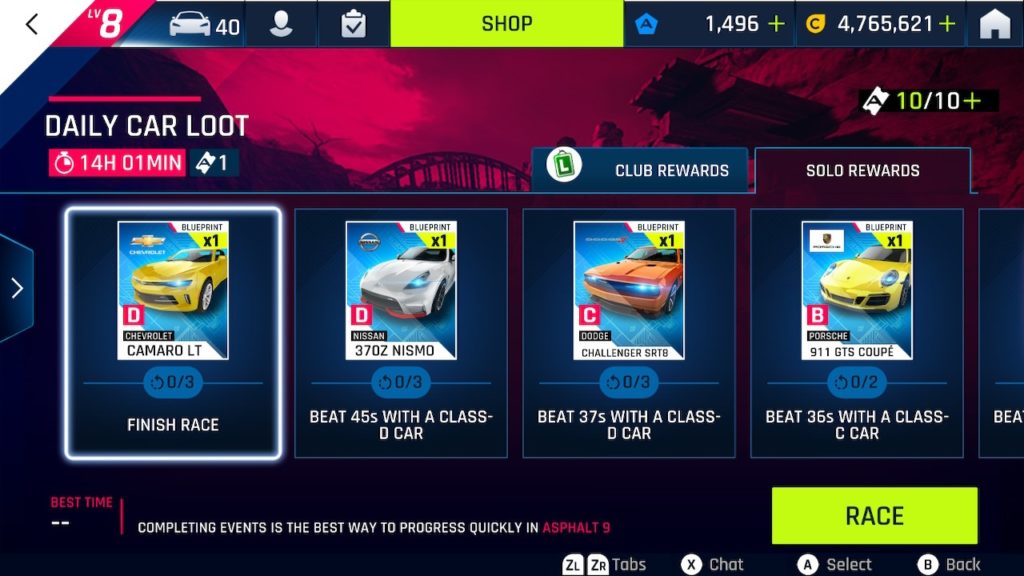 The Daily Car Loot races are a good way to add more cars to your Asphalt 9 Legends inventory.

The Porsche 718 Cayman was a big help at the start for me. It was a decent Rank D card that allowed be to get cards for three cars (Camaro, 370Z Nismo, and the Dodge Challenger SRT8) each time I did a Daily Car Loot race. Just by doing three Daily Car Loot races daily, I eventually unlocked and maxed out all three cars.

Getting more cars allowed me to get more play out of Asphalt 9 as I had other cars I could use while waiting for my primary cars to recharge. And these new cars were usually better than what I had previously, so they allowed me to win more races in the other available game modes – such as the expansive Career mode.

The next milestone that I targeted was getting faster cars for higher level races, and one decent Rank B is available for starters –  the Lamborghini Asterion. You can easily get cards for the Asterion by completing 6 out of 8 Daily Goals, which are the following:

Doing the Daily Car Loot races already covers three of the Daily Goals (Play Daily Events, Play Any Race, Win Reputation for your Club), so you only have to worry about doing three others goals. The adjustment I had to make when playing Asphalt 9 was refraining from blowing all my in-game money on upgrading my cars – since car upgrades are part of the Daily Goals, I needed to make sure I had enough in-game money to do an upgrade every day. This covers four of the needed six goals. 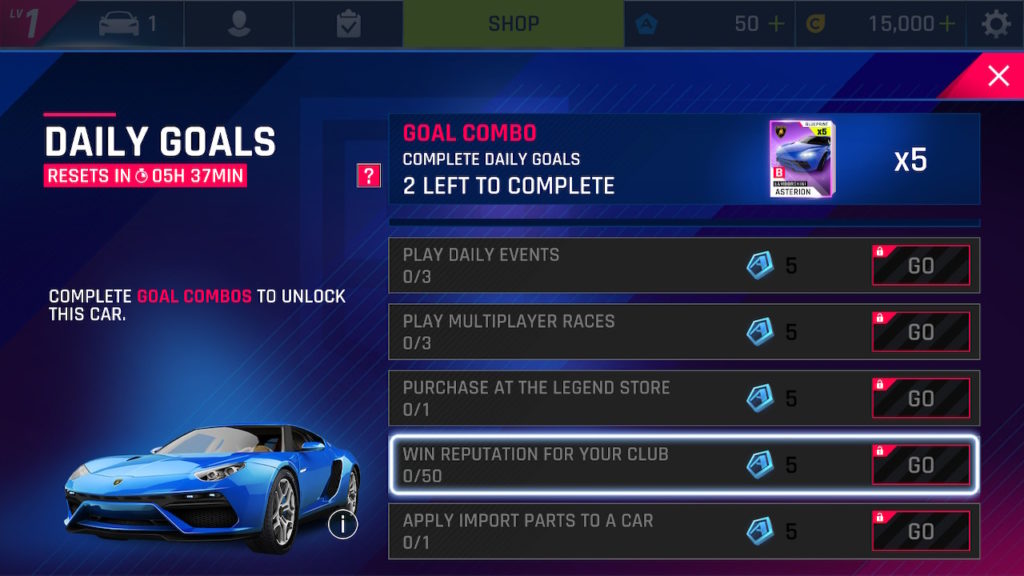 You can easily unlock the Lamborghini Asterion by completing 6 out of the 8 Daily Goals available.

Applying Import Parts is similar to a car upgrade, except you need the actual import part as well as in-game money. You get Import Parts from card packs that you can win from different races, and sometimes I buy Import Parts in the Legend Store. Doing all those covers all 6 of the needed Goals in order to win 5 Lamborghini Asterion cards every day. Since you only need 40 cards to completely unlock the Asterion, it only takes 8 days for you to add this car to your garage.

Doing one of the Daily Goals gets you 5 credit tokens, so you also stand to earn a minimum of 30 credits if you do what’s required to get your daily Asterion cards. These can be used to purchase individual cards for specific cars that you want or to buy card packs in the in-game Store. I’ll be honest, getting the Asterion is only one step to this. I had to get a whole lot more cards just to be able to upgrade it to it’s maximum level.

Asphalt 9 Phase Three: Unlocking the Aston Martin Vulcan and Beyond

Once I got the Lamborghini Asterion which was a decent Rank B car, I started grinding for my first Rank A car, the Aston Martin Vulcan, which you can get one card for daily in the Daily Car Loot races. It’s pretty straightforward, but it took me a lot longer to complete as I could only get one Vulcan card guaranteed.

But getting the Challenger SRT8 and the Asterion helped be qualify for and win a lot more races and other faster, better cards. Recently, Gameloft has been rotating events that gives out cards for the Rezvani Beast X (Rank C), the Cadillac Cien Concept (Rank B), and the VLF Force 1 V10 (Rank A) so I’ve been playing those races now. I don’t have good enough cars for the Trion Nemesis (Class S) races – hopefully I’ll have a fast enough car to win in those races soon. 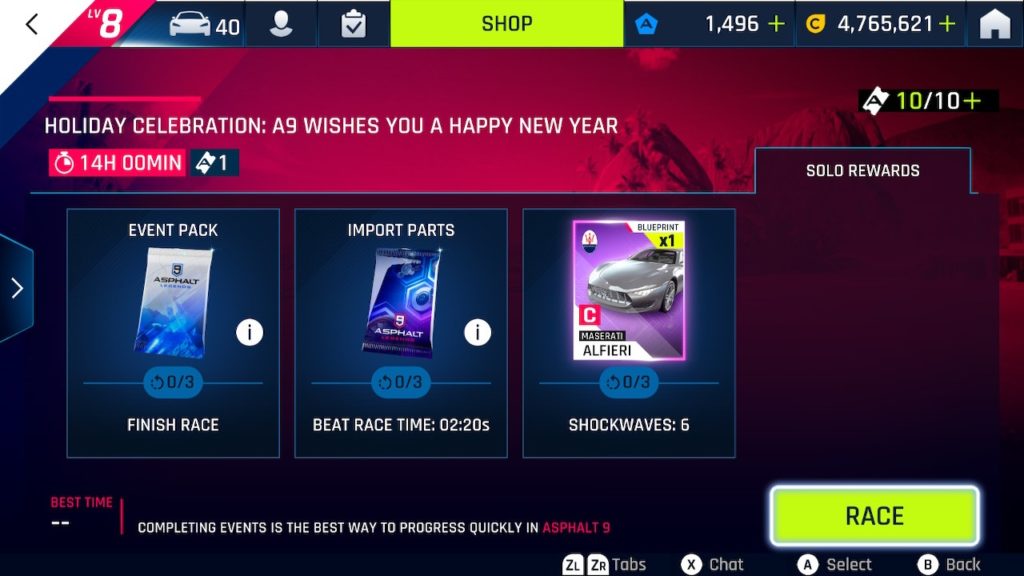 Keep your eye open for new Daily Races that offer the chance to unlock more cars.

That’s how I started in Asphalt 9 Legends and that’s what kept me playing the game for quite a long time. Now, my Asphalt 9 garage has several good options whenever I need a Rank D, C, B, or A car. I did not need to spend any more money beyond the initial $1.99 that I paid at the start, so tt’s funny when I see people say that Asphalt 9 is just pay to win. The fun of Asphalt 9 comes from building your collection of cars and I’ve managed to do that with minimal spend. I’m glad Asphalt 9 made its way to the Nintendo Switch and I wish other players would give it a try too.