3DS Games – The Legend of Zelda: A Link Between Worlds
0 Comments

I wrote this post for The Legend of Zelda: A Link Between Worlds more than 7 years ago. So it’s not in the same style as my current posts. Nowadays, I would only write about a game after I beat it. Back then, I would write about a game while in the middle of playing it. Still, it’s neat to revisit my thoughts on this game so let me republish it. I hope you’ll enjoy reading it!

The third 3DS game that I purchased, The Legend of Zelda: A Link Between Worlds, was actually an impulse buy. At that time, I wanted to buy a game but had no real idea what to get. I decided to get a game that I knew I was going to get eventually.

The Legend of Zelda: A Link Between Worlds is the second Legend of Zelda game to come out on the 3DS. Initially, it was planned to be a remastered version of A Link to the Past, a classic game that was first released on the Super Nintendo Entertainment System. Instead, Nintendo decided to create an entirely new game. This new game is set in the same world as A Link to the Past but takes place several hundred years later. So because of that, A Link Between Worlds is both similar to the previous game. But it’s also a lot different different, due to the new elements that it brings to the Zelda franchise. 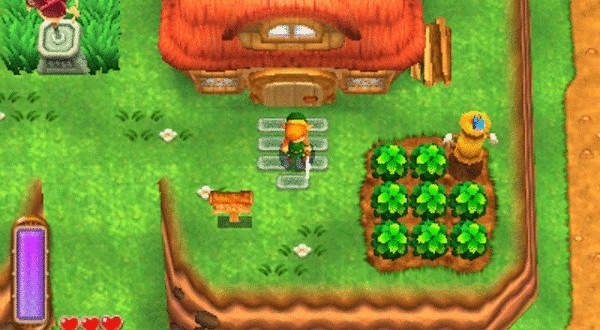 Link’s house, which is located right where it was in A Link to the Past.

In The Legend of Zelda games, you essentially have an open world that you can fully explore. However, there are some areas that can only be accessed once you find certain types of equipment. For example, a grappling hook or a hookshot to reach higher places or cross over gaps. You can find these equipment hidden in dungeons, making for a linear experience since you need to beat dungeons in a specific order.

The biggest innovation in A Link Between Worlds is that most of the equipment needed to explore the world are made available via a rental system very early in the game. This will allow you to explore as much of the world as you can from the get go. This also breaks the linearity of exploring the dungeons. And this also increases the replay value of the game.  You can take on the game’s dungeons in a different order in succeeding playthroughs. 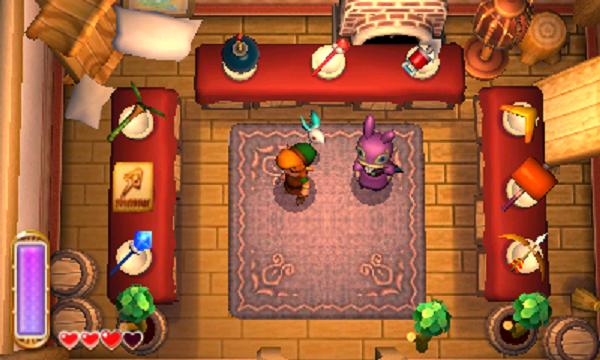 Very early on, you’ll get the chance to rent out almost any of the essential equipment.

The equipment rental system also makes you more careful with your lives. You rent the items from a character named Ravio, who will take away any rented equipment from you whenever you die. So you do feel some pressure any time you’re nearing death.

Eventually, you’ll earn enough rupees to purchase the items, but you’ll spend a significant part of the game living off of rentals. Purchasing the items will allow you to upgrade it via the Maiamai subquest. The game will throw a lot of rupees your way though. So, you’ll probably purchase at least half of the items once you’re halfway in the game.

Another new mechanic introduced in A Link Between Worlds is the ability to change yourself into a wall painting. This will allow you to walk along walls. It may sound like a minor addition, but it’s not. First of all, it makes the game feel like it’s three dimensional, putting multiple layers of depth for a 2D game. When you go into walls, the camera shifts the perspective and shows you that each area has a “height” in addition to its length and width. 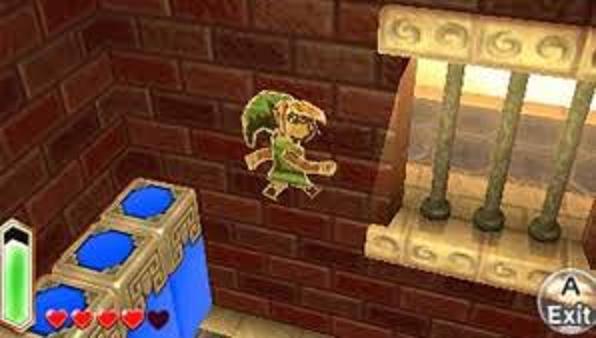 The ability to turn into a wall painting adds a new layer of gameplay to A Link Between Worlds.

Second, A Link Between Worlds was able to incorporate the ability to go into walls in varied and new puzzles. You can go through tiny cracks to move to a different room. Or, you can traverse gaps where there are no floors by moving along the wall on the side. 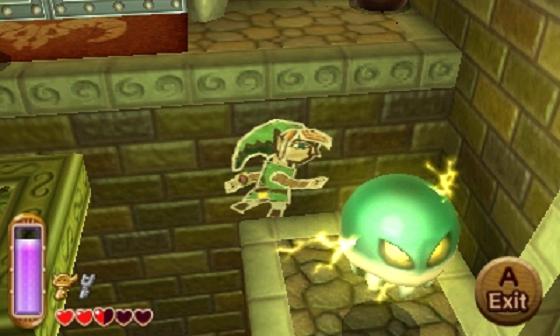 Going into walls allows Link to do a lot of things that he couldn’t do in past Legend of Zelda games.

It’s an interesting mechanic that Nintendo utilized really well in this game. It also allowed for unique dungeon designs that I liked a lot.

Great Way to Use Streetpass 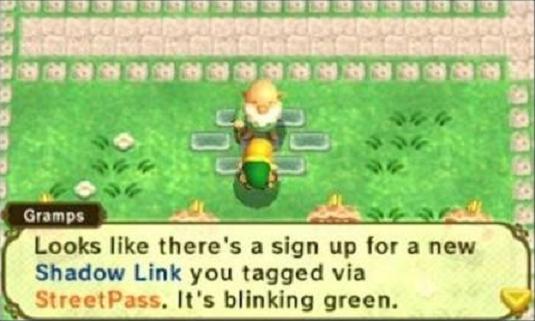 The StreetPass functionality of A Link Between Worlds gives the game additional replay value. I’ve beaten the game already but I still play it every now and then just to test my might against the Shadow Links of other players.

These “Shadow Links”, despite being limited to just two items, are no pushovers. Nintendo did a good job with the Shadow Link AI, making sure that they offer a good challenge. It’s such an accomplishment to beat a Shadow Link that’s more powerful than I am, having more heart pieces and upgraded weapons at their disposal. Winning a StreetPass battle awards you more rupees that will go towards purchasing Ravio’s items. 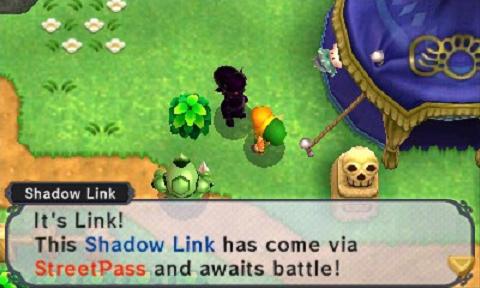 You can choose to assign two different items to your own Shadow Link. Personally, I like giving my Shadow Link two bottles of blue potion, which fully replenishes all of Link’s hearts.

This really motivated me to bring my 3DS anywhere I went. I looked forward to getting StreetPass tags for this game a lot.  I’ve even got several tags remaining. I was thinking of battling them once I start a new playthrough, but I never got around to doing that.

I’ve seen a lot of complaints about the length of A Link Between Worlds, and it does feel like a short game. I was done with my first playthrough in just under twenty five hours. That meant getting most of the equipment, the upgrades, all of Maiamai’s children, and all but two heart pieces. However, A Link Between Worlds is quite short because it does away with a lot of things that unnecessarily prolong games.

The two worlds of the game, Hyrule and Lorule, are littered with weather vanes which serve as save points. Very early on, you’ll get access to a broom that can transport you to any weather vane that you’ve already come across. This made traveling around very, very quick and effortless. The world map also gives you access to 20 pins per world, allowing you to easily mark any places that you may want to revisit later on. 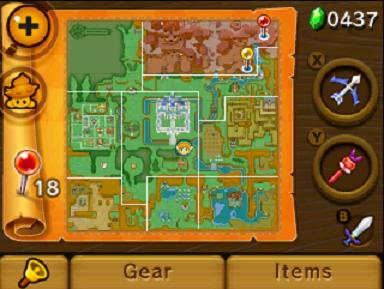 A Link Between Worlds makes good use of the second screen of the 3DS, with quick function maps and item selection.

After beating the game once, Hero Mode is unlocked, which is essentially a harder version of the game. Combined with the non-linear structure of the quests, replay value is increased somewhat. But a second playthrough doesn’t capture the same feel as a first playthrough since you already know what to do and you already know how the story is going to go. It becomes an exercise to see if you’re skilled enough to face harder challenges.

In terms of story, A Link Between Worlds still manages to add a fresh take, despite being the seventeenth game in the franchise. I don’t want to say much to avoid spoilers, so let’s just say that A Link Between Worlds introduces new and interesting characters to the mythos, and the twist at the end of the game is something that isn’t usual in The Legend of Zelda games. 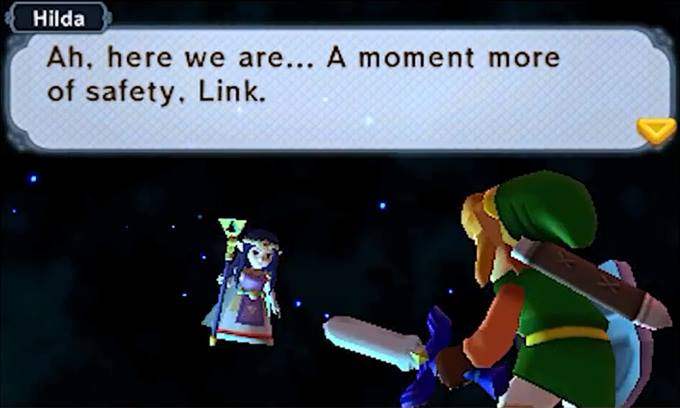 A Link Between Worlds makes good use of the second screen of the 3DS, with quick function maps and item selection.

I loved the story of this game, especially because Hilda and Ravio had more to offer. Usually, supporting characters don’t have big roles in these games. But they were quite vital to the plot, and I loved it when the game revealed what their relationships were to Link and Zelda.

All in all, The Legend of Zelda: A Link Between Worlds is an awesome game. The story serves as a good incentive to keep progressing forward, and the excellent gameplay mechanics will keep you engaged. The short gameplay (relative to other RPGs) can be a detriment to some, but the non-linear structure and the addition of Hero Mode does make the game worth playing more than once. Named as one of the “killer apps” of the 3DS and even named as Gamespot’s 2013 Game of the Year, The Legend of Zelda: A Link Between Worlds is definitely a game that any 3DS owner would need to have in his collection.

If you’d like to read about other Nintendo 3DS games, click here to check out every Nintendo 3DS video game that I’ve written about!