I wrote this post for Tales of the Abyss almost 7 years ago. So it’s not in the same style as my current posts. Nowadays, I would only write about a game after I beat it. Back then, I would write about a game while in the middle of playing it. Still, it’s neat to revisit my thoughts on this game so let me republish it. I hope you’ll enjoy reading it!

Rather than following a standard turn-based system where you assign actions to your characters like most RPGs, in Tales of the Abyss you get control one of the characters real-time. That includes running around the battlefield, jumping, blocking, attacking, and executing special moves. Battle feels almost like a fighting game or a hack-and-slash action game that involves timing and reflexes. There’s even a combo and damage counter during battle, features that you’re more likely to find in fighting games than in RPGs. 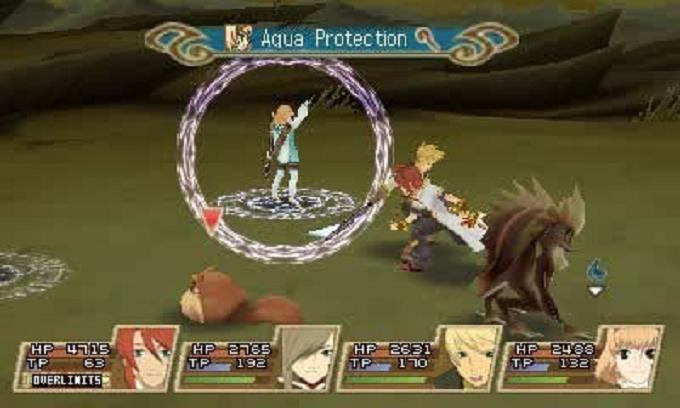 Battles in Tales of the Abyss are very action-oriented.

The rest of your team is controlled by AI, but you can assign general tactical commands to your team mates. Should they stay back from the enemies, attacking mostly from a distance? Do they spend all their energy on special moves? Are they going to attack the same enemy that you’re attacking? You can set them up on how you want them to behave. 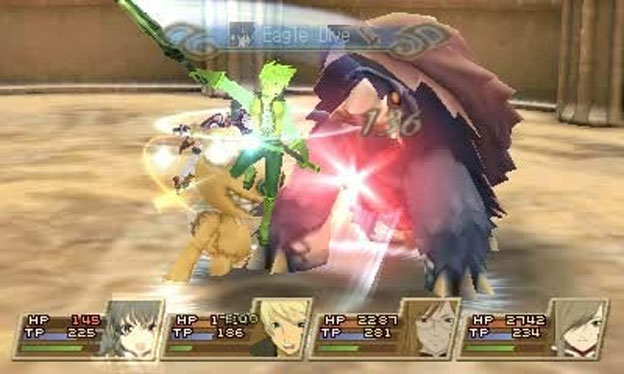 Teaming up on enemies allows you to attain more hits in a combo.

And you’re also not limited to controlling one character. There are seven total characters in Tales of the Abyss and you can have up to six in your party at any given time, with four of them active. You can opt to take control of any one of these characters, and each one fights differently from the rest.

You complete Tales of the Abyss by playing it as basic hack-and-slash, but the game offers layers of complexity for anyone who’s interested in it, such as the Field of Fonon system and the Capacity Core system.

Special moves sometimes causes an area in the field to be affected by specific elements – these areas will show up as circles with colors corresponding to different element types. For example, one of the characters may have done a Fire-type special move that generated a fire field of fonon. You can then move up to that field, use a special move that reacts to fire-type fields which will then change your special move. This system will allow you to customize your attacks, ensuring that your teammates will generate fonon fields of your preferred element so that your attacks will be stronger. 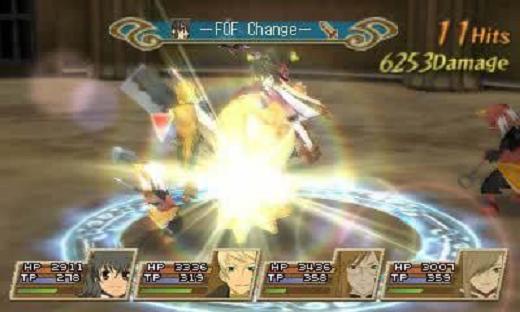 The FOF system adds another layer of strategy to an already robust battle system.

I ignored Capacity Cores during my playthrough and I don’t think it impacted my game much. In Tales of the Abyss, you can equip different types of accessories called Capacity Cores that change each characters attributes and unlock different abilities. I’ve read that you’ll need to master this in order to beat the game at higher difficulties, but I’m playing on Normal difficulty so I really didn’t need to fiddle with this.

Exploration and Use of the Second Screen

Exploration is Tales of the Abyss is what you’d expect from an RPG You explore an overworld to travel between locations, then you can explore each location on an expanded level. I have to say, the world of Tales of the Abyss is carefully constructed and really feels large-scale. The world feels realistic. The castles really feel like real castles, with a lot of different floors and rooms to get into. It’s amazing to look at, but can be quite detrimental because the game will require you to travel back-and-forth between cities and locations quite often. 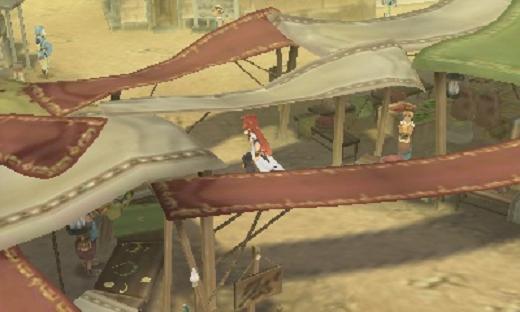 While on the overworld, your second screen serves as a map which really helped me a lot. I’ll never stop saying that I appreciate how handy it is to have maps readily available to you without having to pause the game and access a menu or have it take up space on the gameplay screen. 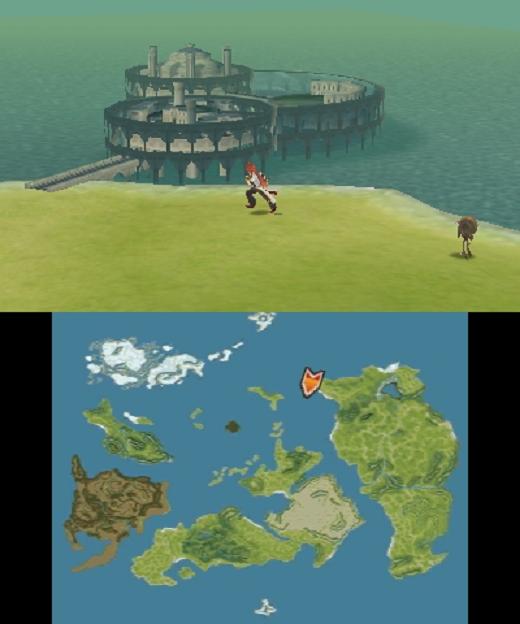 In battle, the second screen becomes an additional set of buttons that you can use as shortcuts for your favorite special moves. What’s great about this is that you can also add special moves of characters that you aren’t controlling directly. So, you don’t need to access a menu if you want one of your teammates to cast a healing spell. 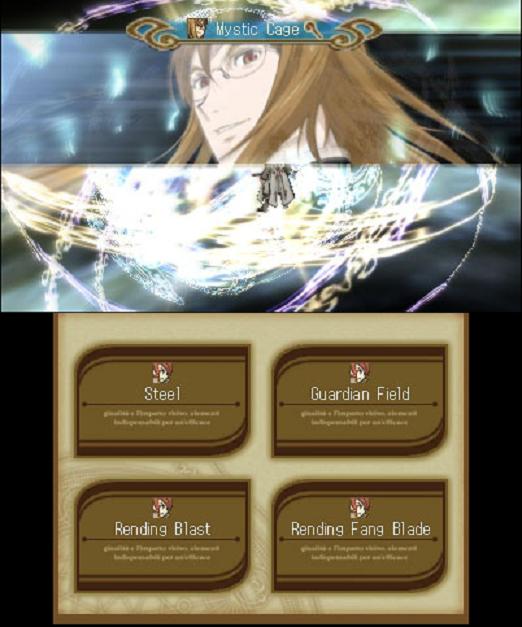 You can map your favorite special moves and spells to the touchscreen shortcuts for easy access during battles.

These are really good ways to use the second screen of the Nintendo 3DS. They make it much easier to play the game. I really miss having a second screen for video games.

As I mentioned previously, story plays a big role in RPGs. The story is what keeps you running around, doing battles hundreds of times. Tales of the Abyss has an epic storyline that’s really quite engaging. Your characters are brought together by unusual circumstances and initially, they’re working together to prevent war from breaking out between their two nations. This quest gradually changes. Suddenly, the group will find themselves in the middle of a bigger conspiracy, and the stakes become higher. Don’t take my word for it though. A twenty six episode anime series was produced as an adaptation of this game. See, the story was so good that they decided to create a cartoon series about it. 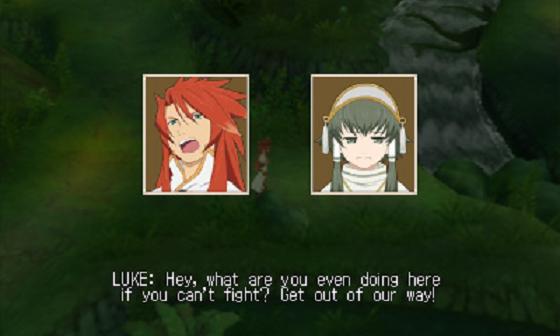 Tales of the Abyss also has skits like the other Tales games. Unfortunately, these are text-only on English releases.

Even with a good story, pacing can make or break how a story unravels. I’m glad to say that I like the pacing of Tales of the Abyss. The storyline is always progressing, the plot is always moving forward. I also like how each of the main characters have their own motivations and issues. In particular, I was able to relate to the main character’s identity crisis and longing for a sense of purpose. I’ve played a lot of Tales games in the past and I can say that I like the cast of Tales of the Abyss most compared to the previous games.

I have to mention the voice acting of this game, which is excellent. It really gives the game a lot of flavor. Most of the cutscenes have voice acting and it makes going through all that lines of text worthwhile. I thought that the voice actors were a good match to the characters they were playing.

This voice acting isn’t limited to cutscenes and story dialogue. There’s a lot of voice acting during battles as well. The necessary grunts and groans when attacking or getting hit are there, plus all of the characters yell out the names of their special moves when attacking. Characters will say something whenever their health becomes too low. They ask for permission whenever they use items from your stash of supplies. All the talk adds to each character’s personality and makes them more memorable for me. And it does help make the battles even more engaging.

Tales of the Abyss, despite being a port of a game that was released back in 2006, is a very good RPG. You get the same scale and heavy storyline but a different gameplay feel due to the linear motion battle system. Any RPG fan who has a 3DS and missed this when it first came out should definitely consider getting a copy of this. I enjoyed the game a lot, despite being on an underpowered handheld device.

If you’d like to read about other Nintendo 3DS games, click here to check out every Nintendo 3DS video game that I’ve written about!