When my nephew got his Nintendo 2DS unit and borrowed a copy of Mario Kart 7, I knew I had to have my own copy of the game, and I’m going to talk about why. 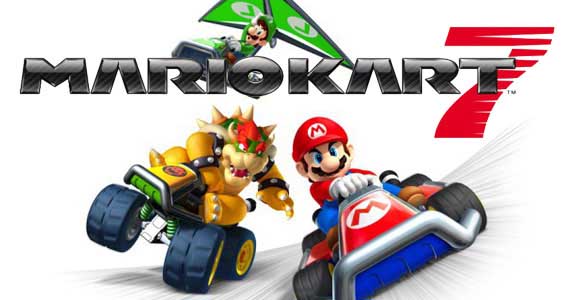 How many video game characters/franchises do you know can hop across different types of games and still be successful? Nathan Drake Racing? Kratos God of Tennis? Lara Croft Party?

The core racing engine incorporates several new and returning mechanics. As an expansion to choosing different vehicles in Mario Kart Double Dash!! and Mario Kart Wii, Mario Kart 7 has a kart customization system that allows you to choose from different karts, wheels, and gliders (yes, gliders). Each part has it’s own Speed, Acceleration, Handling, Weight, and Offroad rating. Combining these with the different character weight classes allows you to  tweak your vehicle to what suits your driving style the best. Some people have excellent control and can afford to lose a little bit of handling as they can compensate for it, instead going for maximum speed and acceleration. Other people may prefer heavier characters and vehicles, allowing them to crash into other karts and bully their way to victory. 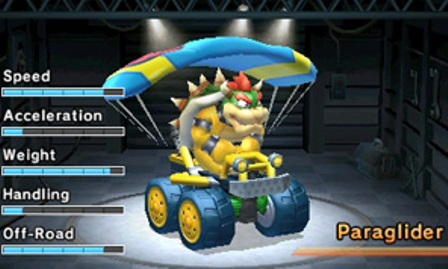 Bowser is sacrificing Acceleration and Handling for higher Speed, Weight, and Off-Road ratings.

Some racetracks will force players to go underwater or be launched in mid-air. Being submerged in water changes the physics of the game – players will have to adjust how they drive accordingly. 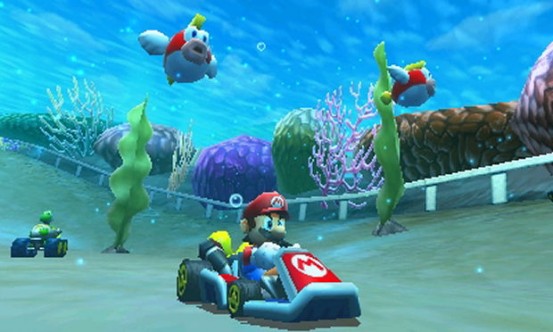 The underwater portions make players change the way they drive.

Gliding has a bigger impact in the racing mechanics. Staying in mid-air actually makes you move faster and allows you to take short cuts that you normally can’t take. Finding the right technique in increasing your lift, and knowing when its time to land will be essential to winning, especially when racing on the higher difficulty modes. 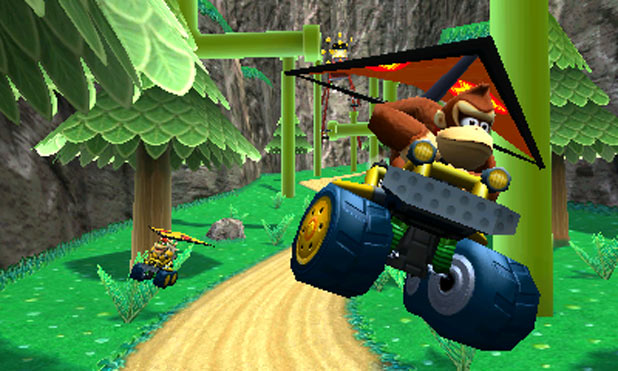 Its a wonder how that glider can hold a big ape like Donkey Kong, riding a heavy-looking vehicle, up in the air.

Mario Kart 7 also makes good use of the 3DS’ touch screen by showing a clear picture of where you and the other racers are on the track, what each racer’s current standing is, and what items they’re holding, if any. A feature that was first introduced in Mario Kart DS, this adds a lot of strategy to the game. I’ve personally used this feature to much success, something that wasn’t available in previous Mario Kart versions. 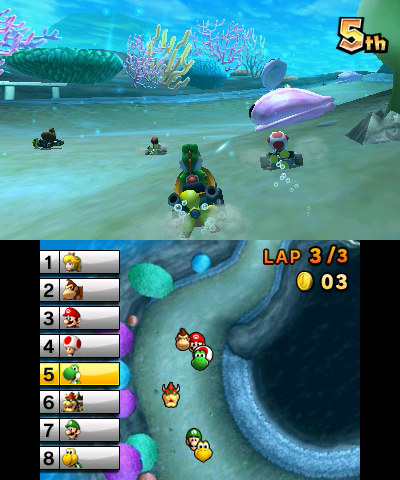 Yoshi knows exactly how far he is from the racers that are ahead. Peach is nowhere to be seen – she must be really far ahead of the pack.

Nintendo also brought Coins back – you can collect up to a maximum of 10 Coins per race, which gives you a boost to your maximum speed. The game also keeps track of the coins that you collect after every race, which is then used for unlocking the different kart parts available in the game.

Finally, Mario Kart 7 allows you to use a first-person view when racing. While in first person mode, you can actually use the gyroscopic controls of the 3DS device to steer your kart. This replicates the motion controlled driving feature first popularized by Mario Kart Wii. 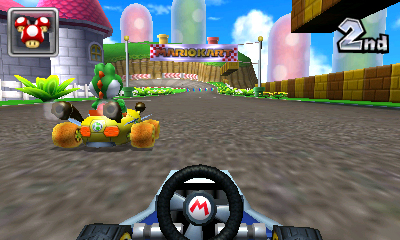 It takes some getting used to, but the handling is still crisp if you use the gyroscopic controls.

Mario Kart 7 can be played solo or as a multiplayer game, and there are many different modes to choose from. Some are racing modes like the main Grand Prix mode, the VS mode, and Time Trials, while others are battle modes like Balloon Battle, and Coin Runners. 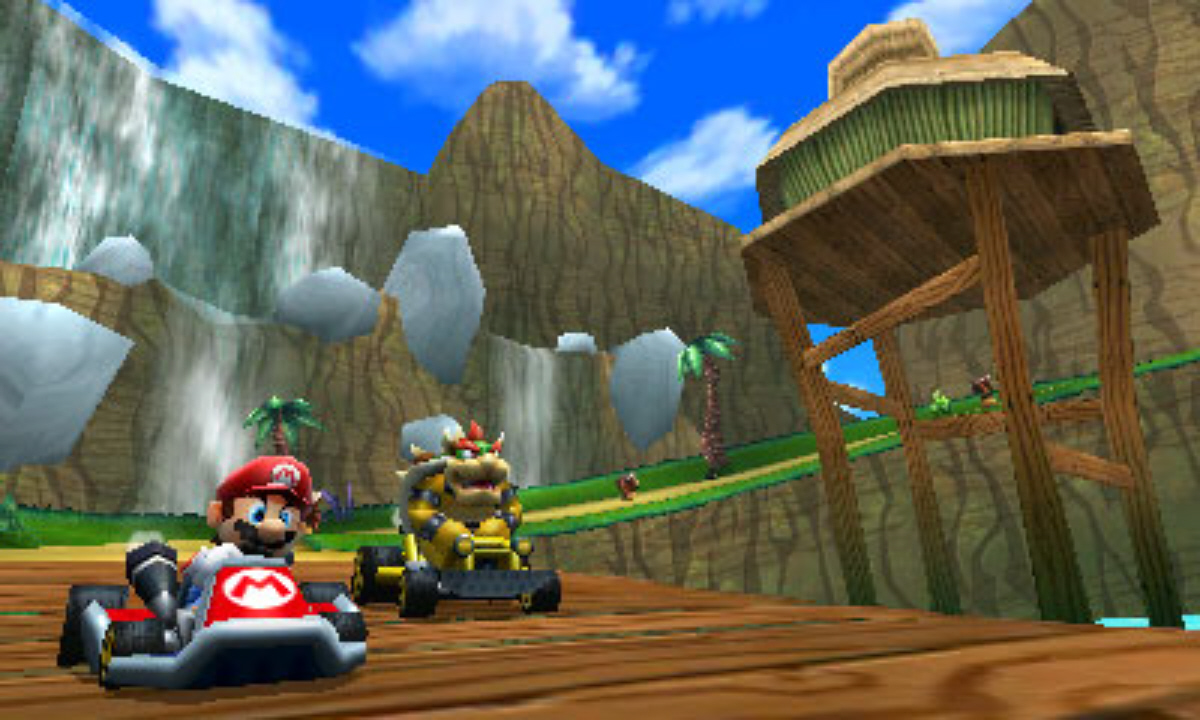 Mario and Bowser, side by side, settling their differences on the racetracks.

In Grand Prix mode, you have a choice between 8 different cups to race for, each with 4 different tracks and four different levels of play. 50 CC is considered to have an Easy level of challenge, 100 CC is equal to Normal or Average, and 150 CC is Hard. At the beginning, you’ll spend most of your time with Grand Prix as you’ll get to unlock additional characters for every cup you beat at 150 CC (there’s a total of eight locked characters). Once you’ve reached first place on all 8 cups in the 150 CC mode, you get to unlock a special difficulty called Mirror Mode where you still race at the same 150 CC but all tracks have been reversed (hence the term “Mirror”). You can play Grand Prix mode alone or via local multiplayer, and what I like about this is your achievements in local multiplayer (getting a first place 3 star rank in Mushroom cup for example) carry over the single player game.

Time Trials is a mode where you can select a single track and try to race on it alone. The game keeps track of your best times per track, and provides a “ghost” that you can race against. Some of these ghosts are built in the game, provided by the game’s developers, while others are obtained via Street Pass or Spot Pass. Replacing the Time Trials in local multplayer is another racing mode called VS mode which is still a racing mode but allows more customization such as choosing how many tracks to race on, the difficulty of the AI-controlled karts, and so on. 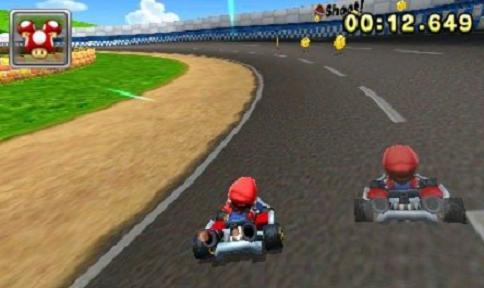 You can learn a lot from the game’s ghost data – in particular, the shortcuts for each track.

Balloon Battle and Coin Runners are similar modes that do not involve racing. Instead, players drive around arena-type courses, trying to either eliminate other players by popping their balloons with the help of the different items available or collect and retain as many coins as they can by the end of a round.

It’s in the online multiplayer mode where Mario Kart 7 truly shines in my eyes. First, you get to choose between playing a game with a registered friend, a “Community”, or pick the Worldwide option (which means anyone who’s currently online). You can either race or play Battle Mode when you choose Friend or Worldwide, but if you decide to race, rather than go through an entire cup, you instead race on individual tracks (each player gets to vote for his/her desired track before each race). Whenever you participate in any Worldwide games, you earn VR points based on how you do – your VR standing then becomes the basis for matching you up with players that are on a similar ranking in future races.

Communities are special groups with their own “rooms” – only those who know the community code can go into the “room”. Each Community group has their own settings as well. For example, you may be able to find (or form) a community where your races won’t have any items, which is perfect for players who just want to test their driving skills and don’t want to deal with the randomness of items. Each Community keeps it’s own leaderboard as well, so you can see how you’re doing against the rest of the Community members. 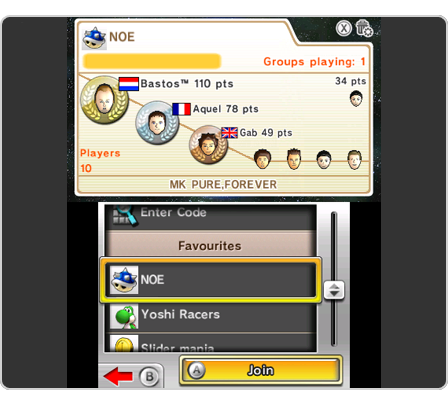 Race against your friends, even if they’re in different parts of the world!

This game is definitely a must-have in my opinion, even if you’re not a fan of racing games. The game is simple enough to avoid alienating casual gamers, and yet the technical aspects of the racing mechanics are deep enough for veteran racers who are looking for a challenging game. It passes the girlfriend/wife test – this is the only game that I have that my girlfriend enjoys playing at the moment, and you know what? I enjoy watching her play – it’s that entertaining.

The multiplayer modes, to me, are the game’s main selling points – I can meet with my friends who have their own 3DS units and play Mario Kart 7 with them even if they don’t have their own copy thanks to the game’s Download Play feature, or I can go online at any time and find people around the world to race against.

If you have/own a 3DS, I’m sure you already have a copy of this game. If not, what are you waiting for? Go get a copy pronto!