I wrote this post for Batman: Arkham Origins Blackgate almost 7 years ago. So it’s not in the same style as my current posts. Nowadays, I would only write about a game after I beat it. Back then, I would write about a game while in the middle of playing it. Still, it’s neat to revisit my thoughts on this game so let me republish it. I hope you’ll enjoy reading it!

One game franchise that I’ve never been able to play is the Batman: Arkham series. These games have been mostly limited to non-Nintendo consoles. So one of the first games that caught my attention when I first got my 2DS was Batman: Arkham Origins Blackgate. I finally got a copy last month, and was able to play the game recently.

Batman: Arkham Origins Blackgate is a standalone game with a plot that is set right after Arkham Origins and before Arkham Asylum. The premise seems to be a retread of Arkham Asylum, in that criminals have taken over an institution for holding the said criminals. This time around it’s Blackgate Prison that has fallen. And the Penguin, the Joker, and Black Mask each have carved out their own territories from within. It’s up to Batman to retake the Prison and recapture all of the criminals involved.

Batman: Arkham Origins Blackgate is a platform game that utilizes Metroid-style platforming elements in that you’re given a location that you’re free to explore as you wish. However, it has areas that are only accessible once you’ve found the necessary equipment. Unlike Metroid or Castlevania games, Arkham Origins Blackgate is a 2.5D platform game where areas are presented as three dimensional locations rather than two dimensional areas where you can only travel up/down and left/right. While your movement is mostly limited to the four directions, sometimes you can move into the background or foreground via a vent or a crawlspace. 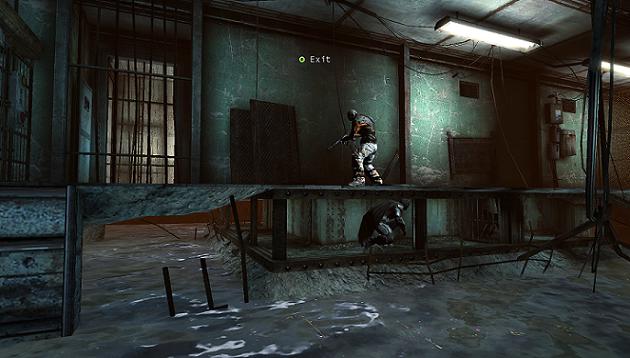 The backgrounds and stages are very detailed, making them look like real locations.

Visually, it worked really well for me. Even if I was only following a linear path, it felt like I was exploring an actual three dimensional prison as opposed to a flat environment. However, this made exploring a little confusing sometimes. It’s not always clear where you can and can’t go. I guess the developers of Batman: Arkham Origins Blackgate realized this because they placed indicators all over the stages, showing spots where you can exit, climb, or grapple. Normally, I hate these types of indicators in games as they make me feel like my hands are being held for me. But in this game I can see why they’re necessary.

The Map on the Second Screen

Like most Metroid-style games, Batman: Arkham Origins Blackgate also comes with a map screen. The 3DS version has the map displayed all the time on the touchscreen. I’ve always liked this feature of several 3DS games and this is no exception. Having the map shown all the time is very helpful, especially in a game that involves quite a lot of exploration and backtracking.

However, the map in Batman: Arkham Origins Blackgate is shown from the top and consists of a single layer instead of being three dimensional. A top view perspective would have worked fine if the map consisted of several different “pages” to accurately show you the different floors and where you are exactly. But here, the map is just one page, so you can’t really tell which floor you’re on from the map. 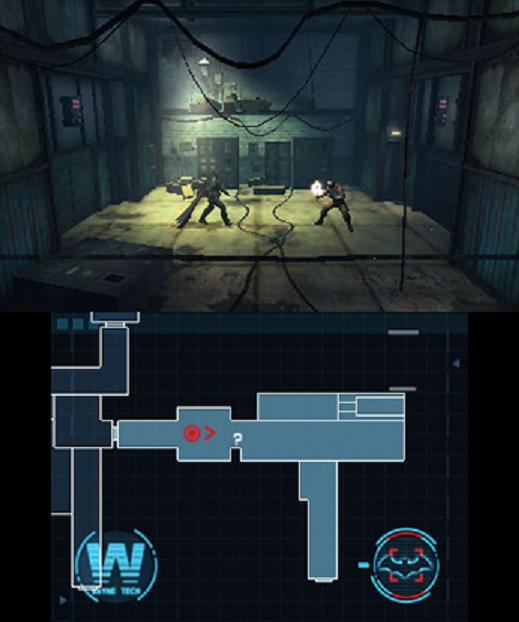 I’m really getting used to having a map shown at all times when playing. Ahh, the benefits of having two screens.

The three dimensional environment, two dimensional movement, and flat map all combined for some really confusing moments. One time, I ended up spending more than an hour trying to get to an area that I’ve already passed but needed to get back to. I couldn’t figure out where the entrance to that area was. I kept going back and forth between different floors and almost thought that I wouldn’t be able to get back to it. What happened was, I was missing a path that looked like a dead end because the path actually turned a corner going into the foreground. You’ll really need to pay attention to the background details to avoid getting lost.

Metroidvania-like and the Detective Mode

Keeping true to its Metroid-style of gameplay, you’ll also discover areas that you won’t be able to get to until you’ve gotten the right equipment. Unlike Metroid or Castlevania though, Batman is limited to equipment that someone like Batman can be expected to have. So there’s no ice beams, no turning into small animals, no gaining flight here. What you can get are specialized Batarangs, upgraded grappling hooks, and other Bat-gadgets. 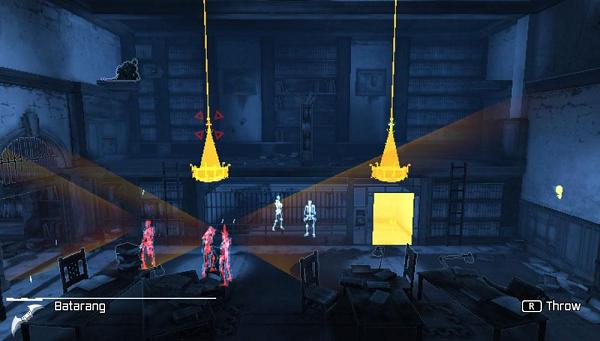 Detective Mode allows you to see the world as Batman sees it.

Batman: Arkham Origins Blackgate also has a feature called Detective Mode, which allows you to take a different look at the environment. In this mode, you can see enemies and their line of sight, terminals that you can hack into, and walls that you can blow up. A little downside to Detective Mode is that you’ll often need to be in Detective Mode before you can progress, and it can get a little tiresome. You can’t simply blow up what obviously is a weak wall that’s meant to be blown up without analyzing it through Detective Mode first.

Batman: Arkham Origins Blackgate employs simple beat ’em up mechanics for it’s combat system. Batman is limited to one Attack button, a Counter button, and a Cape Stun button. Despite this limitation, Batman actually has a lot of different ways of attacking and countering. The game automatically decides how he attacks. It might seem too simple, but I think this was a design choice to ensure that combat would look pleasing visually, and it does.

When you chain two attacks together, Batman would transition smoothly from a kick into a punch. Throw a counter in there and there’s no skipping in the animation. Batman would stop in mid-punch, move his arm behind him in a blocking motion, and once the opponent lands his attack Batman would immediately counter-attack with a logical move. And because of the simple mechanics, combat felt really fluid and natural. 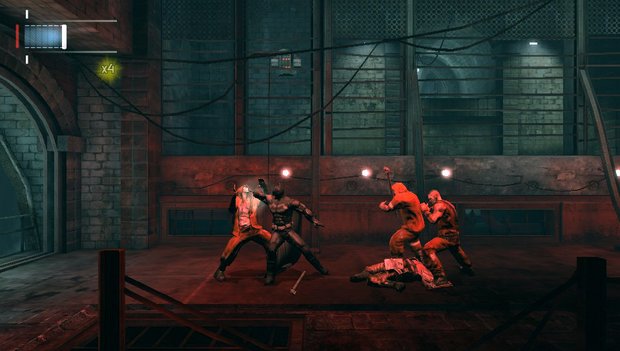 The combat system is simple, but looks and plays really well.

The opponents in this game are also limited to different kinds of inmates. Each are clad in a costume that indicates whether they’re working for the Joker, Black Mask, or the Penguin. Most of them are unarmed, but you do come across several with different melee weapons and assault rifles. The lack of variety can make the experience feel a little repetitive at times.

What Batman: Arkham Origins Blackgate lacks in the variety of regular opponents that it throws at you, it makes up for in the boss battles, which are amazing. You get to fight some of the most well known characters in Batman’s rogues gallery as bosses here. In addition to the aforementioned three villains, Catwoman, Deadshot, the Bronze Tiger, and even Solomon Grundy makes an appearance. 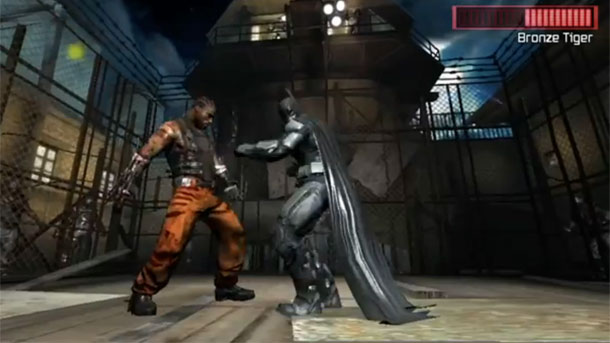 The boss battles in this game are so good, I wouldn’t mind playing it again just to experience these battles again.

These boss battles are designed in such a way that each boss would fight like how they would in the comic books. They’d  effectively use their talents and abilities in how they fight. Beating them also ties into the source material, as you would need to do how Batman would’ve handled each of these characters in combat. The boss battles are among the game’s best highlights for me.

After playing the game, I could see that the design choices were made to ensure that Batman: Arkham Origins Blackgate made you feel like you’re in Batman’s world. Everything just works. The way the environments were designed and presented, the combat mechanics, and the different boss battles and how they flowed. Wrapping this all up are excellent looking cutscenes and really good voice acting throughout the game. Each of the voice actors fit their characters really well.

It even has an additional feature where Batman has “cases” that he can solve by discovering clues scattered across Blackgate. Through this, you’ll see how the Joker was able to take control of his part of the prison. You’ll learn why Black Mask was there and what his plans were. And you’ll discover what Solomon Grundy was doing in Gotham City. Of course, I don’t think you can really represent Batman’s deductive ability via gameplay mechanics. This was a good enough representation of how Batman uses clues to piece together a story. 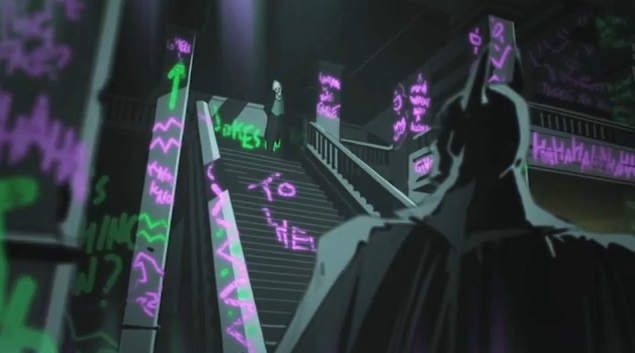 This game is a little short though. I managed to beat the game with a 90% completion rate in under 13 hours. However, the designers put in secret endings to encourage multiple playthroughs. The three main villains can actually be beaten in any order. Depending on which one you take on last, you end up with that character’s secret ending. In order to see all three secret endings, you’ll need to beat the game at least three times. The game comes with a New Game Plus mode wherein you can get to keep previous achievements that you’ve unlocked in your first playthrough to make it a little less tedious though.

Despite the flaws that I mentioned early on, I really liked Batman: Arkham Origins Blackgate. I think it’s a shame that this game keeps getting overlooked because of the more popular 3DS games available. This also keeps getting compared to other Batman: Arkham games that came out on home consoles. Obviously, those are better games simply because they were made for consoles that are more powerful than the 3DS. Let me mention though, that a Deluxe Edition of this game came out for home consoles. This shows that the game is good enough and that it deserves it’s place in the Batman: Arkham franchise.

Right now, I’d say that this is the best comic book character-based video game that’s available on the 3DS. So if you like comic books, you should give this game at least a try. This is definitely a must have for any Batman fans who also own a 3DS. I don’t regret adding this game to my collection, and I’m looking forward to playing this again soon.